Earlier this week I had nasal surgery.  And I'm sure when I've said this some people may assume it's a cosmetic or elective procedure.  False.  As much as I wish I had thousands of dollars lying around to shell out on why not! surgical procedures (even though I never would spend extra money on that...I'd probably by another iPad or some Apple stock--cause did you see Apple has more money than the US Government?!!), this was a very much needed surgery for me and my sinuses.

My mom had this same surgery done many years ago, and over time it looked like I acquired her same sinus passages: allergy-ridden and deviated.  So after many bouts with different medicines and nose sprays didn't work, and a CT showing that my nose was indeed not in the straight form it should be, my doc decided it was time to have a Septoplasty, or fix my deviated septum.  He thought this would help with my nasal troubles and alleviate some of my allergy woes that were seemingly made worse by a crooked nasal passageway (which in turn forced my nose/breathing abilities to work extra hard to try and get air through). 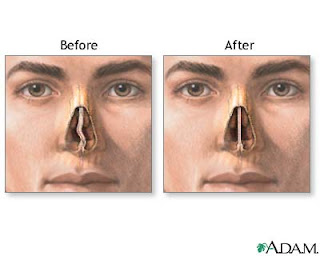 This past Monday Mike graciously took a couple days off so he could take me to my surgery and be there for me when I recovered.  He's such a thoughtful gentleman, isn't he?!  He's definitely a keeper.  Anyways, the surgery went well--took a little longer than expected (almost 2 hours) because my doctor said my nose was "worse than he anticipated" and they had to do some extra repairs while they were up there.  But, he said, they did get to everything and doesn't expect to have to go back in again.  Whew!  That's a relief...but now I'm definitely feeling those "extras" that he did up there.  Hello nasal pain!  Ouchies!!

I've been asking myself since Monday WHY anyone would CHOOSE to have cosmetic surgery, especially on their nose/face if they didn't absolutely need it.  This recovery sucks.  My head feels like it's 1000 pounds, my cheeks, upper lip, gums, and nose all feel super swollen, I still can't breathe (yet) because of the dried blood and stitches that are in my nose, and with the pain meds I'm on it makes all that's going on around me feel very dizzying.  I guess some people will go to any length--including pain and torturing yourself--to beautify their face.  I just have a hard time seeing why someone would go to this length for their appearance.  Me, on the other hand, had no problem taking on this pain...as much as it sucks, I know it's going to pay off.  I'll be able to breathe!  And this is something I hope will lead me to a healthier, happier, and longer life.

So here's hoping for a quick-recovery for my nose and sinuses...feel free to send good healing thoughts my way!  They'll be gladly accepted! :)
Email Post
Labels: nose septoplasty septum surgery