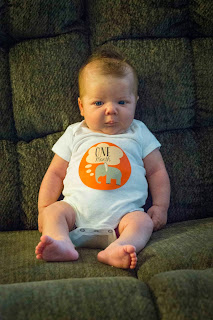 Seriously.  How has it been a month already?!!! I cannot believe it--I thought time flew by past with Patrick, and now, with 2 little pickles, it is flying by even faster.  Kenny Chesney is right: Don't Blink. 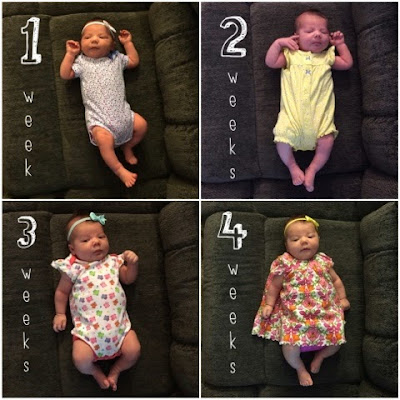 So Miss Rosie is ONE MONTH OLD!  I've actually been taking weekly pics (#GrowRosieMGrow on Instagram) so it's been fun documenting her weekly growth on the couch...& then doing her monthly onesie stickers as well.  Which, if you remember from my monthly pics with Patrick, I did two different locations for those--um, no way Jose, not doing that this go'round.  She'll have her weekly AND monthly pics on our new couch.  I don't have to fuss with two locations, backdrop blankets, or anything.  Trying to keep it easy peasy this go'round. 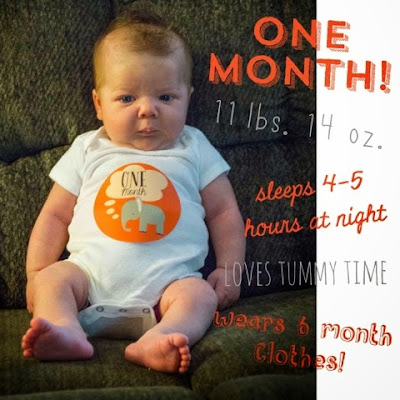 We have her (& Patrick's 2 year) check-ups tomorrow morning, so I'm sure there'll be another fun little post about that as well.  BUT!  Fear not! I have a fun little post here NOW for you all about Rosie at one month old.  Try and contain your excitement.


I'll end with a little comparison pics of her "Brand New" pic and her one month pic side by side. 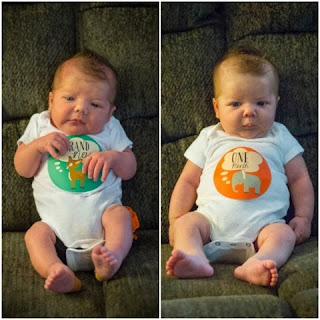 Wow.  She really has grown SO MUCH!  As much as I hate how fast it's going, I am so excited to have a little girl and watch her grow up and do all of the fun mommy-daughter stuff I got to do with my mom!  I can't wait.

Okay, okay, twist my arm...here's Patrick at one month and Rosie.  SOME similarities, but more differences I think!  Patrick was 12lbs 13oz at a month and Rosie is a pound less than that at 11lbs 14oz (BUT! she was 1.5 lbs lighter at birth, so it looks like she's gaining faster than he was, right?!  I'm not good at math). 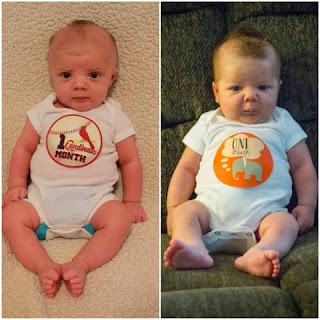 Anyways, that's all I've got for Miss Rosie at 1 month old.  Until two months (which hopefully doesn't come as fast as 1 month did!), adios!