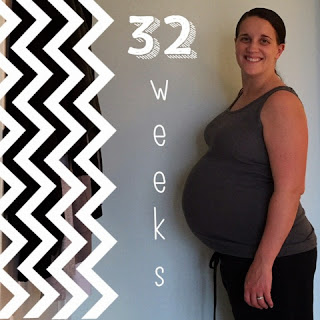 Wowza.  Less than 2 months away until d-day! (or c-day, I guess?!!)  Anyways, getting more and more excited each and every day!  And even crazier to think about that I only have 5.5 weeks left of school before this kid is hatched!  Nuts! 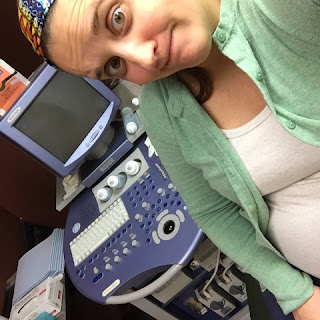 So I had my 31 week appointment at my OB earlier this week.  I only have 5 appointments left until he/she is here!  I can't believe that!  Anyways, so at my appointment they overbooked the exam rooms, so, as pictured above, I got my exam in the ultrasound room...which turned out to be a bit of foreshadowing.  Everything went well with my exam--normal blood pressure, active little babe in there, and heart rate in the 150s.  However, when she measured my belly, I was measuring at 34+ weeks--a 5 week jump from the 29 weeks I was at at my last appointment.  Holy moly.  That's a big jump!  So my doc said I needed to add on a growth measurement ultrasound at my next appointment in two weeks to check on this babe's size.  I would like to point out when I was 31 weeks with Patrick that's when everything "hit the fan" (not really, but became a little more interesting!)--my blood pressure was up, babe started measuring way big, and I was completely and utterly exhausted and had constant back pain 24/7.  Although I don't have most of that now, it seems that 31 weeks is the magic number with Mooney babies where they have a massive growth spurt and turn in to gigantors in the womb.  Curious to see how big he/she is measuring at my 33 week ultrasound. 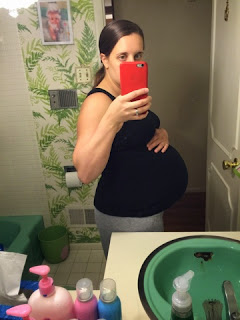 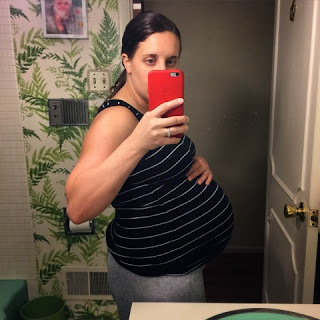 So, with that said, it's week 32 here and I am feeling really good.  I mean, despite feeling large and in charge, I haven't had hardly any back pain (just when I've been standing too long) and overall really feeling awesome.  Even on Monday after walking over 5 miles (my GPS log was wrong on my phone--Mike's was right, and more accurate since it was in his pants pocket all day and mine was in my jacket) at the Beggin' Pet Parade the day before, I felt great--well, nothing was hurting :)  Anyways, I know, cause everyone tells me all the time that each and every pregnancy is different, but boy, they are right.  Patrick's and #2's pregnancies have been night and day different.  So crazy.

My idiot self did slip off a chair earlier this week while changing a projector bulb at school (no, I didn't fall off the chair; my right leg was on the ground already and my left one just "slipped" off of the chair and whacked it before it hit the floor).  So right under my left knee on the side of my leg I have a massive lump and bruise.  Doesn't it look nice?!!  Very colorful.  It hurt like hell when it happened, but definitely has gotten better over the past couple days (thank you Tylenol!).  Mike side-eyed me when I told him what happened (probably because when I was 35 weeks with Patrick I fell down our entire flight of basement stairs and had to spend 6+ hours being monitored in labor and delivery--everything turned out fine by the way).  Anyways, I really need to remember that I am 8 months pregnant and carrying another person and be more careful and probably not stand on chairs to fix things high up.  I'm taking my own advice and side-lining myself until after #2 gets here. 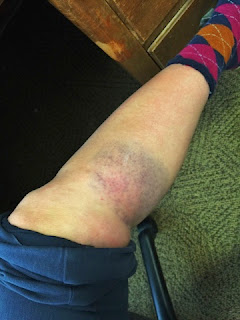 Despite this babe taking after his/her older brother and measuring big, I am still thinking it's a girl.  I just make big babies I guess!  Either way, come d-day I will be excited whatever this little babe comes out to be.  Until week 33, adios!
Email Post
Labels: 32 weeks baby #2 baby Mooney documenting the bump pregnancy