A Bean Burrito and an Enchilada

My good friend Lauren recently commented about how I always refer to my children as Mexican food dishes...and you know what?! She's totally right.  I do, I so do this...ALL THE TIME.  But you know what is funny about Mexican food?  Every dish is so different, yet, it's the same because it is Mexican after all!  Kind of like my little churros down there: so different, yet so similar. 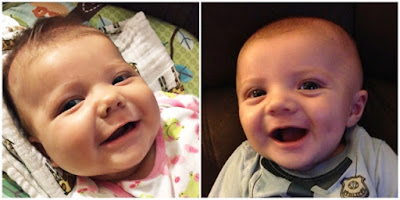 Therefore, I wanted to write a post about my little bean burrito and enchilada and how they are so similarly different (see what I did there?!).  I always assumed after Patrick once we had another kiddo he/she would be JUST LIKE HE WAS.  I know each kid is different, but just KNEW ours would be the same, despite what everyone tells us.  HA!  I'm laughing at myself typing this.  Oh, how naive I was!

So I'm taking to my blog to document some similarities (they are siblings! SOME.THINGS. are the same!) and oodles of differences between my two little tacos.  Enjoy. 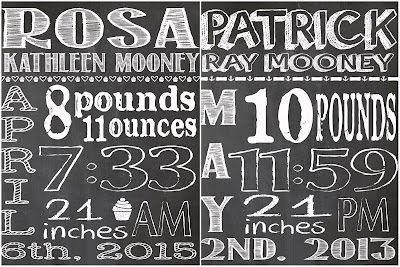 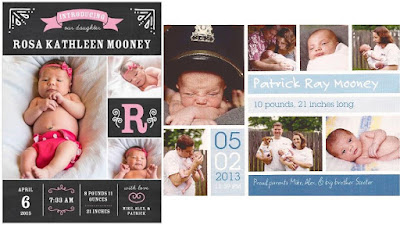 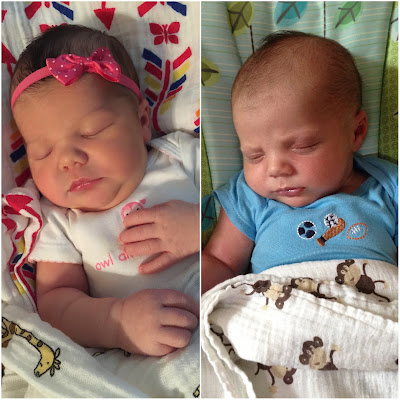 We're gonna start with the most obvious one here--the thing all parents worry about: sleeping habits of their offspring.  We hit a bottom-of-the-9th-game-7-grand-slam-to-win-it-all with Patrick.  This kid was (and still is!) an amazing snoozer.  He's always gone down for nap/bedtime wide awake and soothed himself to sleep.  He started sleeping 9pm - 5am at 3 weeks old (!!!) and then at 8 weeks old went 9pm to 9am and never looked back.  I can count on ONE HAND the time since he was 8 weeks old he's woken up in the middle of the night--he's THAT GOOD of a sleeper.  And always, even when he was wittle, has woken up happy and blabbering--never crying.

Rosie on the other hand is no Patrick.  Don't get me wrong, girlfriend sleeps pretty darn good, but at 10 weeks old, she's still waking up once between 9pm and 8am (usually sometime in the ballpark of 3am-5am), and is hangryyyyy when she wakes up and is usually angry angry angry screaming for me and/or crying.  Once she gets some boob juice in her she's totally fine, but definitely more drama llama filled than Patrick ever was. 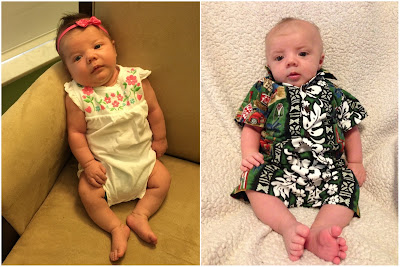 All kids eat, regardless of if they are siblings or not, so Rosie and Patrick would have to be similar, right?!  WRONG.  Don't get me wrong though, both of my kids have loved their mama's milk and have had no problem sucking it down, but the means in which they are doing it have been vastly different.  Patrick nursed fine from the get-go, but about 2 months in he definitely preferred the bottle over the boob.  This was largely due to the fact that he was getting several bottles of pumped milk a day (because I didn't want to breastfeed him (embarrassed to potentially have a nip slip!) in public so a bottle was easier) and, babies realize this quickly, the milk comes out faster from the bottle than the boob.  With Patrick too I was so concerned about "keeping a feeding schedule" and making sure to feed him on the dot every 3 hours, and not too much before or after.  I also dumbly thought, "Well I just pumped an hour ago so I definitely don't have enough milk {wrong} to nurse him now, so he gets a bottle."  Patrick much preferred the bottle (and took it like a champ!) seemingly from day 1.

With Rosie she's the complete opposite.  We've given her a bottle almost every day since the day she was born--just so she recognizes a bottle and therefore we weren't tied to always having to take her with us/be back home within a few hours if Mike and I wanted to escape.  However, she does not like it.  Most of the time (she's getting better though) she chews on the bottle nipple and fake gags on it, not wanting to take it.  Rosie prefers to nurse ALL THE TIME.  And with her, I don't care if I have a nip slip in public--I'm feeding my kid.  If someone has a problem with that, I have a few choice words I'd be happy to share with them.  I've fed her (and most of the time without a cover, cause it's so blasted hot out) in more public places than I'd ever even took Patrick to when he was a baby.  Girlfriend likes her milk directly from the source. 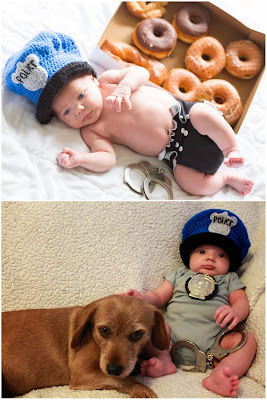 Babies have opinions from the get-go.  Don't think they do?!  I beg to prove you wrong.  Let's start with our first born.  Patrick, from the day we got home from the hospital, slept--and loved!--the Rock and Player sleeper.  He slept like a dream in that thing--and even when we moved him to his crib at 10 weeks old we elevated his mattress to mimic what he'd been sleeping in the past 10 weeks of his life.  I {stupidly} assumed Rosie would love it too--cause Patrick did, and babies will like what you condition them to like.  Right?!  WRONG.  So wrong.  She HATED the Rock and Play.  For several days once we got home from the hospital that's where we put her for bedtime and it was awful.  I'd have to either put her in asleep, or lay there half-asleep myself and rock the darn thing until she stopped crying and fell asleep.  It.was.awful.  And so different from our gem of a sleeper Patrick!  Mike suggested trying the Pack and Play instead to see if she slept better/liked that, and wouldn't you know it?!  She did!  No more crying when she was set down in it, no more rocking her to sleep, and as soon as we put her in the Pack and Play she was giving us longer stretches of sleep.  This also made for a seamless transition to her crib at 9 weeks old too!

Rosie LOVES being held, snuggled, and worn in the Tula baby carrier.  Patrick, eh, not so much.  He has never (still isn't!) been a snuggler, and definitely wasn't when he was a baby.  You could set him down pretty much anywhere and he'd be content as a little lamb.  Rosie, on the other hand, definitely prefers to be held in someone's arms and doesn't fancy much (although as she's getting older she's getting better) being set down.  When she is set down, she likes to be flat (like on the ground) and isn't too thrilled about her little bouncy seat thing (that Patrick LOVED!--although she's finally warming up to that too). 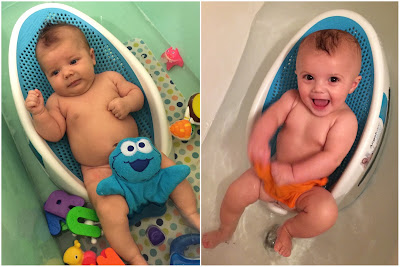 Both of my kids must have some sealife blood in them, because they both LOVE baths (and any water, actually).  I guess a lot of babies hate the water, especially when they're little?!  Not mine.  They both absolutely LOVE it.  Both of them love having water poured over their heads and face, love splashing in the tub, and would stay in there all night if I let them.

Patrick took swim lessons at 8 months old and I think that really enhanced his love for the water (going to the pool is his favorite thing EVER), and we are going to do the same thing with Rosie when she's old enough.  These little fishies sure love being in their natural habitat! 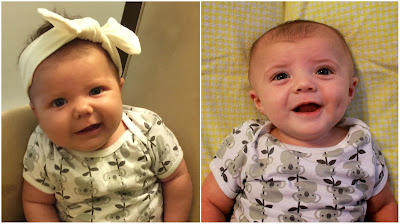 Okay, one's a girl, one's a boy...so obviously they're different in that regard.  BUT!  Every time I look at these two (or Rosie as compared to Patrick's pics at that age) I'm torn: I think they look exactly alike one minute, then the next I think they look nothing alike!  Ha!

One thing is for sure though: they both look JUST LIKE their daddy.  Those Mooney genes are strong ones!  But, I think Rosie and Patrick have a lot of similar features.  First off, they both have very big eyes--although Rosie's are blue and Patrick's are deep dark brown.  They also have a similarly rounded-shaped face.  Their little quirky smile, that seems to have a little hitch in the left side, is the same too.

However, they do have a lot of differences as well, which I guess I notice more than the similarities.  Rosie's eyes are blue and Patrick's are brown.  Patrick has very pronounced dimples, whereas Rosie's have yet to really come out (if she even has them at all).  Patrick's nose is wider, and Rosie's is skinnier yet chunkier.  BUT!  I think they both are absolutely adorable little Mooney minions. 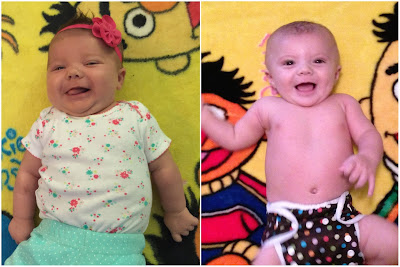 This one is easy for me and where I always go back to remind myself that even though Patrick and Rosie are very different in many regards, they are siblings and oh-so-similar.  Their dispositions are almost exactly the same (thus far!).  Both kiddos have been happy, chill, mellow babies.  Yes, there are slight differences: Rosie gets hangry when she's hungry and Patrick was never really like that, and Rosie prefers to be held and snuggled and Patrick didn't really care if he was or wasn't, but overall, these kiddos are very chill, cool-as-a-cucumber content little people.  I'm sure over time Rosie's personality will develop even more and she may be more? or less? like her older brother in that regard--only time will tell!  But, I can safely say as infants they both had very similarly happy dispositions.

In conclusion, my kiddos are similarly different.  But you know what?!  I wouldn't change it for the world, cause, having two kids that are exactly the same isn't that fun, is it?!  Gotta have a little change and throw us some curveballs every now and again to keep this life of ours spicy, isn't that right my little frijoles?!

Also, I know many of you (ahem, Lauren) have a profound love for side-by-side comparison pics, so I thought I'd throw a few more of Rosie and Patrick together for you.  Enjoy. 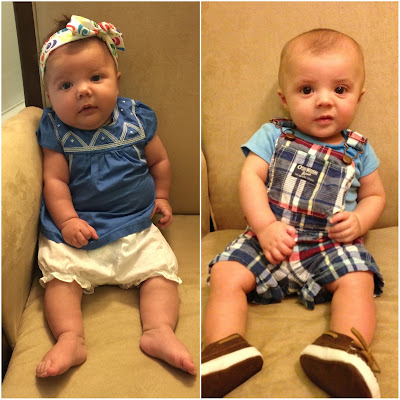 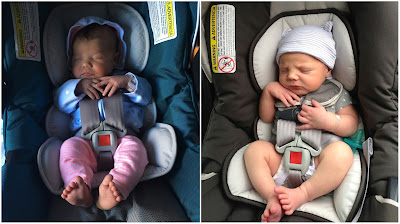 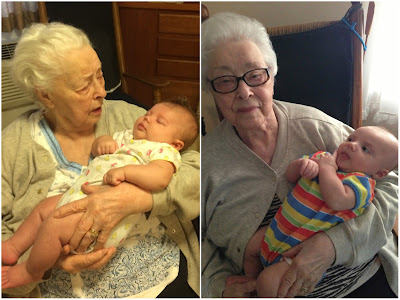 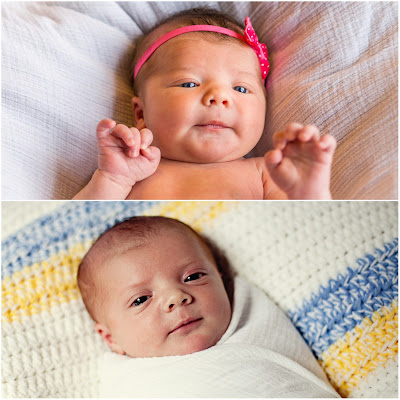 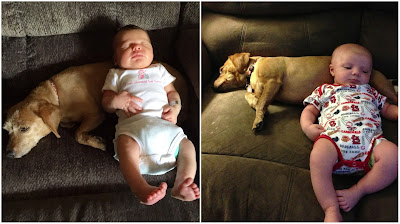