OHH EMM GEE.  Seriously.  I really really thought my post earlier this week was the end of the deadly plague--or as in my last post we were told it was Rotavirus.

Welllllll, so much has changed since then!  After the ER trip early Monday morning and seemingly siesta-ing all day, I went back to work Tuesday thinking this plague Patrick had was Rotavirus and would go away soon.  Welp, how wrong I was.

I called our doc Tuesday to give her an update about our ER trip and after giving the nurse a very detailed overview of what happened, how Patrick was feeling that day (still diarrhea-ing), and the ER doc's diagnosis, she said she'd relay the message to our doc and she'd call us back.  Well, about 1:30pm on Tuesday she called back and very bluntly said, "It is absolutely impossible for Patrick to have Rotavirus--he was vaccinated against it, and by the very slim chance it is Rotavirus, it wouldn't be bad at all and be gone before we knew what it was."  Ummmm, what?!!  The ER doc was so adamant that it was Rotavirus!  Our doc was peeved off too that this ER doc diagnosed him with something that he couldn't possibly have AND didn't confirm it (as you're suppose to do!) with a stool culture.  She also was upset that he was dehydrated and an IV and and bloodwork wasn't done.  Side note: I'm gonna fight that ER bill tooth and nail seeing as nothing was done that was suppose to be.  Anyways, so with Rotavirus thrown out the window, the doc told us that she was still super concerned with what this plague actually was, so sent us to Children's ASAP to get bloodwork done to get a CBC, check his white and red blood cell levels, and run an entire panel of food allergy (gluten, dairy, soy, lactose, etc...) tests.  I left school a bit early and hustled home to get Patrick (who was feeling especially crappy) and headed off to get bloodwork done. 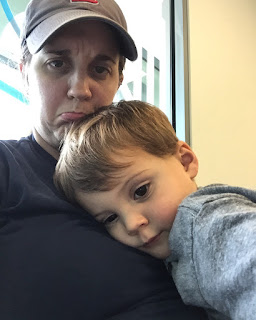 Talk about not feeling good--this kid sat on my lap and snuggled with me over and over until he was called back for his blood to be taken--something that he NEVER EVER does.  He also kept burping and it smelled just like puke so I was so scared he was gonna barf all over the nurse.  Thankfully he didn't. 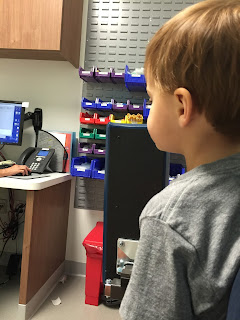 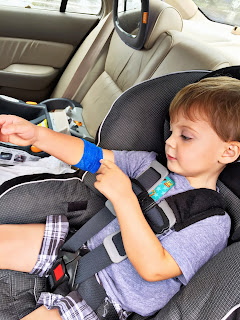 He got his blood drawn like a champ--seriously.  He cried right when she stuck the needle in, but then stopped and just watched her take 4 vials of blood.  He was super jazzed about the 4 Toy Story stickers he got when we were finished. 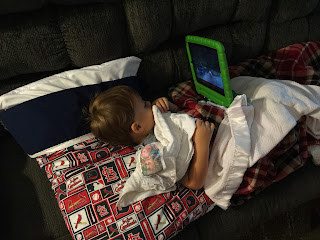 We then headed home and Patrick just wanted to be a vegetable on the couch the rest of the night.  Our doc said we should get some of our results back that night, and she was right--about 6pm she called and said that all of his blood work (minus the food allergy panel) came back normal.  Thank God.  No crazy out of control blood counts or anything alarming with that (cause you know my 15 year ER watching self went immediately to worse-case scenario dying of cancer...so glad that wasn't it).  Patrick then barfed all over the bathtub that night--I swear it was like a gallon of liquid that came up.  Poor guy. 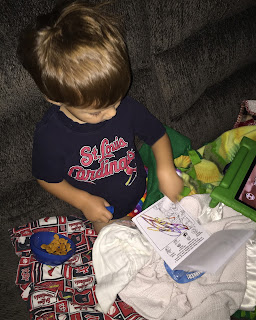 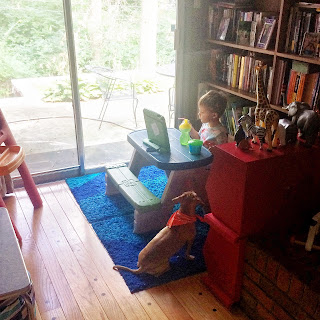 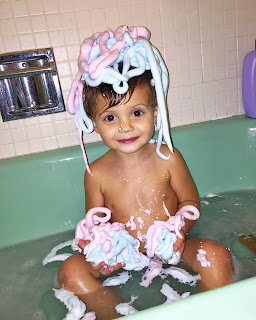 The next day, Wednesday, Patrick was acting better and hadn't thrown up since the night before, so that was encouraging.  He actually was asking to color and wanted to play with his foam soap in the bath tub.  He spent Wednesday evening chasing Scooter around and playing with his trains--something that I felt like he hadn't done in WEEKS.  Was he on the mend?!  I was cautiously optimistic. 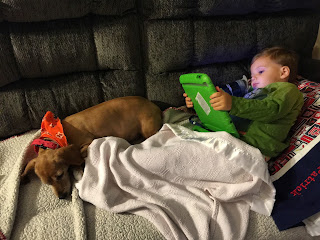 Well, Thursday comes and poof!  All that burst of energy was gone and he was back to having diarrhea and not being himself.  Mike had been off the past few days, but went back to work (3-11pm) on Thursday, so when I got home from school Thursday Patrick was still snoozing.  When het got up his belly felt hard as a rock, and just wanted to lay on the couch with his iPad.  Ruh-ro.  2.5 weeks in I felt like I knew what was coming, and I was right: vomitfest.  Luckily my mom had justtttttt gotten over in time to catch all of his puke in his barf bucket and prevent it from getting all over the place.  Gahhhh!  Was this ever going to stop?!  I called the nurse right then (the office was just closing) and she said she made us an appointment with our doc first thing Friday morning to come in and get things figured out.  That was day 18, and about 16 days longer than I anticipated this thing lasting for.  I.was.spent.

Luckily no more puking over night, but Patrick did wake up at 4am (WHATTTT??!!) screaming and did not want to go back to sleep.  So we caved and gave him his iPad so we could at least go back to sleep for a few hours before we all had to be up and take him to the doc.  I honestly think he hates his bed now cause he's woken up covered in puke or diarrhea so many times it's just scary for him. 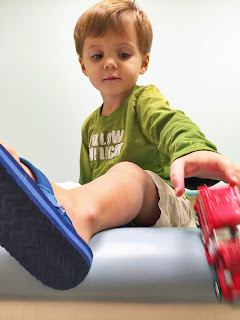 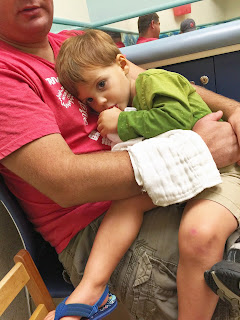 Anyways, we got to the doc and she was just as frustrated as we were about all of this.  She looked Patrick over a bit (and he'd lost almost 4 pounds! OMG.) and decided to give the GI specialists at Children's Hospital a call to see what their course of action would be.

GI prescribed a probiotic and Pepcid prescription to hopefully help calm his inflamed stomach and bowels. We're to continue a bland lactose free diet through the weekend. If he's still vomiting/diarrhea come Monday we're going to GI at Children's to scan him. Both our doc and GI seemed to think this was a virus that the infection is gone but the after effects are lingering and not going away because everything he eats keeps irritating his bowels and coming back out. She said in extreme cases of this--which were not there (yet???)--kids can't get their bowels to stop being inflamed so they have to basically do a stomach detox where they are hospitalized and only get food through IVs so their tummy can heal. She said if he is inconsolable and holding his tummy and/or having bloody poop to go to the ER ASAP as that is a major inflamed bowel issue. So, more waiting through the weekend for us. 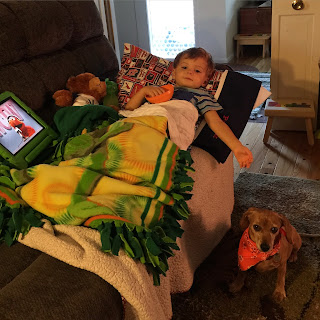 Obviously this wasn't the immediate course of action I wanted to hear--cause we've been waiting for 19 flippin' days.  But, I am willing to give the Pepcid a chance to work if it'll spare us a trip to a specialist and/or a hospital stay.  This afternoon once we got home and gave Patrick a dose of the Pepcid (we had to hold him down and literally shoot it down his throat--I think he's sick of taking meds!) he took at 4 hour nap (!!!) and was more active than he had been.  However, it was a rollercoster-type active: running around chasing Scooter and asking for Lucky Charms, then back on the couch screaming and crying for no reason. ALL.DAY.LONG. he'd be fine one minute, then the next it's like he overdid it and is tired and sick and just wants to watch his iPad.  So yee-freaking-haw about that.  BUT, since we got back from the doc this morning he's had no diarrhea nor puking.  So that's good at least.

I was suppose to go to my friend's winery bachelorette party tomorrow, but I had to back out because I just need to stay home with Patrick, even if he is seemingly better.  I just want to be with him--better or not--because of the whirlwind of a past 19+ days and feel like I owe that to him since I wasn't with him all of those days because I was working (#momguilt).

Anyways, FINGERS AND TOES DOUBLE CROSSED this plague is on the way out and the Pepcid and probiotics start working and deflame his poor little belly and all of this starts to dwindle out.  I really am so pooped, especially dealing with a lot of this solo since Mike's been at work, and I really just want our happy crazy wild little boy back. Thank you for all the well wishes and thoughts and prayers...I'm really hoping this is the end of it and Patrick is on the upswing SOON!!!
Email Post
Labels: doctor's office Patrick plague sick