How on earth has it been ONE MONTH since we met our little Clark?!  It feels like yesterday and a million years ago all at the same time.  Grief is funny that way...it's forever and instant it seems. 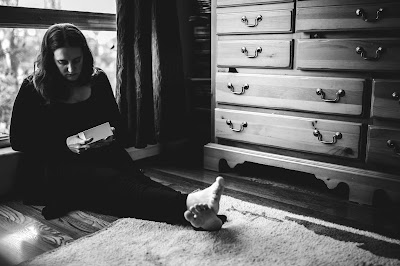 I took another self-portrait...one month after my last one... 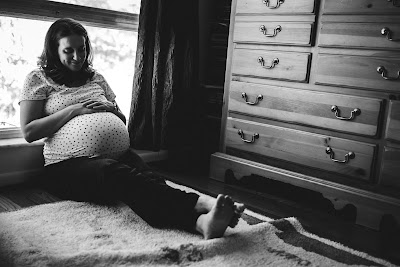 Oh how I wish I was holding a little cooing baby in my newest one.  But instead I'm holding him in where he rests for now...a little box.  And maybe this is morbid?!  I don't care.  It's us.  It's real and raw and true.  We had Clark cremated and his ashes are in a little box the funeral home gave us until we can decide what we'd like to do with them.  I can't bring myself to look at urns without losing it and I think we've both been avoiding the 'what now?' convo to figure out what and where we want to go from here with our little Clark.  Truly I kinda like having him with us...so perhaps we will get a little urn for him and keep him here with us.  I don't know...all part of the unknown waters to come that we are trying to navigate.

As I look back over the past month there have been some highs and some lows.  If I'm being honest, probably more lows than highs.  Although one pretty awesome one happened this week... 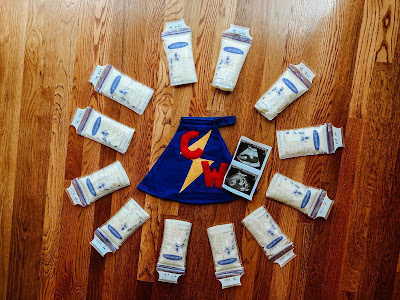 I sent off 400 ounces of breastmilk to be donated.  I have another several hundred ounces in the freezer waiting to head out too, so that makes me smile so so so big that Clark's milk is going to other little ones who love their mama's milk.  I know he's smiling down from Heaven on these little ones who are sharing his mama's milk.

It's definitely been a hell of a month.  I've spent a good part of it very angry.  And probably not why you'd think -- I mean yes, I miss Clark and hate hate hate that we had to say hello and see you later all at once 4 months early...but I've been quite angry at other things.  And these things, which I'll elaborate on in a post later --because it's really a story all in its own -- have really taken away from what I should be focusing my energies on, what I should be grieving about.  My stupid insurance situation is a part if it...but a big root of my anger is deep-seeded in  how much Clark's arrival has almost pushed people away, seemingly feeling like I've been shunned.  It's a horrible feeling, especially when these people were suppose to be a support group, a community.  But I haven't felt that at all (quite the opposite) and it has been a massive cause of a LOT of anger this past month.  And truly, I HATE IT.  I hate how it's made me feel, hate that it's taken so much away from my grieving, hate everything about it.  And I hate that some have told me to 'ignore it, focus on the good' and that sets me off too.  Like oh okay, it's that easy?!  Sure thing.  Jeez.  So if you're reading this, take my advice: don't ever tell anyone to 'ignore' something that is bothering them.  Because it's the worst advice ever and don't you think we'd be doing that if we could?!?!  Anger is a part of life and I've found, especially this past month, if you try and squash it or ignore it it makes it a thousand times worse.  So it's okay to be angry...and hopefully some growth will come from it...I KNOW it will for me.  I'm already seeing it...angry and all.

A friend, who just lost her son at 23 weeks a few weeks before we lost Clark, posted this article recently.  The last paragraph, "The worst thing you can do is nothing. The silence without a baby at home is deafening, help to fill that empty airspace. Call, text, send cards, bring a meal, and keep showing up. Even if they can’t articulate it, your friend will always remember your support."  And how right that is -- like I cannot emphasize it ENOUGH.  And how much I want to send this exact article out to a few people to be like 'HEYYYYYYY, check this out.'  Because a simple text message or email goes a long freaking way.  But maybe I'll post it on social media soon and perhaps they'll see it there...

What's crazy is I already have my 6 week (at 5 weeks) postpartum appointment next week.  Insane.  I cannot believe it's gone that fast.  I should be going that week for my 27 week appointment and gestational diabetes test but instead I'm going to make sure everything is healed up good after my fourth c-section.  I still can't wrap my head around that.  And amidst of all of the anger and sadness and grieving and glimpses of happiness, we still don't have any answers as to why our little Clark was so riddled with hydrops and edema and cystic hygromas.  Not.one.answer.  And that is so tough, so painful...because even though it wouldn't have changed any outcomes, I STILL WANT TO KNOW.  I hope and pray every night that the autopsy and pathology results yield SOMETHING for us.  Because we want to know...we NEED to know.  A lot of what we want to do in the future (more kids? no more kids?) kind of depends on what answers we get.  I had someone last weekend ask if we were going to try again for another baby.  I was kind of taken aback by the question -- I mean, I don't know.  And I've been saying that here for weeks -- truly.  I don't know what we're going to do.  We have a lot of unanswered questions that we are hoping yield some answers soon...but even if they don't, Mike and I have a lot to chat about, when the time is right, with just us.  So truly: I don't know if we are or not.  But I will say, I am so so so grateful to my docs for a healthy 4th c-section for myself and the green light to have another kiddo IF we want it.  Because I think nothing would have been more crushing in this situation is if we were told medically we cannot have any more.  So silver lining there.

I am having a hard time lately really putting into words what I'm feeling.  I mean, I go from grateful -- I am so grateful Clark chose us to be his parents...truly.  Even though he's not here he's doing big things from above...I can feel like.  To feeling extreme sadness and grief in missing what could have been.  Missing having him growing inside of me, missing feeling those little kicks and punches, misses preparing for his arrival and all of the newborn goodness pictures I was going to snap, missing his big siblings getting SO EXCITED for his arrival and what they're going to do with him, missing SO MUCH.  And when I really stop and think about all of this, I go into an emotional tailspin and can't stop crying.  So lately I have been putting it out of my mind and focusing on something else so I don't have to feel sad...but then I'll see a pregnancy announcement on Facebook or new baby clothes ad and it sets me off.  It's just the absolutely fucking worst feeling.  I wouldn't wish this on anyone EVER.  And I know as the days go on and life gets busier and busier things will distract me more, and time will help, but I don't think it'll ever go away.  That fire of missing him and all that goes with it will never ever be extinguished.  So for now, I'll continue to reflect, to write, to share his story and my grief and fuel that fire of missing him because if it's never going away I'm not just going to ignore it (because ignoring things rarely works out, right?!).

As I keep going through these loss waters I've really seen how much this subject is NOT talked about; how it's shyed away from (and I've said that here a'many times!)...so I'm going to keep talking about him and shouting about him loud and proud.  He is our son, however short of time we had him here with us, and his story, his life, his legacy NEEDS to be told...just like everyone else's does.  So here's to you, Clark man.  One month since your birth day, and one month of missing you like crazy.  Keep watching over us and doing big things up there little guy.  We love you so so so much.
Email Post
Labels: clark grief grieving missing him missing it one month our little C sadness