One word: unbelievable.  Seriously, this season--especially the last month of the regular season--was simply unbelievable.  I posted a picture back in the middle of August of Scooter's new collar tag being a Cardinals one and commented that we are devoted Cardinals fans--through the hard times and the good (this was at the point where they were 10.5 games out of the playoffs and seemingly "off" everyone's radar for doing anything post September.  Boy, did those Redbirds show us! 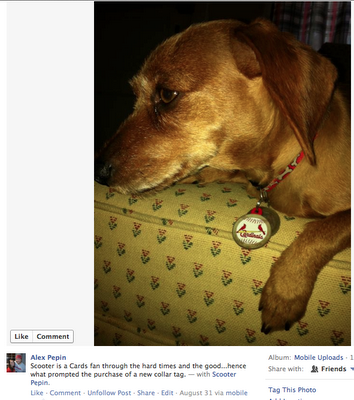 I cannot even express how excited I was that we simply got into the playoffs.  Then once we upset the Phillies (which I gladly welcomed because they have some seriously nasty and mean fans...and that's one thing that always irks me the wrong way: poor sportsmanship), I was stoked and hopeful: I mean, the Brewers were in our division.  We'd seen them a ton over the season and were really successful against them the last series we played.  After beating up on the Brewers, I was happy and content.  NO ONE expected us to win the NL Pennant, let alone get into the playoffs, so I was happy.  I'll take an NL Championship, and I'll be very happy with it.  Then we got the Rangers, and as much as I expected a blowout from this hot-hitting team, there wasn't one (besides game 3 when we blew them out!), and I was optimistic and getting really excited that we could actually WIN the world series this year.  But as game 6 approached and we were down 3 games to 2, I was reverting back to the "I'm content with an NL Championship." 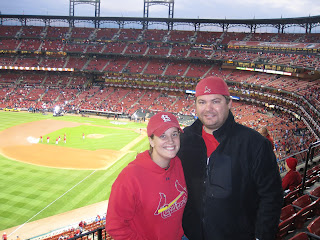 On Wednesday this past week the weather was super crappy here in STL.  I got a text alert about 2:30pm that the game was postponed to Thursday because of the weather.  I was ecstatic!  We had conferences till 7:30pm that night at school and I was already peeved off I was going to miss the first part of the game for being at school still.  When it was postponed to the next night I quickly hopped on StubHub.com, called Mike and told him I found tickets for a little less than we were willing to pay, and we both decided that even though we probably shouldn't spend this massive amount of money on ball tickets, we decided we needed to because we never know if we'll ever be able to go to another Cardinals World Series game again.  So we got tickets to game 6 for Thursday night and we both were over the moon--it's the world series!  This is something we can tell our kids about one day. 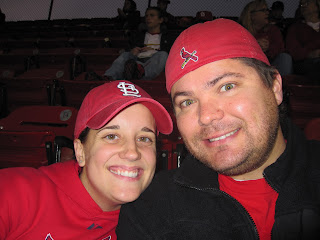 So Thursday night came and we headed downtown extra early to soak up all the action.  Heck, this could very well be the last game of the season and we wanted to make sure we experienced every part of it.  We snapped a bunch of pictures and took our seats down the 3rd base line.

The game didn't go very well through the first half; tons of errors (2 dropped fly balls!!!), and only 3 hits through 7 innings for the Cardinals--as many errors as they had.  Going into the 8th inning we were down 7-4 and I was beginning to accept that we were going to see a new world series champion, and it wasn't going to by our Redbirds.  Then, just as I was thinking that, Allen (or as we call him "Helen", cause that's what the announcer sounds like he's saying when he says his name) Craig hit a homer to left field and the stadium erupted.  The guy sitting in front of us spins around and is shouting, "We're not going quietly!  You gotta believe!!!" And a little glimmer of hope sprung up and I thought, gosh, this would be an awesome comeback that NO ONE is expecting it.

Then the ninth inning rolls around.  We have 2 on base, still down by 2 runs, and David Freese is down to his last strike--inevitably ONE strike away from the Rangers winning the World Series.  Then magic happened: Freese stroked a rope down right field and DOWN IT DROPPED!  The stadium went nuts!  We're tied!  7 to 7!  AHHHHHHHH!  However, not EVERYONE expected this to happen...as you can see by the pic below, a trigger-happy news station prematurely announced that the Rangers had already won.  Boy, were they so far from wrong. 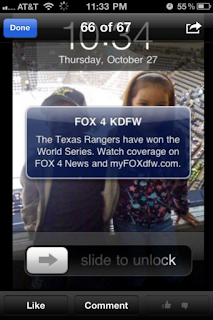 The Cardinals are not going down without a fight!  Everyone around us is giving us high-fives and screaming.  Mike and I were jumping up and down like crazy and waving our rally towels like we were trying to levitate ourselves off the group.  This was so awesome!  We have a chance!  We're back in this!

Well, that thought was short lived; in the top of the 10th the Rangers Josh Hamilton hit a 2-run homer to give the Rangers another 2 run lead.  DANG IT!  That magic was short lived and the stadium went eerily quiet--very similar to what the Astro fans experienced in game 5 of the NLCS in 2005 when Albert hit the massive homer off of Brad Lidge.  Poop.  I was so disappointed, and again reverted back to the "I'm happy with an NL Championship."  Then the bottom of the 10th rolls around and STILL the Cardinals are not rolling over.  We manage to push one run across, and then, with 2 outs and down to just ONE strike away from winning a World Series title for the Rangers, Lance Berkman (Big Puma!) hit a line drive single to center field which scores Jon Jay.  Again, the stadium is roaring--we tied it up again!  What are the chances?!  Two times in TWO innings that the Rangers are within one strike of a WS title and the Cardinals come back.  The stadium was going nuts--my voice was beginning to hurt from screaming so loud.  This was insane!

The top of the 11th was uneventful--that was a surprise to everyone--the Rangers bats were quiet and they didn't score a run.  The magic was boiling back up.  It seemed like everyone in the stadium KNEW something magical was about to happen.  Then, just as goosebumps were popping up on my skin, David Freese stepped up to the plate.  This was the hero of the 9th inning, and I had a good feeling.  With my hands over my face Freese hit a towering home run to the deepest part of the park in center field and the stadium erupted with screams, shouts, and high-fives.  "We'll see you tomorrow night!"  Was plastered all over the billboard--THERE'S GOING TO BE A GAME 7!!!!  Ahhhhhh!!  Mike and I were going crazy!  We were high-fiving everyone, giving hugs to each other, screaming and just going insane.  This was something I've never experienced and can never imagine topping: it was the BEST game I've ever been to and I don't think anything will ever top it.  The whole way home Mike and I couldn't stop talking about it; WE EXPERIENCED BASEBALL HISTORY!  This was something that we were so happy and so proud to be a part of. 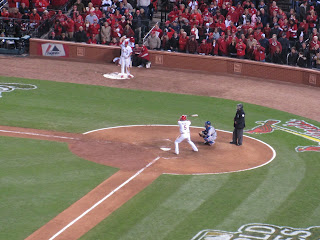 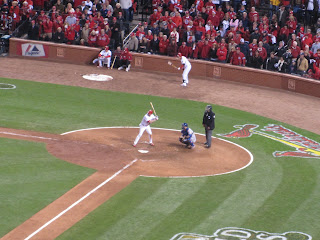 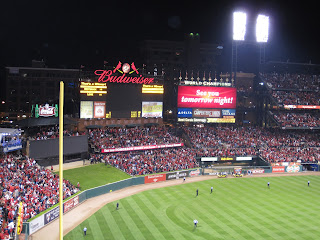 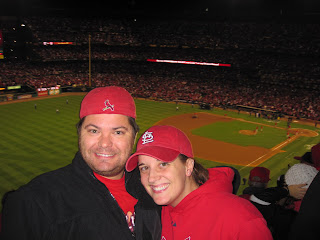 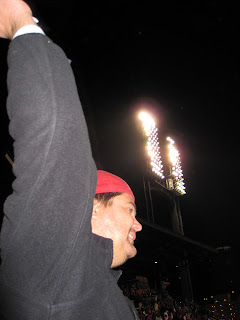 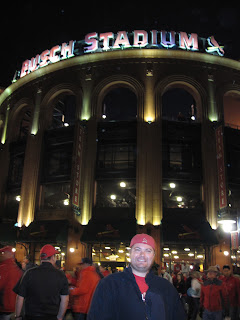 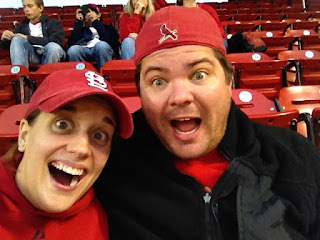 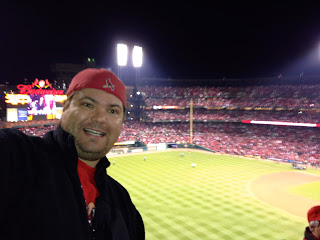 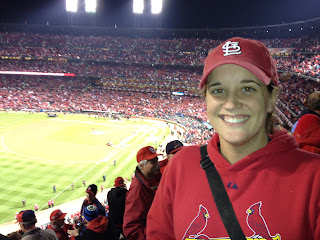 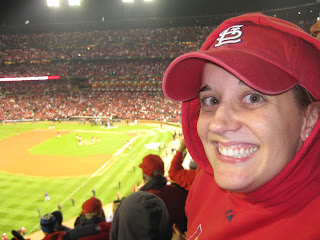 After game 6 we KNEW we were going to win the world series.  I mean, how do you NOT come back out the next day after a game like that and dominate again?!  That was my thinking and I knew the Cardinals were going to be feeling the same way.  Although we didn't have tickets to game 7, we felt like we were "there" and a part of it after experiencing the magic of game 6.  We spent the evening watching the game with friends and again soaking in all of the magic the Cardinals were bringing to this indeed magical season.  Sometime after 10pm, with the Cardinals up 6 to 2 Jason Motte got David Murphy to fly out to Allen Craig for the 3rd out of the 9th inning and the CLINCH of the 2011 World Series Championship. 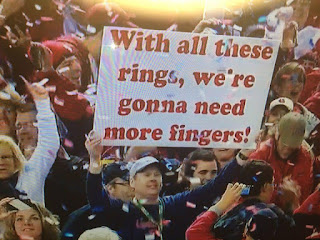 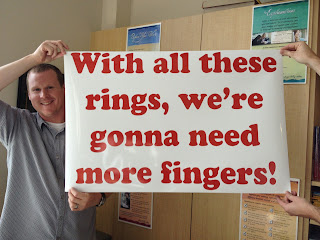 (side note: My buddy Scott, who's the science teacher on my team at MRH, made this AWESOMELY AMAZING sign on Friday during school before he went to game 7.  His sign was then ALL OVER TV, the Internet, Facebook, Twitter, and new sites.  Absolutely incredible, and what a great memory for him.  Scott, you're awesome!)

OH MY GOSH!  We won!  The Cardinals, who were basically "down and out" with barely a month left of the season, are now World Series Champs (and THIS DUDE is super rich).  Unbelievable.  Incredible.  This season has been one for the record books for so many reasons.  I cannot wait for the 2011 Cardinals DVD to come out so I can relieve it all again.  I feel so proud to have been a part of it, and even prouder to be a St. Louisian.  I don't think words can express enough how excited, happy, joyful, (insert adjective here), I am.  And then I raced out to buy a 2011 Champions shirt. 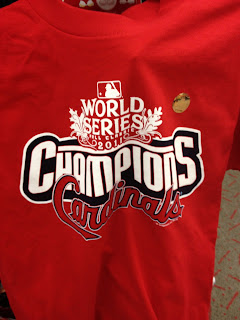 So here's to you, Cardinals!  Thanks for showing us that you should never ever give up, and that hard work, teamwork, and the will and drive to win can take you to magical places.  11th World Series title in 2011.  Just incredible.  Here's to another fabulous season in 2012 (and maybe the 12th title?!!), and another record-setting season for the Cardinals! 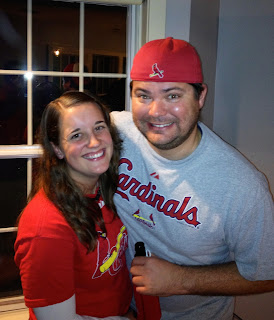