Yeah, yeah, I know, I suck.  I haven't blogged in a while.  I'm sorry!!  I've been super duper busy.  Whoever (me!) thought taking 9 grad school hours AND working full time was a good idea is now feeling a tad bit overwhelmed.  But it's a good overwhelmed...I would definitely rather be busy than having nothing to do at all, but WOWZA!  I sure do get tired out a lot.

Anyways, currently I'm super stoked about the Cardinals...seriously, if you have not been following them, you should.  The past 6 weeks have been nothing short of a miracle for this team; 10.5 games out of a playoff spot in late August and they COME BACK and clinch the Wild Card on the final game of the season!  Then they surprise EVERYONE and beat the Phillies on their home turf in 5 games (with a pitching performance that was absolutely lights out by Chris Carpenter...I have NEVER seen a game like that before!  It was incredible!!).  And now we're tied 1-1 with the Brewers for the NLCS and a chance to advance to the World Series.  Gosh, this city is electric with Cardinal fever! 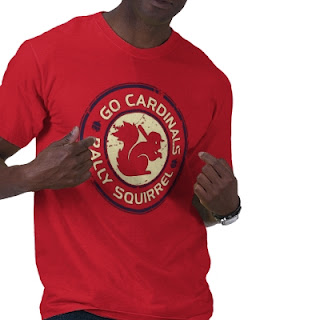 Everyone is literally going "nuts" for the Cardinals "Rally Squirrel" too (I really want this t-shirt, by the way)...if you haven't seen why the "squirrel" is now the Cardinals unofficial-official rally animal, check out this YouTube clip:

Ever since the squirrel showed up the Cardinals have been playing amazing...and the sales of "Rally Squirrel" attire have taken over STL.  I've seen t-shirts, headbands, towels, cozies, and so much more!  This city is so alive with Cardinals fever it's incredible.  I just LOVE this time of the year!

Anyways, wanted to do a tribute post to my beloved Cardinals...here's to beating the Brew Crew and advancing on to the World Series in 2011!  Woop woop!!!