First off, let me point out, Patrick is 13 months old today...and as much as I wanted to, I did not do a monthly blog post/update for him.  As much as I love sharing his milestones and growth with the blog world, I am stopping with him (and future kids) at 12 months...and will just do little milestone posts (like this one!) every now and then.  I think if I continue to do monthly posts for Patrick, I'm setting myself up to do that for future kids, and when the other kids come and I'm having to blog theirs AND Patrick's and oyyyy, it just gets too much.  So this is me declaring that you can look forward to monthly blog posts from 0-12 months only.  You're welcome. 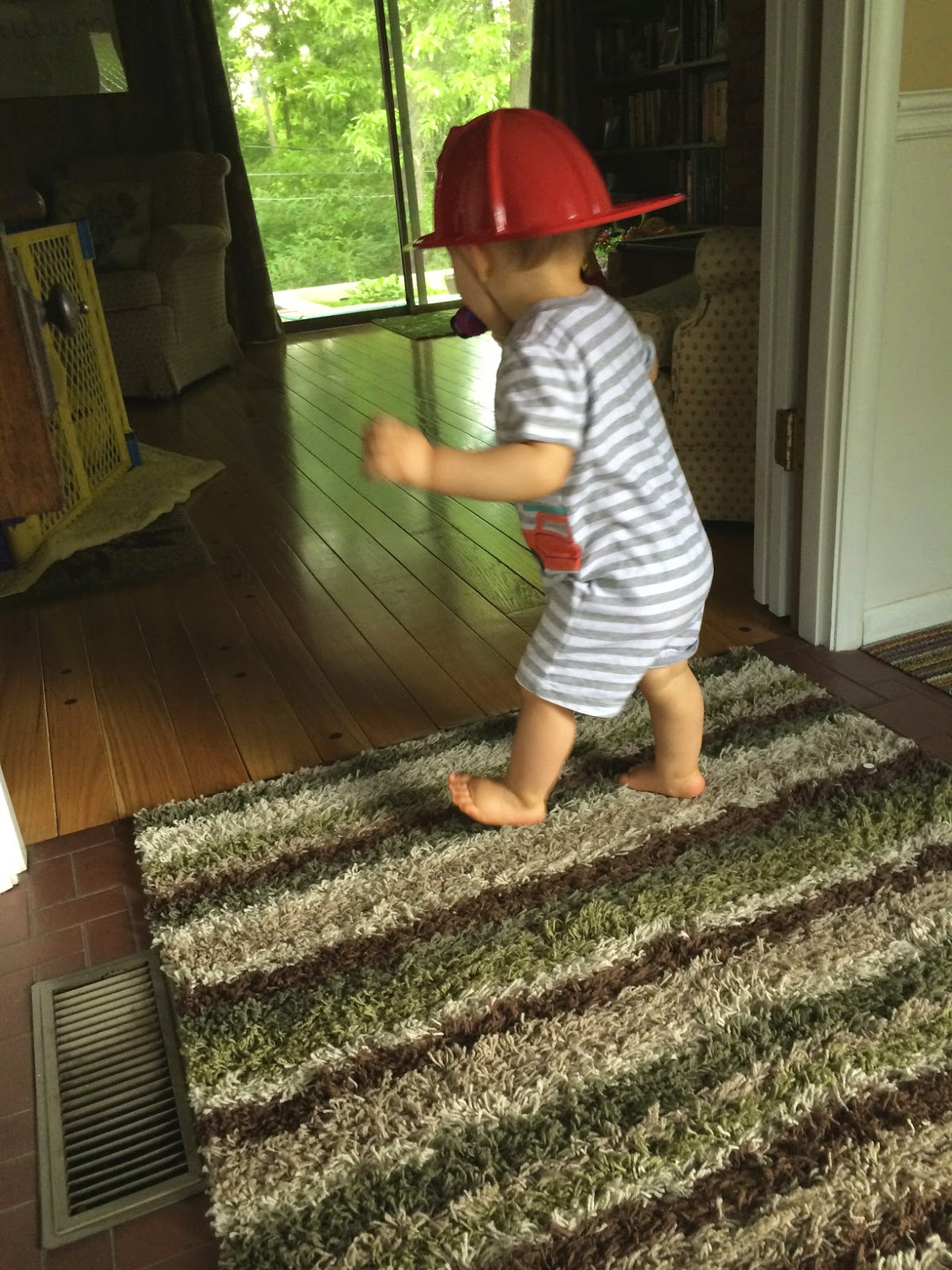 Okay, whew, so that's outta my system, back to the main reason for this post: Patrick is officially walking!  I think I speculated in his one year old post that he'd be walking soon--and I was right, he's officially walking now that he's 1 year and 1 month old! 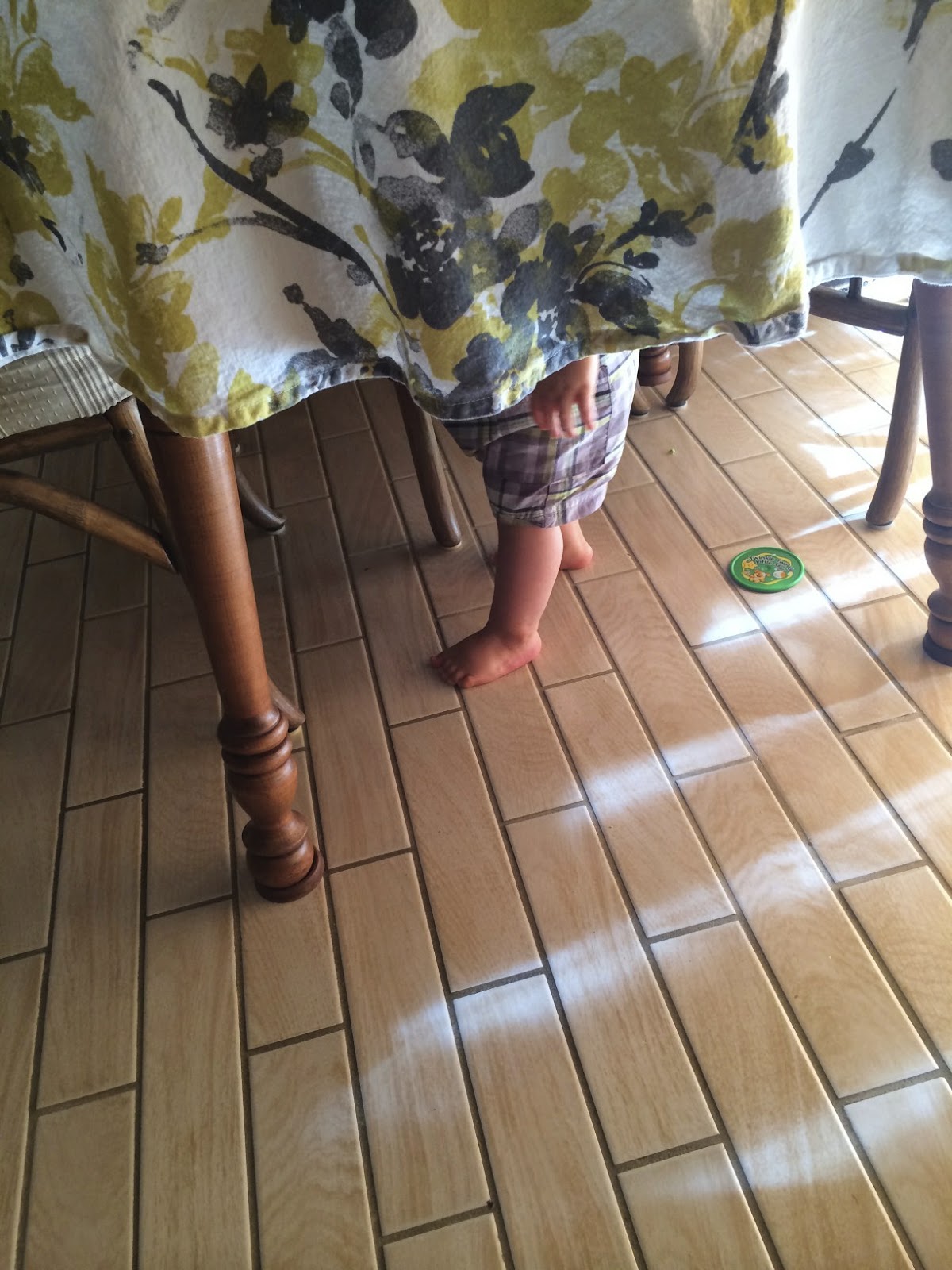 yup. walking under the table. dude has skills.

Now, he is by no means walking like you and me; as my friend Tiff described it best, little boys look like drunk sailors when they first learn to walk.  Um, SPOT ON.  That's exactly how he looks!  All wobbly and unsteady and moving with Frankenstein legs that he doesn't bend at the knees.  It's the cutest thing ever.  He also likes to push Scooter in his shopping cart or on his zebra scooter--this is hilarious too because he's never shown any interest in pushing things before he learned to walk!  Now he does it all the time! 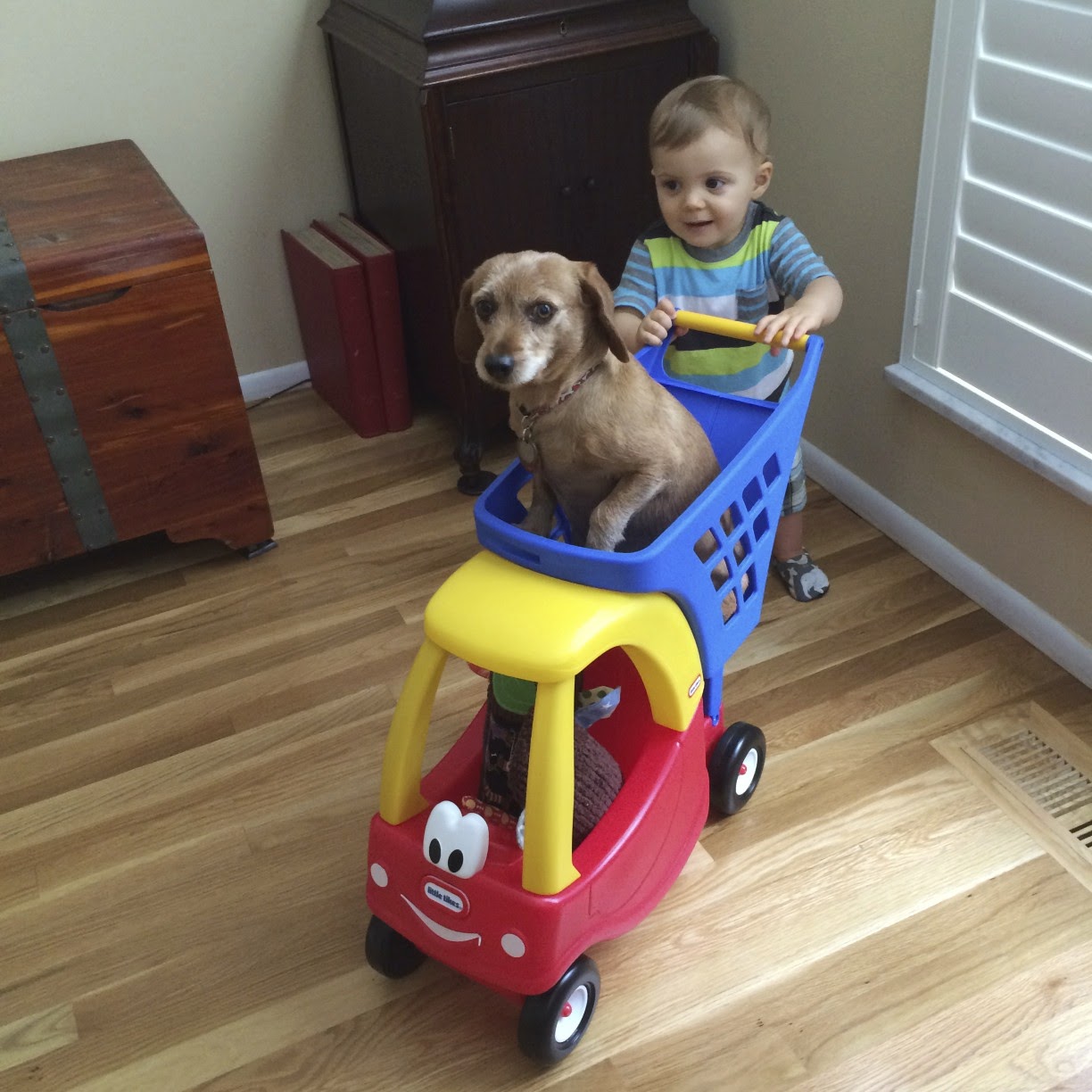 He defaults to walking now, but, as I just pointed out, is unsteady and wobbly, so falls A LOT.  When he does this, he'll revert back to crawling for a bit, then pull himself up, and walk again.  It's quite cute.  But he's becoming more and more steady on his feet each and every day, and strings more and more steps together before he falls down.  He's definitely getting the hang of it! 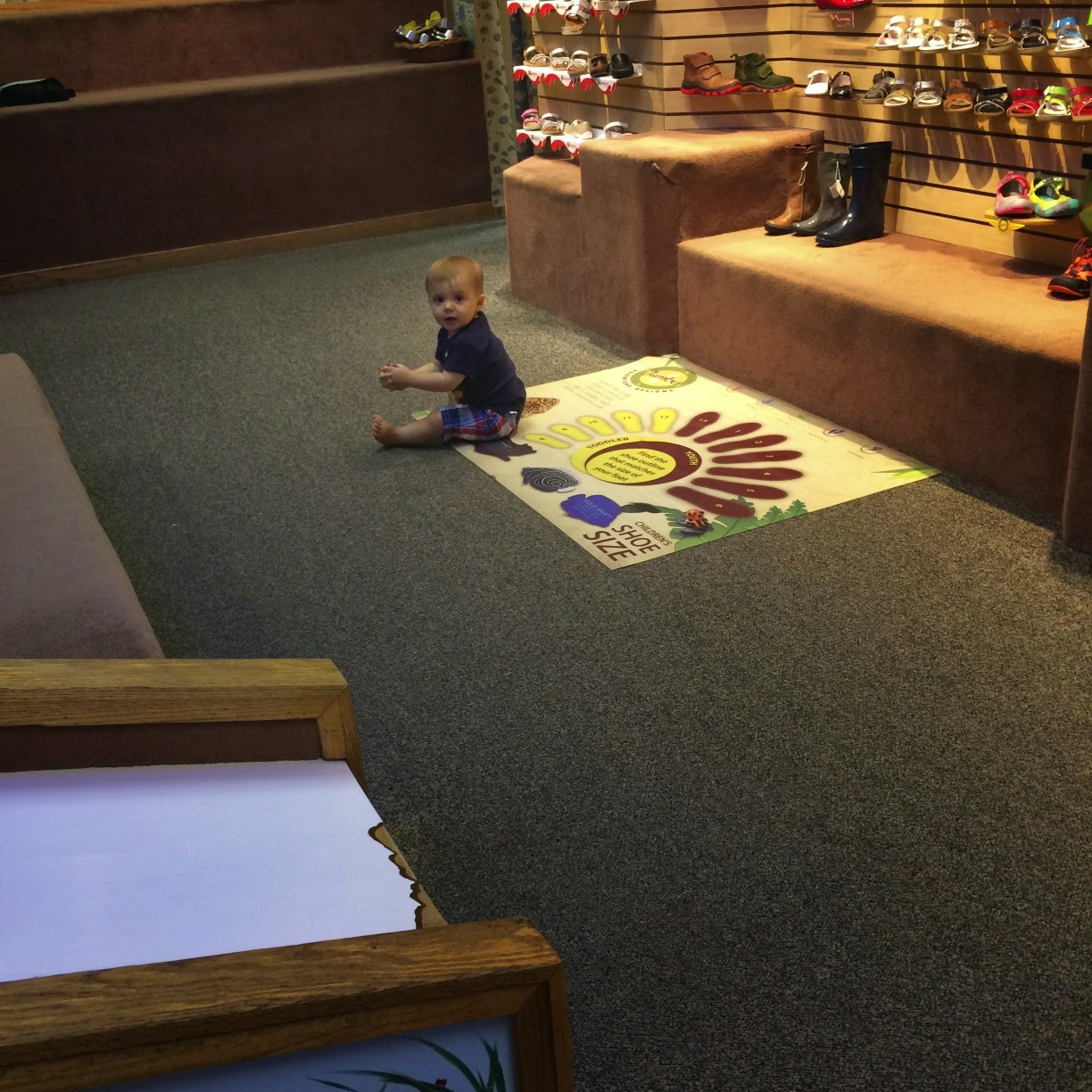 Since Patrick is officially walking, Gammie (my mom) said she wanted to take him to get his first pair of REAL walking shoes.  So, earlier today we headed to Laurie's Shoes (the BEST shoe store for little kids! --if you're in STL, check them out!!) to get Patrick sized and shoes picked out.  Although my mom wanted him to get traditional white high-tops (which I pointed out he'd get made fun of if he wore those! haha), after talking with the sales lady we decided on a cute (and very flexible) pair of blue and yellow Saucony shoes.  Dude is wearing a size 6!  WHAT?!!!  So his size 4 Toms that I've been wedging on his feet officially don't fit anymore...and his Keens (size 5) still fit (they run a bit big) but probably won't make it past this summer.  Also, I want to mention, since I'm on the growth topic, that Patrick is now 27 pounds! UMMM, WHATTT?!!  He gained 2.5 pounds in a month!!  This is crazy--and must be a growth spurt.  I thought he'd lean out (or at least not gain any weight!) when he started walking, but no, I was wrong.  Hopefully he'll stay around this weight for a while...I really don't want to buy any more (bigger) summer clothes!  He's got tons! 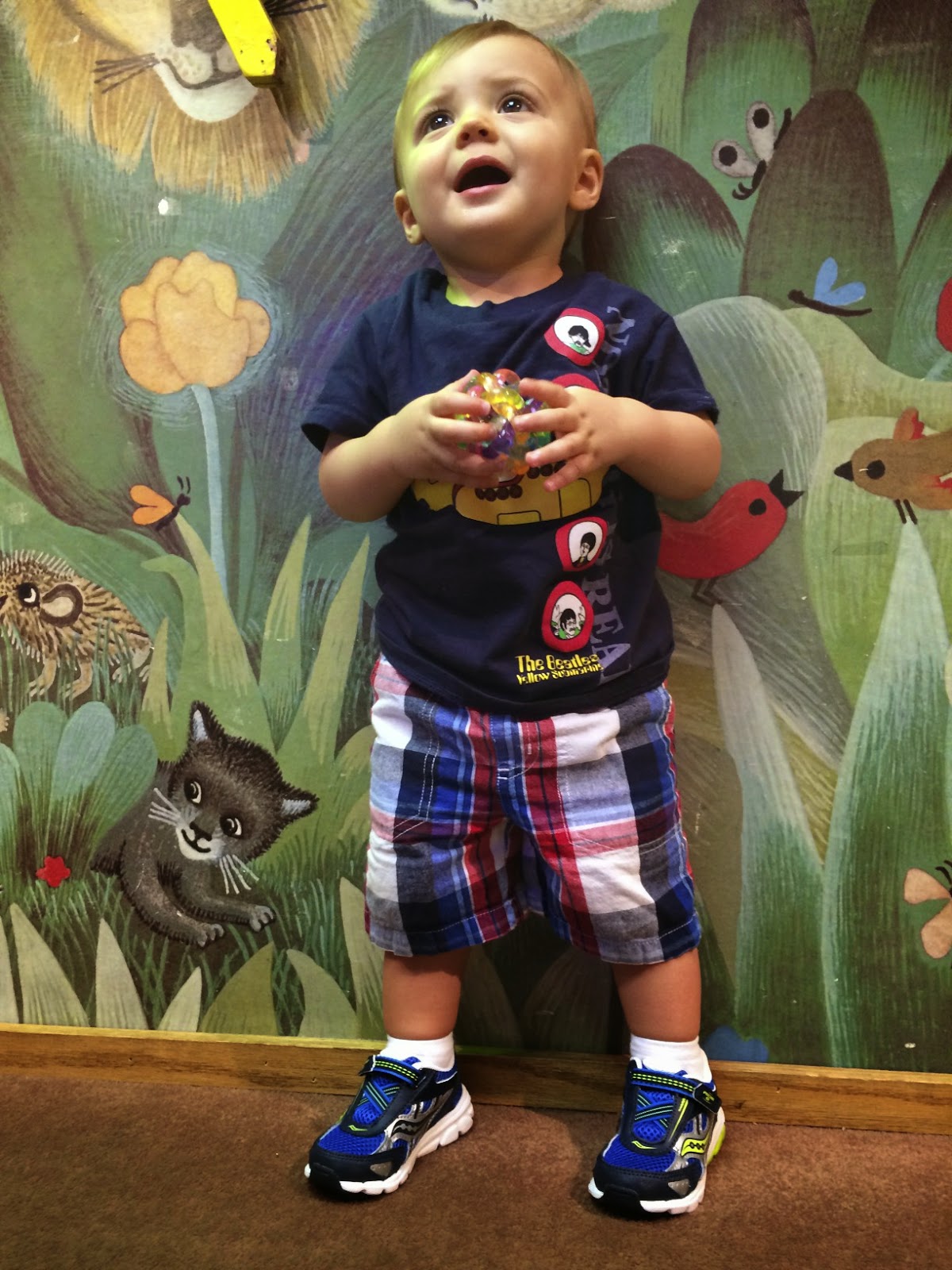 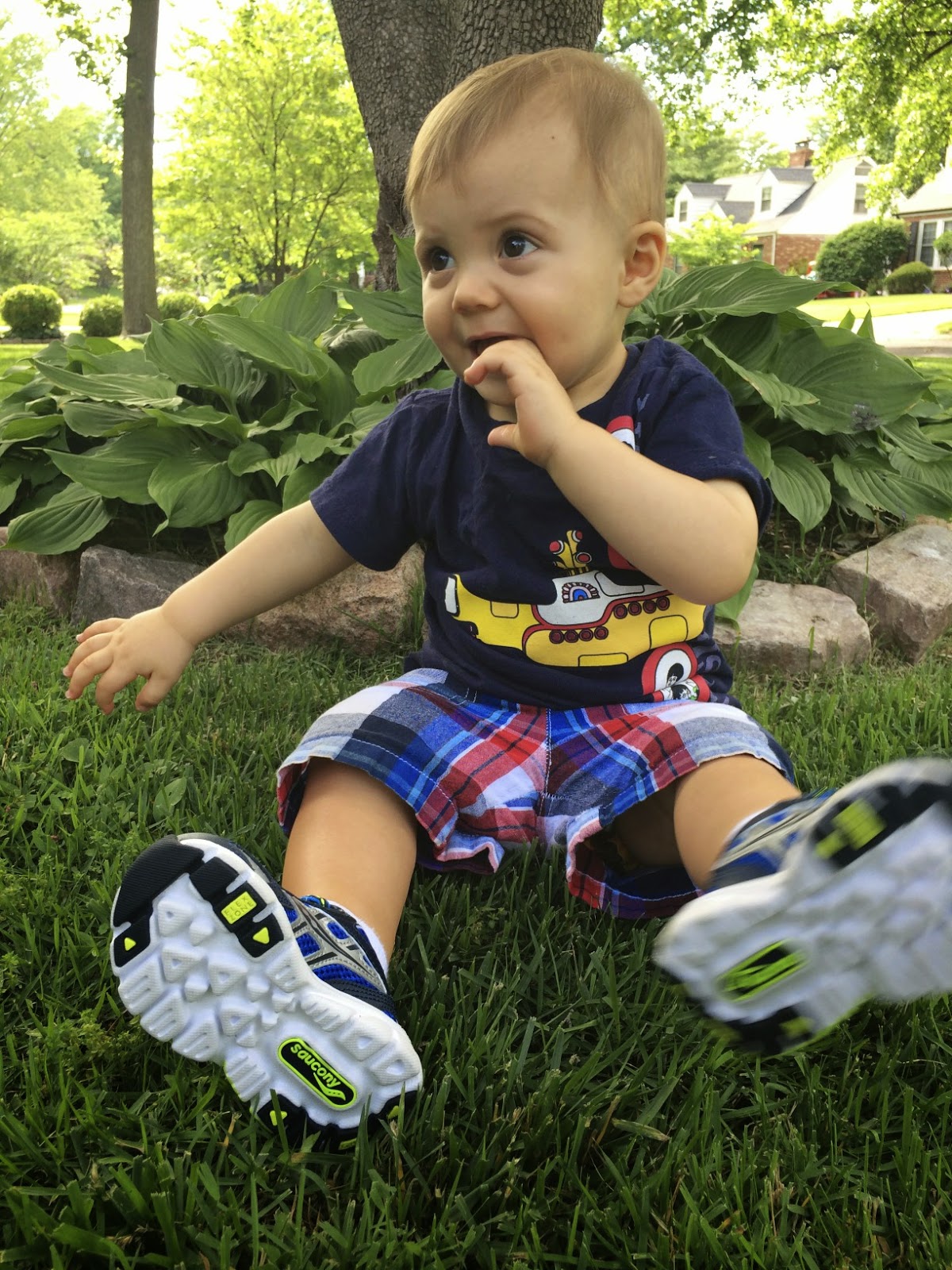 Anyways, so Patrick got some new kicks today (and new socks too!) and cruised around in them all afternoon.  He looks so darn cute in them and walking around everywhere in them.  I think he's still trying to figure out the walking thing in these big 'things' on his feet now too--since he's only ever walked barefoot or in the leather-soled walking slipper shoe things.

So, yes, HUGE milestone for Patrick: he's a walking fool now!  I'm sure by the end of the summer he'll be running circles around me like crazy!  I can't wait!  I'm sure there'll be a'many games of tag and hide-and-go-seek in our future.

Until then, I leave you with this Patrick walking montage video.  He loves to walk unassisted, but also loves to push things (and Scooter) when he walks too.  Enjoy.