Well, it's official: 13.5 months, or exactly 414 days into Patrick's life, he came down with his first fever.  And, although I absolutely hate seeing him sick, I am so thankful and grateful that his first fever hit so late into his life.  But, since this is his first official "being sick", I figured I'd document (aka blog) it.

Yesterday was a crazy day: I actually had a tech meeting with some fellow teachers at 11am, and really needed to hit up Target before I met them and dropped Patrick off at my mom's.  Well, 9:30am rolled around and there was no sign of Patrick waking up.  Usually I'd let him snooze as long as he wanted, but I had places to go and I really needed him to get up.  So, I woke him up--which was my first mistake.  Never wake a sleeping kid.  I know this, but my Target-urge overtook me!  Patrick is NOT a happy camper when he is woken up, so when he woke up all angry and upset, I figured it was just that.  I even said out loud to myself when I got him out of his bed, "Dude, you're kinda hot" but just thought he was warm from sleeping--since he seems to be a heavy sleeper like his pops.

Well, we went to Target, and Patrick, who usually is great--albeit a chatterbox--during any shopping excursion, was exceptionally good and quiet.  He also kept yawning, and I just thought he was tired cause I woke him up early (WRONG).

I dropped him off at my mom's and I went to my meeting.  My mom sent me a video of him climbing the stairs (first time!--which, oops, I never shared!  Haha--better go Instagram that!!) and then, shortly later, she text me and said he was feeling really hot and didn't eat much lunch.  Well, my meeting was wrapping up, so I called her and told her I was heading home to meet her before his nap.

As soon as I got home, I could tell Patrick was not himself--very clingy, kinda whiny, and definitely hot.  The temp said he had a 100.8 fever.  His first one!  But greattttt.  This kid is never sick!  And we were suppose to pack up and head to my aunt's lake house when he woke up from his nap and Mike got home.  Welp, those plans got trumped by little dude's sickliness.  I called my aunt and told her we'd take a raincheck on coming down, gave Patrick some ibuprofen and laid him down for a nap, hoping his fever would magically disappear with a nap. 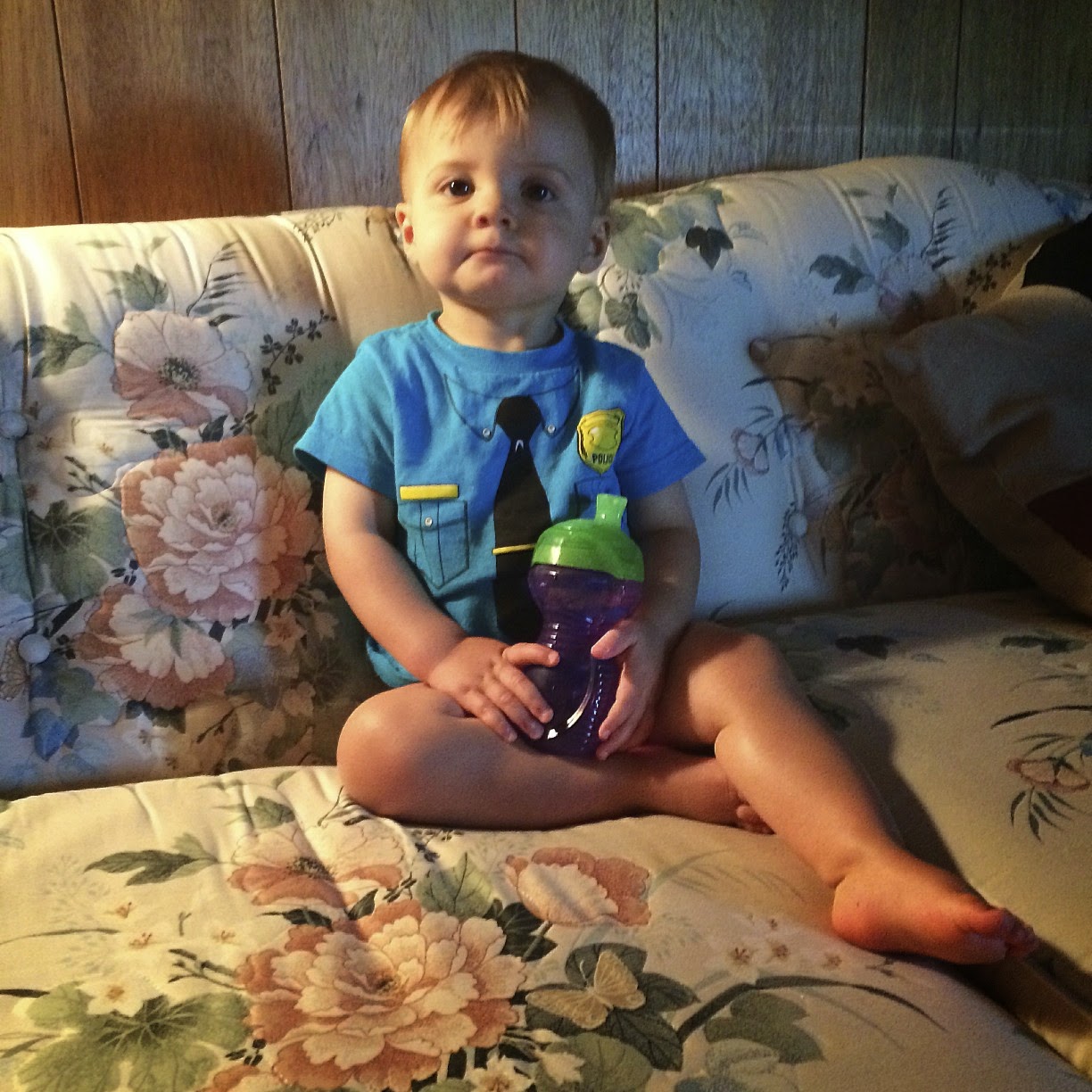 Well, a 4-hour nap later, he woke up hot as could be and still with a 101 fever.  Greattttt.  Poor little guy.  Luckily nothing else was bothering him: his ears seemed fine, no throwing up or #2 issues, and no rashes or anything like that.  He just had a fever and wanted to be held, which I took advantage of (cause he NEVER wants to snuggle!). 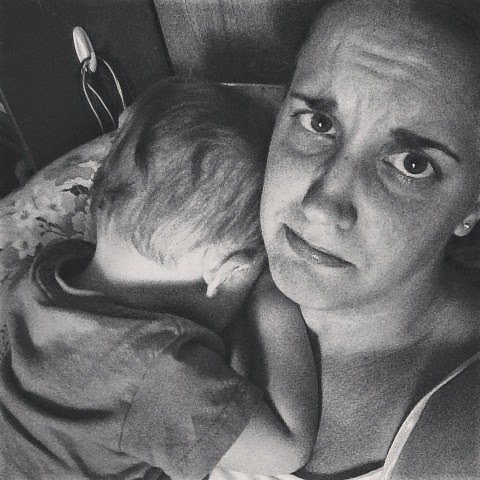 So our little man got a ton of TLC last night and a lot of snuggles, including a good 45-minutes on top of Gramps watching the Cardinals game before bath time. 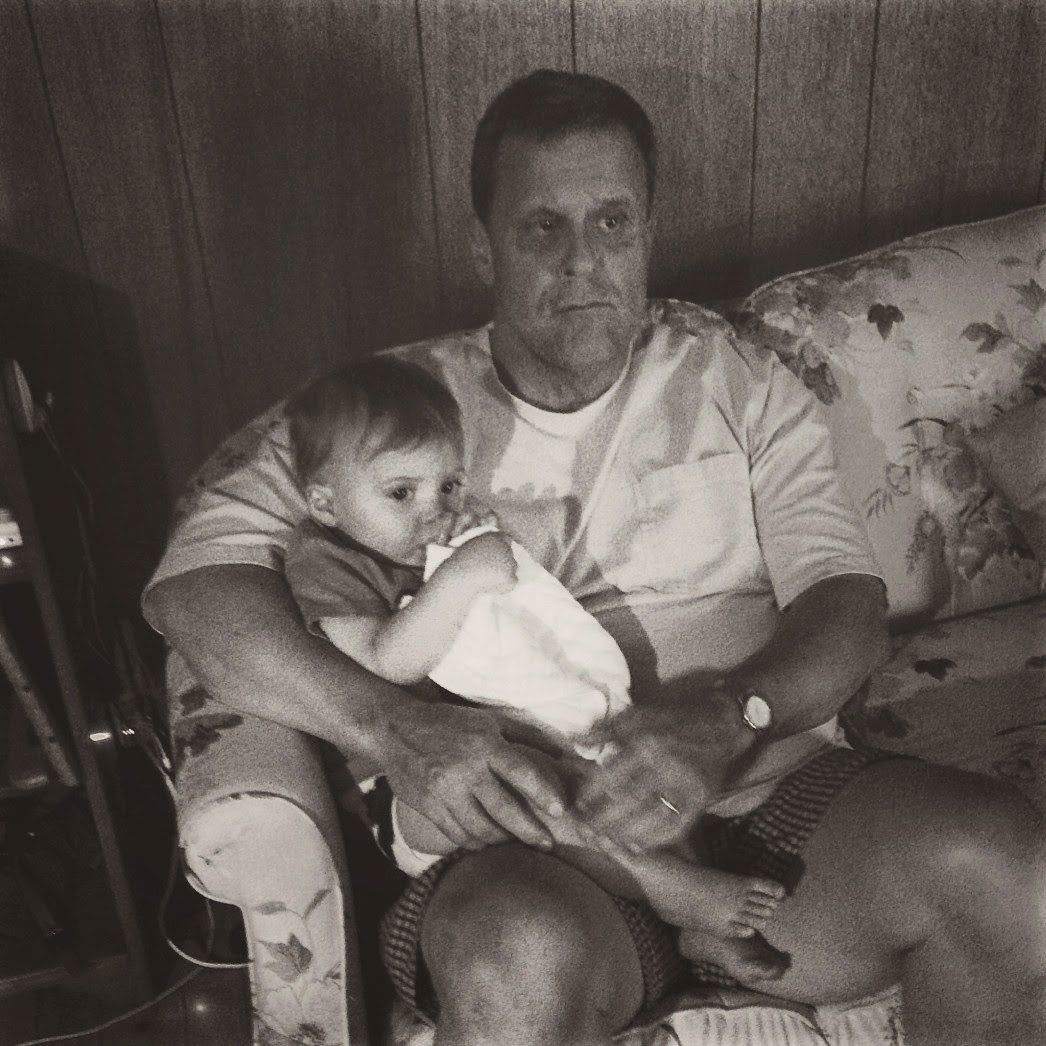 Even bath time wasn't good for him, which was a SHOCKER.  He usually loves his baths and could stay in there for HOURS.  Last night he didn't run naked from his room down the hallway like he usually does (Mike had to carry him), and then when he plopped him in the tub he started to cry.  I couldn't believe it!  Baths cure EVERYTHING!  He really must be sick.  We made Scooter come in to cheer him up, and although there were no smiles, the alligator tears definitely stopped and he was happy to have his furry brother in there with him. 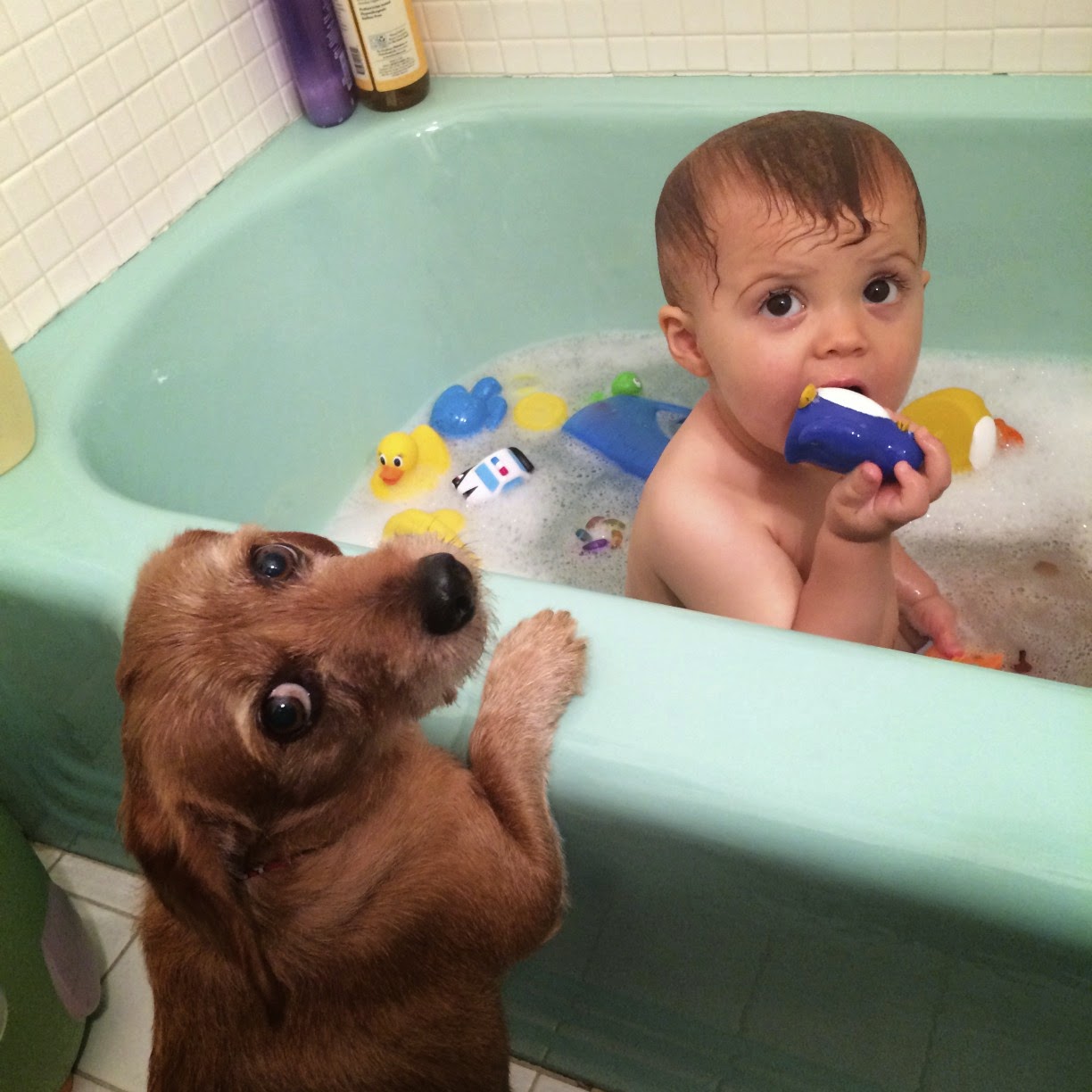 It was so strange seeing Patrick like this: whiny, mopey, and clingy--things he usually wants nothing to do with.  He didn't want to play, he just wanted to cuddle, suck his thumb, and hold his beloved cloth diaper.  He did eat a really good dinner and drank water and milk throughout the night, so I was hopeful this was just a 24-hour bug and it was going to pass.  Otherwise, I would be calling the doctor's office in the morning to see if they could squeeze us in (because I didn't want to chance not taking him and then have to wait till Monday to get him seen--or have to go to Urgent Care (boooo) if he wasn't getting any better through the weekend).

I put him to bed about 7:45pm last night and he slept till about 8:45am this morning!  I could tell immediately when he woke up that he was feeling better because he was "singing", as he usually does in the morning.  Sure enough, when I went in there he was standing in his bed giggling and excited to see me.  I got him changed and took his temp and it was back down to normal!  Woo hoo! 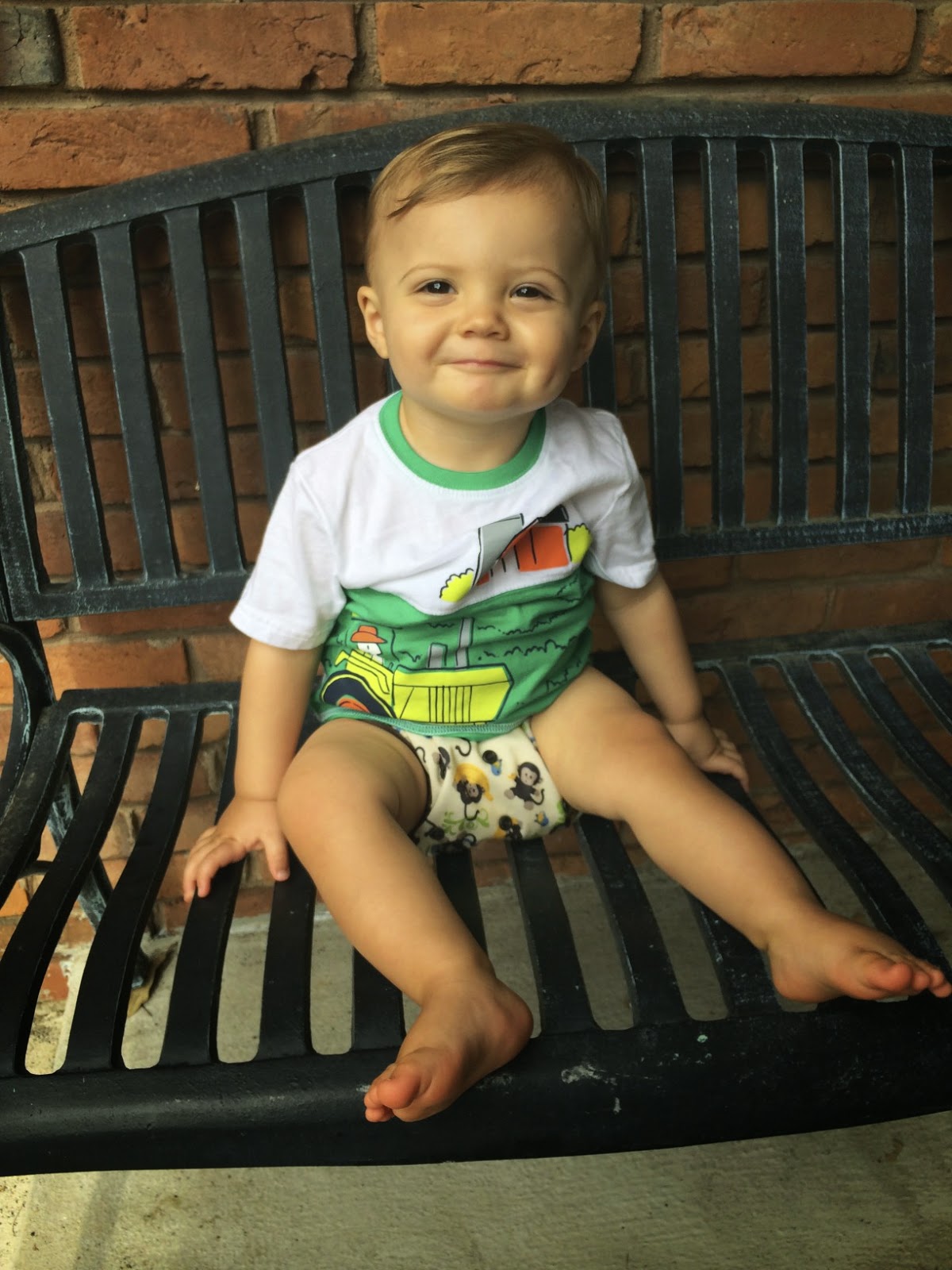 So we decided to celebrate the first official day of summer by first snapping this adorable picture of Scooter catching some rays on his Beggin' towel... 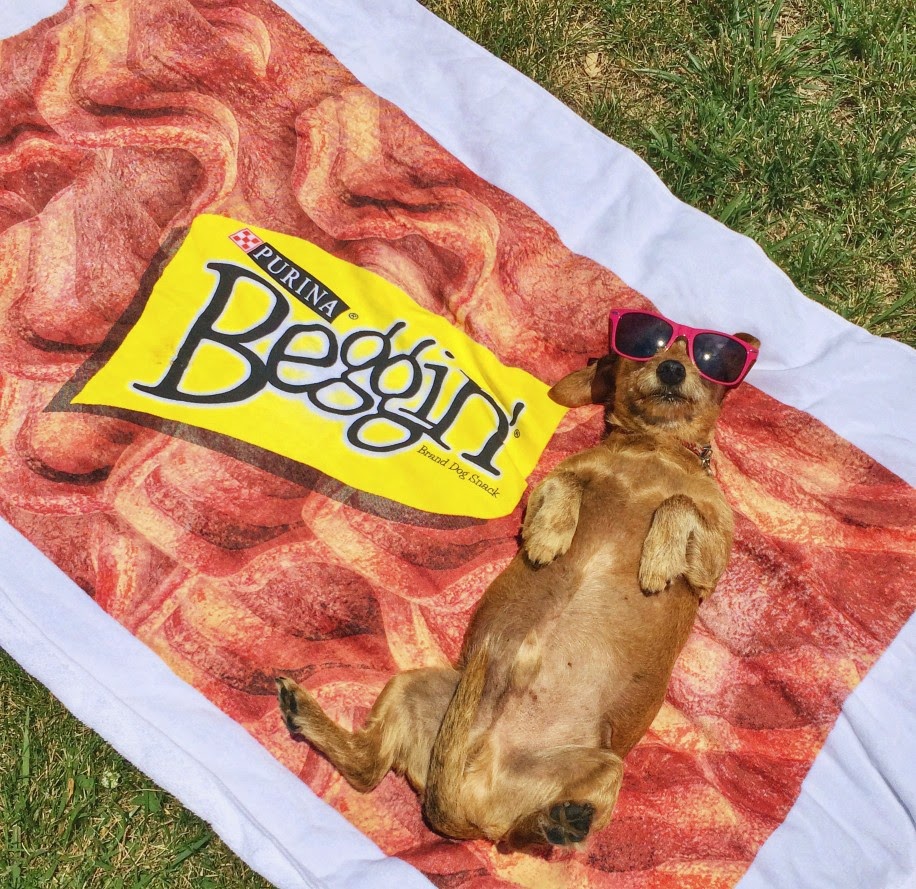 ...and then heading to the pool for some serious swim time before lunch and nap time!  Patrick was totally back to his normal self.  Swimming under the water (and notice the bubbles coming out of his nose!  He's learned to blow air out (instead of in!) when he's under!)... 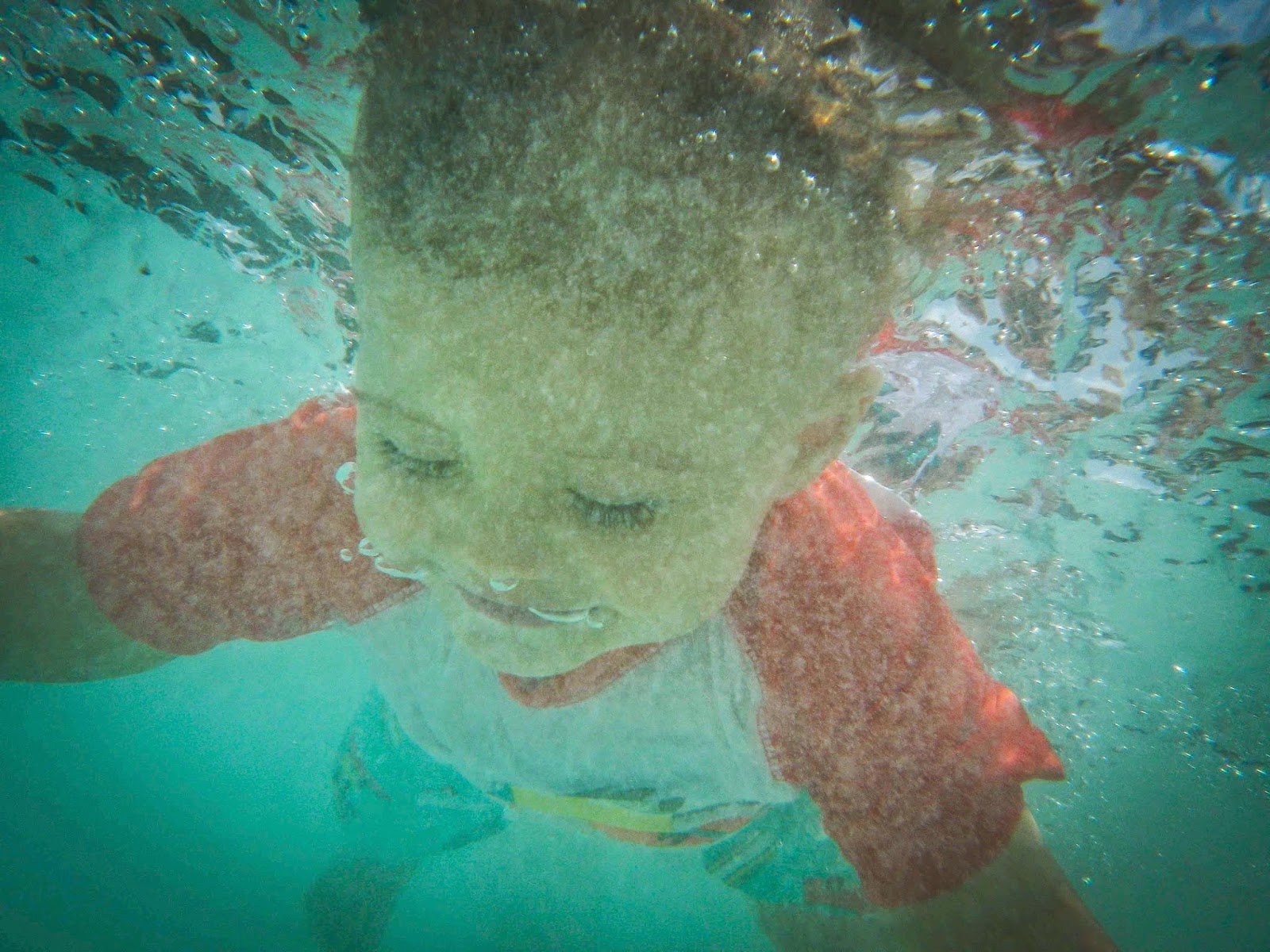 Going through the water wall... 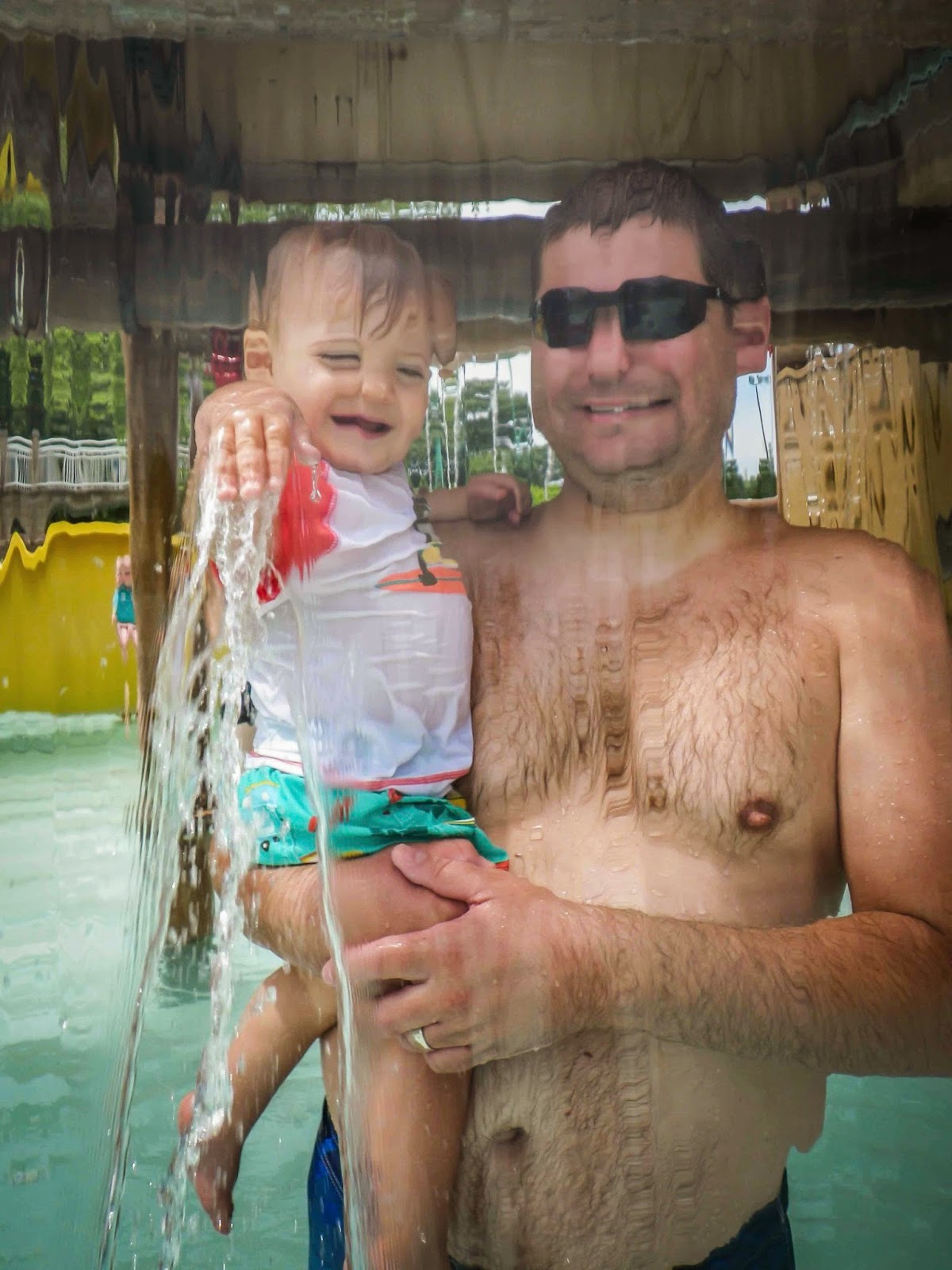 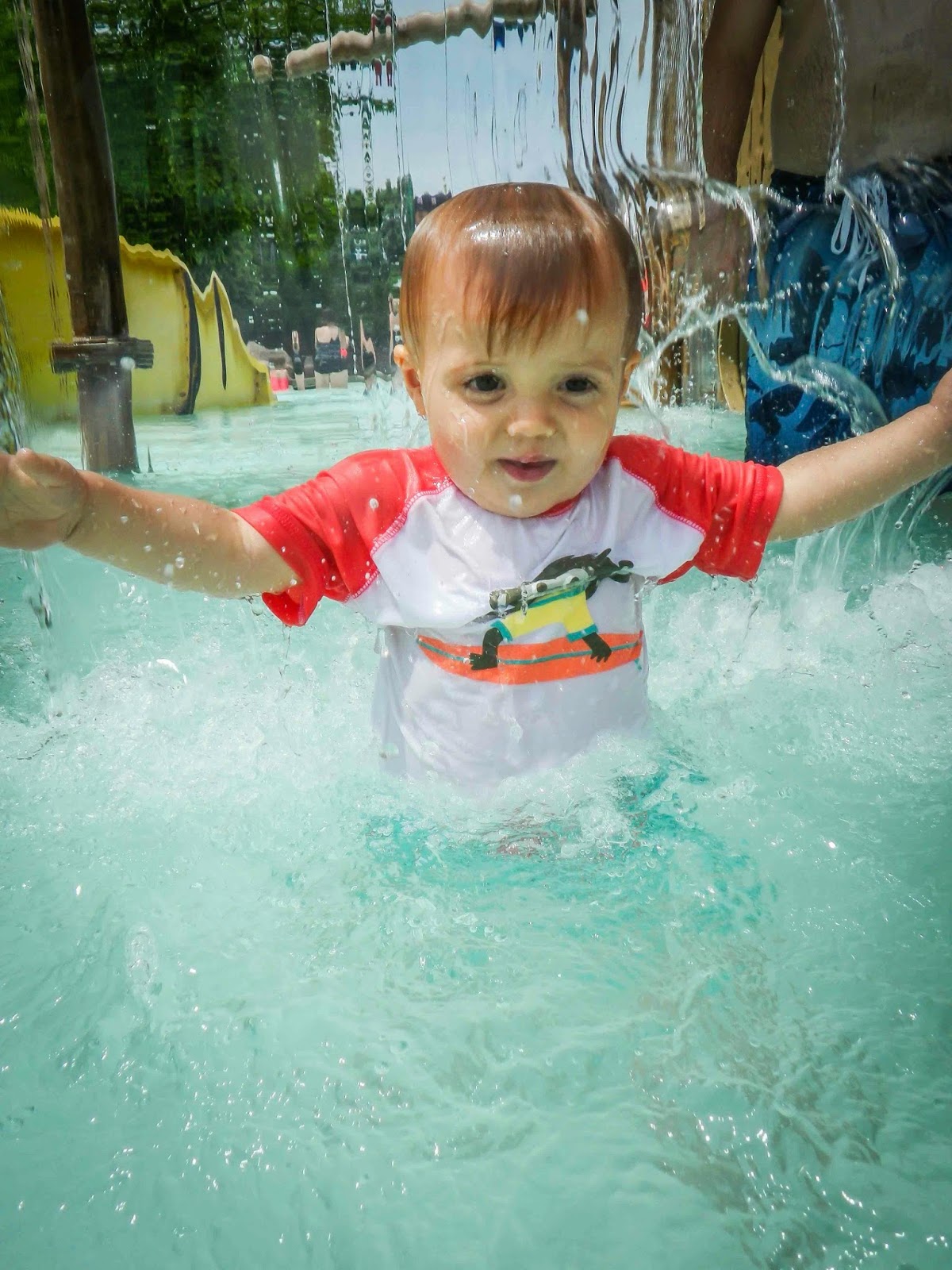 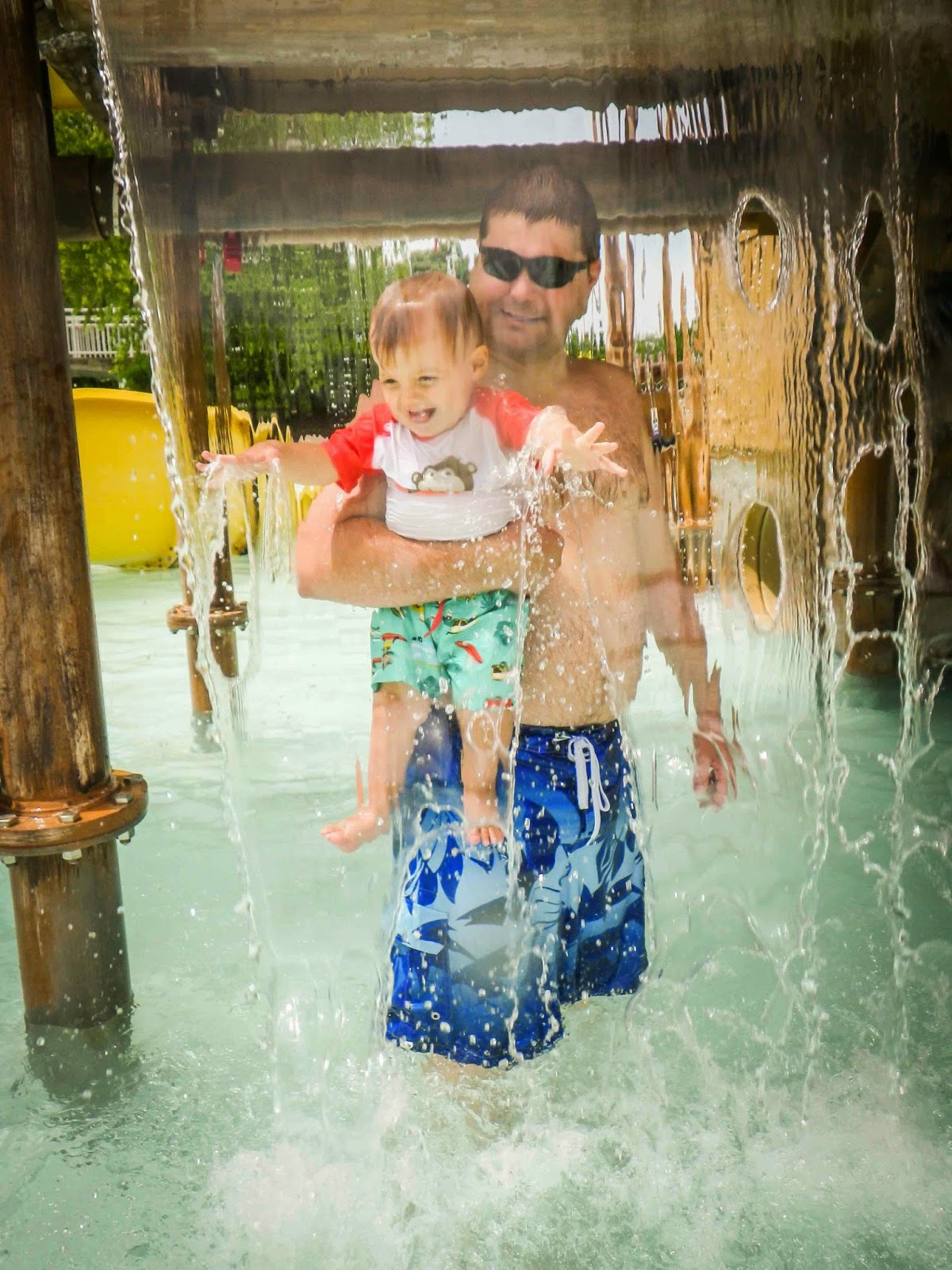 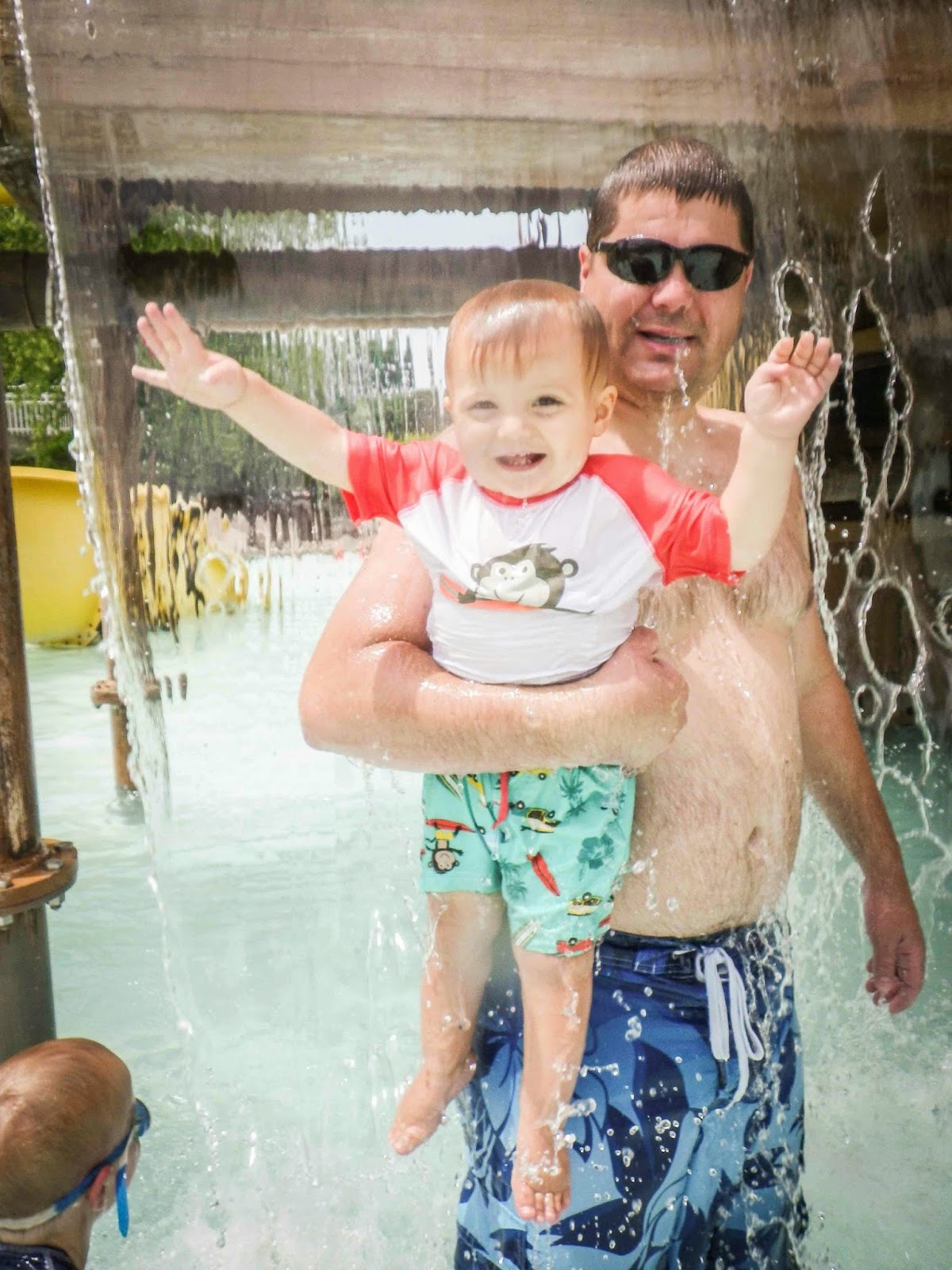 And loooooooving the lazy river with mom and dad! 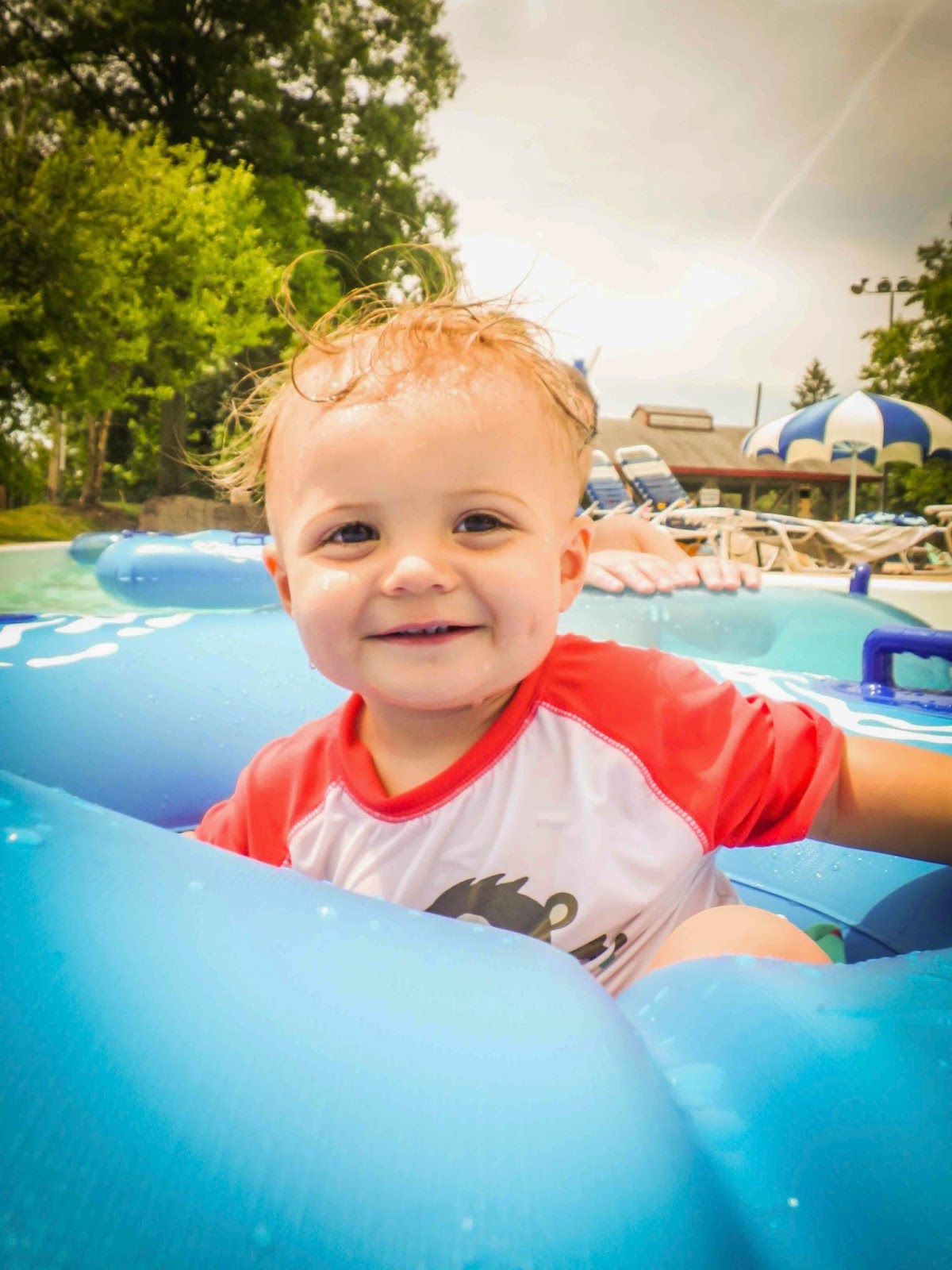 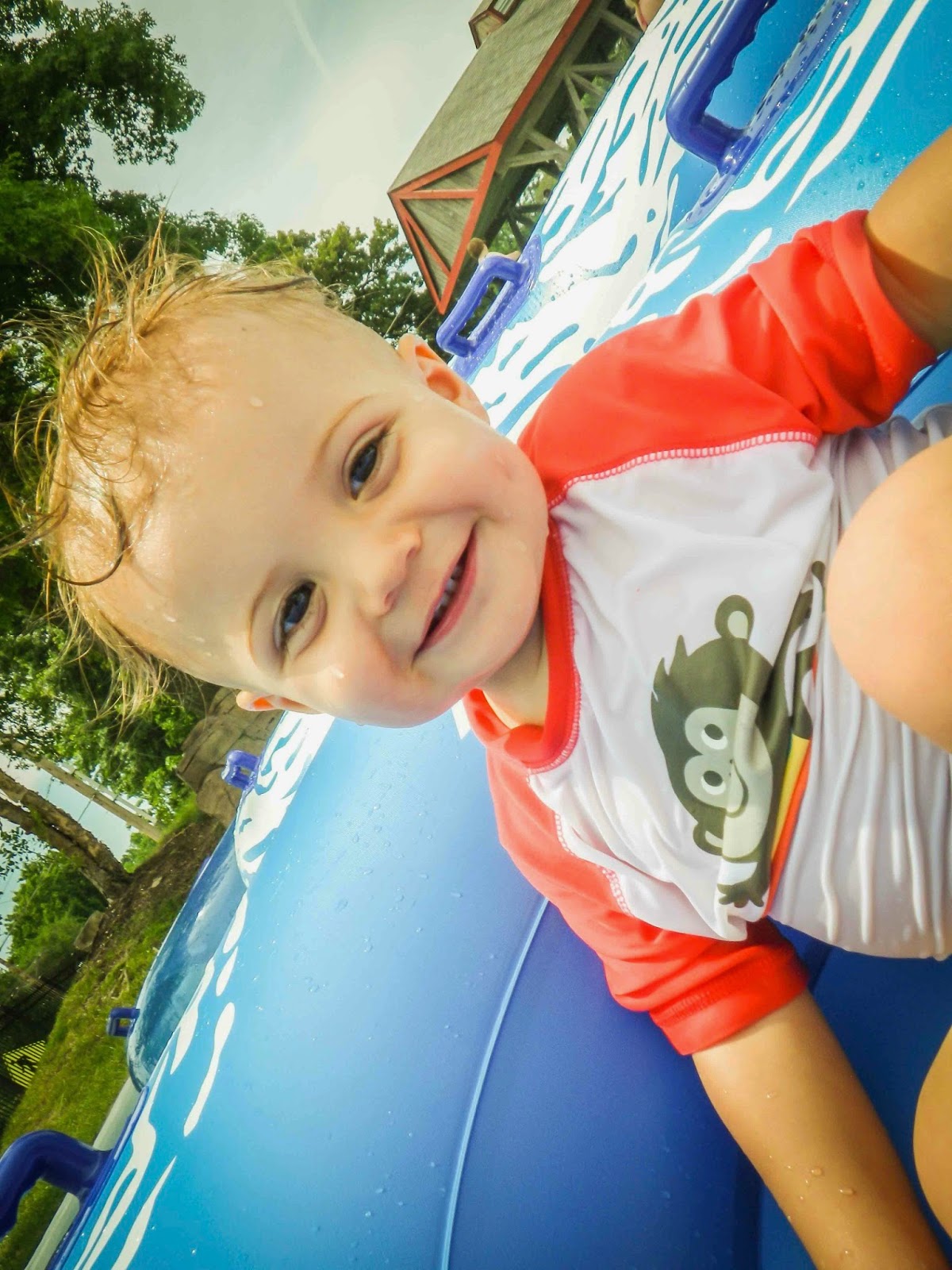 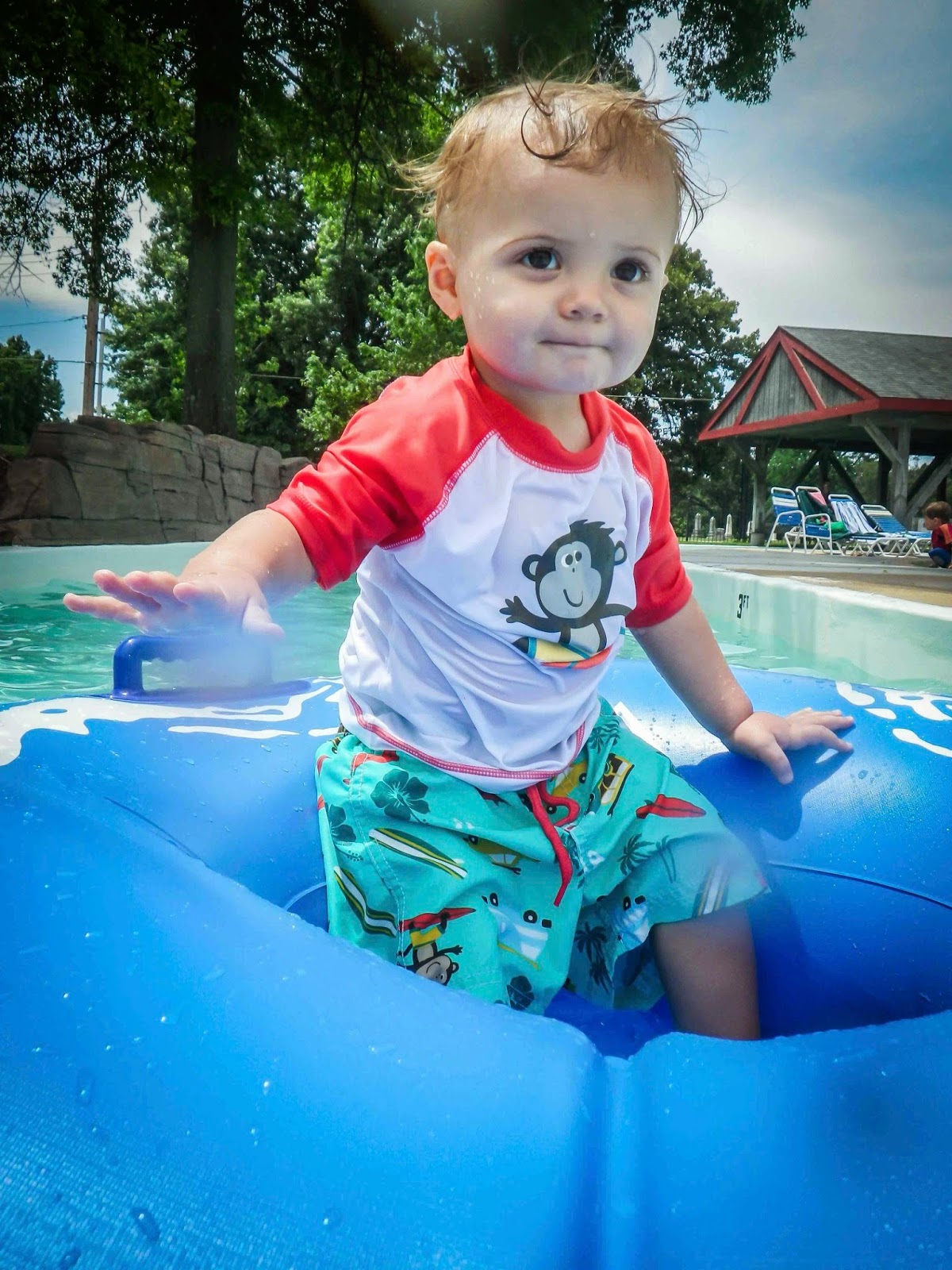 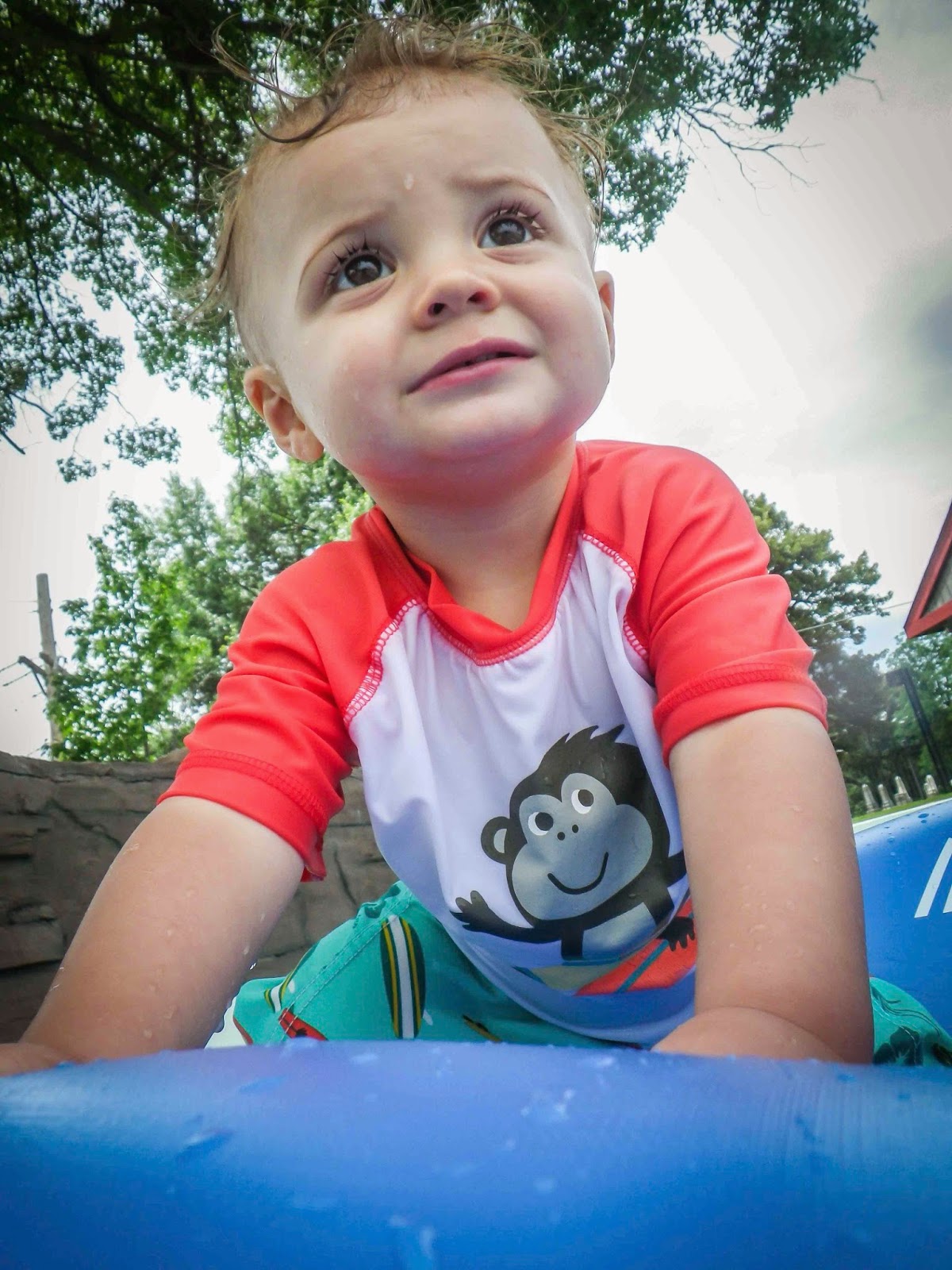 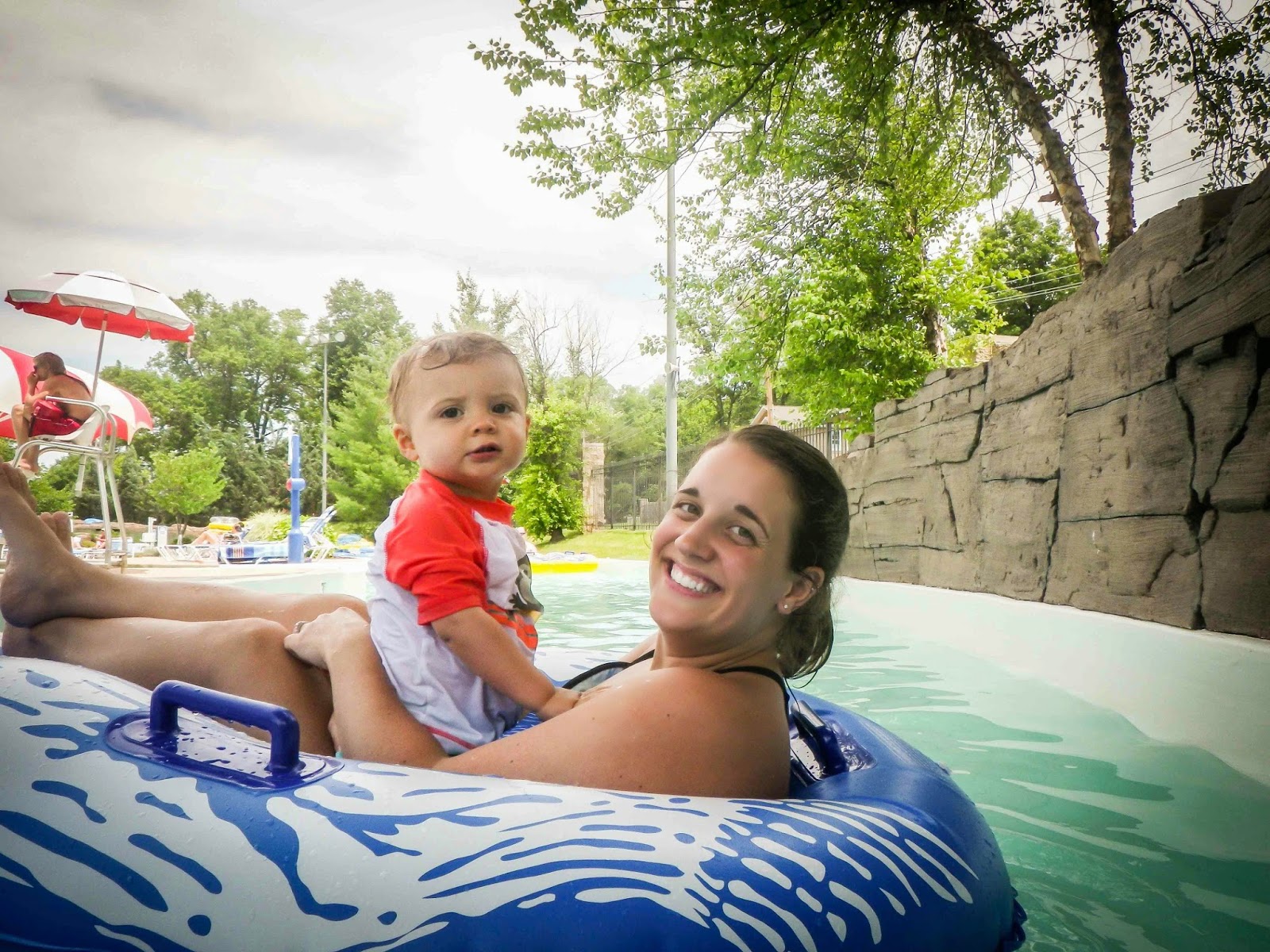 Although this was the little man's first official time being sick, it definitely wasn't too bad.  And I am so thankful that he bounced back super quick and we got to enjoy a fun day at the pool--and no trips to the doctor's on the weekend!  Woo hoo! 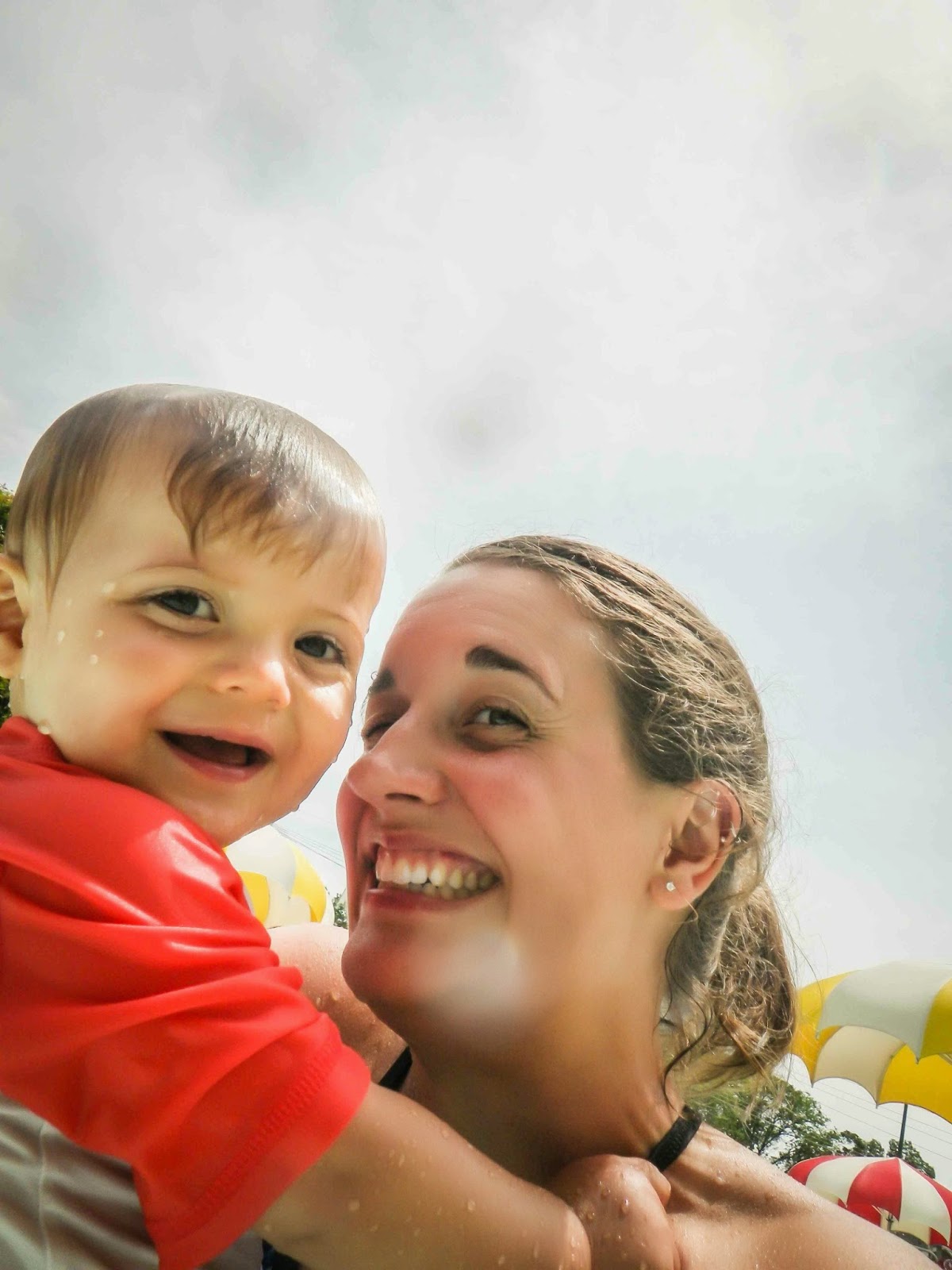 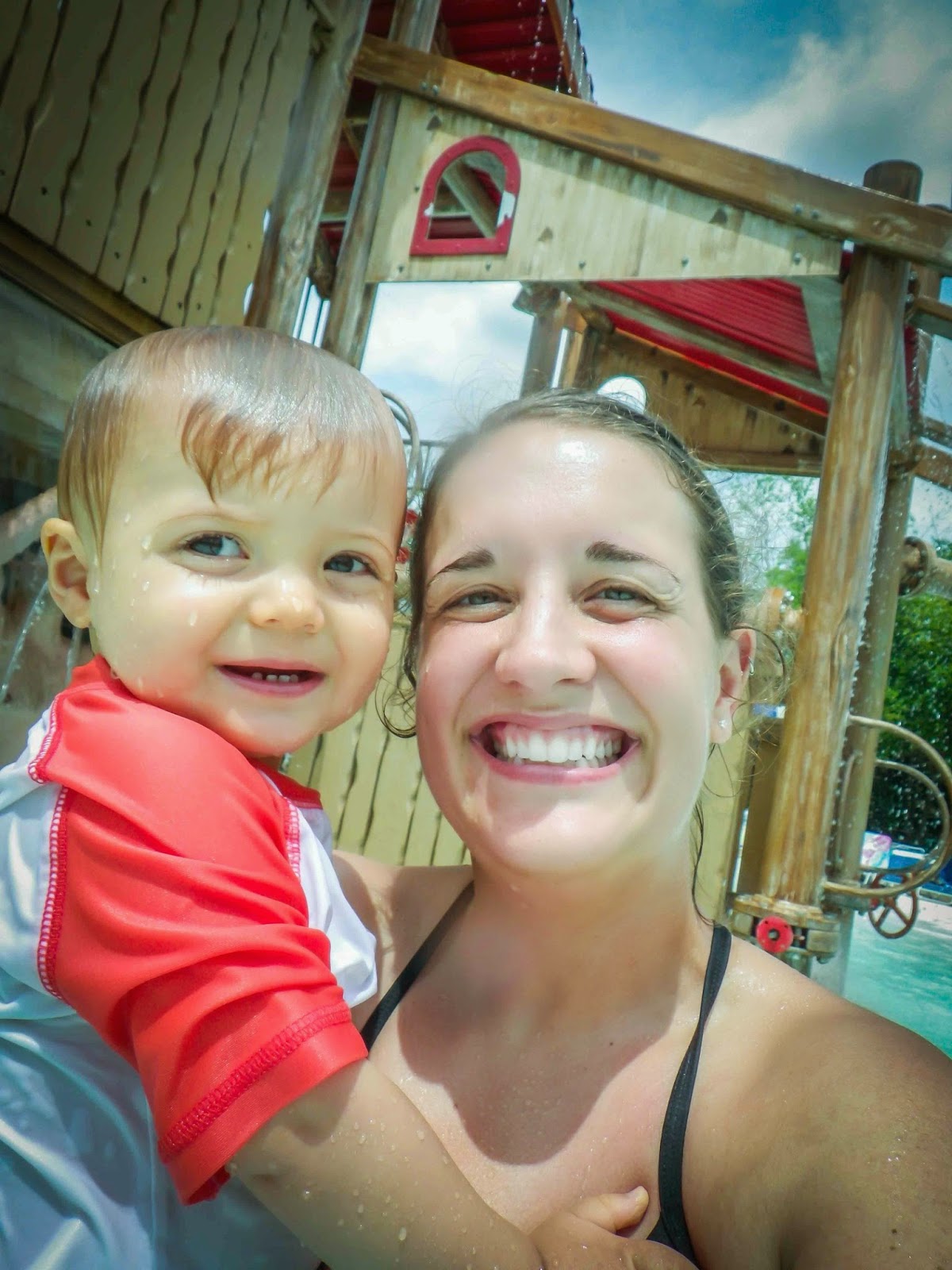 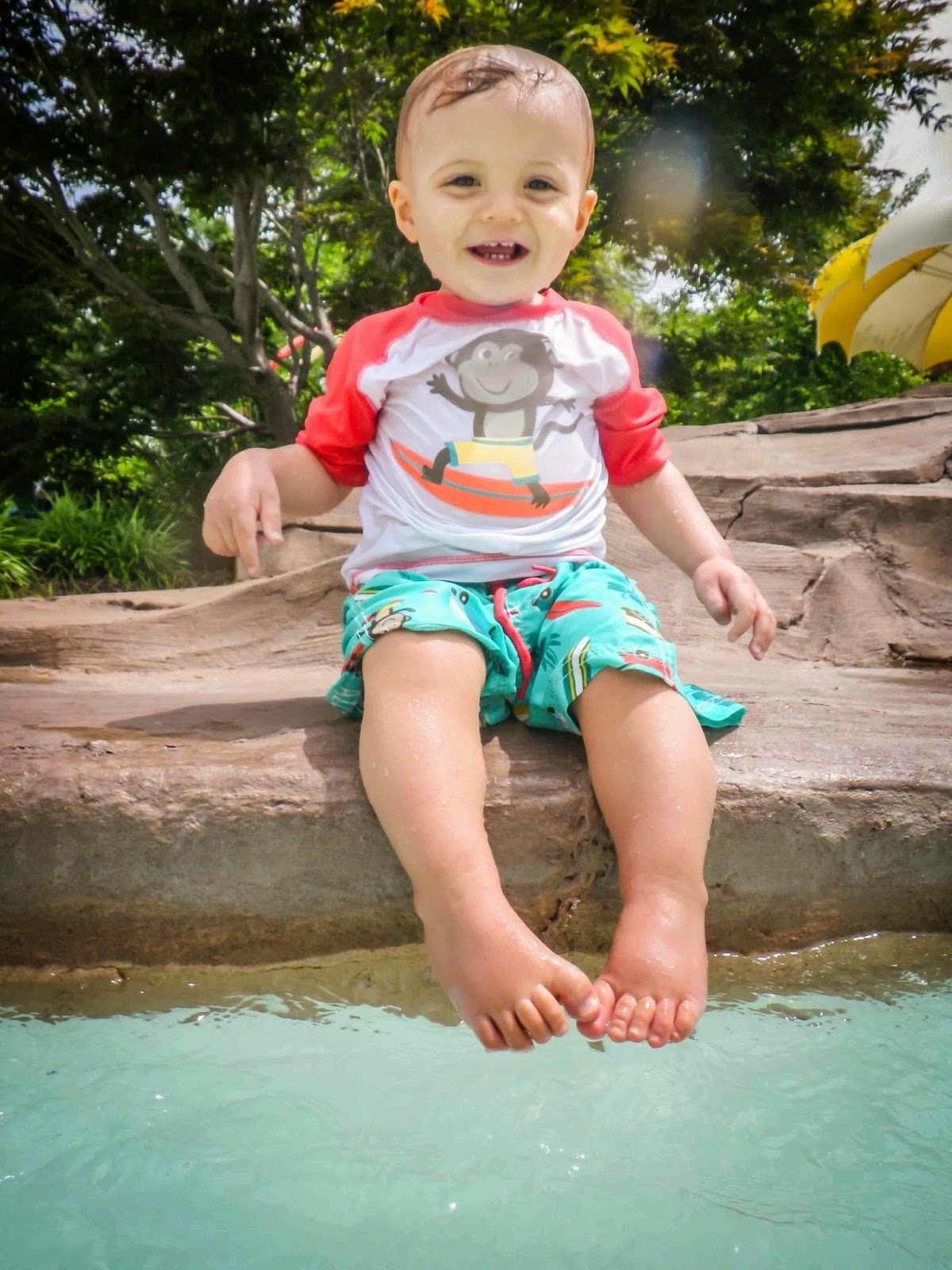 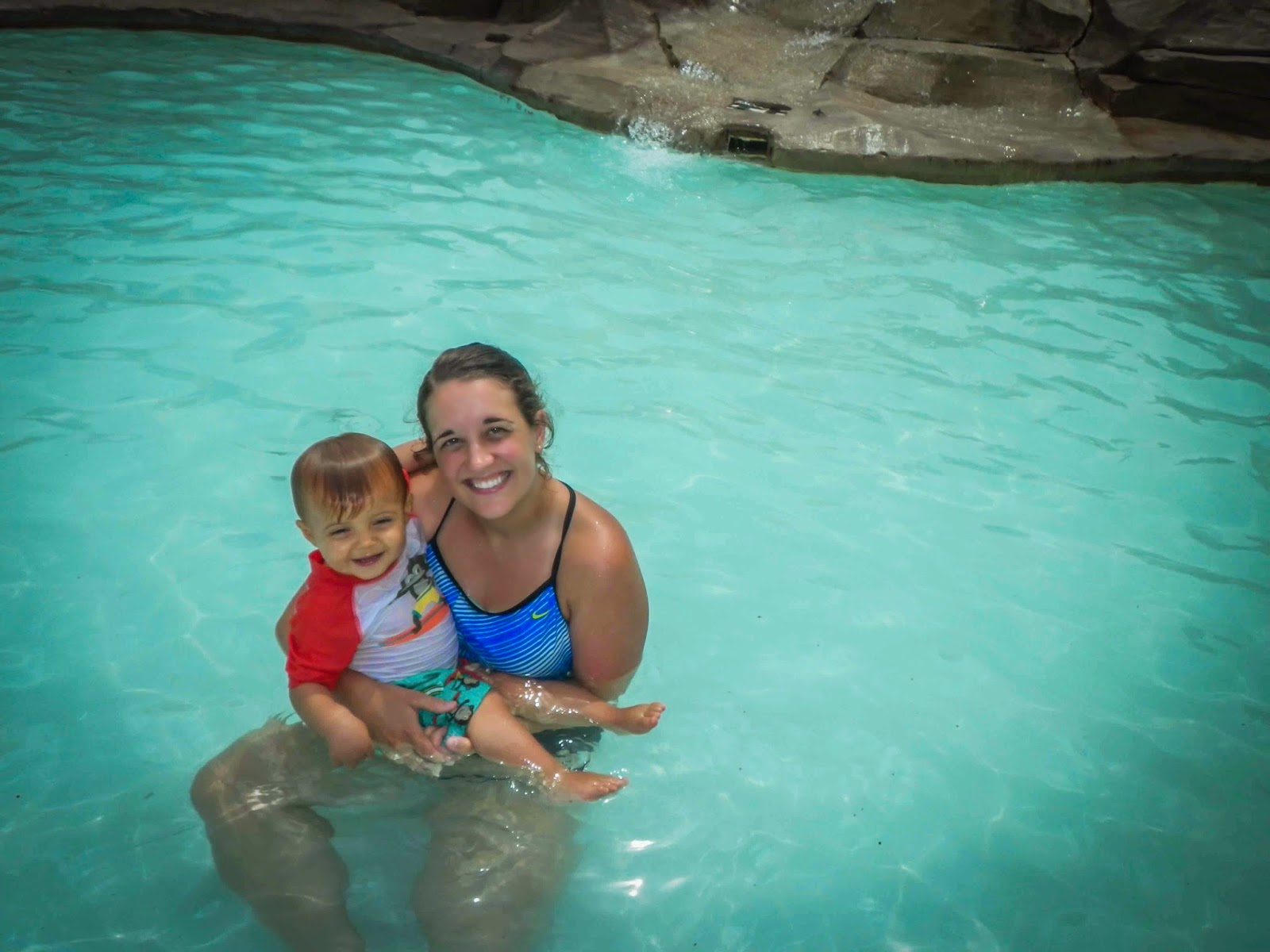