Friday, February 21st, 2014,  295 days after he was born, marks Patrick's first official visit to the doctor's office.  I am SHOCKED it took this long; besides our well-visit required baby check-ups, we have NEVER been to the doctor's office.  Yep.  Actually, until Friday too, we had never even called the doctor about anything!  Again, I am shocking myself writing this, cause I definitely thought we'd be calling her every other day.

Anyways, so you're wondering why we went to the doc.  Well, not too terribly exciting of a reason, other than Patrick had a nastttttyyyyy diaper rash.  Which, if you remember from my cloth diaper post from a few weeks ago, I said Patrick had never had a diaper rash.  Doofus Alex: I totally jinxed us!  Well, for the first 290 days of his life, Patrick NEVER had a diaper rash.  Then, on day 291, he got his first one, and oooooohhhh boy, it was a doosey.  Without going into too much detail, his little booty was raw--like looked like the skin had been burned off his tushy.  Poor fella.  We noticed this when he woke up on Monday.  So, naturally, we started packing on the A&D ointment or the max strength Butt Paste.  Well, by Thursday, his tush wasn't any worse, but it certainly wasn't any better.  Now, he totally was his normal self: eating the same, sleeping the same, not acting any different, except for diaper change time.  Then he squirmed and wiggled and whined and did not want his booty touched (don't blame him).  I told Mike Thursday, "Okay, if this isn't better after this weekend, let's call the doctor on Monday since it'll have been a week."  Well, Friday he went to my mom's and she sent me a picture at lunch and it definitely didn't look any better--potentially even worse.  She told me she would be happy to take him to the doctor for me, and said he really should get it looked at TODAY and not wait another 3 days.  Okay, okay, I caved.  So I called our doc, and the nurse told me we should bring him in because they wanted to rule out a butt skin infection or (eeeekkk!) rectal strep.  Uh, YIKES! 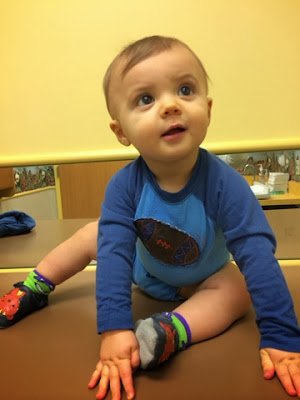 Luckily I was able to get off work a smidgen early and I was able to take him to his appointment.  Thankfully it turns out it was just a nasty diaper rash, that our doctor speculates was from acidic fruit (like the pineapple he LOOOOVES to eat in his Hawaiian delight baby food) that he ate, pooped, and then probably sat in all night Sunday into Monday.  Since it didn't spread at all and was only on his booty, she didn't think it was an allergy, and she ruled out rectal strep (thank GOD) and a skin infection right away.  Whew.  I felt way better.  She also told us her personal secret for getting rid of diaper rash: normal strength Desitin (blue and white tube).  Of course we didn't have that, nor had we ever used it, so I went to Walgreens on my way home and picked up a giant container of it.  She said to literally coat his butt with it (like "frosting" thickness!) after every diaper change, and she promised us it would clear up in a few days.  Well, just over 24 hours later, it has healed incredibly fast!  There is still a little diaper rash there, but nothing like it was just yesterday.  GENIUS our doctor is!  For all my mama friends out there: go get this stuff.  It will be our go-to for butt issues in the future!  It works super quick and is cloth diaper friendly too. 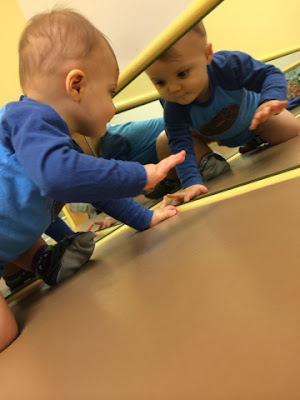 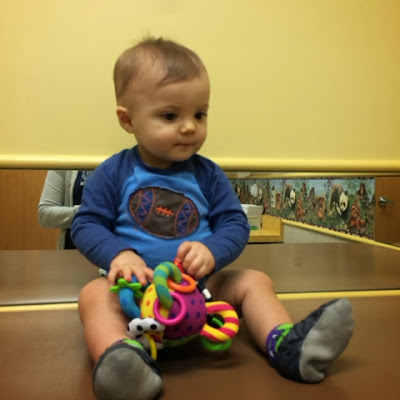 Okay, so now that you know why we had to take Patrick to the doc for the first time, here's some fun stuff about our visit: in 11 days Patrick has gained 1lb. 3oz. HOLY MOLY.  That's a huge growth spurt in less than 2 weeks!  Go buddy go!  He's now 24lbs. 2oz. DANGGGG.  This is the #1 reason why I am holding off buying any summer clothes/shoes: I HAVE NO IDEA WHAT SIZE HE WILL BE!  My guess is 2T...however, it wouldn't surprise me if he was in 3T stuff.  I'll report more on that when summer comes to see if I was right.

A few of my old softball buddies and I have been having, what we so creatively coined, an #instacatchingchallenge on Instagram.  Basically, it's a video of us tossing a ball at our kids and having them (most of the time feebly) attempt to catch it.  Every single video of my friend's kiddos makes me laugh so hard!  Babies trying to catch things are hilarious.  So if you're on Instagram and want a giggle, check out our hashtag challenge.  Below is Patrick's challenge entry from Friday while we waited for the doctor to come in.  So darn cute.

And finally, I'll leave you with some cute pictures of Patrick, who is anxiously awaiting the Cardinals' opening day for the 2014 season! 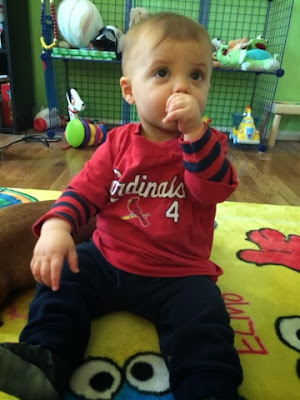 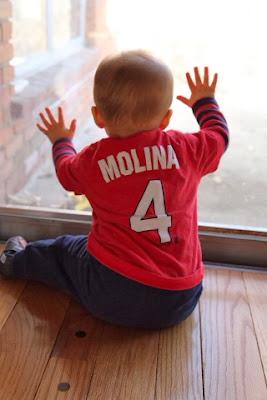 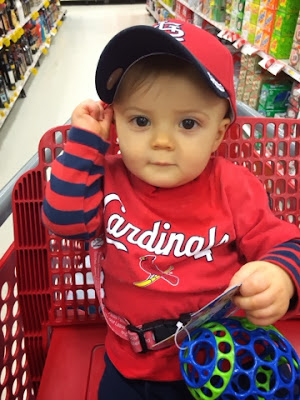 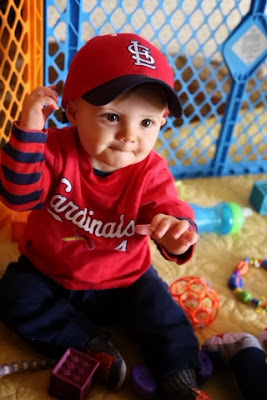 And this pic is proof that my non-snuggly boy will indeed snuggle when he's too tired to keep his little eyes open.  LOVE. 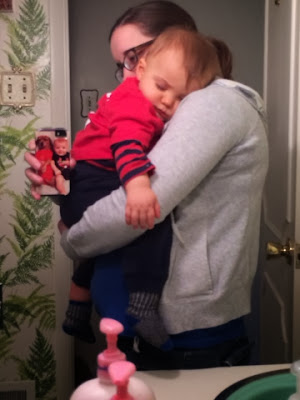