I have literally just packed up every single Dr. Brown's bottle and put them into storage.  Until the next kid, bon voyage bottles! 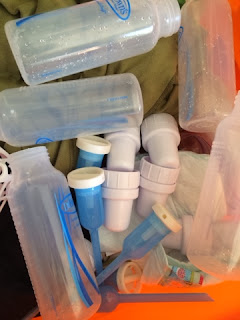 So this post is both exciting and saddening to write.  First off, I am excited to be DONE with the bottle.  Seriously.  As awesome as those Dr. Brown's bottles are, they SUCK to clean.  There seems like there is a million pieces (okay, 6, including the bottle) and we've never had enough to be able to toss them in the dishwasher to clean, so we hand wash them.  And they're freaking expensive (back to the reason why we don't have many of them--it's like $15 for 3 of them. yikes).  Plus, every 3 months you're suppose to change the nipple level, so you have to go out and buy all new nipples (expensive).  I know, I know, I could keep the same one on the entire time and never change it, but boy, it does make a difference.  The milk shoots out so much faster (and gets consumed so much faster) when you go up a size.  Plus, for the most part, I'm a rule follower, so when Dr. Brown says to switch to level 2 nips at 3 months, I do it.  Sippy cups are way cheaper: for $15 I can get double the amount of sippy cups...and, (best part), there's only TWO pieces that can go in the dishwasher safely!  We are liking the Nuby brand 6+ month sippy cups right now.  Anyways, so those are the reasons why I'm really excited Patrick is done with the bottle. 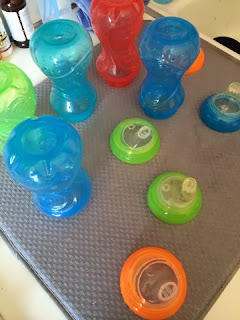 Now, onto the sad part: no more bottle means my baby is no longer a baby.  He's entering into the toddler stage.  He's been mobile for a while, which is another indication away from him babyness, but we have been holding firm with the bottles and still feeding them to him like when he was just born.  Our doc says we need to wean the bottle by 1 year, and (gasp!) that's about 7 weeks away.  So, as much as it pains me to get rid of something that was connecting him to still being my little 10lb baby, we have to say goodbye and move on to the next stage: the sippy cup. 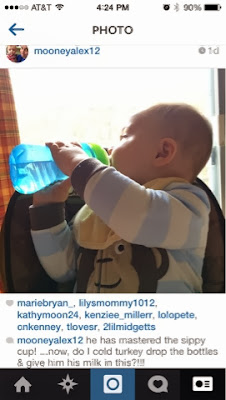 Now, I posted the other day on Instagram that I was pretty confident that Patrick could do milk from a sippy cup--he'd only ever done water up to this point but seemed to have a good grasp on it (literally) and could hold and tip it himself and suck the water out.  I think every single one of my IG mom friends said, "Do it!  Ditch the bottle cold-turkey and do the sippy cup."  Gulp.  Okay.  I was going to do it.  I was going to try last night but I backed out at the last minute...figured we'd need a fresh start on a new day to tackle this. 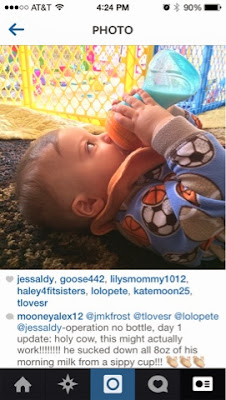 This morning Patrick had his usual 8+ ounces of milk...but this time from a sippy cup.  And, to my amazement, he drank it all BY HIMSELF!  I don't think he even noticed that it wasn't a bottle.  I didn't have to fight him or anything!  And then, for his post-nap milk, he again drank (most) of it from the sippy cup! (disclaimer: he usually only drinks about half of his milk post-nap).  Woo hoo!  So, being confident as I am, and determined that we are done with the bottle, I packed them up and put them away for good.  I really hope his bedtime milk goes just as well tonight...stay tuned for an update with that.  Here's to my little growing (gulp) toddler and another milestone he's accomplished! 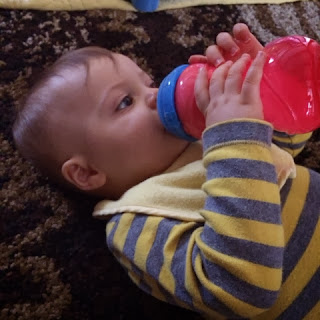