Okay, disclaimer: this post is about boobs and breast milk.  So if this makes you uncomfortable or not your cup of tea, skip this post.  For all my mama friends--and soon to be mamas--keep reading.  This post is for you.

This is a post I have wanted to get down for a while, but always go back and forth with "Is this too much information about myself to put out there publicly?"  Obviously there are plenty TMI things I would never post, but when it comes to the act of simply feeding your baby, I really feel like there is no TMI line.  And, were it not for other mamas out there who blogged about their breastfeeding and pumping experiences, I would have missed out on so much information.  So I decided I'd write this post; if for nothing else, I hope at least one mama or mama-to-be out there finds it useful (...or, I'll remember exactly what I did next go-around with kid #2!).  And I want to say that this post is NOT meant to be braggy--quite the opposite: I'm hoping my story can help others on their milk producing journey.  And if you don't go down this path or try and it doesn't work out, remember this: "breastfed or formula fed: who cares as long as they're eating!" (read the rest of the post where I snatched this quote from here at Six Time Mommy) 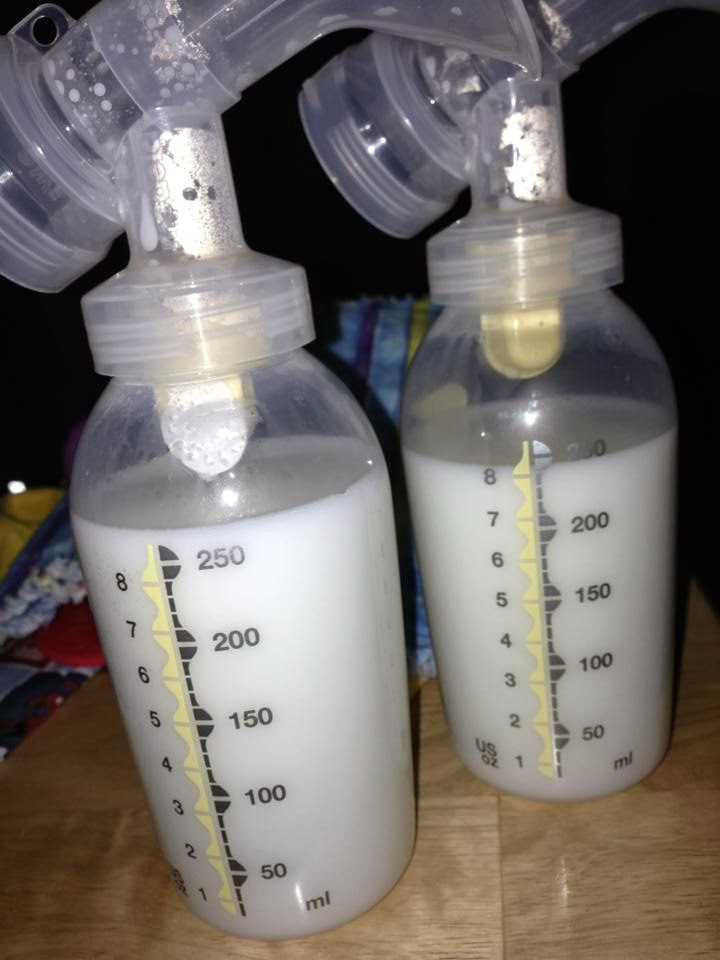 Yes.  Extreme.  But I am sooooo thankful I was able to produce that much milk.  Because, a little shy of Patrick's 8 month birthday, I decided to stop pumping, get my body back, and have enough frozen breast milk to get him to his first birthday--my breastfeeding/pumping goal from the get-go.  Also, I will point out to you: I was able to donate over 1000 extra ounces between August and November of 2013 to a little gal who loved her some mother's milk. 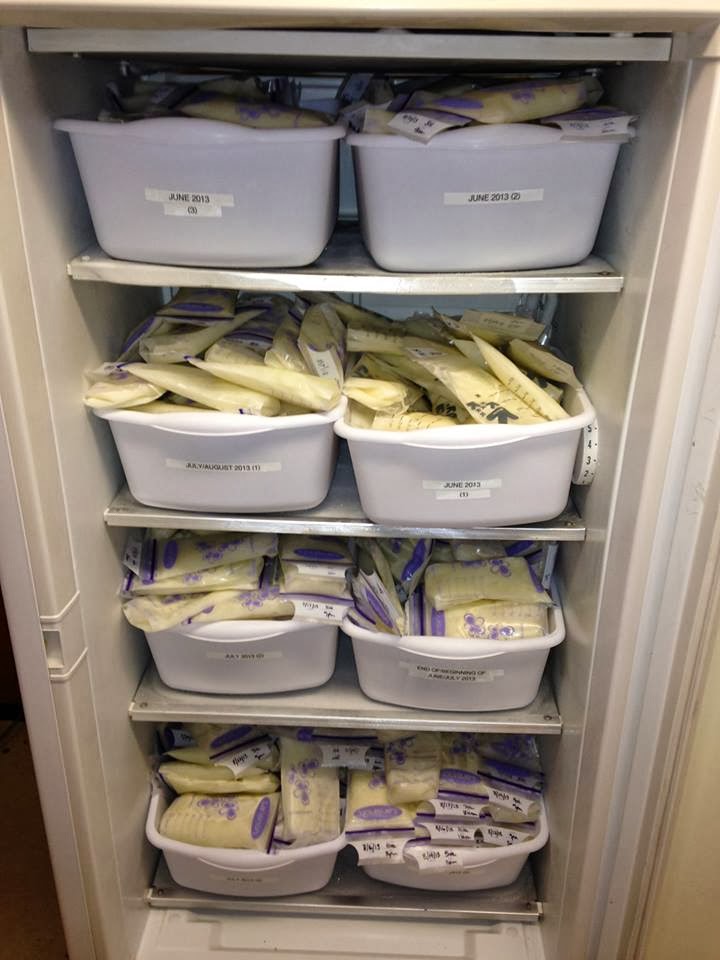 Yup. That was my stockpile when I stopped pumping...plus some extra in our two other top freezers.  Are the words "dairy cow" coming to mind when you see this?!  They do for me.

So great.  I was able to produce a ton of milk and stop pumping early.  Well, I want to let you know how I was able to do this.  Now, part of this might be genetic: I may just be a milk-producing machine.  However, as may be the case, I am convinced it was my pumping/breastfeeding combo regime I started from day 1.

Before Patrick was born, we decided to take a breastfeeding class at the hospital we were delivering at.  I was gung-ho about breastfeeding--I knew it'd be the best thing for my baby and I would have a solid 3+ months to dedicate to it before I had to go back to work.  I knew--and am thankful for!--that formula was an option if breastfeeding didn't work out, but that was my backup plan: I wanted to breastfeed and was determined to make it work.  Anyways, the class we went to was fantastic.  Our lactation consultant Linn--who was the same gal we'd have after delivery--was great.  She knows her stuff.  And she encouraged pumping from day one to stimulate your milk production.  She said your milk supply is really "set" in the first week or two of your baby's arrival--so if you want to increase your milk supply, you best start early.

So if you remember my post a month or so back about our NICU experience, you remember that every 3 hours I had to get myself out of my bed, be wheeled down to the NICU, feed Patrick, go back to my room, and head back down there about an hour and a half later to feed him again.  Post c-section it usually can take 72 hours or so for your milk to come in.  Mine came in about 36 hours later--which, for a c-section delivery, is quite fast.  By Saturday evening, after feeding Patrick and going back to my room and pumping them, I was producing about 2-3 ounces total out from both breasts.  And it only increased from there.

For the 5 days I was in the hospital, I would pump after I fed Patrick (usually about 4 times a day--so not after every time I breastfed him, but after about every other time I did) from my breasts for about 10-15 minutes.  Per Linn, this stimulates the milk glands and "tricks" them into thinking the baby is really hungry and demanding a ton of food = more milk being produced.  For me, this worked like a charm.  Patrick would eat from me, then I'd pump--really jump starting my milk production.

This is what I did for the first week: I would feed him, then about 4 times a day, I'd pump immediately after I fed him.  I really think this was the kicker in my increased milk production.  My boobs were thinking this kid was super hungry and were on overdrive producing milk.

After the first week, we wanted to introduce a bottle, just for the fact that we wouldn't be a slave to Patrick's eating schedule on my boob, if for say Mike and I wanted to go out to dinner or have a few hours alone.  So week two I started substituting a breastfeed for just a pumping session.  This pumping session was about 15 minutes, and took place instead of feeding Patrick.  The second week I cut down my pumps post breastfeeding: I would pump for one full session while Mike fed him a bottle, and then once or twice a day I'd continue to pump after I breastfed him.

By week 3 (and you're going to HATE me for this), Patrick had surpassed 12 pounds, and it seems that 12 pounds is the magic number that makes babies sleep through the night.  Well, not kidding, as soon as he was 3 weeks old, this kid was sleeping 9pm - 5 or 6am.  WOWZA.  Yeah, the first night he did this I thought it was a fluke.  Nope.  Definitely not.  Well, by week 3 my boobs were on a schedule--they needed to be pumped or sucked on every 3-4.5 hours.  By week 3 I was also set in my schedule: Patrick would either feed on my boobs or get a bottle and I'd pump.  I no longer was needing to pump after breastfeeding him.  My milk supply was in and there was no need to continue to ask for more.  So that first night when Patrick didn't wake up at 1am for his feeding, my boobs were going to explode.  Naturally I got out of bed, pumped, and had a bottle ready cause I just knew any minute he'd wake up and want to eat (he never did).  This was mid-May.  Patrick slept through the night since 3 weeks old, yet I would get up every single night at 1-2am and pump because my boobs were going to literally explode if I didn't--and they were my alarm clock too.  They woke me up.

At 8 weeks Patrick moved to a 12-hour sleep schedule.  He'd go to bed about 8-9pm and sleep till 8-9am in the morning.  So by 2 months I was getting up twice a night (1-2am and 6-7am) to pump while my little babe slept.  This is one of the reasons I had such a huge stockpile: that was about 25 ounces pumped out that he wasn't eating...so it got frozen.

Another thing that I think helped my milk supply was my liquid intake.  I became a huge water drinker--like I could never get enough water.  Supposedly the more hydrated you are, the more you're going to produce.  So drink that water!  Gatorade is suppose to help with your hydration (duh) but also your milk supply.  Now, I was not a supplement or herbal gal: this extreme pumping and milk supply was (I believe) from starting to pump day 1 when he was born.

So my extreme pumping story fades a bit in September when I went back to school and, per my schedule, had to wean myself from so much pumping because I didn't have enough time.  I would still nurse Patrick once a day--but it got really hard with me working and such.  By 6 months (when he first bit me--ouch!!) we had stopped breastfeeding all together and strictly was pumping and bottle feeding.  Being a working mom and trying to nurse was really hard, and since Patrick was taking a bottle most of the time (and, spoiler: milk comes faster from a bottle nipple than a real one!), he was more interested in that and less with my boob.  Oh, I did stop my middle of the night pumps by the time school started too--I wasn't about to wake up on my own in the middle of the night if I didn't have to attend to a screaming baby.  Uh-huh.  I wanted my sleep.

A good friend told me that your body responds to what you want it to do.  If you want to stop pumping, or cut out a pump, or decrease how much you pump, tell your body.  Your body only takes a couple of days to listen and switch its schedule to fit what you want.  She was 100% right.  When I started to wean myself, it did suck the first day or so feeling really full and engorged when I should be pumping but was skipping it, but by the 3rd day my body listened and responded and no longer did I have that feeling.  When I decided to stop in December, the same thing happened--it just took a little longer since I was completely stopping: my body listened.  I wanted to stop, and after a week or so, my body answered.  If you're weaning pumping, my advice is to map it out and do it slowly: cut out a pump every week, decrease the time you are pumping, and get yourself down to just one pump a day for a good week or so and then decrease the time.  It makes it much less painful doing it by weaning rather than going cold turkey.

My goal with this post was to give my mama friends some insight on my extreme pumping/milk production world, and offer some tips on what worked for me (and hopefully works for others!) in regards to stimulating milk supply, breastfeeding, and pumping.  I am no lactation consultant, but I really think that pumping alongside of nursing from day 1 is what really boosted my supply and allowed me to produce so much.  And obviously I can't promise this will work for everyone.  I know there are some ladies who do everything in the books and they still struggle with milk supply.  I want to reiterate, PLEASE don't take this post as braggy--I don't mean it like that at all.  I just know that I found posts similar to this very helpful when I was pregnant and exploring nursing/pumping options, so I am merely sharing my experiences and success in hopes that it may help out someone else.