I posted a week or so ago about how we ditched the bottles for Patrick.  I wanted to give you an update on the no-more-bottle-sippy-cup-only situation.

First off, tragedy has struck: my last month and a half frozen supply of breast milk has gone bad.  To say I'm upset is an understatement: I am a wreck.  Now, don't get me wrong: I am so happy I was able to breastfeed my son and excessively pump for as long as I did to create the stockpile I had as well as donate over 1000 ounces to another mama/baby.  It just sucks that we are so close to my "year of breastmilk" goal and we didn't make it because my milk went bad.  I'm not sure what happened, but I suspect that I pushed the 6-12 month limit of frozen breast milk in a deep freezer.  I guess I just assumed 6-12 months meant it would be good for 12 months.  Well, now I know that with my milk and our deep freeze it's really only like 6 months that it's good.  Stupid me too, when we moved all of my nicely organized by date milk got mixed up and jumbled together: September was with May, August was with November.  Anyways, I didn't take the time to reorganize it when we got settled, because (dumb Alex) assumed that I had 12 months to use it anyways, and it'd be well before 12 months when we got to using the July or August supply.  Well, what happens when you assume?!  Yep.  I was wrong.  The last month and a half supply of milk I have in my deep freeze is all the oldest milk: from July and August.  And (TMI?!  sorry...), when thawed, it all smells awful = bad milk.  So yes, I'm way upset, because I thought I had a plan and this all laid out perfectly and then my plan got thwarted and tossed on its backside because of bad milk. 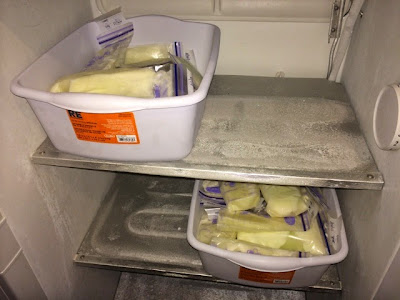 boo hoo: all of this liquid gold is bad. I haven't tossed it yet...I can't bear to pitch it just yet :(

Anyways, the moral of the story is that now I know for #2 that my milk only lasts about 6 months in a deep freeze, and that I need to use the oldest stuff first.

So, sippy cup situation: it's going okay.  Actually, that's when we figured out my milk had gone bad: a few days after my post about ditching the bottles, Patrick, who had been sucking down his milk from the sippy cup like a rockstar, all of a sudden would take one sip and literally launch the cup across the room.  Uh, whattttt?!!  Dude.  You liked it for like 3 days no problem, and now, you won't drink it at all?!!  After doing this a few times (both in the morning and after nap), Mike uncapped the sippy cup and holy rancid smell.  It was awful.  It smelled super plasticy, so we thought that warming up the sippy cup (just setting it in hot water) was essentially contaminating the milk and making it bad.  So I went out and got some different sippy cups (stainless steel ones, thicker, chunkier BPA free plastic ones), but it still had the same smell.  Duhhhh. It was the milk (I think I didn't want to admit that to myself).  This is when my milk depression started.

What were we going to do?!!  This kid has only had my milk and a little organic vitamin D milk...never anything else!  We talked about just doing the organic whole milk by itself, but our doc was really adamant about getting him to 12 months (or within a week or so) on breast milk/formula because of the nutrients and vitamins and such they have in them that whole milk doesn't.  Poop. 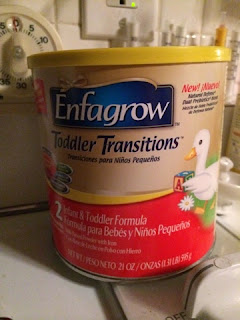 So, I went out and bought a can of Enfamil formula.  I should mention it took me about 10 minutes to pick this can out.  I had no idea what I should get or what I should look for!  This said 9-18 months, "transition" on it, and it was on sale for $19 with a $3 off coupon.  So I went with this one.  This is the first time we've had to pay for Patrick's (liquid) food.  Dang.  That stuff is expensive.  All you mommas out there that do formula on a regular basis, my hat is tipped to you.  Formula is just as much of a commitment as breast milk is.  Time and money commitment.  Anyways, so we decided we'd give him formula but mixed in the organic whole milk.  That way he's still getting the nutrients and vitamins from the formula but also getting use to the organic whole milk, which, come 12 months, he'll just be on that.

Once we gave him a sippy cup with not rancid breast milk but the whole milk + formula concoction, he was not as gung-ho as he originally was about the sippy cup the first time we gave it to him.  Maybe it's cause he remembers the nasty milk he tasted from it, or maybe it's a new taste altogether that he's not use to.  Either way, it definitely takes some force on our end to get him to drink all of it.  We've resorted to using whatever he didn't finish and mixing it in with oatmeal or cereal so he's still getting that milk.  And he does drink water out of his sippy cups too.  We have strategically placed water in cups around his play area and high chair so he can just grab them when he's thirsty.  Since he's not guzzling down his milk like he use to, we want to make sure he's drinking something and not getting dehydrated. 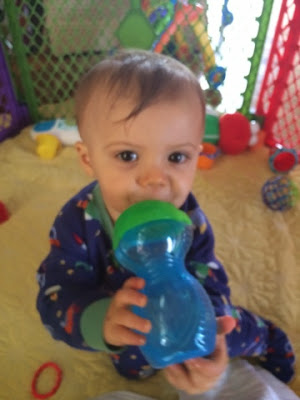 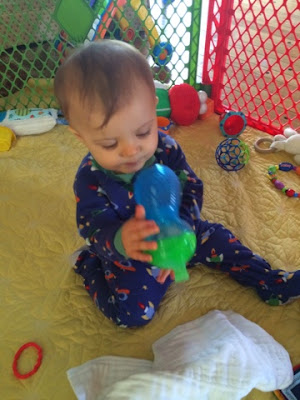 Today he's actually been better about drinking his milk from the sippy cup; I think he's taking some time to get use to this new taste (and probably get over the I'm sure traumatizing nasty milk experience--parents of the year goes to us again!).

Anyway, besides our little bad breast milk hiccup, I definitely say the sippy cup transition is going well.  We are STICKING WITH IT and committed, despite having a few hurdles.  And I think this is the most important thing you can do when transitioning to something new (like a sippy cup!) with your kiddo: you gotta stick with it.  It gets tough at times, but powering through will get you what you want in the end.
Email Post
Labels: bottle breast milk formula milk no more bottle Patrick sippy cup