I feel like I write this every month, but it really does feel like I was just writing Patrick's 10 month blog post, and now, just a month shy of his first birthday, I am writing his ELEVEN month blog post.  Seriously, how did 11 months go by so fast?  I mean, I feel like I blinked, and my little 10-pound baby is now this crawling-getting-into-everything-smiley-personality-beaming-little boy.  Kenny Chesney was absolutely right: Don't Blink. 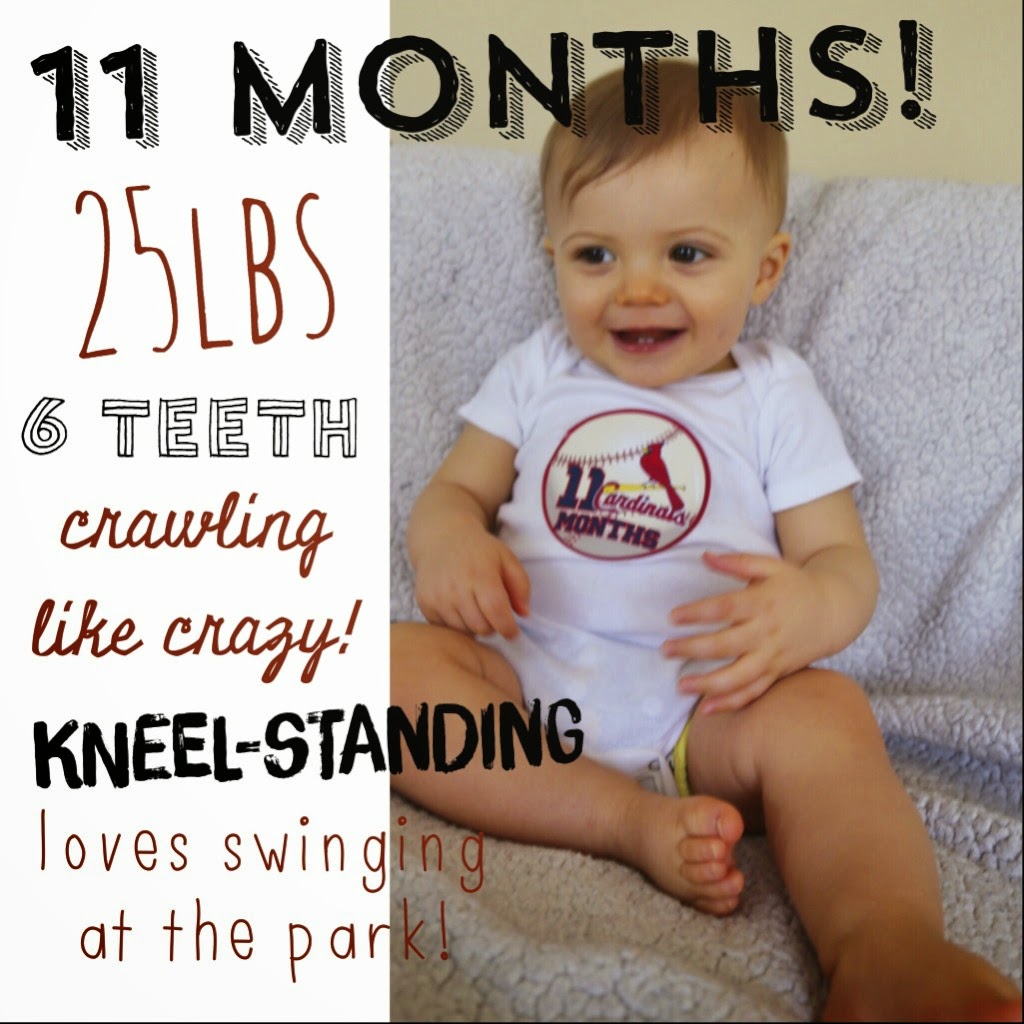 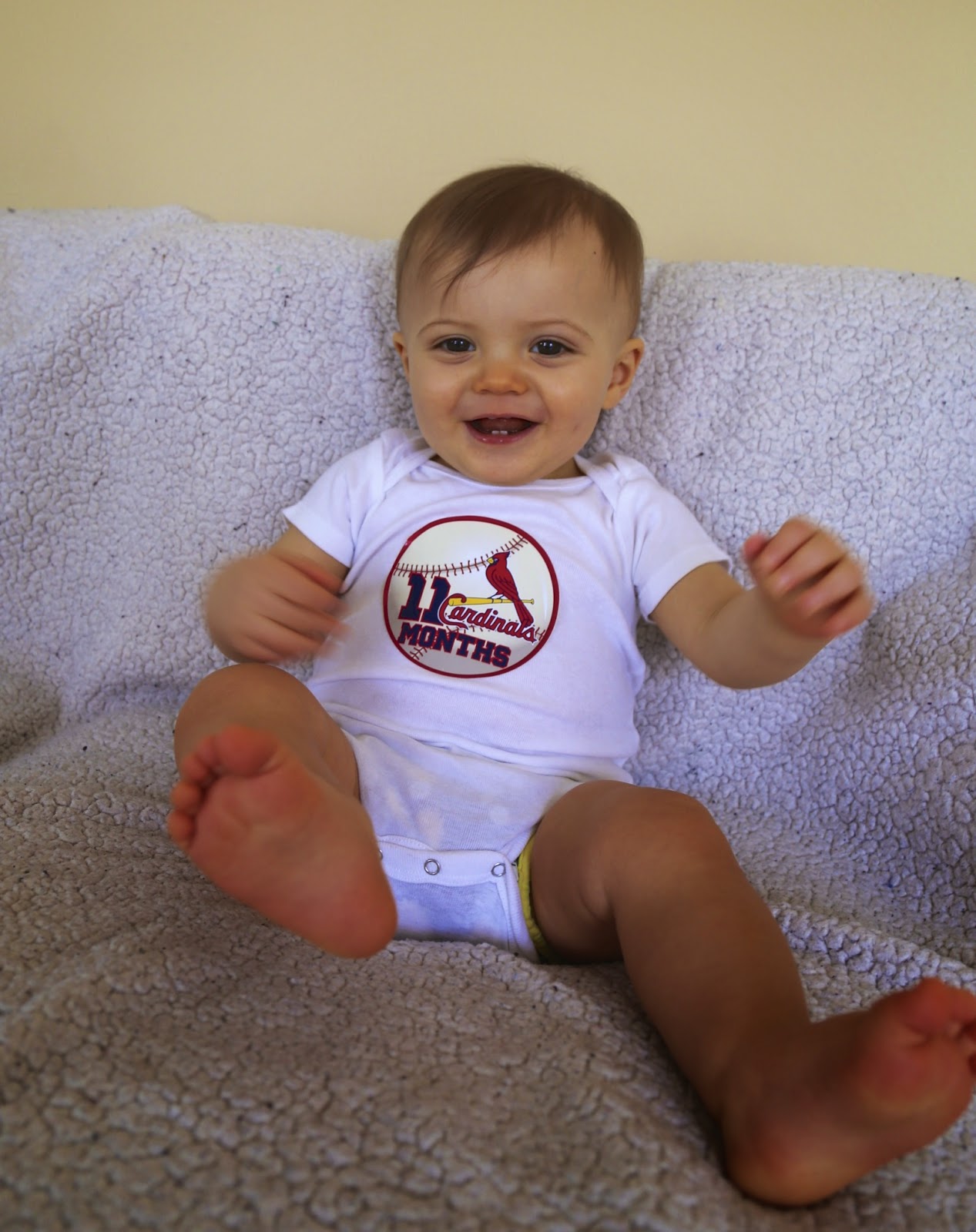 I said it the past couple months and I'll say it again: these monthly pictures are NOT getting easier to take.  They are actually getting infinitely harder.  This month, my lovely little 11-month old ripped (ahhh!) his sticker off and then drooled on it, so I was just shy of getting to reuse these awesome Cardinals monthly stickers for the next kid.  Dang.  Oh well.  Anyways, he is so squirmy and wanting to explore and get into everything, that to get him to sit still for the amount of time it takes me to snap a picture is asking a lot.  This month I tried to get him to focus by having Baby Einstein playing on his iPad behind me while I snapped.  Ehh, I guess it worked.  The perfectionist in me wants perfect pictures every single month, the realist sees that that won't ever happen, so I'm happy with how they turned out because it definitely represents his fiesty little personality. 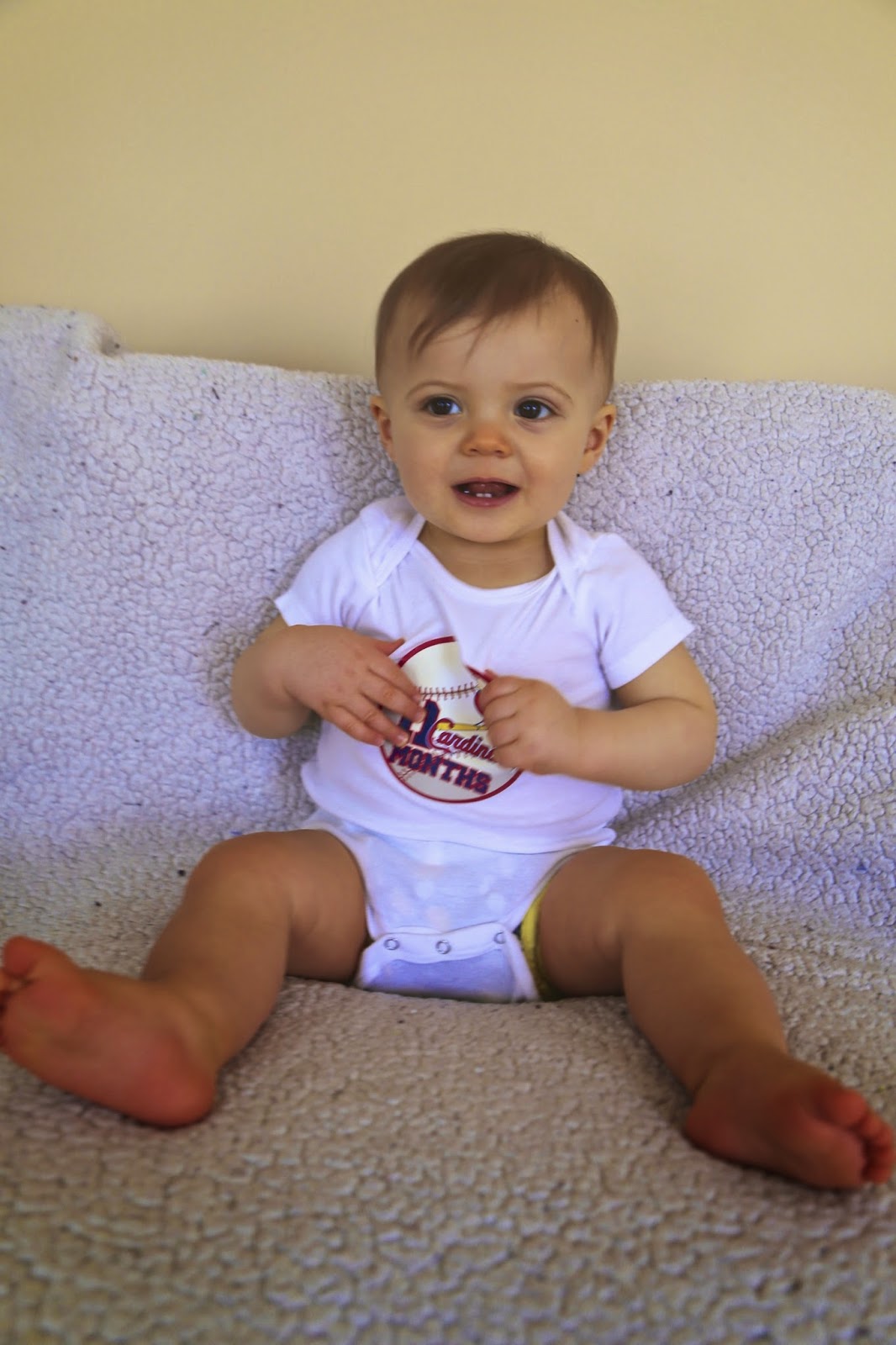 "Get this sticker offa me mom!"

Here are some noteworthy happenings of the past month of Patrick's life, because, everyone likes baby milestone updates, right?!

Well, that's about it for month eleven for Patrick.  I can't believe next month will be my last formal blog post like this!  I mean, I'll still blog about his milestones and what he's up to, but it definitely won't be monthly like this.  Ahhhh, time, you suck.  With that said, I'm going to savor every second I have with my not-yet-one-year-old this coming month.

Oh, and here's my obligatory collage photos for Patrick's 11 months of life.  Enjoy!  (side note: I've had to resort to creating custom collage layouts because there are just too many pictures now! :) 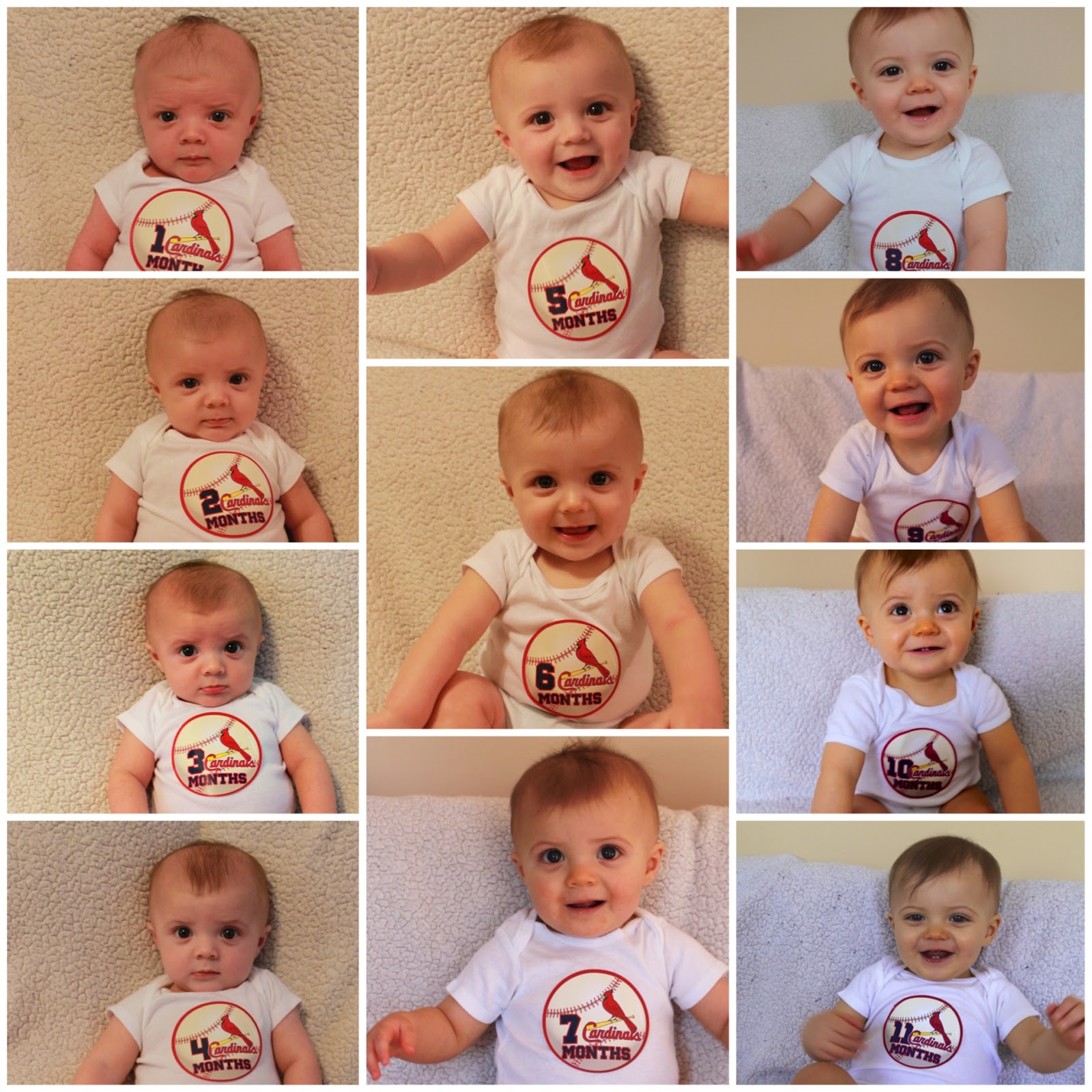 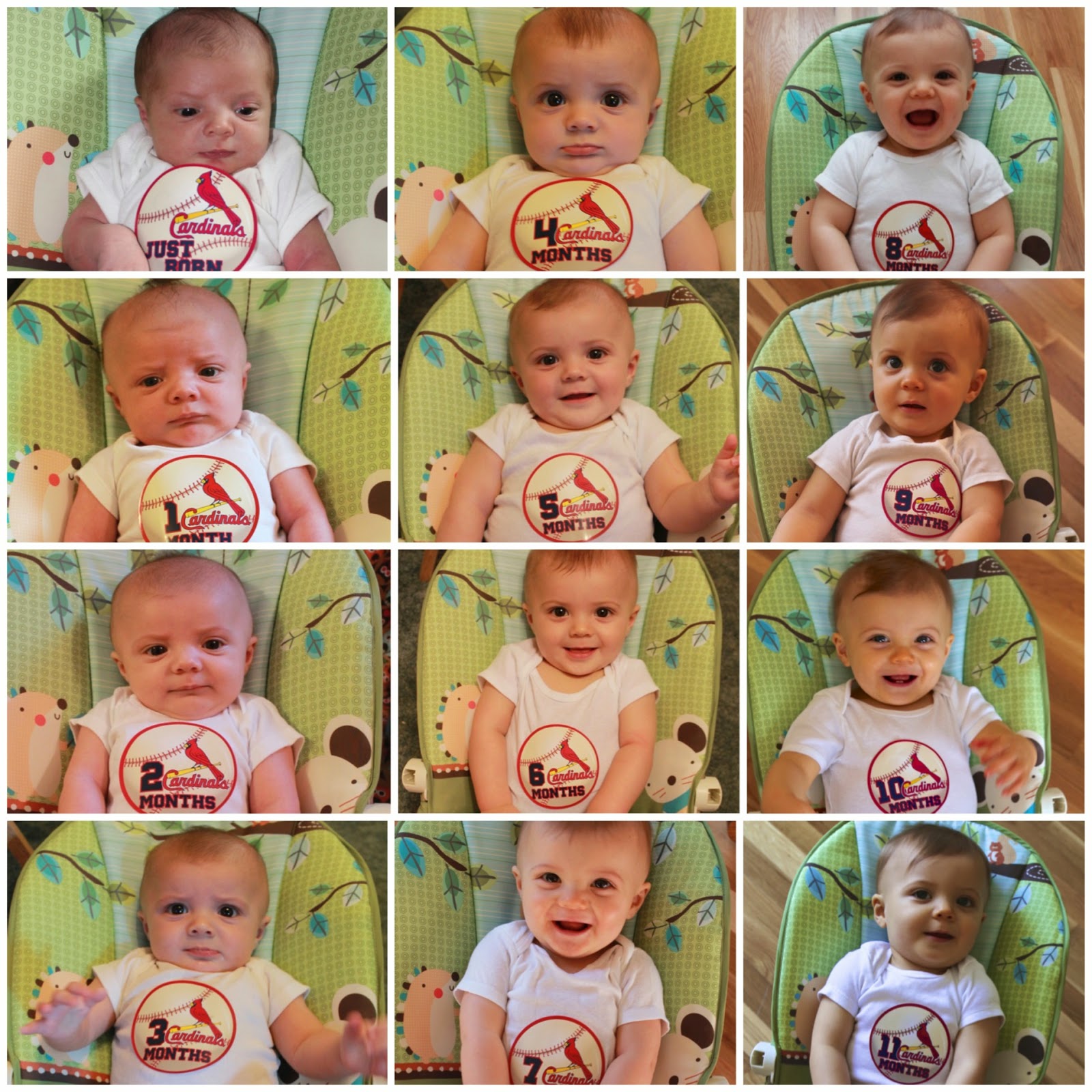