So we've been really busy not busy lately.  Catch that?!  We haven't really done anything, but I feel like we've been very busy with stuff around the house.  I get two under two will do that to ya, huh?!!

Anywho, I feel like I haven't blogged in a while (not really, it's been like 3 days, but still, feeling the urge to pound out something and attach a ton of pics of what we've been doing lately) so I thought I'd do a little 'lately' post as to what these Mooneys have been up to lately.

First off, Happy Earth Day!  I shared this pic on FB and IG earlier today--both my babies in cloth.  One of the reasons we use cloth is that it's better for the environment--so yay fluffy bums!  (Plus they're way cuter--and a lot harder for almost 2 year olds to yank off than disposables) 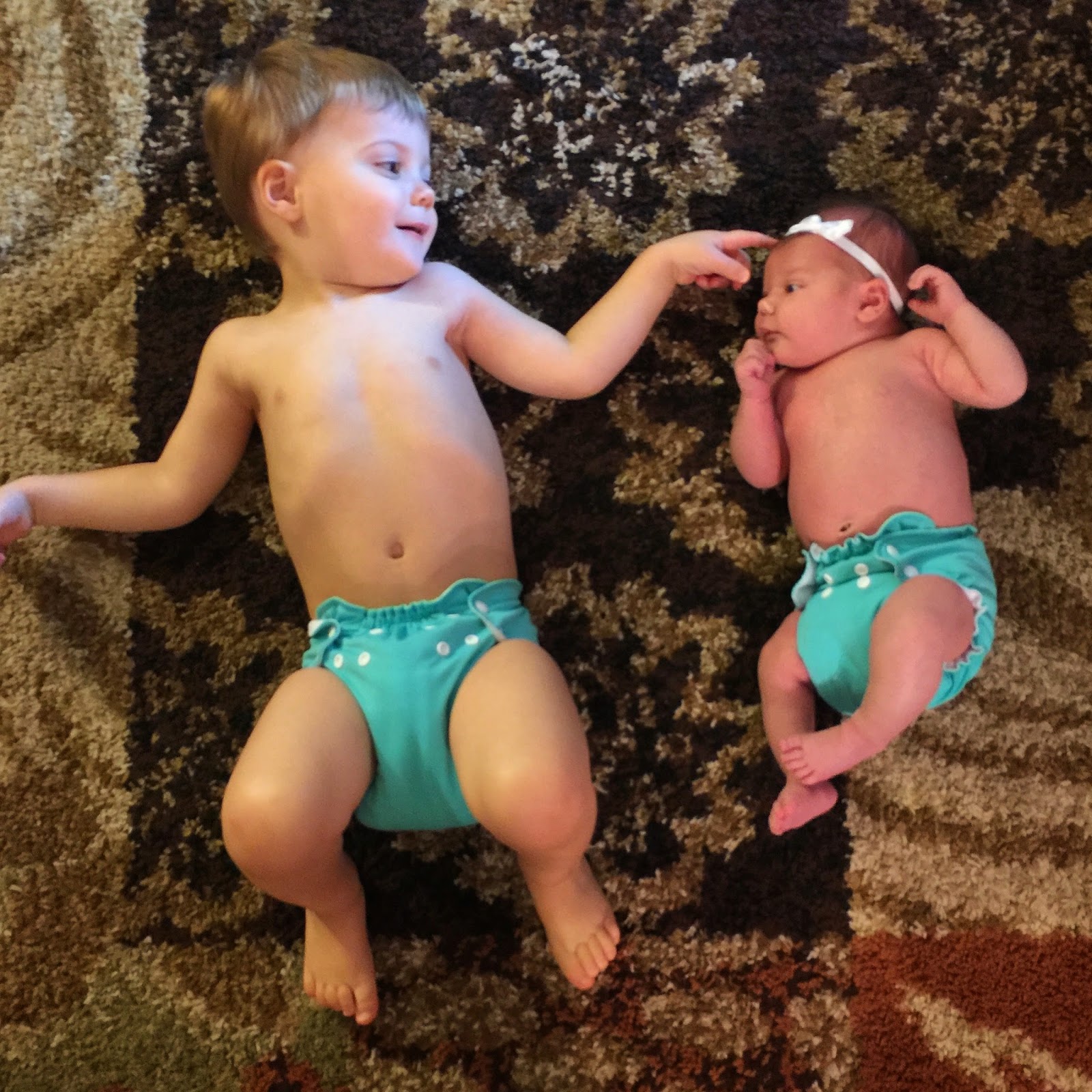 And while I'm on the subject of my two little minions, I want to note that Patrick is warming up more and more every day to Rosie.  It is so adorable--he actually likes touching (petting) her head and giving her hugs.  He's always running around saying, "Hi Ro Ro" or "Bye Ro Ro" and wanting to take her blanket off of her and put it back on.  It's so freaking adorable.  I sure hope this lovie dovie feelings from him continue and doesn't turn into hitting and pelting her with this...or at least until she's older and can fight back.  Wishful mama thinking, I know. 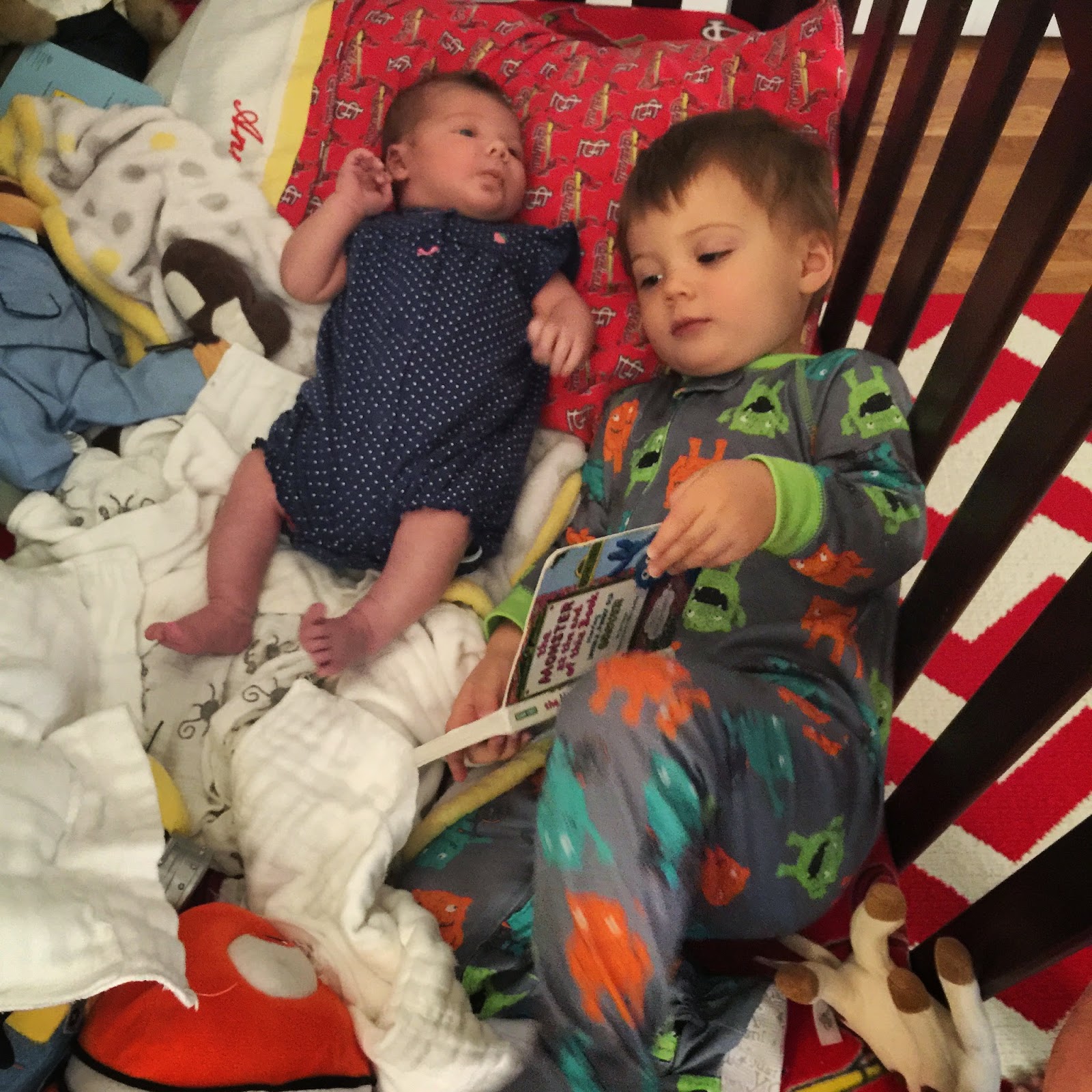 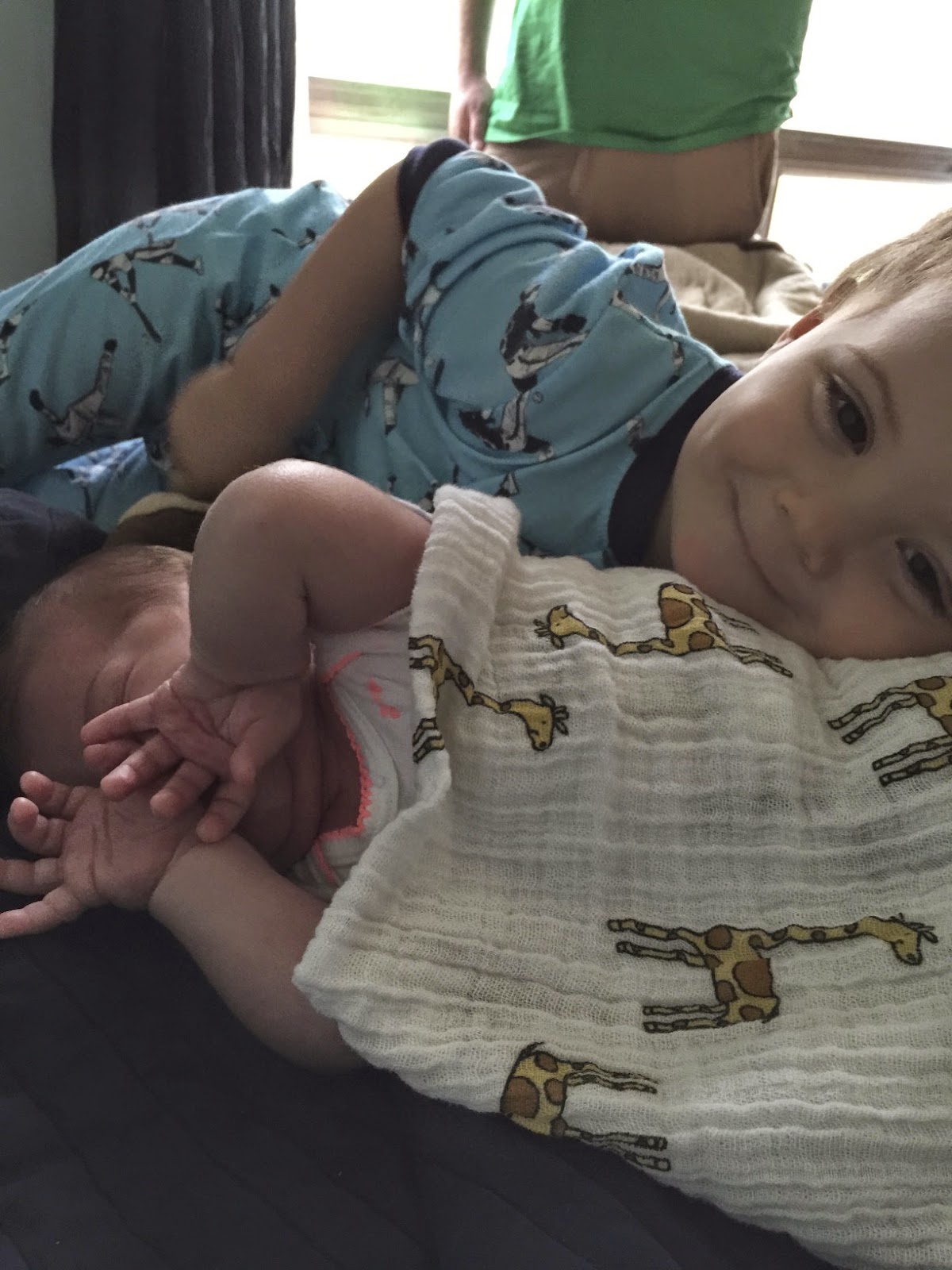 My friend Courtney sent me this pin several months back and said I needed to do it when baby #2 arrived.  Well, yesterday proved to be the perfect occasion for it, seeing as Mike got home late from work (boo) but did manage to stop at my favorite donut joint in the city and pick up some donuts!  So I seized the opportunity before the boys woke up to recreate that pin with little miss Rosie.  I am so happy and smitten with how these turned out!  If Mike had a desk at work I'd totally print and frame these for him...but alas, he doesn't, so iPhone wallpaper it is for him instead. 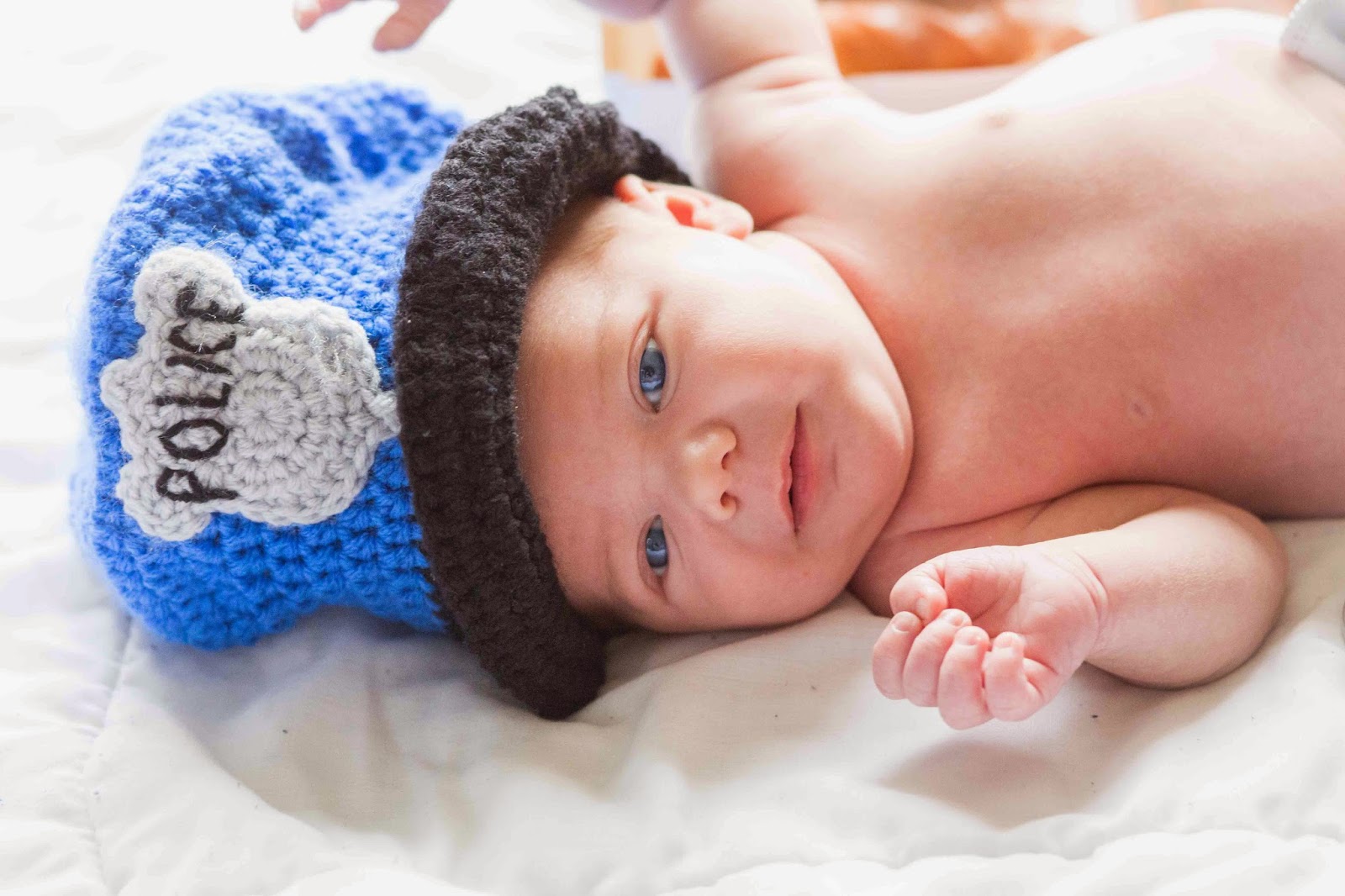 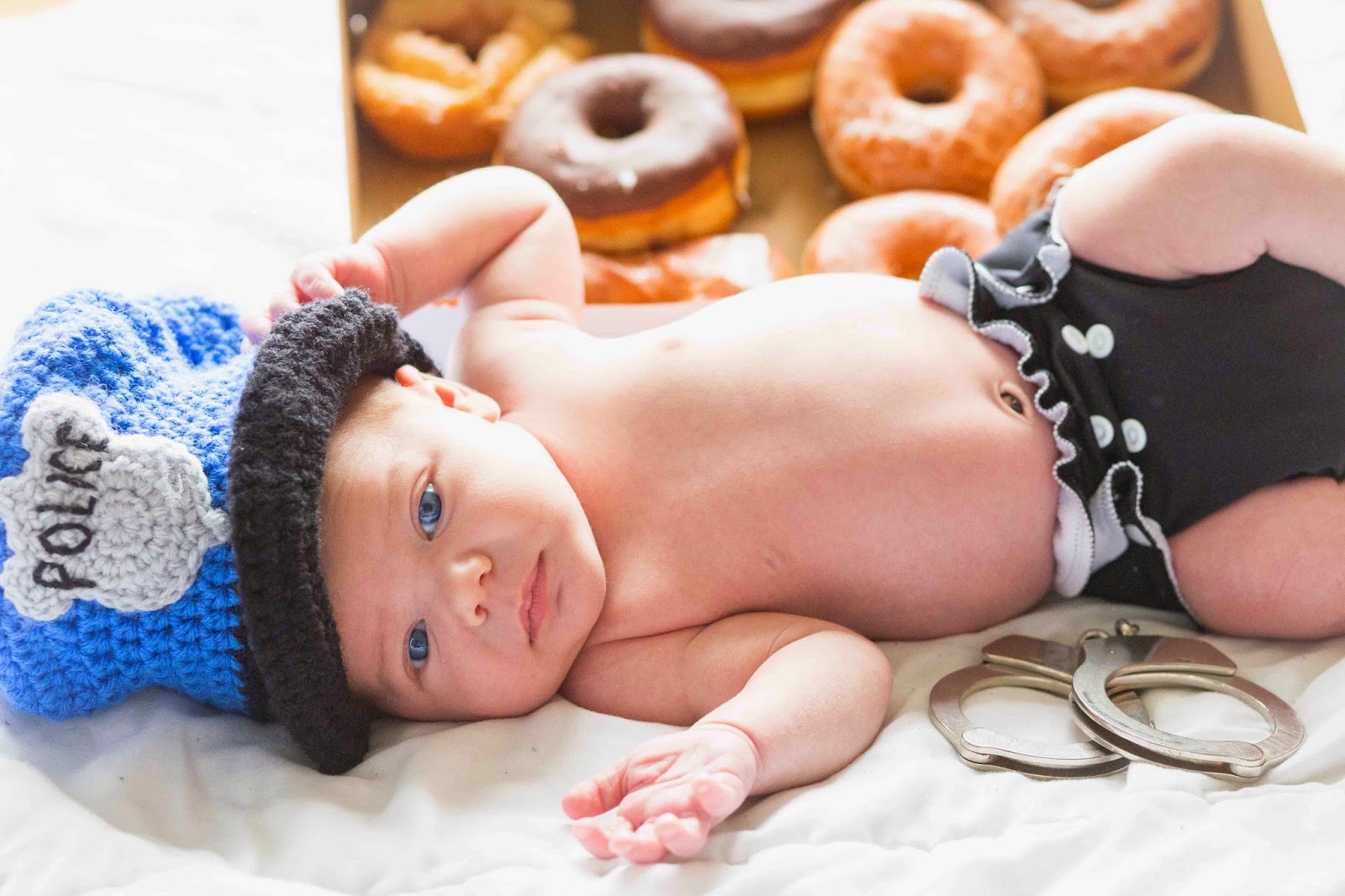 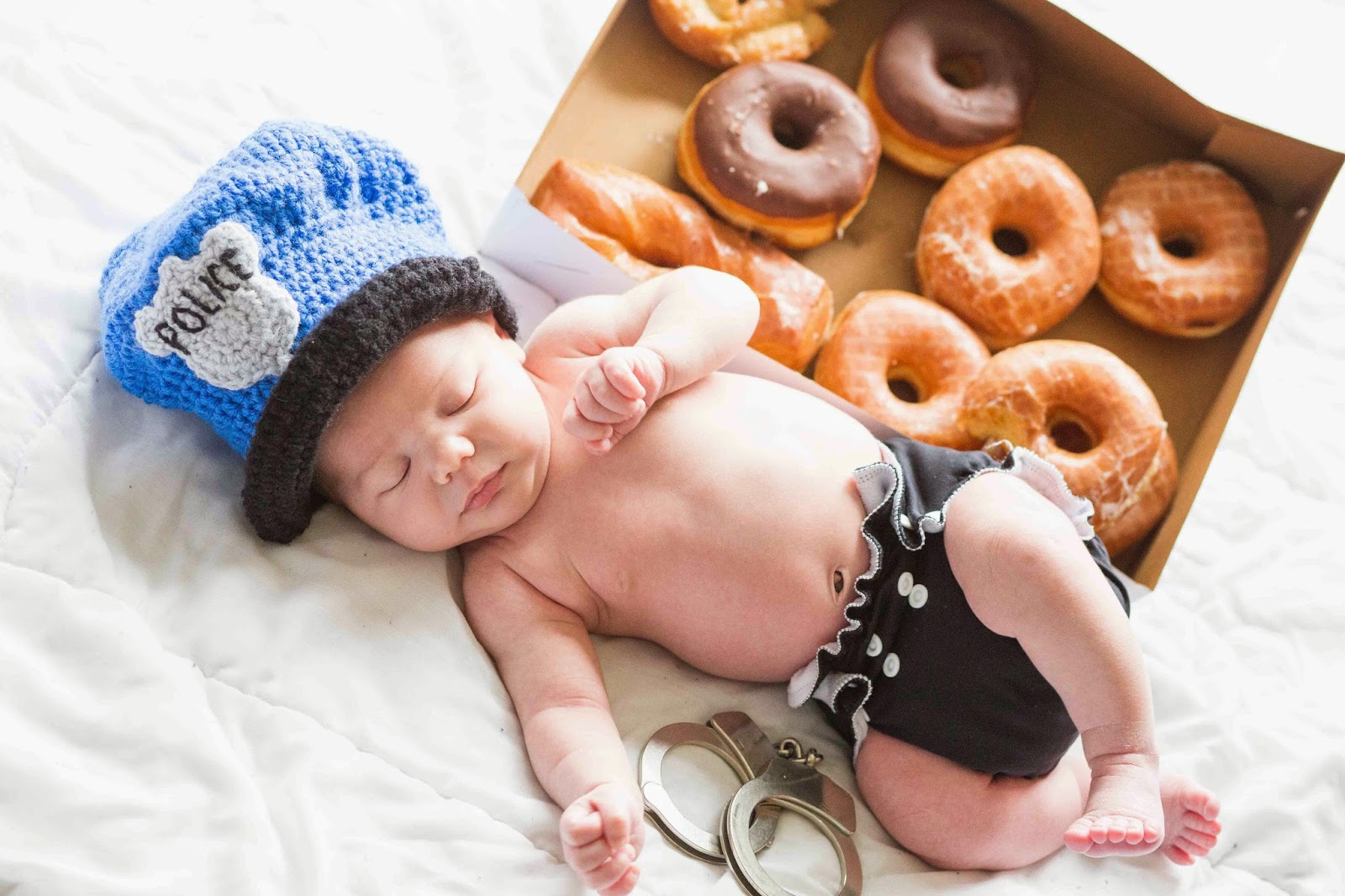 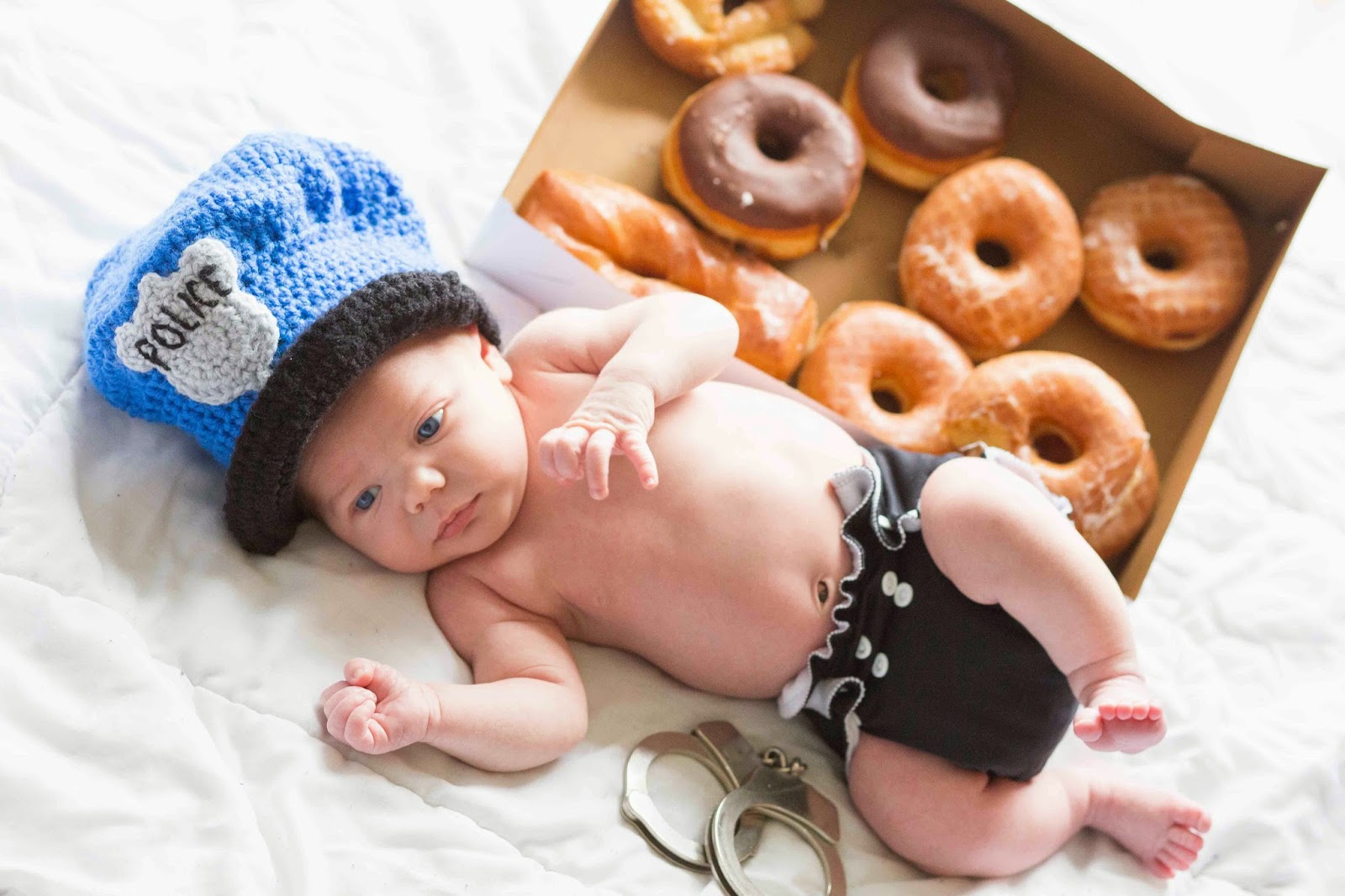 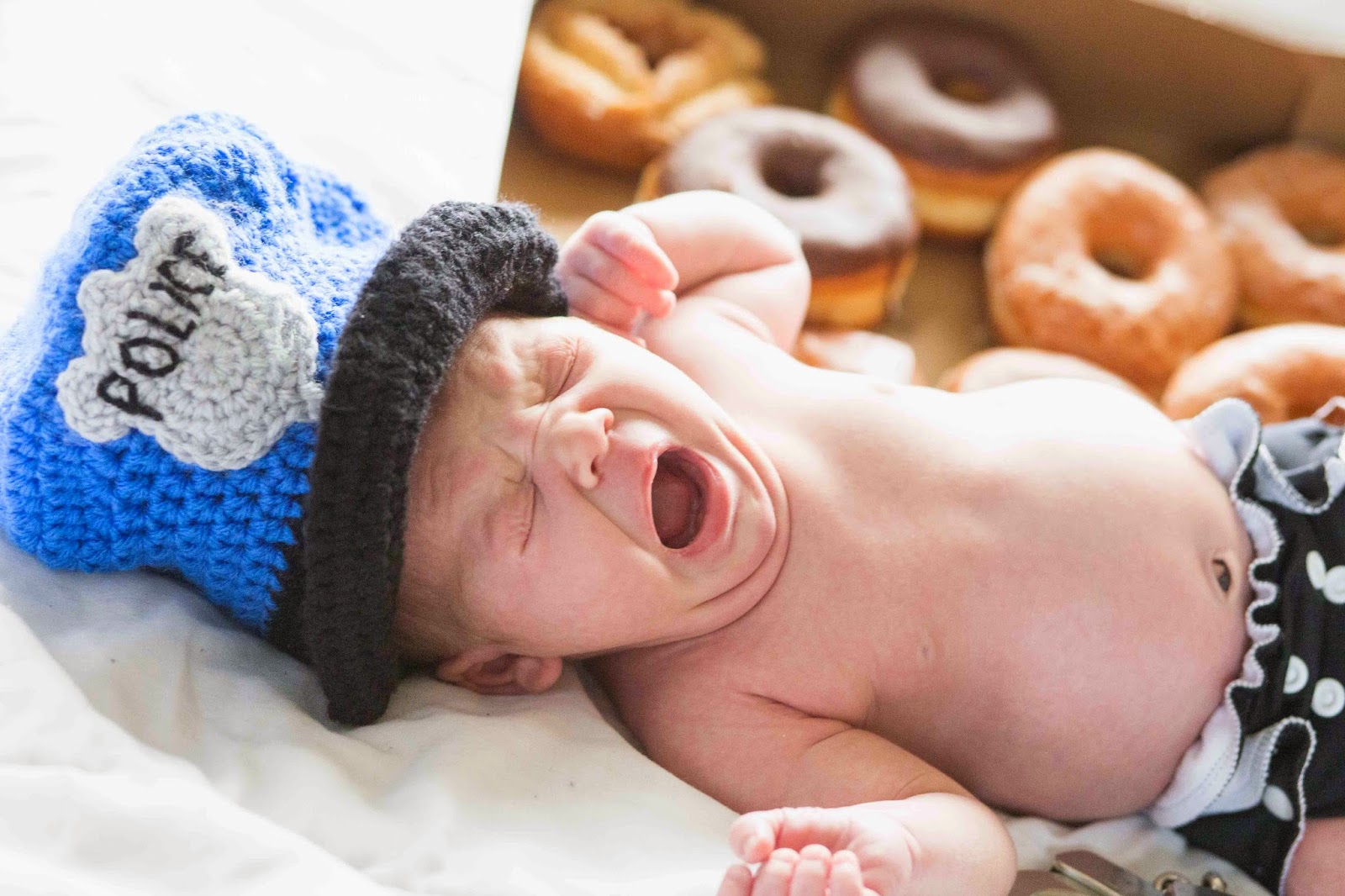 Yeah. LOVE those.  Can we also talk about how big Rosie is getting?!!  I took her last Thursday for her 10 day weight check and she was 9lbs 1oz.  Girl likes her some mama's milk!  Well, after her bath on Monday I decided to weigh her on our baby scale (which also doubles nicely for weighing packages down to the ounce as well) since she was nakie just to see how much she was up to.  Holy Toledo, she gained AN ENTIRE POUND since Thursday!  She was up to 10lbs 1oz in just 4 days!  HOLY COW!  No wonder all of her newborn outfits don't fit anymore and all of her 3 month ones (still a wittle big) are fitting.  I'm really curious how big she'll be at her 1 month checkup (taking her and Patrick for his 2 year checkup the same day... hashtag ambitious Alex) -- Patrick was 12lbs 13oz at his 1 month I believe, so wondering if she'll be up there as well!  I think I make cream, not milk.  Ha! 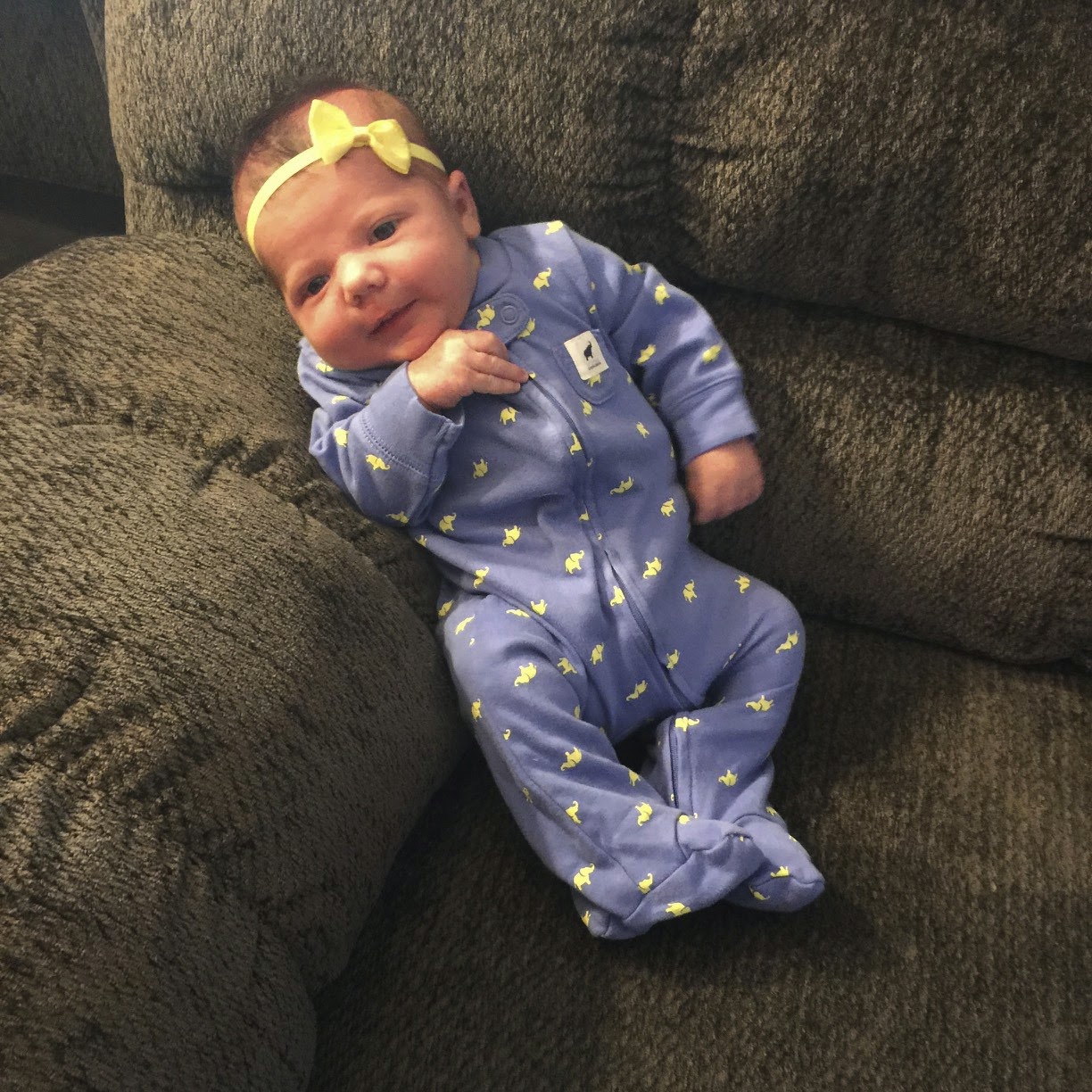 And for those wondering, my dairy cow status is back.  I've been following my same "extreme pumping" routine I blogged about last year and it seems to be working again :)  Rosie gets maybe one bottle of pumped milk a day, but primarily just nurses from me when she's hungry.  So all of this thus far has been pumped after I've fed her and still feel full.  I'm happy and thankful again that my milk supply doesn't seem to be a problem with #2!  Mike keeps telling me we need an exit plan for this milk already, since it's gonna stockpile up really fast.  So, figuring out what we're gonna do with it...probably donate some, save some, maybe even give Patrick some?!  Who knows.  Stay tuned. 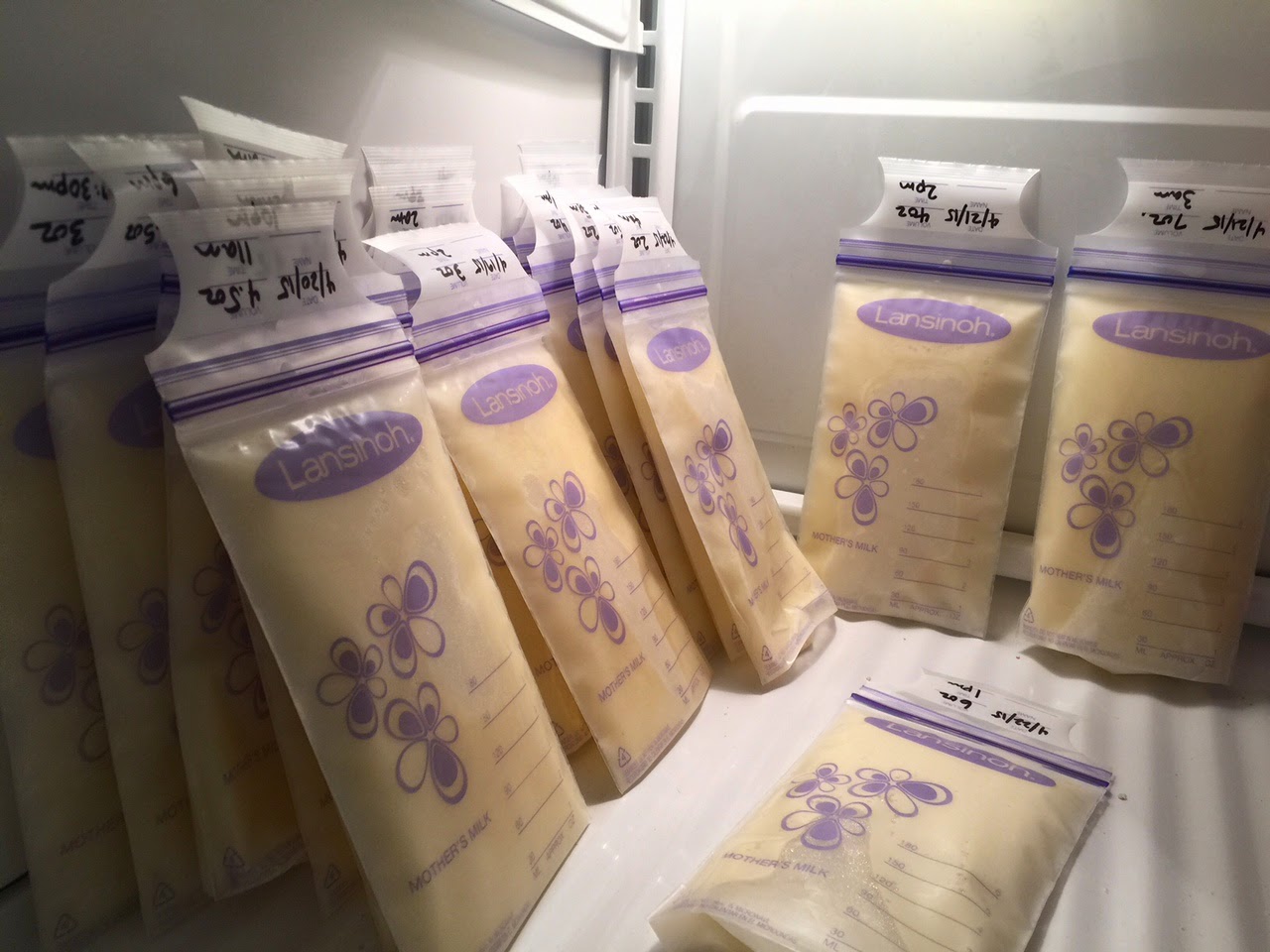 Scooter has also really taken to his new sister (ha, like he had a choice!) and embraced her love for laying around and sleeping.  Laziness runs strong in the Mooney household. 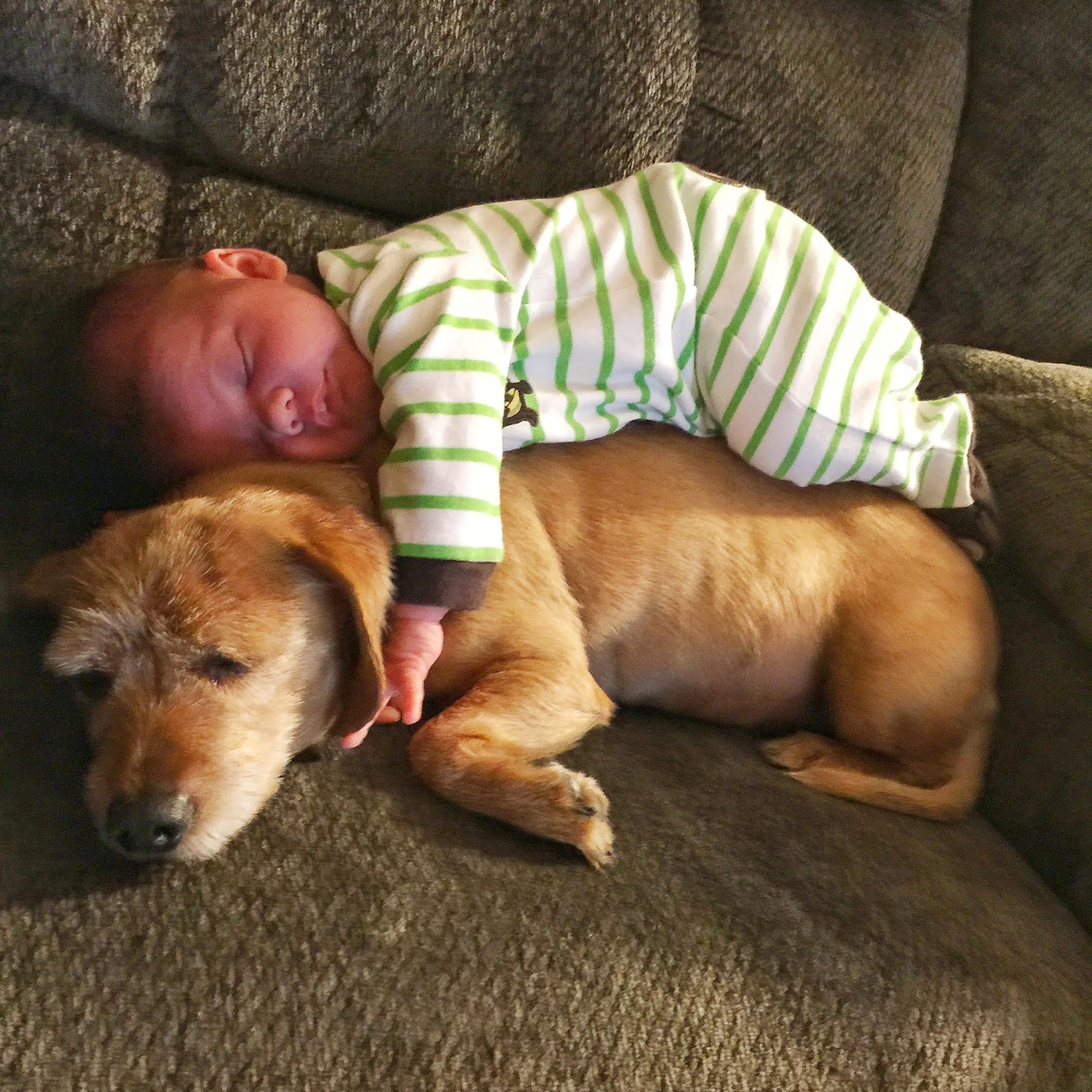 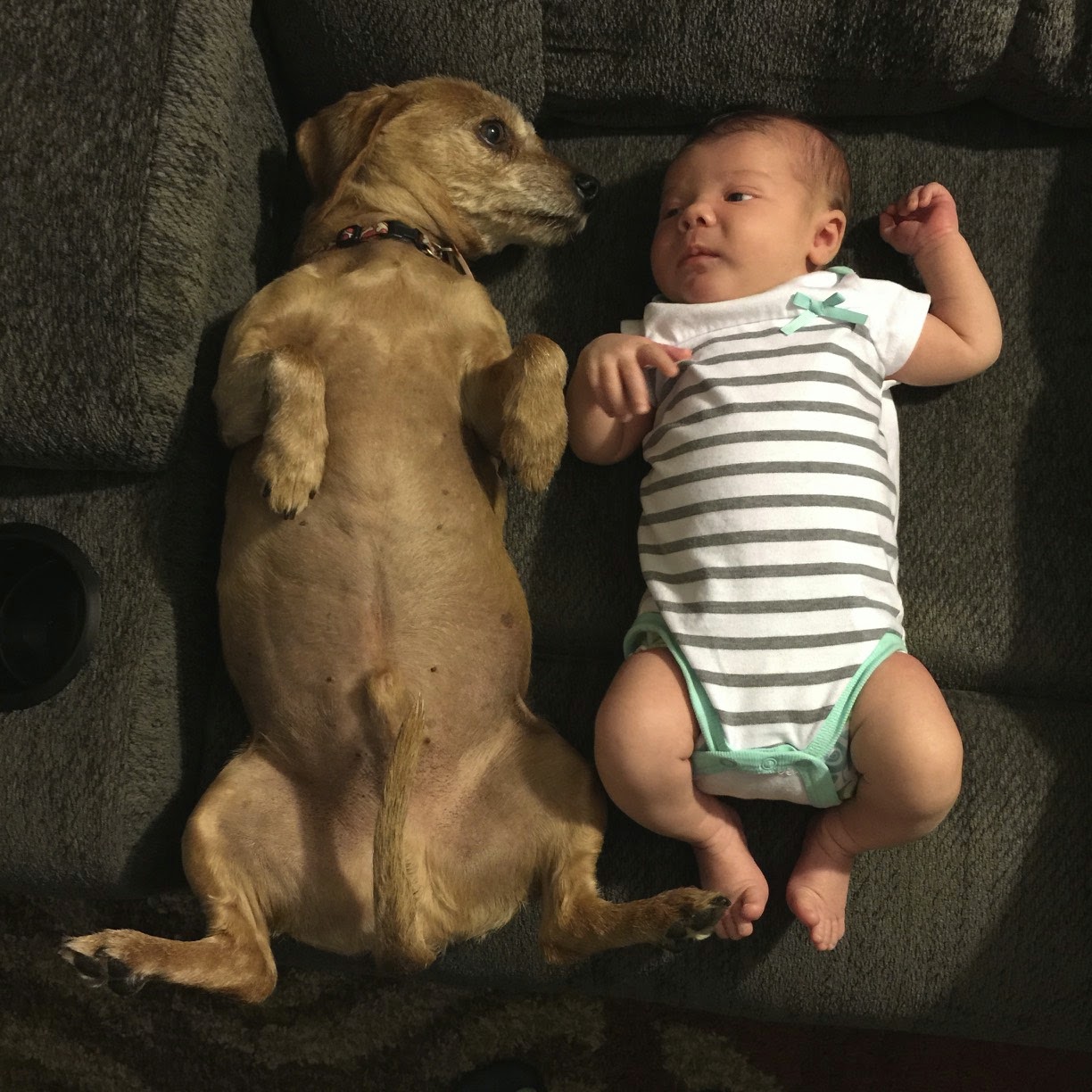 And I'll close this post with some Patrick happenings.  First off, he's going to be TWO in 10 days.  I.cannot.believe.it.  Seriously.  Fastest 2 years EVER.  I'm pretty sure life now will only be described as going fast...as I can't believe it's been 2.5 weeks since Rosie was born.  Wow.  Anyways, we've started planning Patrick's 2nd birthday party (keeping it small, just with friends and family) -- it's going to be Cardinals themed!  Stay tuned for a'many posts afterwards for all about his birthday shenanigans.  Seriously though, how old does he look in these pics?!!  Like an almost two year old.  I could cry.  But I do love seeing his little personality develop more and more each day as he learns new things and new words.  My mama heart could melt. 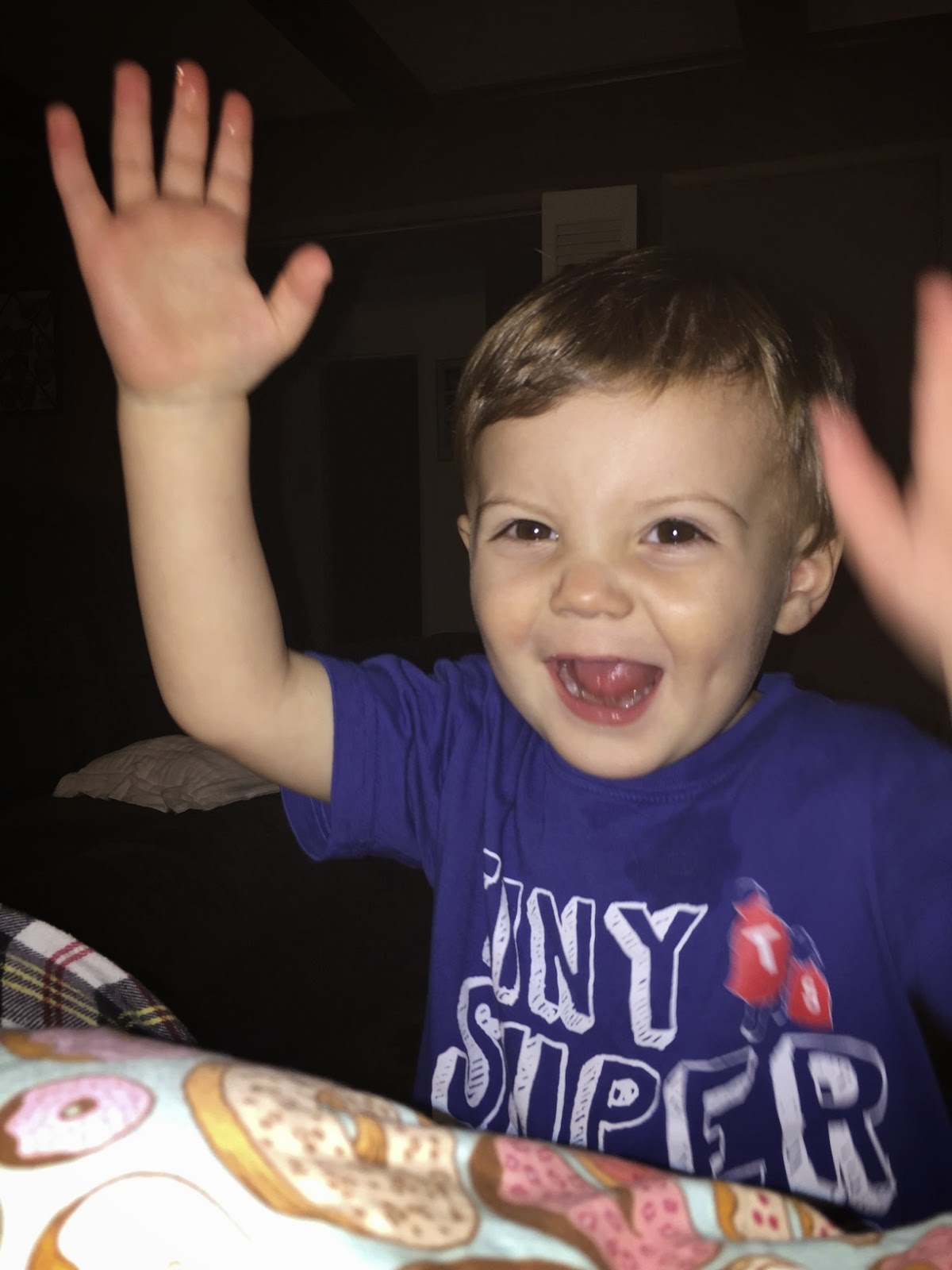 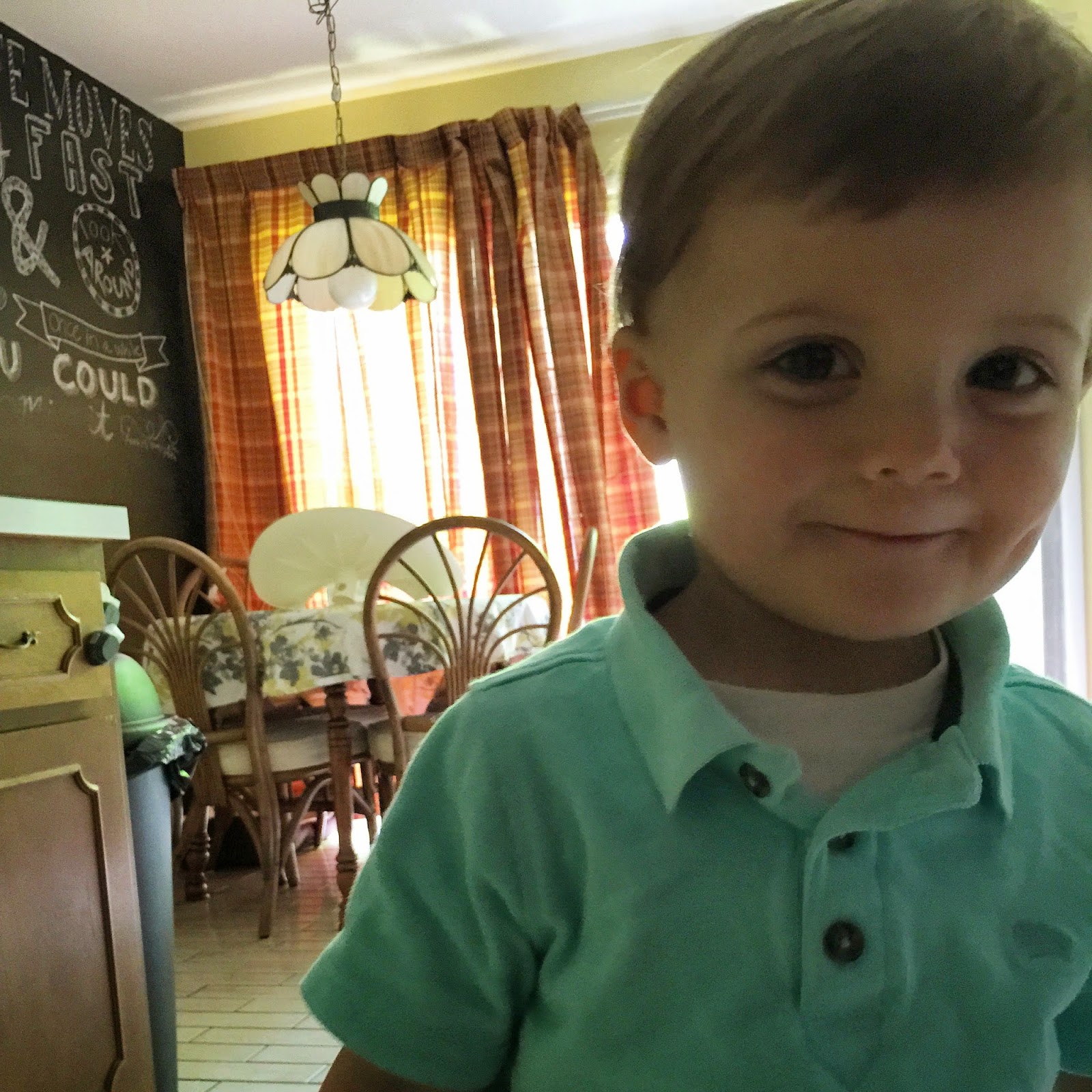 Lastly, I'll leave you with this hammy little pic of Patrick having lunch at the Pond with his Goose.  His face KILLS me.  I'm so glad I have such an awesome hubby who doesn't mind taking him up to see his great-grandma a'many times during the week, even when I cannot go.  How'd I get so lucky?! 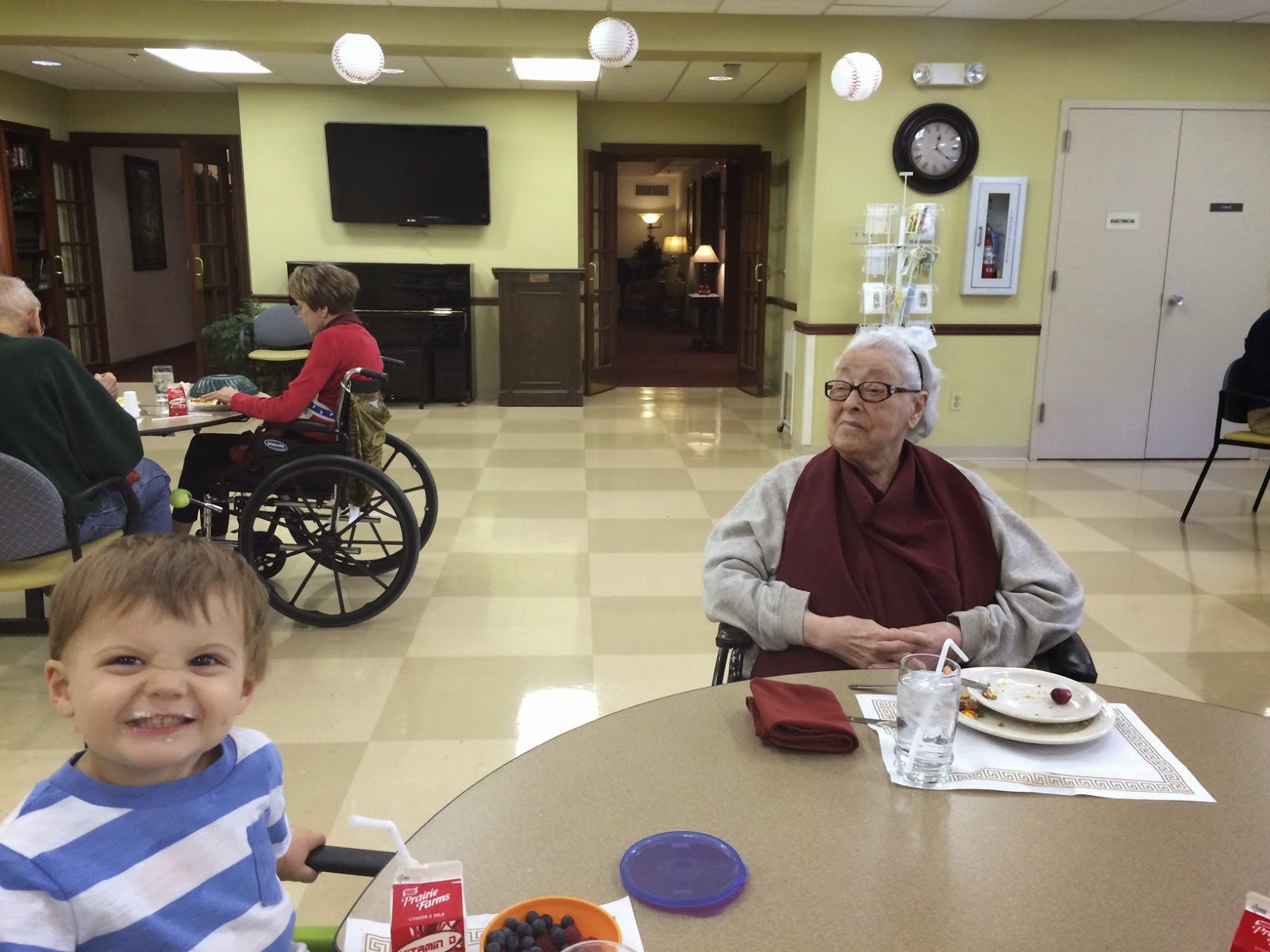