I Caught the Crazy Bug.

Yes I did.  And I'm not sure what led to me catching this craziness, but today I caught it full force: I took both kids to the Zoo solo...for 3.5 hours.  Never would I ever have thought I'd be doing this, and doing it just 6 weeks after Rosie was born.  Heck, wasn't it just the past week where I was excited about taking both kids to the store?!!  Today was a whole 'nother level of crazy: the oh-so-crowded STL Zoo.

Whatever came over me happened about 9am this morning when I was talking to my parents on the phone about what we were going to do today.  We didn't have any set plans, and Patrick was screaming "choo chooooooo!" in the background and I all of a sudden said, "I think we're gonna go to the Zoo."  And that was it: I got the kiddos stuff together, and twenty minutes later we were out the door.

Now, stupid me thought, "It's 50 degrees out and the last week of school.  The Zoo won't be crowded cause it's chilly and who goes to the Zoo their last day school?!"  Stupid stupid stupid me.  It was PACKED.  Patrick kept saying the whole way there, "Ride choo choo?" and so I couldn't just bail on our trip, cause he really wanted to ride on the train!

Luckily we have a membership, so we got to park close in the lot, and got free train tickets.  That was the firs thing we did when we got in: headed to the train!

I had Rosie strapped to my chest in my beloved Tula, and I pushed Patrick in the umbrella stroller.  Then I had a small backpack on full of snacks, diapers, wet wipes, drinks, my nursing cover, and anything else I thought we'd possibly need.  Prepared is my middle name.

We had to wait about 10 minutes for the train, but Patrick was oh-so-good.  I think the anticipation of seeing the train was keeping him occupied :)  Anyways, the train came and Patrick about had a fit--he was so excited!  He couldn't race fast enough to get a seat!

Once we got settled, he even let me take a selfie of us 3 crazies on the train--which I then posted to Facebook and Instagram, alerting people that I was indeed crazy, taking both kids to the Zoo by myself. 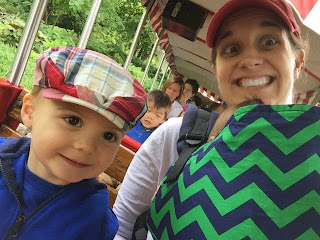 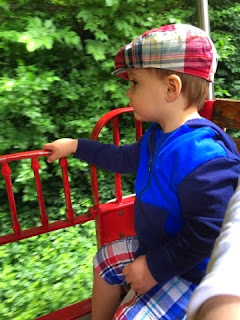 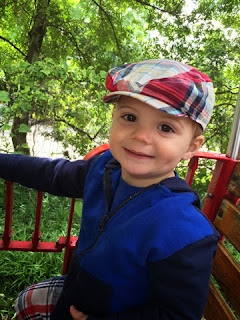 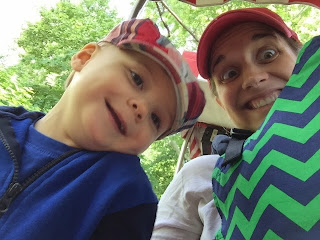 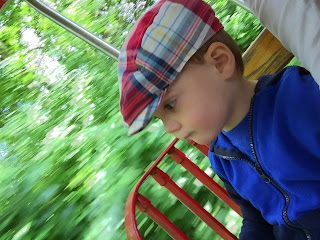 Patrick had an absolute blast on the train.  He was in heaven.  He loved seeing all of the animals (and water) we passed, and pointing and waving to them.  Trains are totally his love language right now, and I'm okay with it (as long as it's not Thomas.  I hate Thomas.).  He loved loved loved the train. 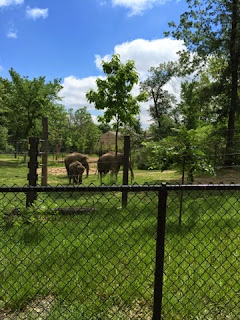 When it was time to get off (our tickets had run out!), he did throw a minor fit, but I was somehow able to carry him and Rosie (in my carrier) off the train and strap him into the stroller unharmed.  Alex - 1, Patrick - 0.

We then walked around for a bit, dodging the zillion school groups that were there.  Then, thinking that Roise was probably going to wake up from her Tula slumbers soon and be hungry (and I was getting hungry!), we headed to the Lakeside Cafe (indoor eating! clean! win win!) for lunch.

Patrick and I split chicken fingers and fries (and a crapload of ketchup for him), and he also had applesauce and fruit snacks I brought him as well. 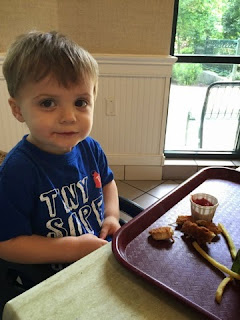 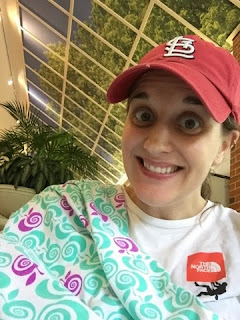 Rosie then got hungry, so I whipped out my favorite nursing scarf and let Rosie eat.  Patrick was a gem for the 20 minutes I nursed her--there was prime people watching in there so I'm sure he was loving that (as was I).

After we got cleaned up from lunch we walked around for a bit more, hitting up the gorillas and monkeys and birds.  Patrick loved seeing them and pointing and "ooooooh"-ing at them.  So cute. 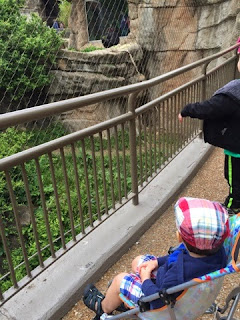 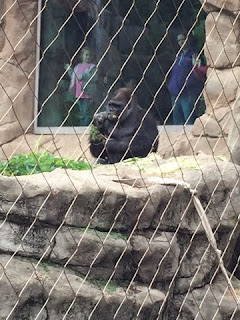 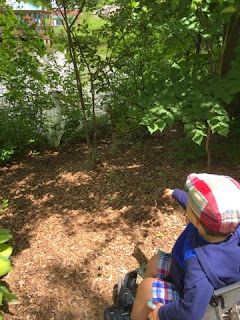 One thing I did not let him do was run loose from the stroller (as I've done before on our Zoo trips).  No way Jose, he was staying confined--it was much easier for me to handle two kids when I was carrying one and pushing one.  So he got to take in the animals from his chair.

After a good 3+ hours at the Zoo, I called it quits (cause I was getting tired! and everyone needed diapers changed and I didn't want to mess with that at the Zoo, rather do it at home), so we headed to the car to head home. 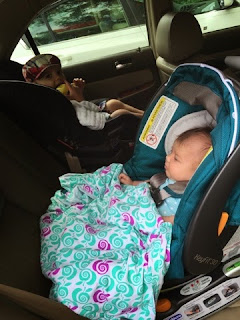 Shockingly both of them were wide awake for the entire car trip (what?!?!!) and took them both a hot minute to fall asleep for afternoon naps today (again, what?!!!).  I guess this solo trip to the Zoo with my two cucumbers wore me out more than them.  Ha.  Typical.

Anyways, it really was a blast with both kiddos BY MYSELF this morning and I'd totally do it again.  Today gave me the confidence that I'm getting the hang of this two kid thing and handling them both in public pretty darn well.  More adventures lie ahead for the three of us this summer while Mike is at work...so just you stay tuned for that :)
Email Post
Labels: family family fun kids Patrick Rosie St. Louis Zoo trip Zoo