Patrick, like a lot of other kiddos his age, is absolutely crazily OBSESSED with Paw Patrol.  Seriously.  It's his new addiction, and I'm completely okay with it cause, it's not Thomas.  Thank God.

Anyways, for those who don't know what Paw Patrol is, basically it's a Nickelodeon show about dogs that are on a rescue team and help other animals in distress, under the leadership of their human Ryder.  Exciting, right?!  This show is like crack to kids and it doesn't surprise me one bit Patrick has fallen for it hardddddd.  Heck, the majority of his Christmas presents were Paw Patrol themed! 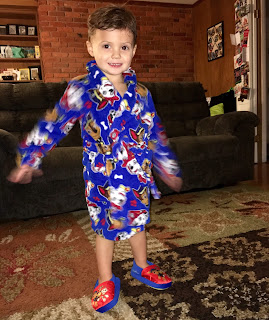 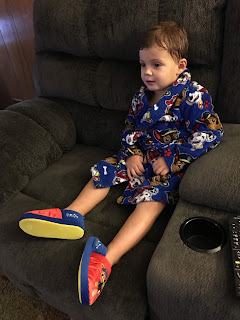 His jam before bed is the exact same every.single.night.  He's gotta have his bath, then he watches a 30 minute episode of Paw Patrol wearing his Paw Patrol robe and slippers sitting on the couch.  Up until yesterday, this is how he has looked for the past several weeks (with the robe and slippers coming from Santa recently).  HOWEVER, he added to his Paw Patrol ensemble yesterday after he got a very special first time ever trip to Build a Bear with his NeeNee and Aunt KiKi to build a Chase (the police dog) of his own!  Goose couldn't go, but was going to get that for him as part of his Christmas gift.

All morning long yesterday I told him he was going on a secret mission with KiKi and NeeNee.  He was so excited.  I decided to tag along with them to snap pics (of course!) and see how much he freaked out when he was there. 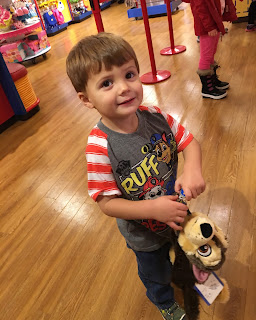 I think he was sooooo overwhelmed and almost in shock with the store that his excitement was a bit contained.  Nonetheless, he was loving every minute of getting to pick out his Chase dog, load up the sounds effects, watch the gal stuff it, bathe Chase, pick out some clothes, make a birth certificate, and take him home! 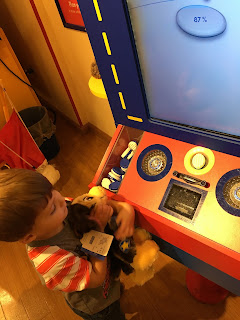 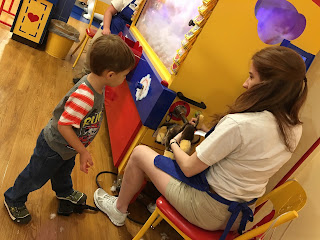 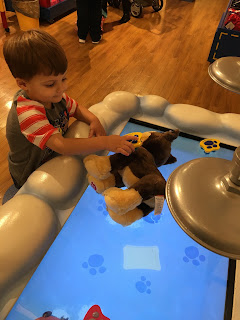 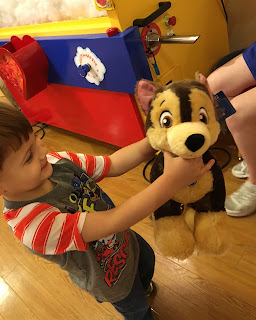 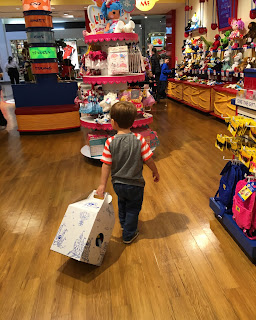 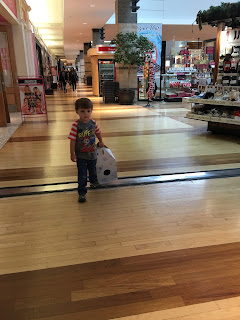 He was just in heaven.  It was the cutest thing watching him get so excited and light up to have his new Chase dog!  And he carried the house box the entire way through the mall and to the car!

Since yesterday he hasn't let Chase out of his sight--taking him everywhere with him and showing him  to everyone who comes over.  I'm so glad he has found something he really likes ANDDDDD that it doesn't annoy the ever-loving daylights out of me like, uh-hm, Thomas does.  I'm sure I have some other friends out there too with little ones who are just as Paw Patrol obsessed as Patrick is, so I'm sure they sympathize with me in this post :)  If his obsession is still holding strong come May, maybe he'll get to go back and make a Marshall dog too!  Stay tuned for that!  Ha!
Email Post
Labels: Build a Bear fun Patrick Paw Patrol stuffed animal toy