Last year on July 30th in a very lengthy "lately" post I shared a pic of my boys all dressed up in their police uniforms on the couch--something I had done exactly a year before with them as well.  This has now become a July 30th tradition 'round these parts, cause this happened this morning after everyone got up: 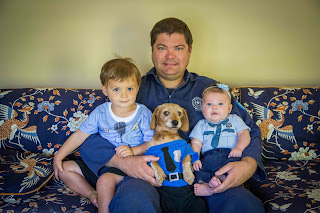 And, since you know I'm a sucker for comparison pics, here's the last 2 years as well all thrown together in a giant comparison strip. 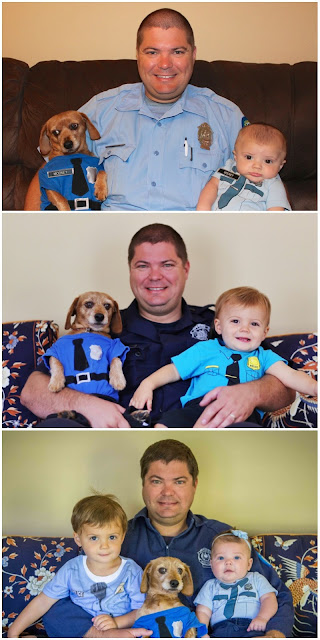 Someone commented on Facebook that Mike's hair has gotten longer each year--it has!  He actually is in need of a good head shave soon so he can get back to his 2013 look in the top pic.  Less poofy he says.

Anyways, I took a few more pics of the kiddos and Scoots together, and couldn't help but notice how funny these pics of Scooter and 3ish month old Patrick and Rosie are together.  Totally makes me giggle...a lot. 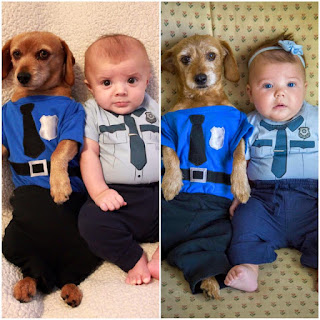 And I got confident and tried to get a pic of all 3 of the kiddos in their police garb, and #nolooknocare was in full force from 2/3 minions, and Rosie was killer with her RB face.  Nice. Nice. 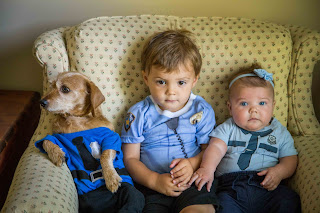 After our little July 30th photo sesh, we headed off to the pool for Patrick's last swim lesson of the summer.  He was in the shrimp class again this year with his buddy Emma and they both had a blast once again--I think they enjoyed not listening to us and doing their own thing more than anything.  Ha!  Oh 2 year olds. 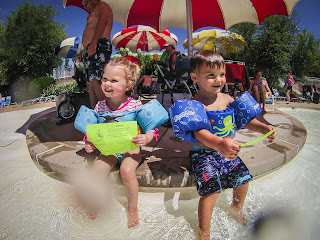 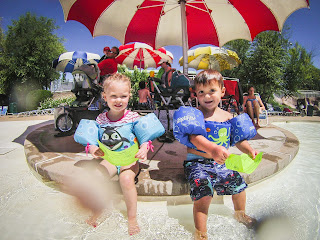 We were able to get 2 semi-good pics of them holding their swim certificates that said they both could move onto the seahorse group next summer (big step!  That'd mean they'd be in swim class without parents there!  OH BOY!).

I love their little faces and how proud they were holding their certificates! --that both of them dropped into the water and got soaking wet.  Oops.

After swim class we'd always go hit up the last 30 minutes of Tot Time before we left.  This always has proved very well for longer nap times and more exhausted kiddos--shoot, even Rosie sleeps better after she's been outside basking in the sun (ha! Not really--parked in the shade with her car seat fan running is more like it!).  Anyways, today was super fun because it was the last swim class--and my last day of freedom/summer because I go back to work tomorrow (early! I know!  So.much.to.do!).

I got out my GoPro and snapped a few pics--Lizzy met us at the pool with Mike's mom and Patrick had a fun time playing with her and Emma!  Surrounded by ladies he is! 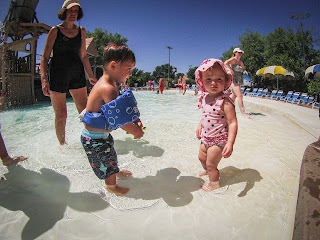 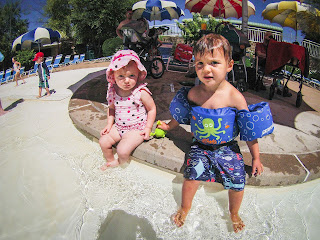 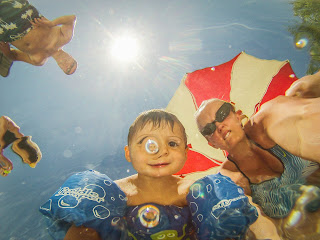 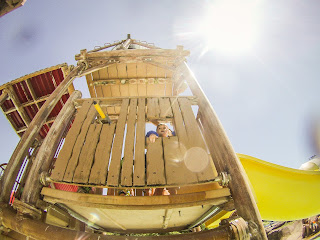 All in all it was a super fun morning--a great one with some family time and pics and a lot of swimming and fun--to wrap up my summer vacation.  Even though school doesn't officially start for 2.5 more weeks, and I still have lots of pool time planned for after work and weekends, this was my last day of doing tot time and morning weekday fun stuff with my fam bam, and I'm definitely going to miss it.