Adventures in Tummy Troubles, and Other Fine Things

I posted early last week about how we had one doozy of a sick start: Rosie had a fever and Patrick had suspected food poisoning...well, a little uppity-to-date about that. 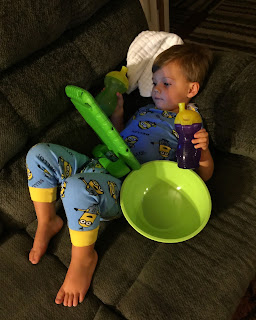 So, I'm thinking both kids now had/have a virus--maybe the same one?? And it just impacted Rosie with a fever and Patrick with puking and diarrhea.  Well, Rosie bounced back quickly and by Wednesday was back at her 98.6 degree self.  Patrick had his nice little food poisoning look-alike episode on Monday, but then continued to have diarrhea (TMI?!  Sorry.  Not really.  Trying to give you the full picture here. #momlife) through the rest of the weekend but totally was acting like his wild beast self.  Wellllllll, just as I was leaving to go shoot this surprise anniversary shoot, Patrick decided to ralph alllllll over himself and his high chair where he was sitting to eat dinner.  GREATTTT.  My lovely mother in law walked in just then and took over for me and tossed him in the tub.  When I got home he was still acting like his crazy self, so I thought it was just a fluke puke, so off to bed he went.  Well, he wasn't in his bed for more than 30 minutes and I hear him puke AGAIN.  Dear lord.  So much vomit.  So many loads of laundry.

I whisked him out of bed, washed all of his stuff, and he camped out on the couch just as you see above until I was sure he was feeling a wittle better and he could go to bed.  I didn't sleep well Friday night cause I was so worried he was gonna puke all over himself again.

Well, Saturday came, I had Henry's newborn shoot to go do, and Mike reassured me he was feeling better and he sure seemed to be...so I was hoping his bug was gone.  Patrick was fine all day Saturday and Sunday, then I totally jinxed it and told someone at work earlier today that he was completely better.  I ATE MY WORDS. 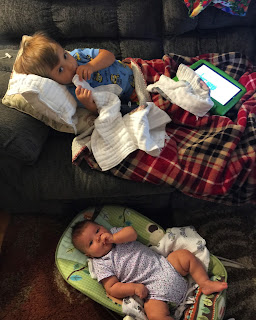 Mike called me at 10am saying Patrick just got up and again, puke everywhere.  You've got to be kidding me!  Not again!  So 7 days of this tummy bug = I'm calling the doctor.  I know it's a bug, but wanted to make sure it wasn't anything else.  Patrick has been having on and off puking for a week and constant diarrhea for a week, teetering back and forth from lethargic to crazy.  I needed reassurance this wasn't anything else, so I called the doc.  They said to bring him in, mostly because his vomit was red (which could be blood, which mom of the year here didn't even think of, just assumed it was something he ate).  Mom guilt was on high-alert because I wasn't home to take my baby to the doctor--but luckily Mike was off all day and he was able to, so that made me feel a smidgen better.

Luckily Patrick doesn't have anything that seems serious, just a long-running 7-10 day stomach virus that's plaguing him, and seems to keep coming back by triggered acidic foods...so!  Back to a bland rice, banana, bread, diet he is for several days till all of this is really gone.  But, what a doozy of a sick week it's been.  Not sure any home sickness is worse than dealing with bodily fluids coming out from all ends, but I am really REALLY hoping we are at the end of this plague and it doesn't come back anytime soon.  Here's hoping...and also hoping Rosie doesn't come down with it (or heck, me or Mike either!!).

SO!  Onto happier things from this past weekend...cause, besides these little puking bouts from Patrick Friday night and Monday morning, he was quite a happy little churro. 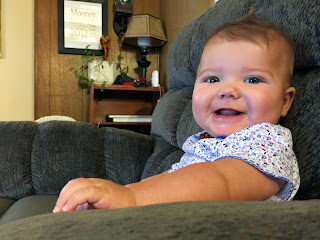 I'm biased, but I have the happiest little lady EVER...who also looks way older than she should.  Nevermind is she 21 weeks (!!!) old today and gonna be 5 whole months old on Sunday.  TOO FAST.  TOO FAST. 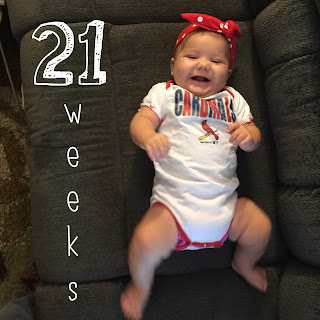 Speaking of Rosie, see that cute little red and white polka dot headband?!  That's totes part of her Halloween costume: she's gonna be Rosie the Riveter.  Just wait till you see her costume.  It is AMAZING. 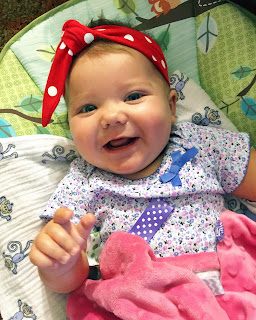 Cause I can't just share ONE picture of my little lady smiling...sorry.  Not really. 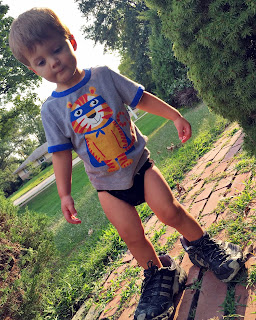 After I posted Patrick Tales last week I swear this kid keeps doing more and more funny stuff each and every day.  Last weekend he wanted to go outside and I told him not without shoes on...so this was his response.  Touché little man, touché. 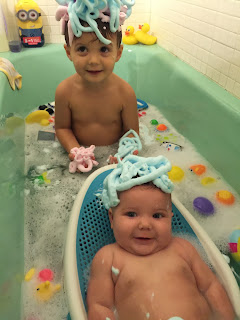 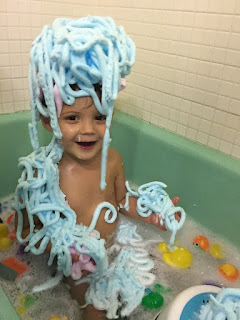 I found foam soap at Target and OMG, may have went a little overboard during bath time this weekend.  BUT!  Was well worth it--the little fella and lady LOVED it.  And we're now officially out of it cause mama bear here let them use it all.  Oops. 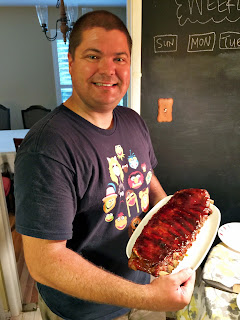 Mike made ribs on Saturday night and they were the best ribs I've ever eaten.  I'm literally drooling over my keyboard as I type this looking at how delicious they look in this pic and how I remembered them tasting.  Seriously.  This man of mine has a knack for BBQing and is oh-so-good at it.  I love reaping (and eating) the benefits. 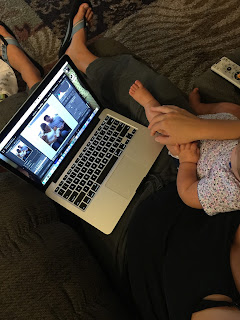 Ro Ro has been overly helpful lately in my photo editing endeavors...aka letting me edit while she just sits there patiently and stares at the computer.  Such a calm little burrito she is! 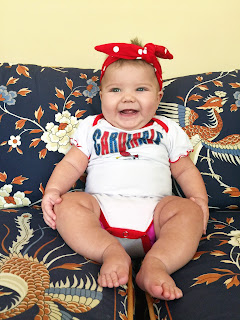 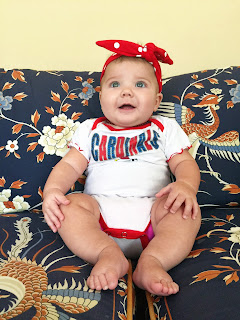 More red headband pics...just cause...cause I can't resist.  She is my favorite. 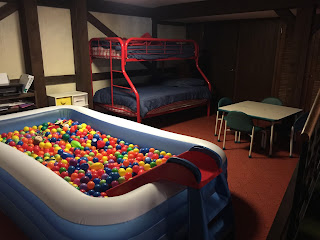 We picked up bunk beds (and mattresses and bedding! SCORE!) from a family friend this past weekend and now we officially have a siesta spot that's not a couch for guests!  Tiff: I know you're reading this: YOU NEED TO COME FOR A VISIT ASAP!  Seriously.  Long weekend at the Mooneys!! YES PLEASE! 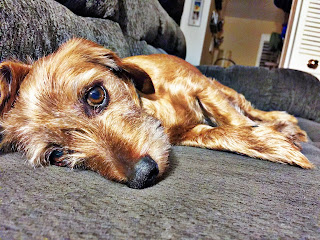 Scooter in his natural habitat: le couch.  Also!  The PicTapGo! iPhone editing app is still my fave and go to editing app--as you can see with the pic above.  If you don't have it, get it.  Super easy editing that makes your pics look ah-mazing on the go. 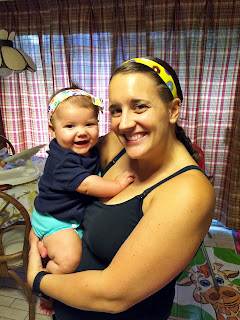 Mike snapped this pic of me and my smiling little lady this weekend and I just love it.  She's getting too big too fast!  But I love how her personality is shining through more and more each day.  That is just the coolest thing to experience as a parent: watching your kiddos grow up! 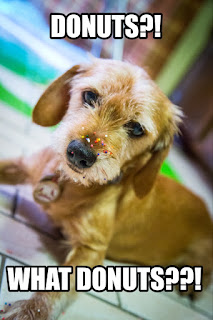 I'll leave you with this hilarious (can't take the credit!  My friend Sarah sent it to me of another dog and I totes copied it) meme I created of Scooter.  You're welcome.  Have a great week friends!
Email Post
Labels: family family fun Patrick Rosie Scooter sick