Hands down, my favorite favorite part of both of our little burritos' births was finding out if we were having a boy or girl.  It is the best best best surprise ever, and if we have more kiddos, we definitely will be waiting until their birth to find out the gender.

For some people, some of our close family and friends especially, waiting 9 + agonizingly long months to find out if we were going to have a boy or girl was torture for them, because it is something they'd themselves never do.  Nowadays you can find out as early as 10 weeks (WHAT?!!!) what you're having by a simple DNA test.  I get it.  People want to know what they're gonna have so they can plan plan plan for 3/4ths (or half, if you find out at your 20 week ultrasound) of their pregnancies about their upcoming little man or lady's arrival.  However, as much of a planner as I am in seemingly everything else in my life, finding out the gender of my unborn kiddo is something I don't want to know or plan for: we'll find out and start plannin' when he/she gets here. 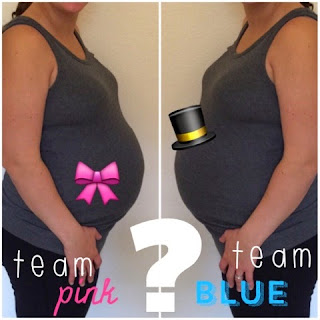 Since I have a profound love for lists, I thought I'd make a handy dandy little list of our top 5 reasons why we waited (and will wait in the future!) to find out if our bun was going to be a girl or boy.  If you're a waiter like us, I'm sure you sympathize in some of these reasons as to why you wait.  If you're not a waiter, here's a glimpse into our reasons why we are.

5. It drives people NUTS not knowing what you're having.  This is a fun reason for us, because for some OCD people who HAVE TO KNOW EVERYTHING, not knowing if their friend's babe is a boy or girl is absolute torture, and it just makes me giggle and laugh watching them stir and speculate.  Most people are planners, as I said above, and want to know what they can plan for--even if it's not their kid.  They want to know what they can buy for this kid, and it's imperative to them that they know the gender (and name too, for some) before they purchase anything.  But you know what?!  That kid, gender known or not, ain't wearin' that personalized onesie until they're hatched, so knowing the gender doesn't get the kid here any faster to wear their new custom garb you got them.

4. The annoying questions, for the most part, stop.  I say for the most part, because some, undeterred in their pregnancy-related question assaults, will stop at nothing at commenting on every aspect of your current swollen state (and should probably read my post here).  Anyways, once people ask you the most common question when they know you're expecting, "Is it a boy or girl?" and find out that you don't know, nor are you finding out, shut up.  They have nothing else to ask, because their onslaught of "Oooooh!  A girl!  What's her name going to be?  Were you wanting a girl?  Are you upset that you're having another girl and not a boy?" and so.many.more.such.questions. cease to happen.  It throws people for a loop that the gender is a mystery so their questions are thrown by the wayside too.  Usually you can then avoid the name questions, however, some people will still ask you if you have names in mind for both a boy and girl (Duh.  Of course we do, cause we don't know what we're having!!  We plan for both).  I deflect these questions as well with, "We're surprising people with our names as well once our kid is here."  {mic drop}

3. You get actual useable baby stuff, not 10,000 0-3 month pink or blue onesies that your gigantor child outgrows by week 2.  This proved very true for our first when I was overwhelmed with more baby showers than I could count on one hand.  However, I think out of the 6 (!!!) showers I had, I got 5 outfits TOTAL, and all had turtles or ducks on them in green and yellow.  Instead, we were spoiled with all of the actual stuff we needed for this new human to survive at home with us: stroller. car seat. bottles. diaper bag. diaper service. sound machine. baby bath. lotions and soaps and other things that make babies smell irresistible. and so much more tangible items that we could actually use for our kid, regardless if they were a boy or girl.  And you know what?!  After both of our kids were born, we were spoiled once again with all of those clothes people were dying to give us at the shower but the OCD in them had to wait till they could confidently buy blue or pink.  It.was.awesome.  We got stuff, and then the clothes, which was perfect timing since the kid was here and could actually wear them (and they were given to us in the correct sizes too (no need to hassle with returning! woot!), because my heifer children aren't lightweights at birth and are unable to sausage themselves into newborn anything, which you seem to be loaded down with at your baby showers).

2. It won't be wrong.  EVER.  Ultrasounds, and even DNA tests that are done incorrectly, can be wrong.  I cannot tell you how many stories I've read from other mamas on some of my Facebook groups all about how their little girl was suppose to be a boy and vice versa because that's what they were told at their ultrasound, or parents who were told at their 20 week ultrasound they were having a girl, and rightttttt before the birth they got a bonus ultrasound and low-and-behold, their girl is a boy!  Um, no thank you.  For some reason, even if we wanted to find out, I'd still have some hidden doubt that the sonographer or DNA test was wrong, and we were really having the opposite gender.  Not kidding.  That would bother me, because for me, I need to see--in the flesh!--if the babe is a boy or girl for me to believe it, and the best and most accurate and never wrong time to do that is at their birth.

1. It's the best present, best surprise, and best thing ever.  Nothing will ever top that feeling, EVER.  As dramatic as Patrick's birth was versus Rosie's chill, calm, and scheduled birth, both of them gave us the best surprise ever and got us through that day.  With Patrick's, I NEEDED that motivating factor of finally finding out what this kid was growing inside me for the past 9+ months to get me through labor, attempted delivery, and my c-section.  With Rosie's, finding out what she was calmed my nerves and anxieties about having 2 kids under 2, and having another c-section.  I vividly remember Mike saying, "It's a boy!" and "It's a girl!" with both of their deliveries, and that's something that isn't always said if you know what the kid already is.  It is just the best gift ever, because no matter what you're expecting, the joy of knowing your kiddo is finally here trumps any existing feelings you may have had (I really wanted another boy for #2, like REALLY bad.  But, as soon as Rosie came out, those thoughts vanished and I can't imagine her being a boy--I am loving every.single.second. of having a daughter now and it is the best thing in the entire world).

BONUS! The speculation part is quite fun for the parents as well.  I had a dandy of a good time speculating what both Patrick and Rosie were going to be, and I even blogged a whole post about old wives' tales pertaining to my pregnancy with Ro Ro.  With both Patrick and Rosie's pregnancies I teetered back and forth between boy and girl with both of them, and I actually liked those thoughts tearing me towards "it's definitely a boy!" or "it must be a girl!" thoughts for 9 months.

So that about sums it up for why we waited to find out what our kiddos were.  I totally get some people not being able to do this, and that's totally fine!  To each their own!  BUT!  The same holds true for us--to each our own, and our own is waiting till birth day to find out if our cookin' kiddo is a boy or girl, cause, as #1 echoes, it's the best freaking gift everrrrrr.