Even though this post is technically about this past weekend, I'm going to back track a wittle bit and hit on some stuff I missed last week (aka share some pics I forgot to share).  And, side note, I just realized this blog is not only a fantastic way to document our life's happenings and essentially a digital baby book, BUT!  It also is a great archive for pictures...so that, let's say I cannot find a picture that I know I took, chances are I posted in in a blog and can easily go back and find it and resave it.  Smart, huh?!  So, maybe a little insight for you as to why I post so many pictures :) 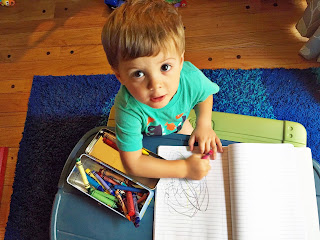 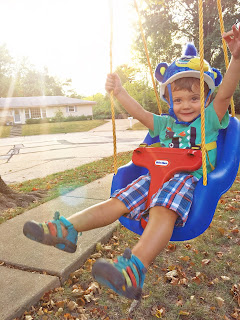 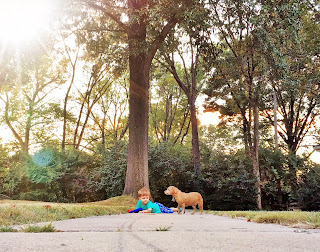 Okay!  Back on track!  The above pics were from last Thursday and I snapped them all with my iPhone.  Seriously, I know I sound like a broken record here (and in a year I'll be boosting about how awesome the iPhone 7's camera is...so bear with me), but dang.  This iPhone 6S takes ah-mazing snaps.  Seriously.  Some of them look like I take them with my big Canon camera!  I mean, I do do a little photo editing here and there, but not too much to still keep the image I originally snapped in tact.  Also!  If you're an Instagram lover like me, go follow the @momtog account--holy AMAZING tips and tricks for taking great pics of your kiddos WITH your iPhone.  It's my new favorite account. 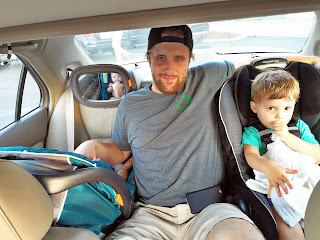 Remember my post last week about Rosie blowing raspberries (or "blowing blueberries", as Patrick calls it?!)?  Well, I snapped this pic of the kiddos + uncle Charlie wedged in the backseat of my car as we headed out to dinner...and Charlie's amazing positioning allowed him to get that lovely video of Ro Ro blowing raspberries. 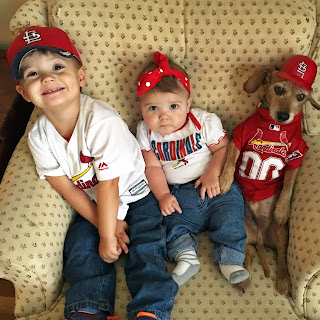 Friday night was the Cardinals first NLDS game against our big rivals, the Chicago Cubs.  I snapped this pic of the burritos before it was time to leave, and it turned out so cute!  A side note: Patrick lately does NOT like getting his picture taken (WHATTT???!)--he will literally say "NO NO NOOOO!" and swat his hand towards me to try and bat the phone out of my hand.  Uh, no me gusta little man.  However, what I've noticed is that if I go to take a picture of Rosie or Scooter (or both of them), he DEMANDS to be in the picture and wedges himself next to them and gives me the best smile ever.  Crazy, huh?!  So if I ask him to be in a pic he goes crazy and refuses...but if I try and take a pic of Rosie without him he gets offended?? jealous?? whatever...he wants to be in the pic!  So, you can guess how I got him in the above pic--I tried first to take a pic of just Rosie and Scoots and BAM!  Up he went with the most perfect smile.


With that said, I also recorded another gem of a funny video last week (gosh, along with the goat video I'm 2 for 2 this past week.  Woot!) where Scooter essentially proves to the world that he indeed is the laziest dog EVER.  I crack up every time I watch this video cause he's like, "okay, okay, gonna get uppppp...NOPE."  Bahahahaha!  And Rosie is just chillin' there like whatevs, I'm watching Patrick destroy his choo choo tracks. 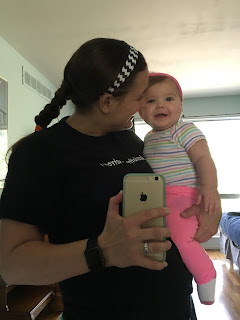 Saturday morning Mike had to work earlier than usual, so we headed to the park (see here) for some impromptu pics and then Lion's Choice for lunch.  It was delish.  I snapped this pic of Ro Ro and I before we headed out and if she isn't just the happiest chill little lady, I don't know who is! 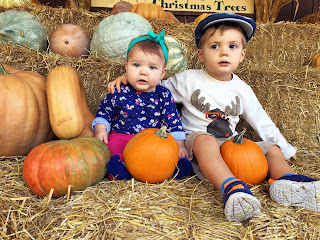 Since Mike was working 12 hours on Saturday, after naps we headed up to the Farmer's Market with our friends to look at the pumpkins (with some serious RB faces from both of my kids apparently), and then play at their playground.  It was great to have them burn off some energy (or Patrick, Rosie just sat there pretty much like above for the entire time) before we went to my parents' house to watch the Cardinals game (which, boo hiss, they lost...so they're back in Chicago today with the series tied at 1-1). 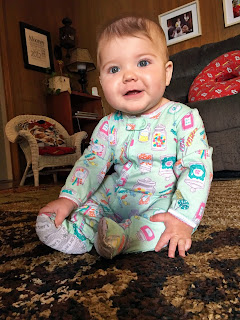 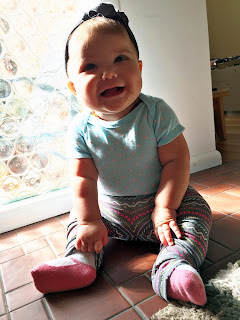 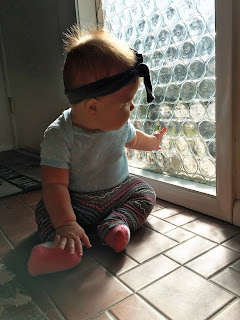 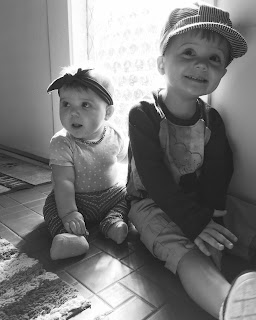 Sunday Mike didn't have to go into work until his usual 3pm, so we took advantage of a gorgeous morning and decided to hit up the Museum of Transportation...where we tried to go last week but it was closed, but it worked out because Patrick vs. the Goat was born.  Haha!

I snapped a few pics of my kiddos (again, trying to just get Rosie's pic by the light of the front door but Patrick insisted he wanted to be in the pic as well!) testing out some new filters and techniques I have been stalking learning from the @momtog IG account.  I just love the one of Rosie touching and gazing out the window.  Her hair cracks me up. 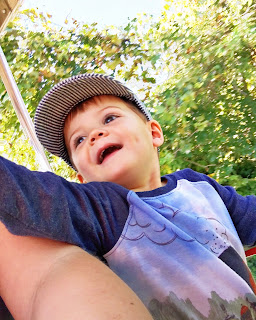 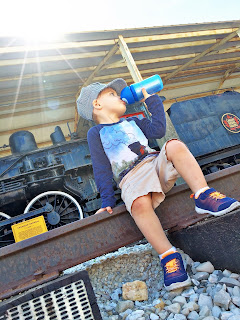 We had a blast at the Museum of Transportation.  Nevermind the fact that Mike and I said to Patrick multiple times, "Patrick, you're acting like a two-year-old!"--cause, HE WAS.  Nonsense tantrums and meltdowns not getting what he wants.  That was my favorite part!  --NOT.  Luckily those didn't last too long and we were able to distract him with something else, like, oh I don't know the bazillion choo choos that were there that he could explore or ride. 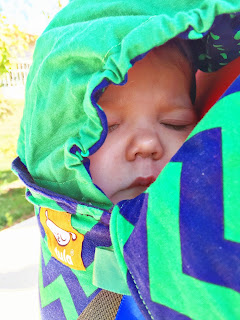 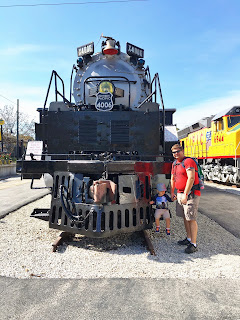 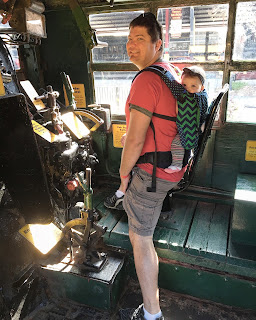 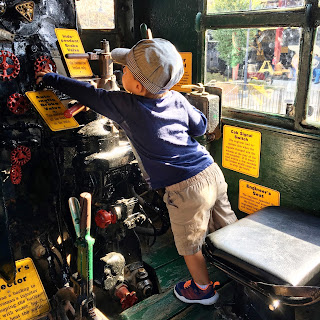 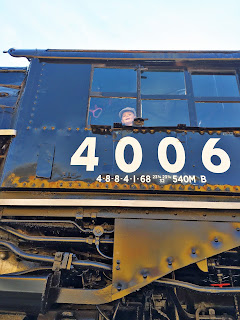 Mike especially loved the "Big Boy" and kept telling us all about it and how cool it was that one was at the Museum of Transport.  Patrick seemed to really like "driving" it--and I love how I was able to capture a pic of him looking out the window of it.

Anyways, after the Museum we headed back home for a quick lunch and naps for the kiddos--and laundry and other chores for me while Mike headed off to work...which, between Saturday at 4am today, I think he worked like 30 hours or something over the weekend.  3 big homicides in STL kept him busy.  UGH. 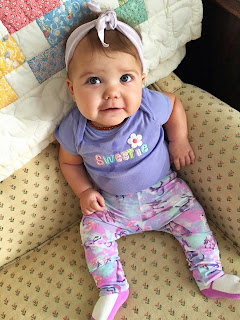 When the kids got up from their siestas I wanted to snap a pic of Rosie in her amazing unicorn leggings she had on and send them to my friends Tiff and Lauren...well, not 2 seconds after I snapped that pic of her guess who saddled up on the chair next to her wanting his picture taken?!! 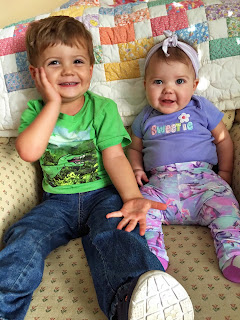 You guessed it!  And this pic just melts my heart.  They look so grown up!  Gahhhh!  But Patrick then, realizing his trusty furry sidekick wasn't in the pic, yelled for me, "Get Scooter HERE!!!" and slapped the couch next to him, so I went and grabbed Scoots so their could be a trio pic. 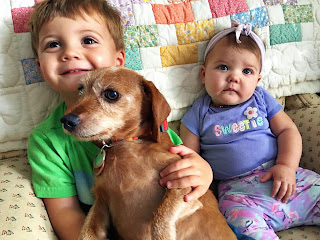 This may have been the first time Patrick willingly wanted to hold Scooter.  It was so darn cute!  Gahhhh!  These kids of mine are doing a number on my heart cause just when I think they couldn't be any cuter, this happens! 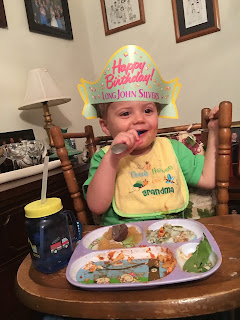 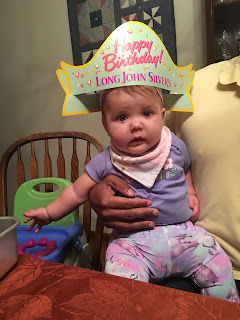 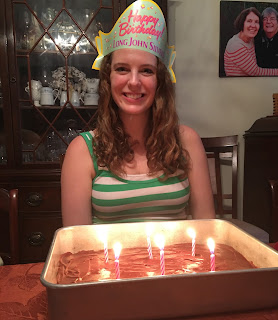 We then went to my inlaws for dinner to celebrate my sister-in-law Erin's birthday, with some vintage Long John Silver's "Happy Birthday!" hats.  That's like Mike's favorite restaurant so he was sad he missed out.

Whew.  What a weekend!  This was actually my last photog-free weekend until Thanksgiving (WHATTT??!!!)--craziness!  My brother Charlie is redesigning my photography website currently (and new watermarks and logos!  Woo hoo!) and I have at least 2 photoshoots every weekend now until T-Day.  Craziness!  But a good crazy...I sure love taking pics, and this is the best time of the year to do it--FALL IS GORGEOUS!  Hoping to get some family photos of us taken too (we need an Christmas card photo desperately!) thanks to my tripod + remote camera app.  Stay tuned :)

Anyways, that's about all I've got for this too early Monday morning...however, Mike did surprise me with donuts from my favorite shop to wake up to!  He is the best hubby EVER.  Have a great one friends!
Email Post
Labels: family family fun Museum of Transportation Patrick Rosie Scooter St. Louis Cardinals trains weekend shenanigans what's happening