Sorry Tiff, I totes realized I stoke your blog title.  But it's just perfect so I'm borrowing it for my post...so sorry! 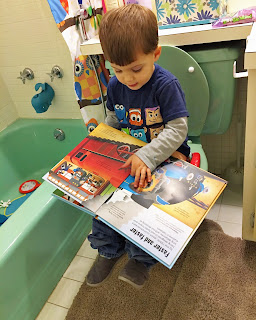 Anyways, before I divulge into our potty training memoirs as of late, let me give you a bit of a backstory with anything potty related with my lovely son Patrick, who will be 3 in a month.  First off, up until recently, he LOATHED the potty -- wanted absolutely NOTHING to do with it 99% of the time.  The 1% of time that I (or my mom) was able to coax him onto the potty (spoiler: nothing happened!), I snapped a pic...see above.  Honestly, whenever we'd ask him if he needed to go potty he'd scream "NOOOOOOO!!!!"  And sometimes even throw in a "Put diaper onnnnnnn!!" --meaning he wanted his dipe on and to go in that.  FINE.  I wasn't about to push something that he clearly was NOT ready for, and honestly there was no need to push him.  He starts preschool in August, and HAS TO BE potty trained by then, so I figured IF pushing NEEDED to happen, it would in July.  Until then he could continue to use his diapers and not want to use the potty.  I was okay with that.  However, I was prepared IF and WHEN he wanted to start: we got a potty seat for the toilet, a little froggy potty for the bathroom, lots of 4T undies with minions and Thomas and Paw Patrol on them, these awesome learning/training pants, marshmallows and m&ms for peeing, small toys (cars and trains) for #2.  I was all set.

Our parents as teachers gal came earlier this week (Tuesday), and in my email to her about what to discuss, this is what I said,

"He knows exactly when he needs to go (#2 especially) but SCREAMS for his diaper to be on. We try and do undies after bath before bed and 50% of the time he pees in them and laughs about it.  Sooooo, I think he's ready physically but I don't think he is mentally.  I'll push it in July when we have to."

I mean, that's pretty much exactly what I typed in the first paragraph.  More than capable but the mentality of wanting to go wasn't there.  Again, fine by me--he'll do it when he's ready. 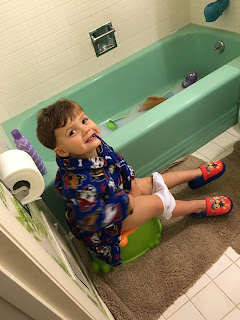 Well, Wednesday came and holy toledo, Patrick was a different kid: both during bath time and then twice while he was watching Paw Patrol, he says to me, "Mom I gotta pee!"  And so off to the bathroom we went and low and behold, HE WENT PEE.  Look at how happy he is!!!  He was sooooo proud of himself (as was I), and I was seriously shocked.  Not only did he go but he initiated it and ASKED THREE TIMES.  I was floored.

Thursday morning he woke up and Mike, who was home with the kiddos in the morning while I was at work, asked him if he wanted to wear his big boy pants and go on the potty.  NOPE.  He was adamant about having his diaper on.  Okay, maybe Wednesday was a fluke....but nope, at the breakfast table he told Mike he had to pee and off came his (dry!!) diaper and he peed on the potty!  Immediately he asked for his reward: a marshmallow. OMG!  SO NUTS.  Mike put him down for a nap (in a diaper) and when I got home he woke up about 3:45 and was dry (!!!) and I asked if he wanted big boy pants on and he said yes!  About 2 minutes after I put them on him he said he had to pee -- and he did just that!  He ended up peeing another time before we left for my in-laws for dinner...where he insisted on wearing his big boy pants again.

Now, I was skeptical about how he'd do not at our house, but he ended up doing great -- he asked to go potty twice over there and got 2 marshmallows for his duties!  I was sooooo proud of him!

When we got home he got a bath and then saddled up to watch Paw Patrol while I fed Rosie in her room.  Well I hear little feet walking down the hall and he comes in and says, "Mom I gotta pee!" so I popped Ro off and off to pee he went!  Another marshmallow and another proud boy!

I put Ro to bed and went back to Paw Patrol with Patrick.  I noticed he got up to go hide behind the couch (his signature tale for #2) so I said, "Do you gotta poop buddy?!!"  And he said, "Uh-huh..." So I whisked him up and said let's go on the potty so you can get a new toy!  He was mildly hesitant at first but then said "Mom I need to poo!!!" So off we went.... 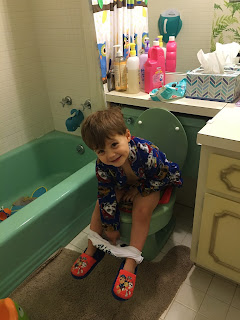 And OMG, you guys, HE DID IT.  He went #2 on the potty!  He was so so so happy with himself (as was I! -- we FaceTimed a lot of people to tell them!!) and got to pick a brand new toy (a little Ryder (from Paw Patrol) figurine) for his job well done.

He then went to bed and fought me tooth and nail to NOT have his diaper on but big boy pants.  I told him his diaper was still okay for when he's sleeping (for now!) and he seemed to agree with that.  Maybe I should have put undies over his diaper to make it more like he was wearing them?!!  Ha!

So that is the saga which is our first installment of potty training diaries.  I have been texting a few of my friends with my SHOCKED reports (basically everything you just read above) and how this is too easy and too good to be true and I'm sure he's gonna wake up one day and be like NOPE and revert back to wanting his diaper on.  I'm actually anticipating that to happen so if/when it does I'm not surprised.  Obviously I hope not and and hope that he is just POOF potty trained, but I'm being realistic too.

I'm anxious to hear from Mike later this morning about how going on the potty is going today...and how it will be when they go out and about for Mike's birthday lunch later.  Stay tuned, cause I'm sure there'll be another diaries installment oh so soon!  Lucky you!