It is no secret here on el blog how much I love my aunt Kate.  We spend a'many days at her fabulous lake house in the summer and she spends a'many days in STL watching Patrick during the school year while both Mike and I are at work.  I'd have to say she is probably my favorite person on the planet--definitely the first person I call for news, to complain to, or to share excitement with (minus Mike).  I love her! I made this lovely chalkboard invite...but I blurred out the important deets cause, who knows, there could be creepers on here and they don't need anyone's address or phone numbers!

So this secret was oh-so-hard to keep from her, because I can't tell you how many times I wanted to call her and tell her about the idea I had for her surprise party.  Luckily I remembered the party was for her and resisted calling to chat :)  The party planning committee (aka my mom, my 2nd cousin Nancy, my aunt Mary, and me) have been planning this soiree for MONTHS.  Seriously.  Like since the end of this summer--heck, even the invites went out like 6 weeks before the party!  This was going to be so exciting and HUGE if we could pull it off.  We decided to have Kate's favorite things served: dips/appetizers and chocolate desserts, as well as her favorite beverage, diet sunkist soda.  We also decided to have it in our basement, because, well, our basement is gigantic and has turned into a party locale lately (and we're totally cool with that)--so boom.  Party was planned, invites were sent, and we were ready! 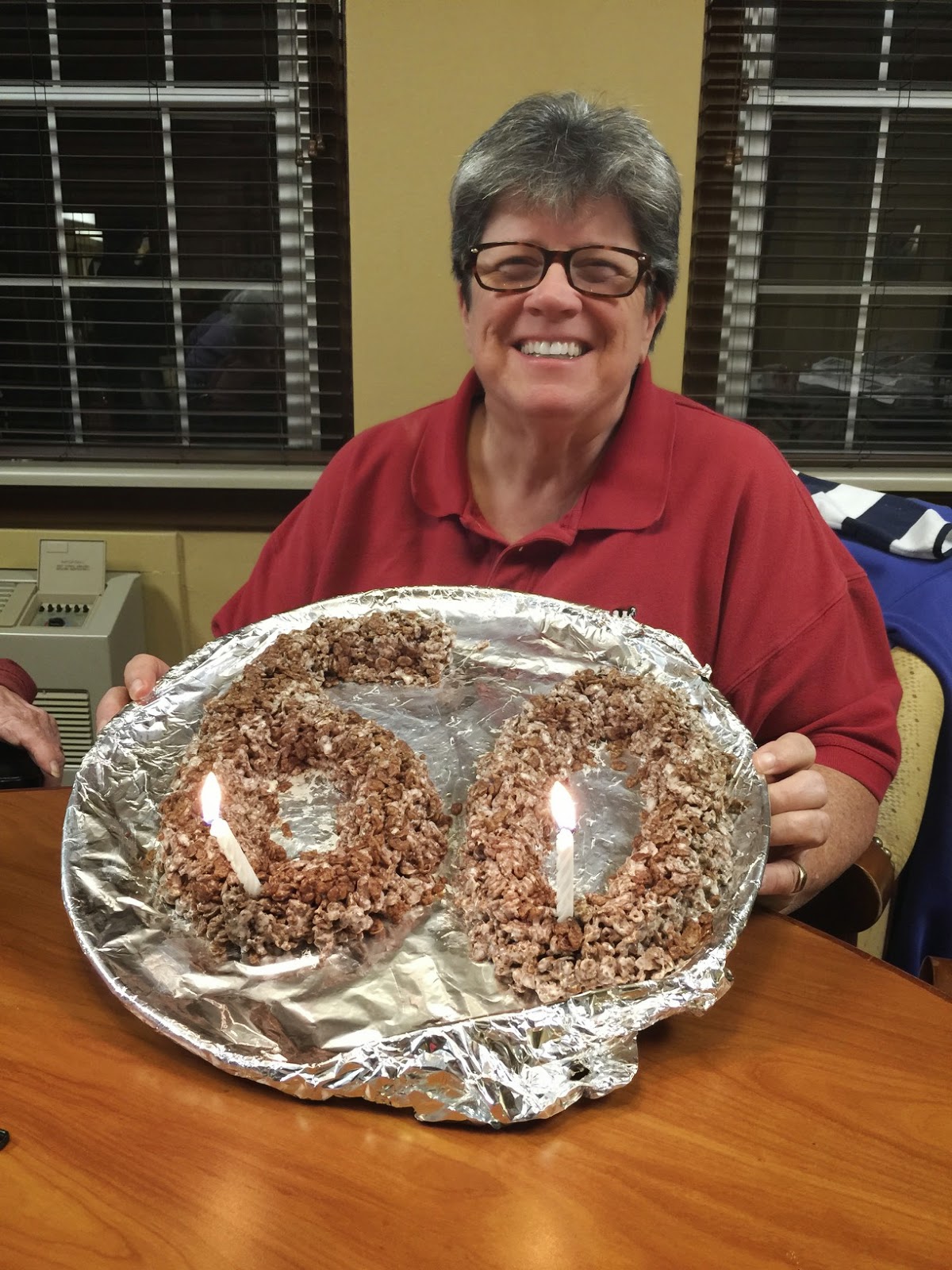 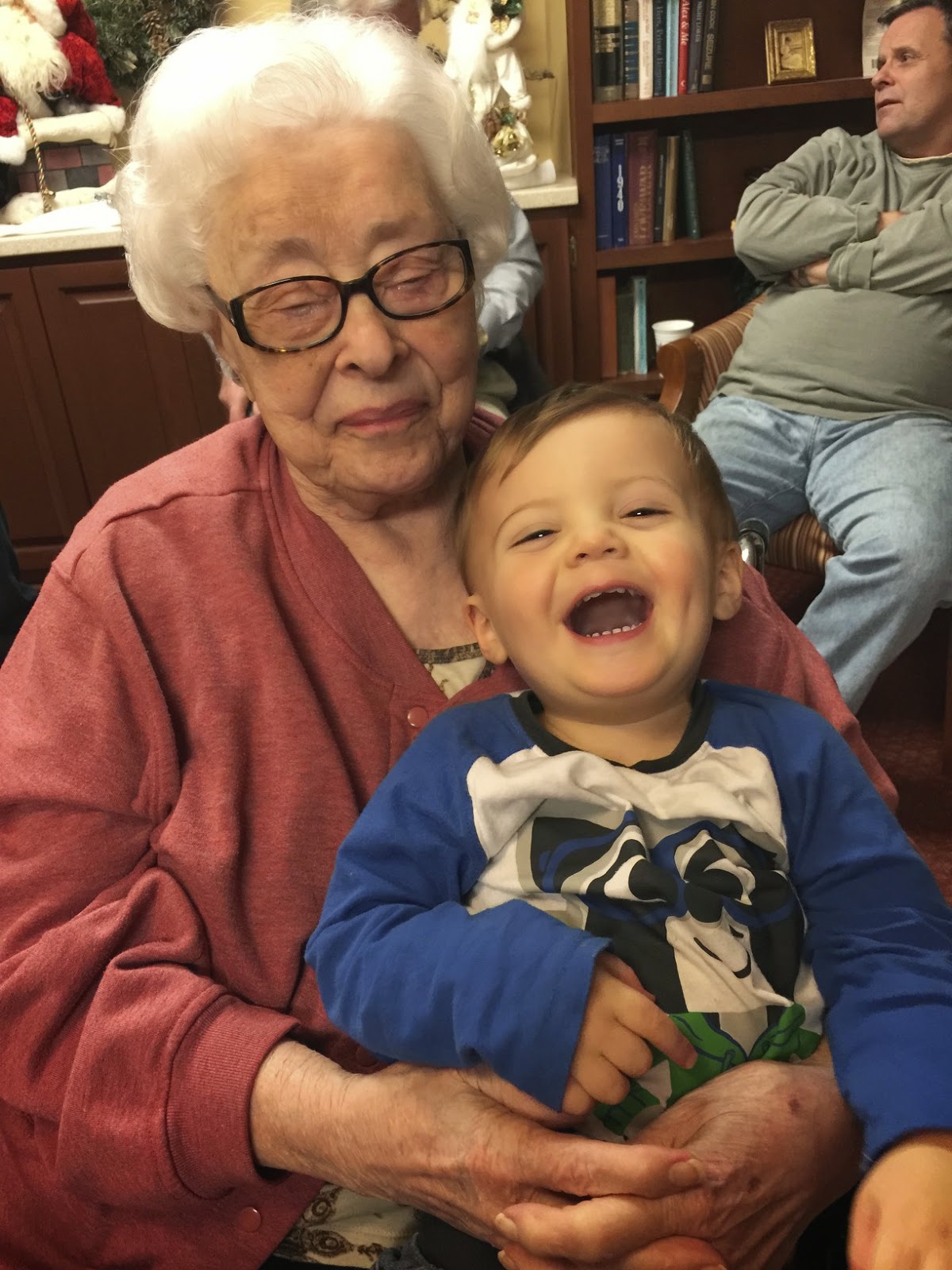 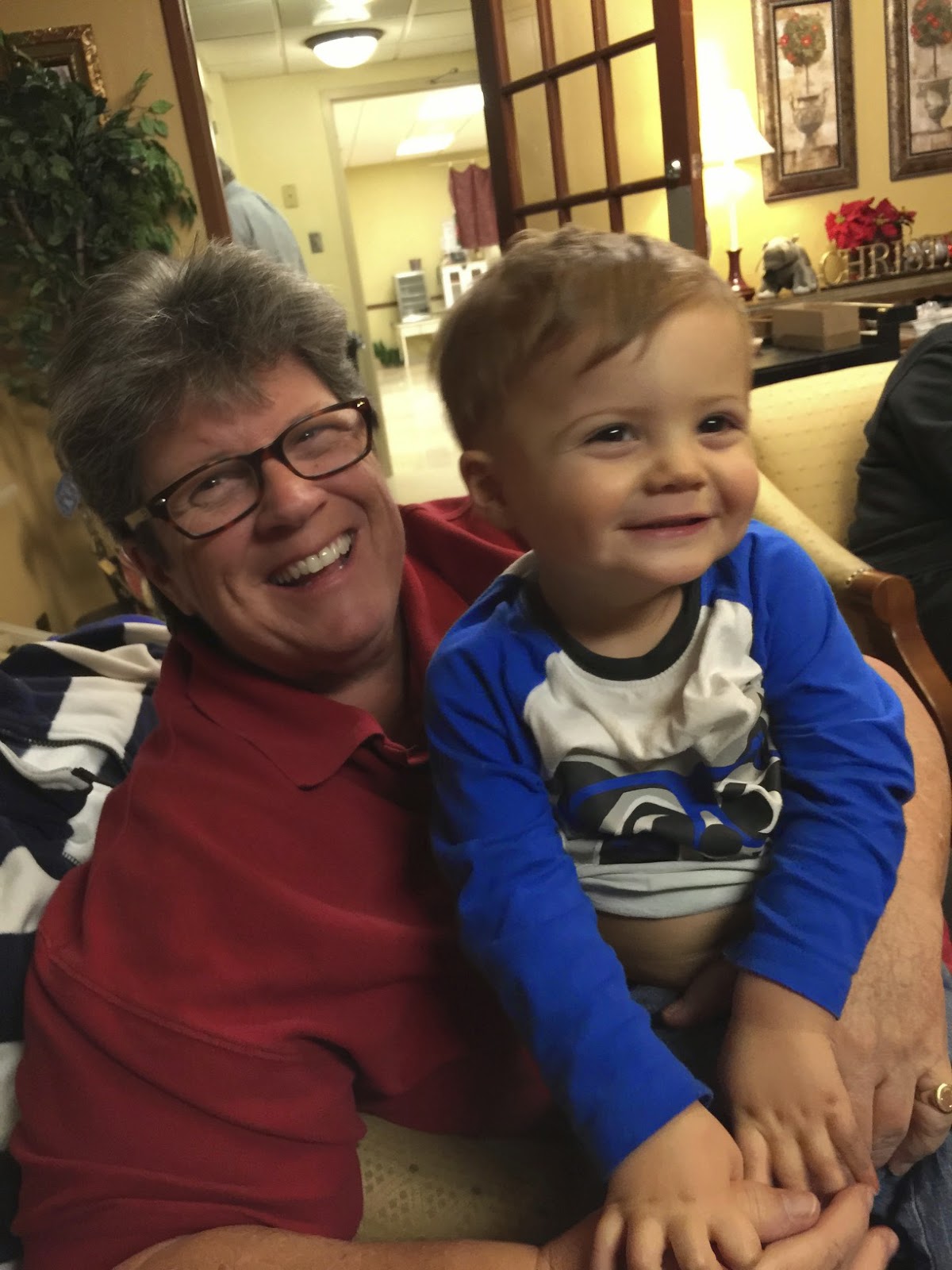 Kate's real 60th birthday was on Thursday--we had a fun little shindig at The Pond for our family: IMOS, soda, and chocolate rice krispy treats for dessert!  Patrick loved running around with Kate's balloons attached to him, and then giving his Goose and Kate some snuggles before we had to head home for bath and bed.

I'm fairly certain Kate thought this was all we were doing for her birthday, and if that was the case, I think she was totally happy with it.  But, alas, it was not.  Little did she know, we had people flying in from out of town for her big party on Saturday!  Hehehehehe!

So a few weeks ago I had called her and said that my mom and dad were busy, the Mooneys had a wedding to go to, and Mike and I were in desperate need of a babysitter so we could go to this police function.  She said she'd love to babysit, and put it down on her calendar, and we'd hammer out a time later.  Earlier this week we were chatting and she asked if she still needed her to come babysit on Saturday, because she didn't know if the police thing was canceled due to the Ferguson stuff and if Mike was going to have to work when he was suppose to be off.  GAHHHH!  Didn't think of that when I made that excuse!  I told her that yes, it was still on, and yes, even if he had to work we were going to go and his sergeant said it'd be okay if he came in late because he really needed to attend this event.  Whew.  Save.  On Thursday night I asked her if she could come at 5:30, cause we had a late afternoon birthday party to go to for one of Mike's co-worker's kids and that would give us enough time to get home and get ready before she came over.  She said that was fine--so we were all set.  The guests were told to arrive by 5pm (and not till after 6pm if they couldn't make the surprise) so they wouldn't be showing up if she came early.  Even though I told her 5:30pm, I thought if she came early it hopefully wouldn't be before 5pm...still giving everyone time to arrive for the surprise.

On her party day I was so excited and nervous and excited and anxious about the whole deal.  I LOVE hosting parties (as long as I'm not the focal point.  Showers = not my cup of tea.  I love throwing them, I hate being thrown one.) so I was in a great mood all day.  I kept "Find My Friends" open on my iPhone all day so I could track her and see where she was...so that if she did decide to come early or something, I'd know before she was knocking on our front door.

However, there was one major snafu that happened around 3pm that day: I text Kate a pic of Patrick in his new cowboy boots and was like, "He can't wait to show you his new boots tonight!" and she replied, "Change of plans.  Left the lake, something dragging on my car, something's broken, so I called Aunt Mary and she's going to watch Patrick tonight since I won't make it." Ruh-ro.  I was speechless!  Apparently so was my Aunt Mary when she called her too!  Long story short, my mom ended up calling Kate and saying that her plans with her college friends got canceled (or whatever her excuse was) and that she had secretly planned a little cousin get together at Hacidenda for dinner for her (and Patrick), so she needed to come.  Luckily her neighbors Tom and Wilma were heading to STL at the exact same time that she was to be arriving at our house to babysit because they were going to dinner and a movie up here (haha, she thought, they were actually coming here!).  So, phew, saved.  And totally guaranteed that she had absolutely no idea about this partay.  Yee haw! 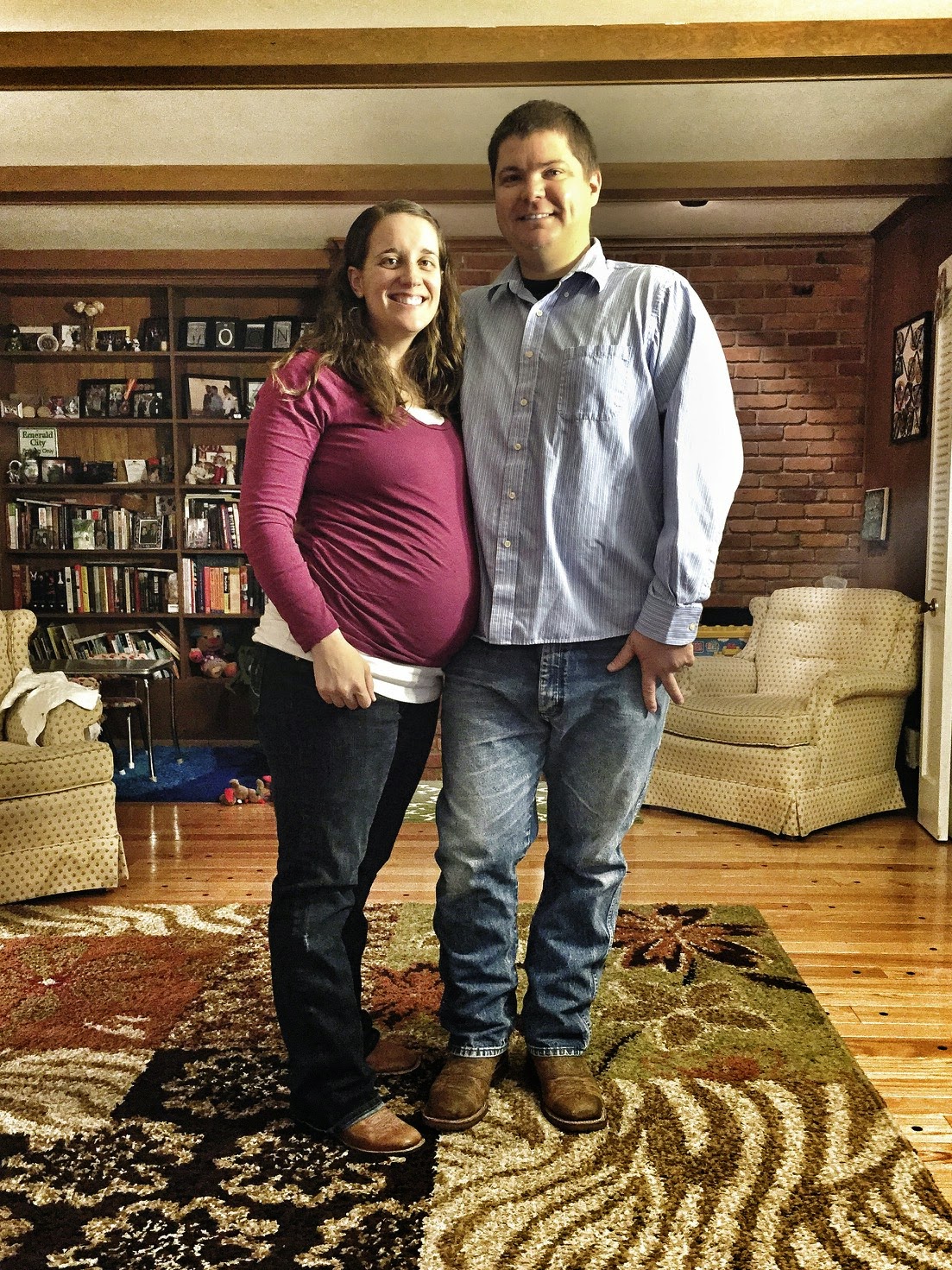 Mike and I even took a few pics together and posted them on social media with "date night!" as the tag...just to continue to throw her off if she checked Instagram on her way.

We had all of the guests park on other streets and use the cut-through path (or a shuttle--aka a guest's van) to bring them to our house, because Kate is savvy, and she'd know in an instant something is up if there's a ton of cars she recognizes outside our house for no reason.  Everyone arrived, per the invitation, by 5pm.  It was perfect.  I was tracking Kate on Find My Friends and she was slated to arrive at 5:30pm, so this was great.  All of the guests were enjoying themselves in the basement (along with Patrick being Mr. Entertainer and putting on a show for them in his ballpit) and chowing down on ALL.THE.FOOD.

Literally when Kate was pulling in the driveway I shouted downstairs, "SHHHHHH!  She's walking in!!!"  And it went dead silent (super impressive, I must add for the 50+ people that were in our basement).  Kate raced in and was like, "I've gotta pee!" and I was like, "Oh, okay, Patrick and Mike and my mom who's here are all playing in the basement for when you're done in the potty." I made sure to say this nice and loud downstairs so they knew she was coming.  Once she got out of the bathroom, she wanted to chit chat about some of the stuff she brought and what not.  I was so anxious to get her downstairs I don't even remember what she was saying to me!  Haha!

So the next part needs no explaining...because my fabulous cousin Ashley got it on camera!  So watch as she comes downstairs with NO IDEA what she's walking in to!


Needless to say, she was completely SHOCKED.  It was awesome.  I have never seen a surprise party go off this well and really totally shock the person when they walked into the room.  Definitely the best feeling to see how loved and appreciated my aunt Kate has been! 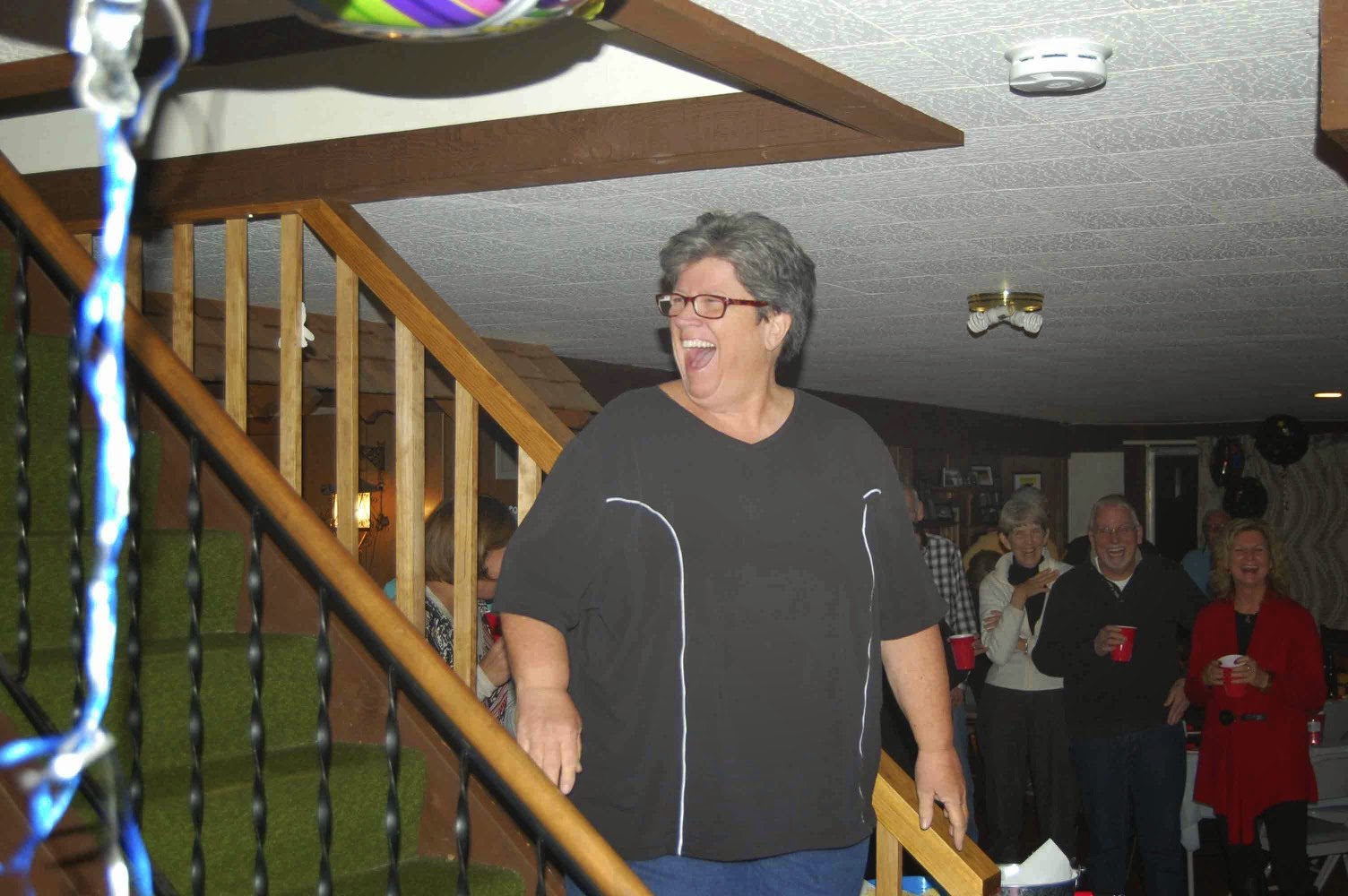 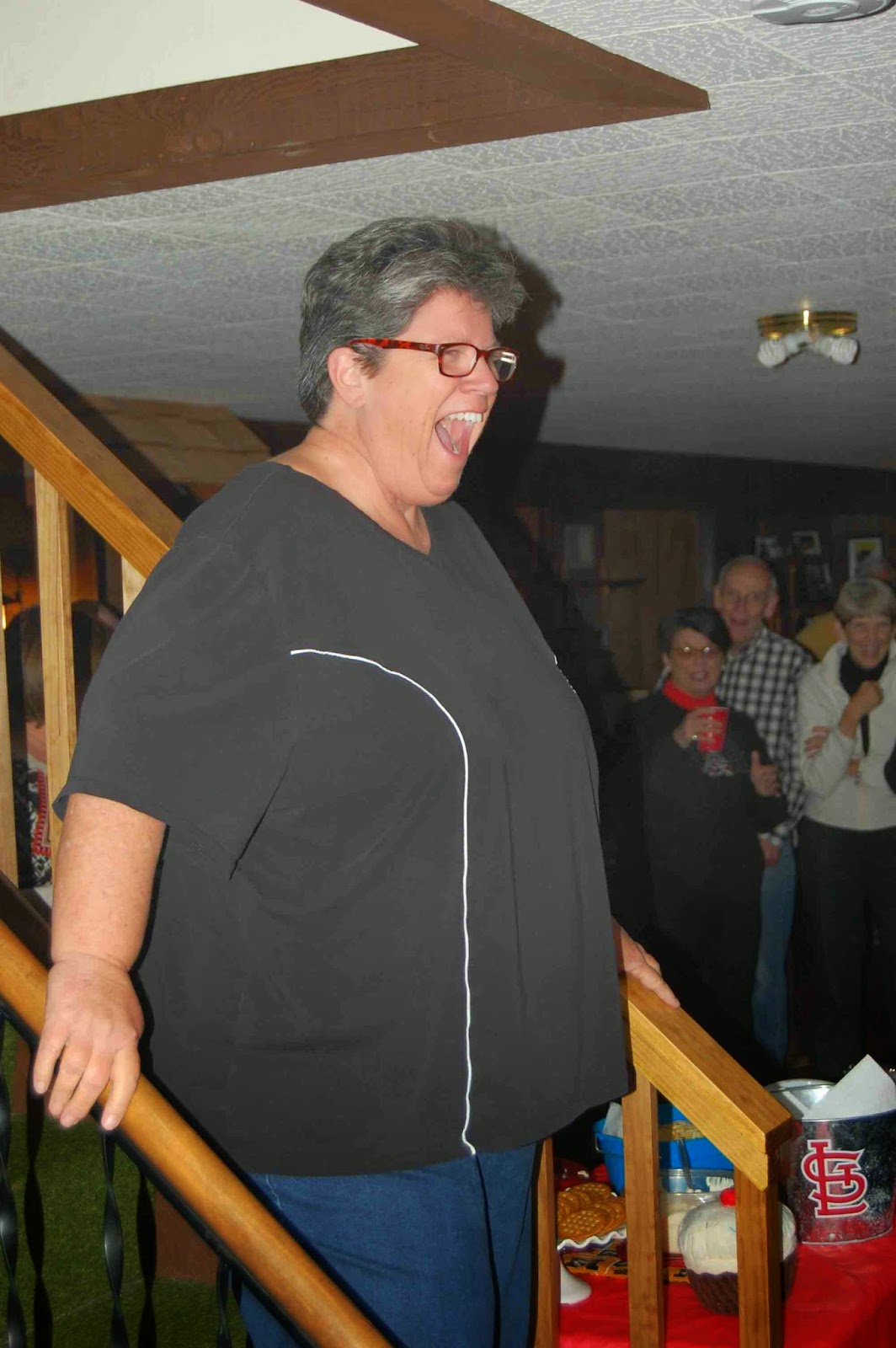 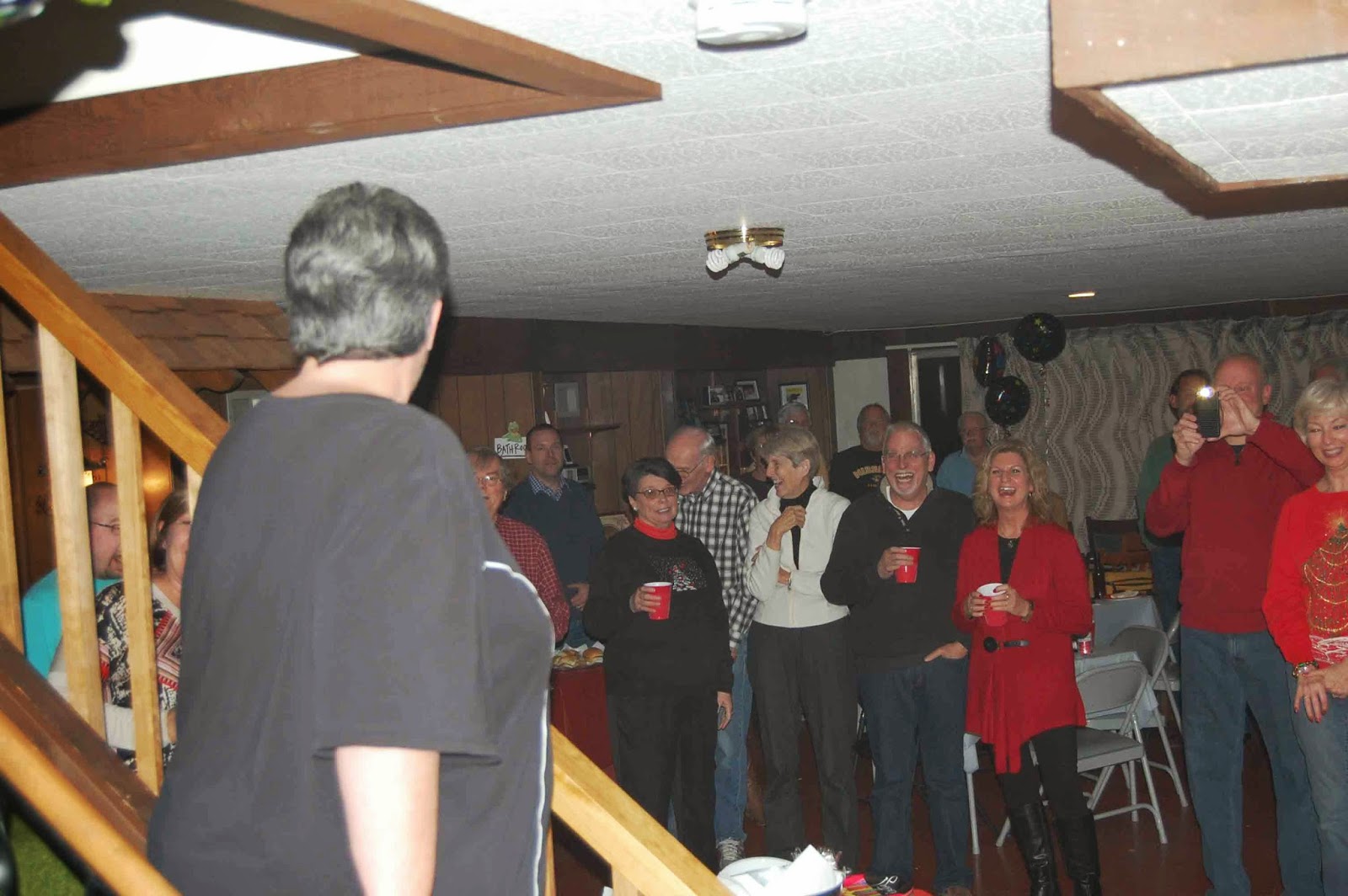 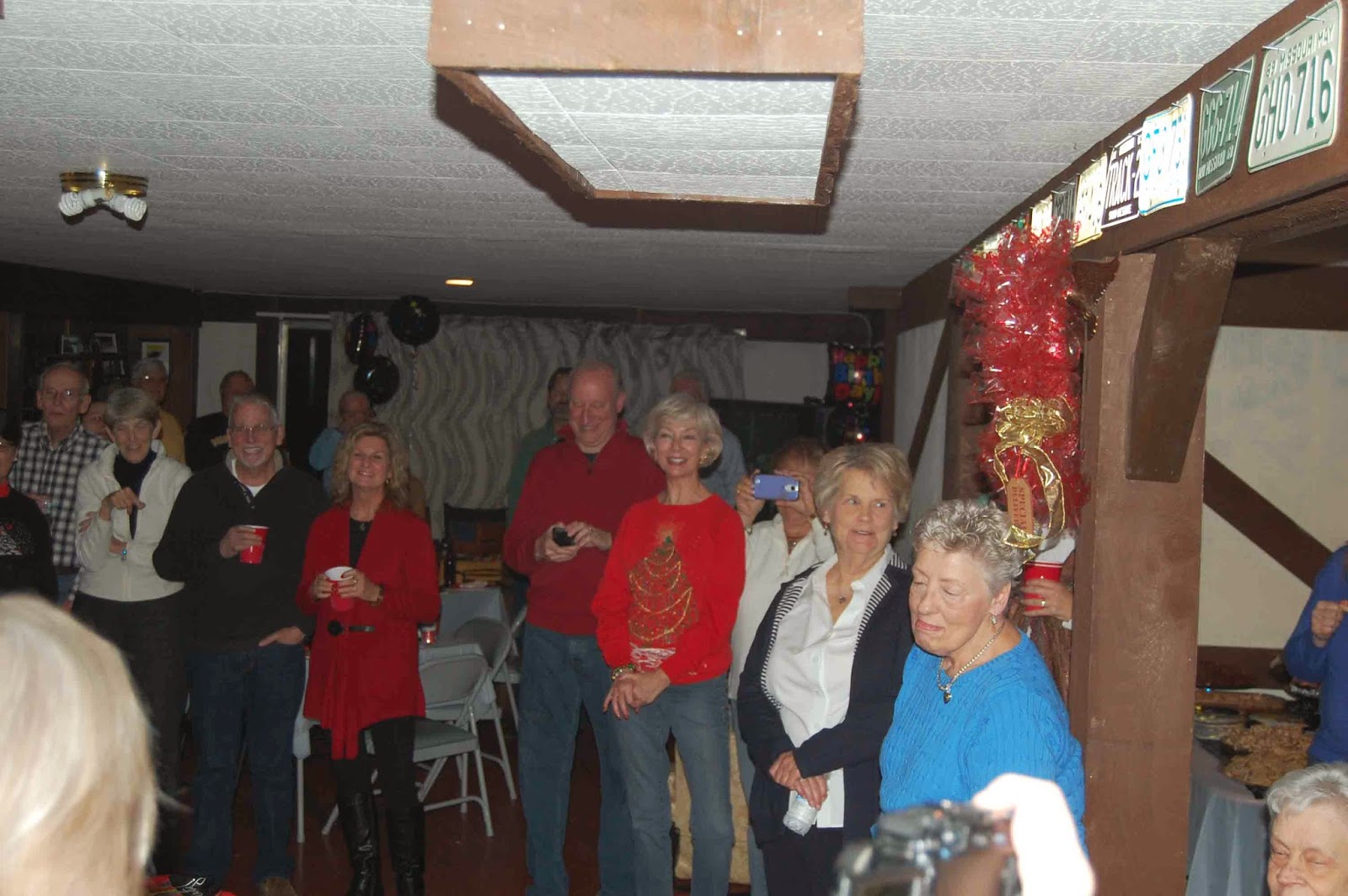 The rest of the night seems like a blur--talking to old friends and family members, chasing Patrick around and watch him eat every.single.thing. he could reach his fat little hands on from the tables.  I will note that I've been battling a sinus infection since late last week, so that definitely didn't help my 22-weeks-pregnant-I-already-feel-huge and now I'm sick state, but whatever.  I muscled through and loved Kate's party and seeing everyone there.  Enjoy a few pics below from it...and Kate, if you're reading this, we love you so much!  We are so glad "we got you!" and we'd do it again in a heartbeat just for you!  You deserve all of your gifties that you got and love you to the moon and back! 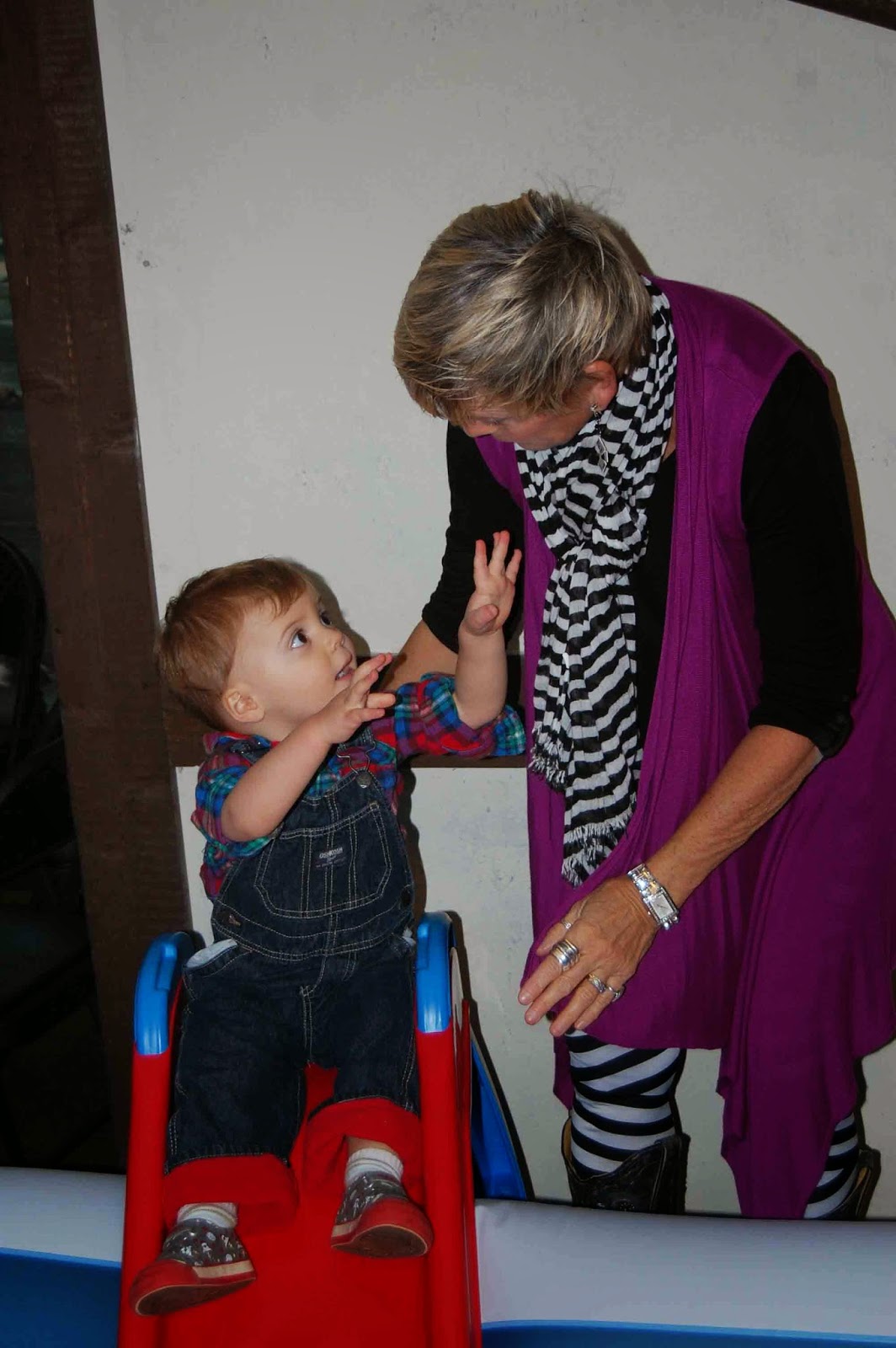 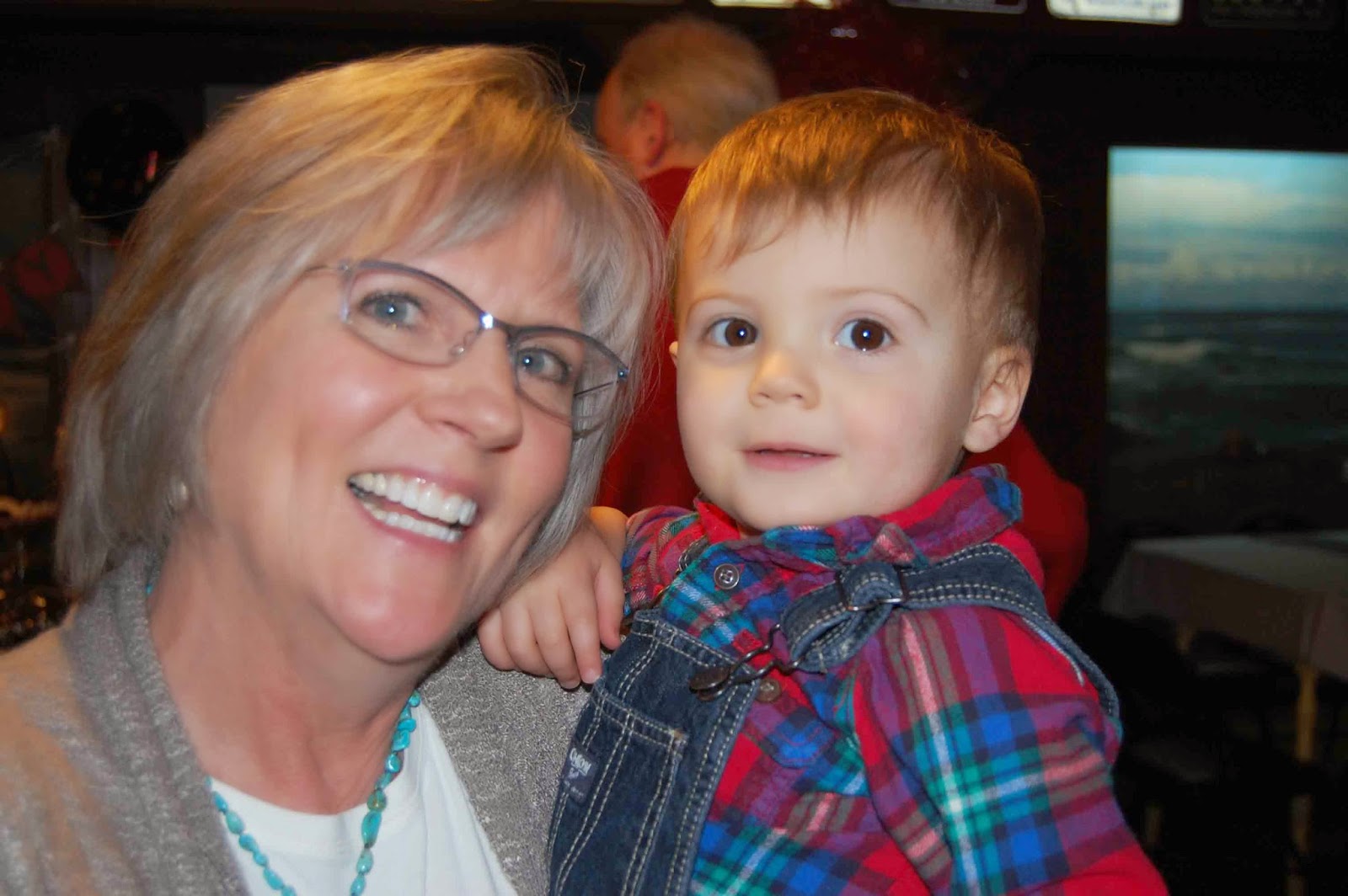 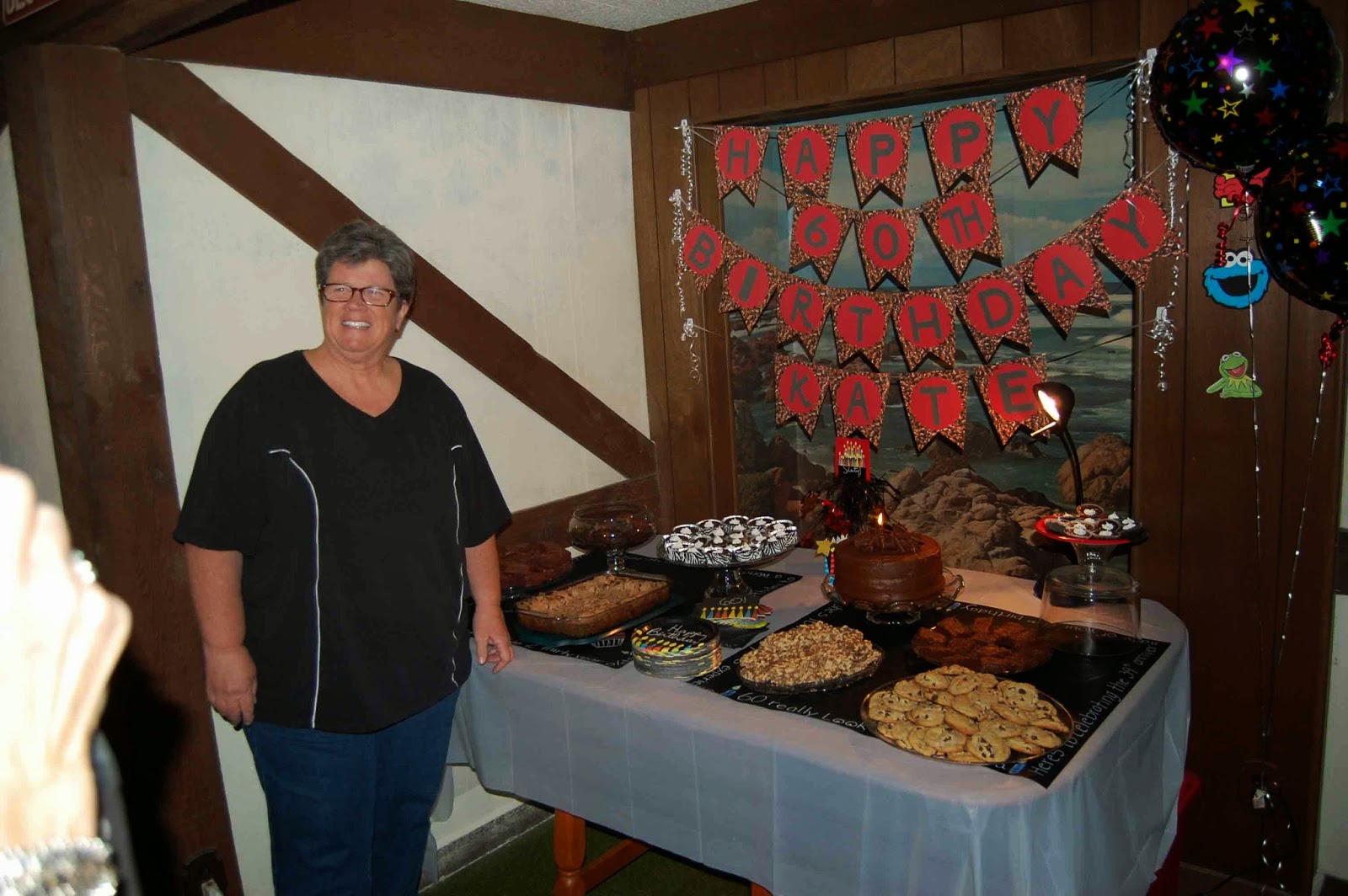 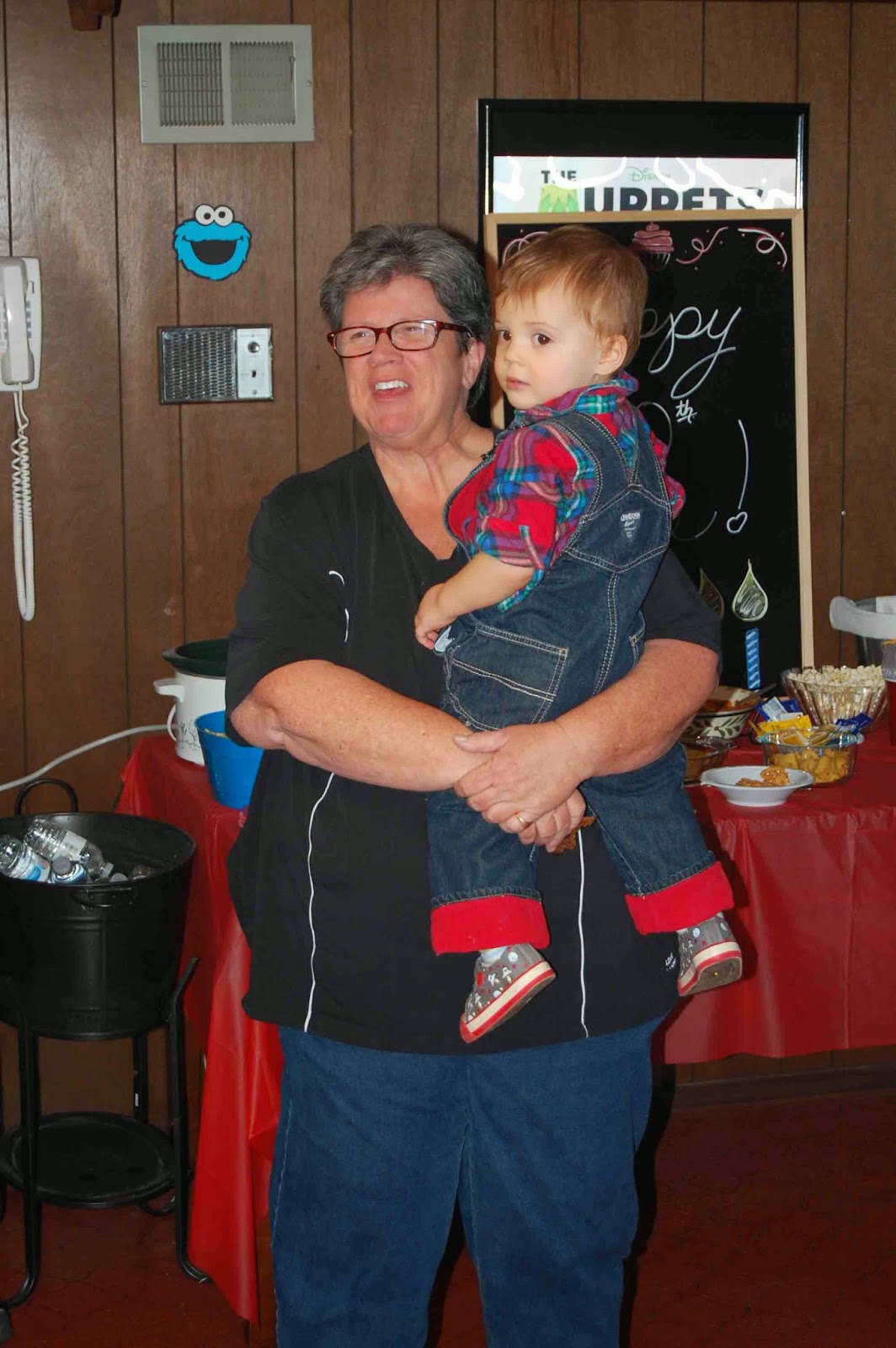 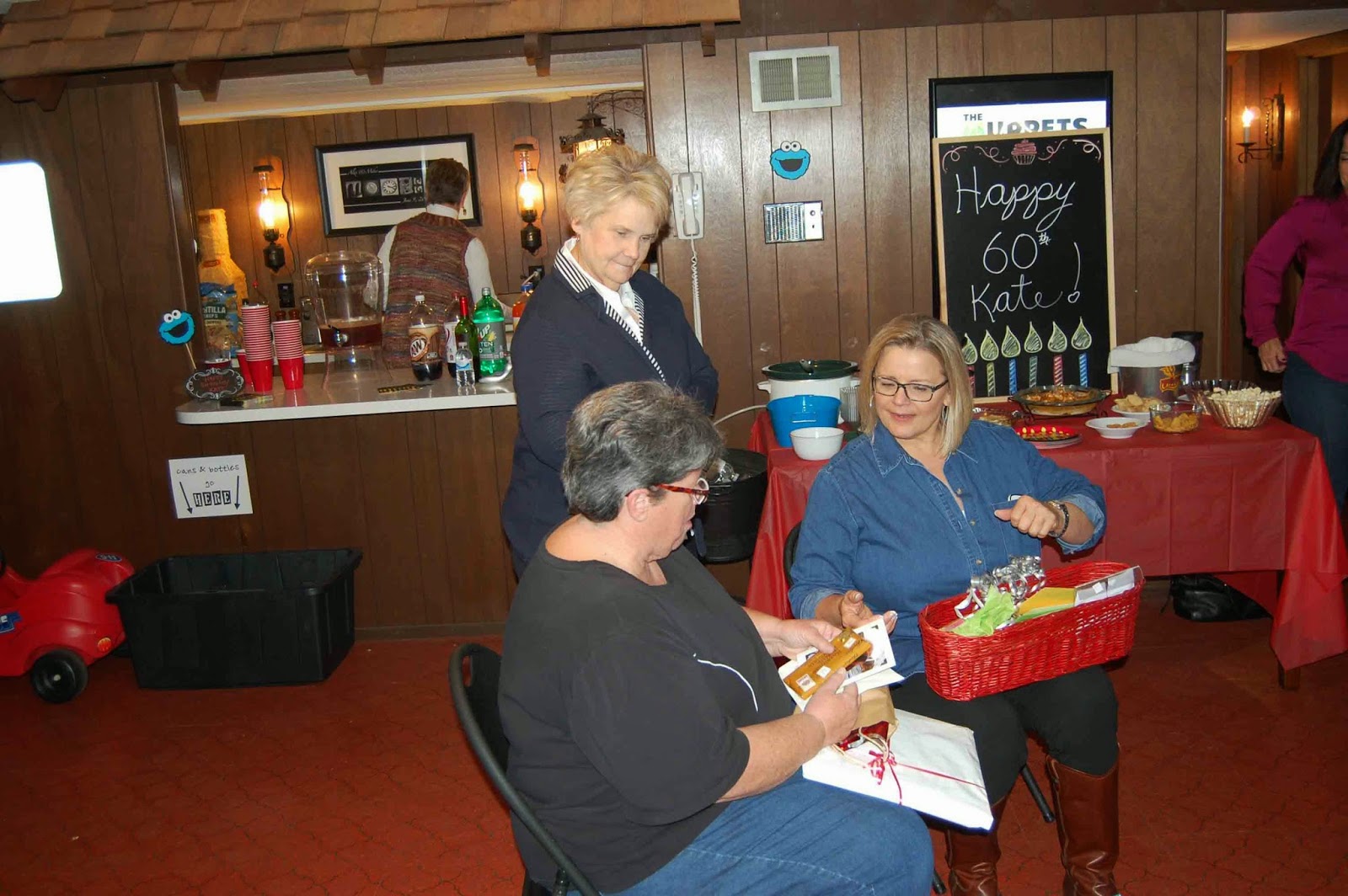 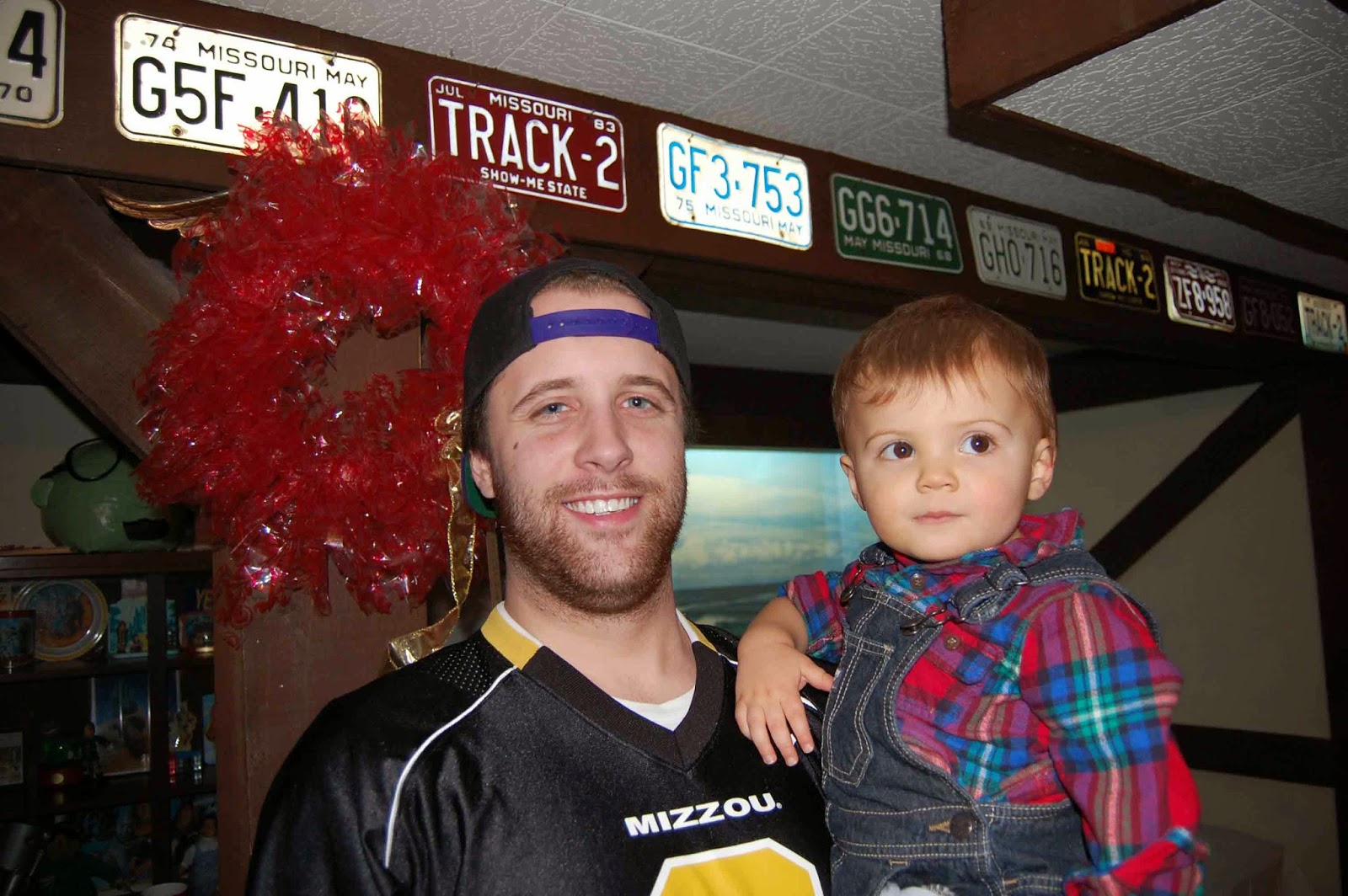 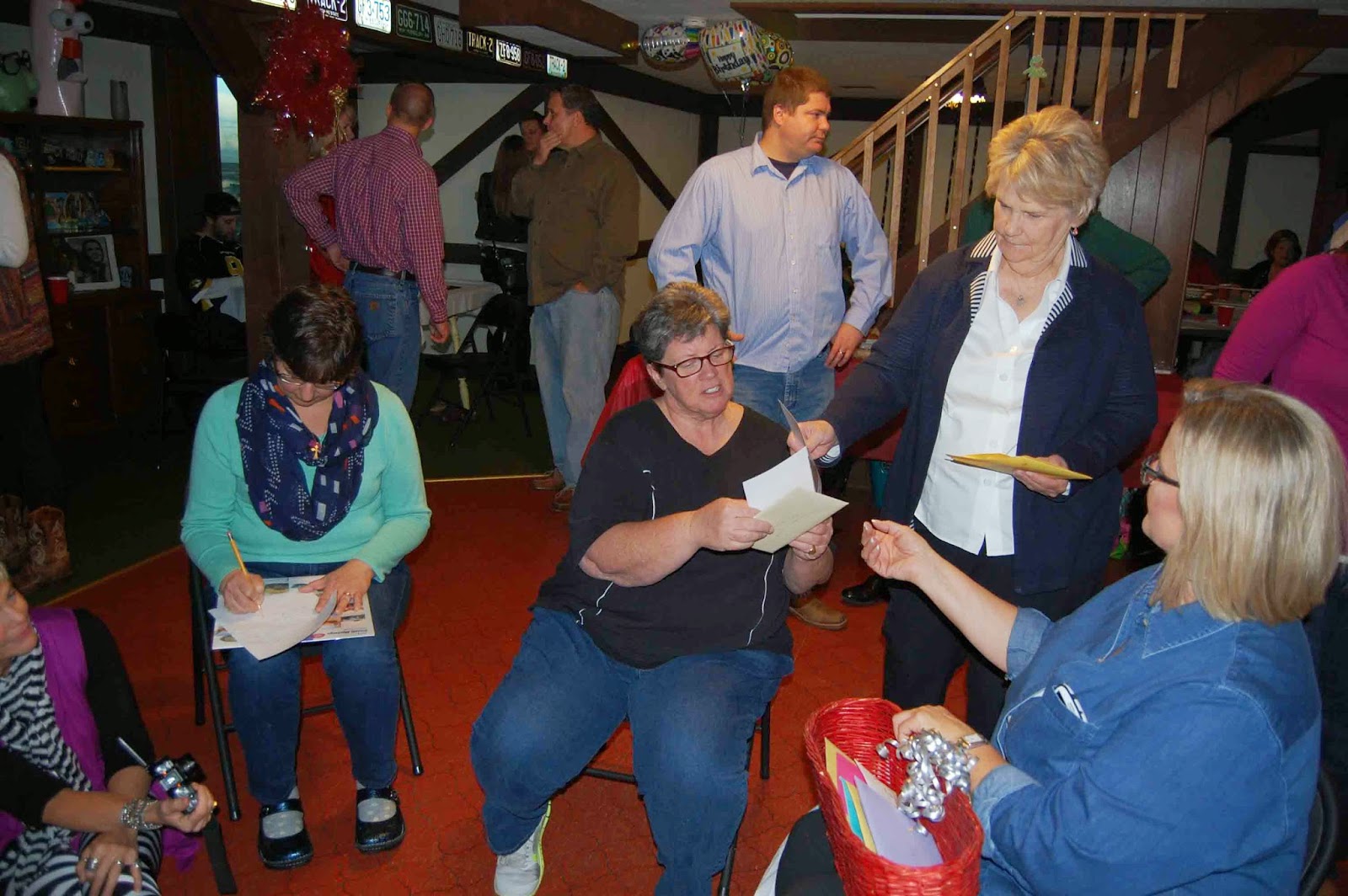 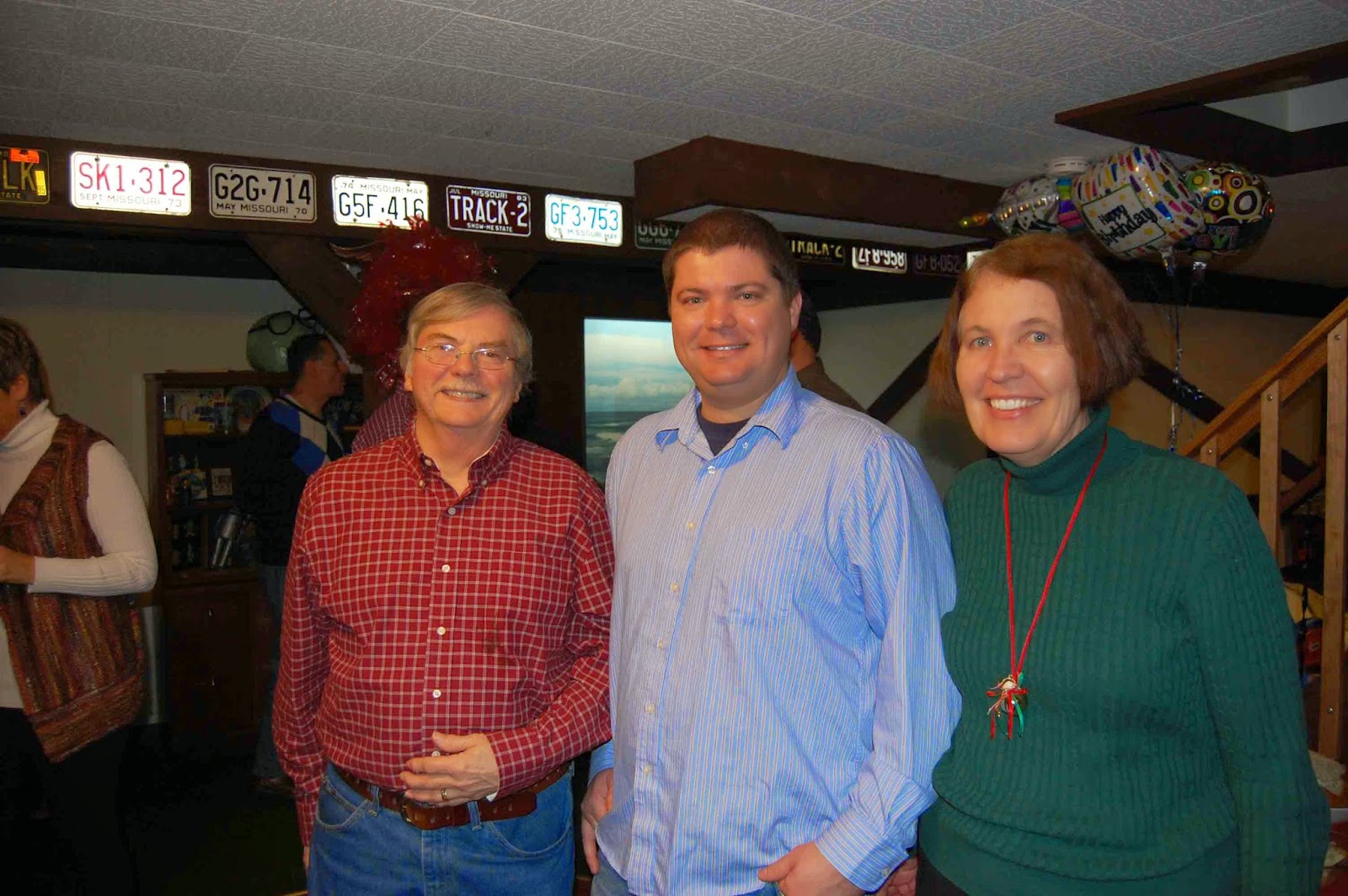 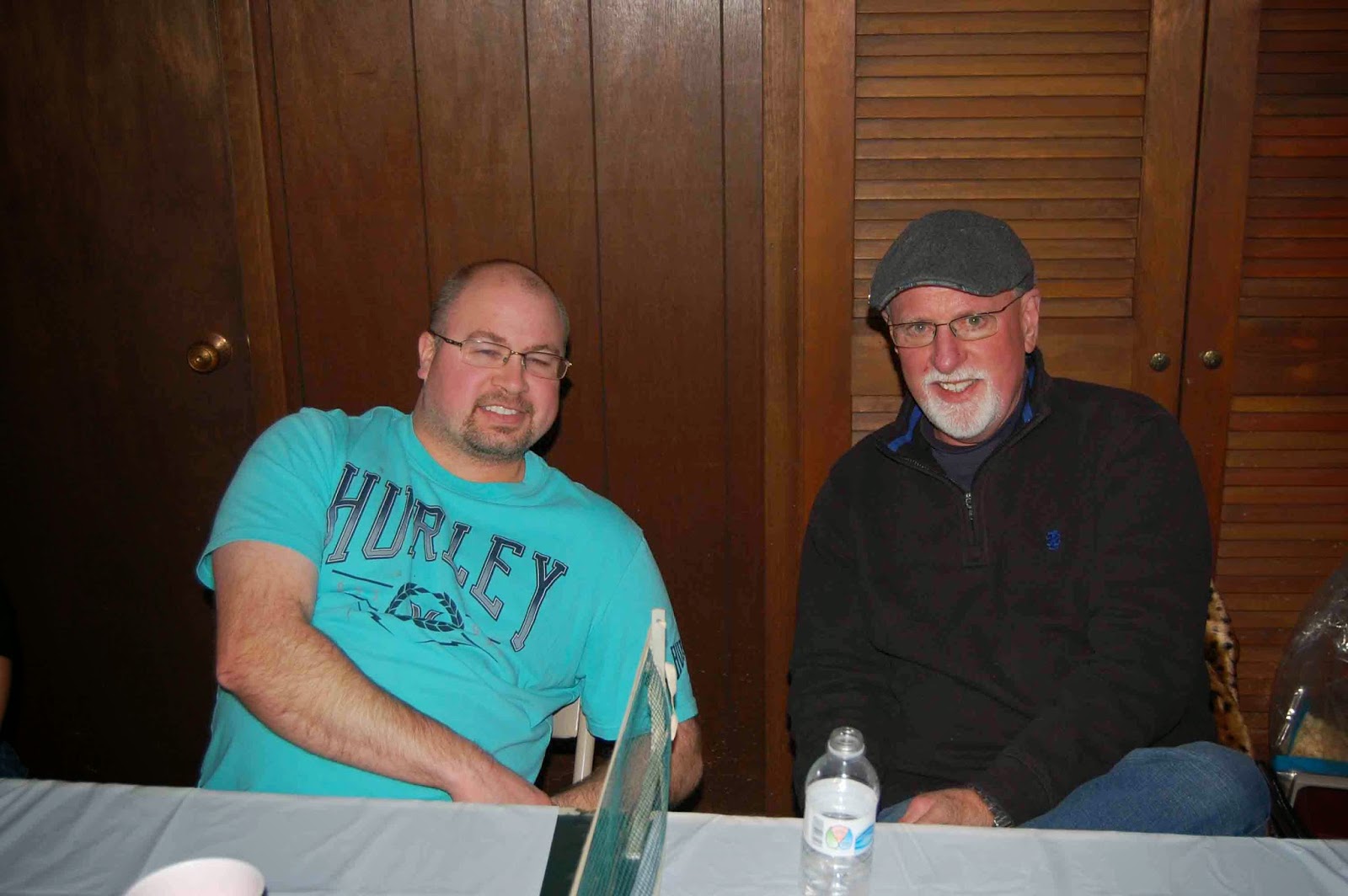 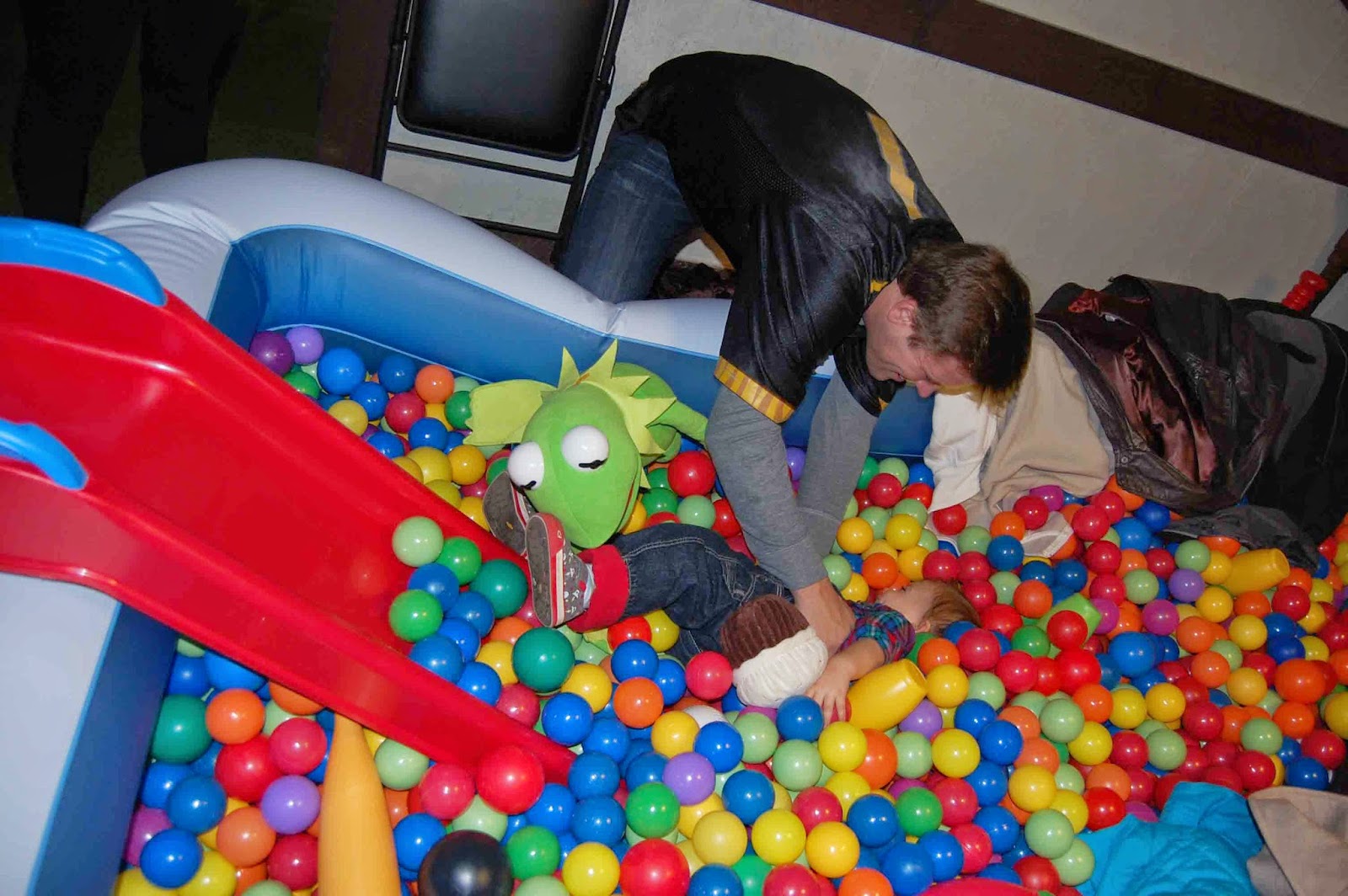 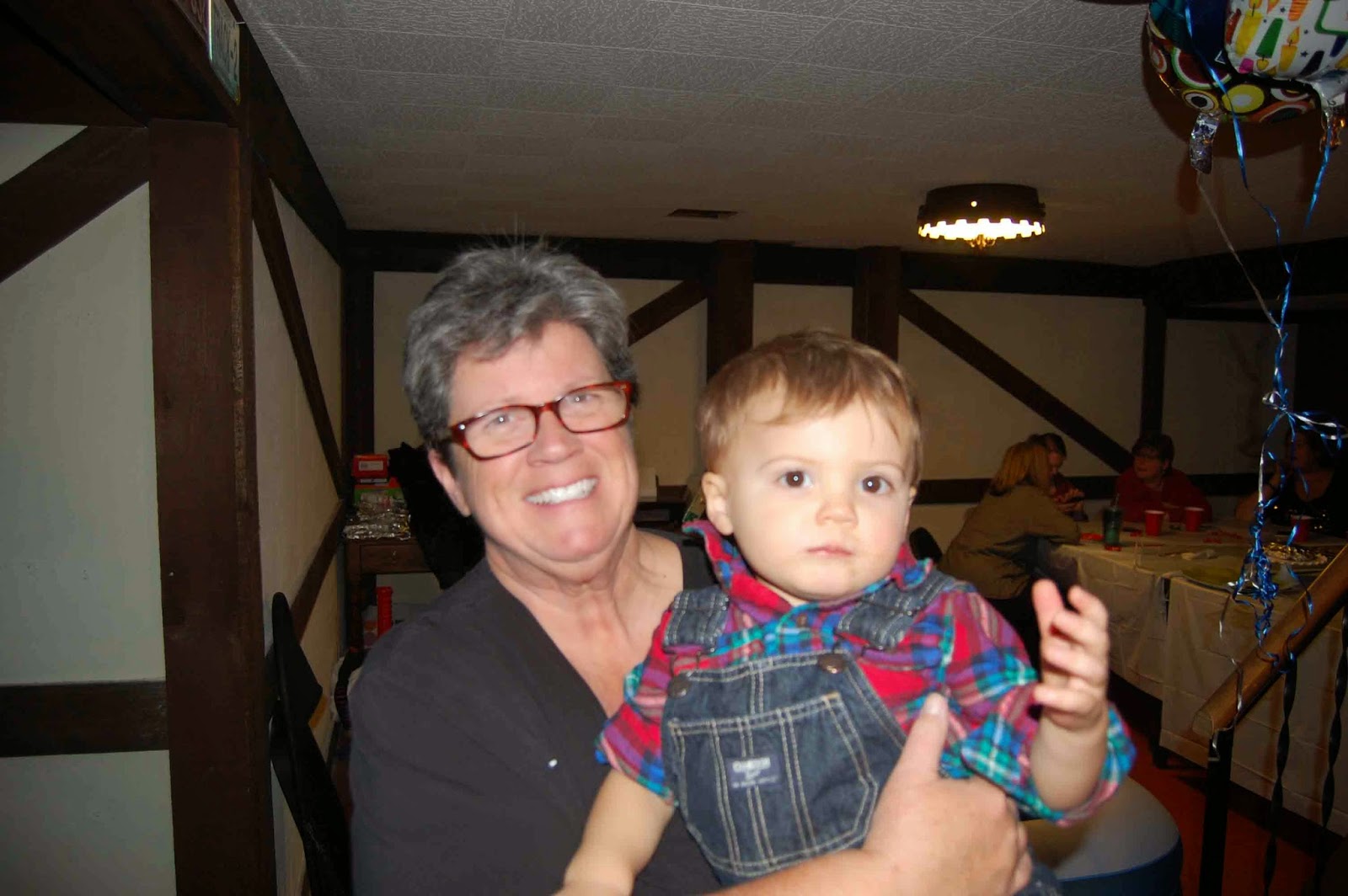 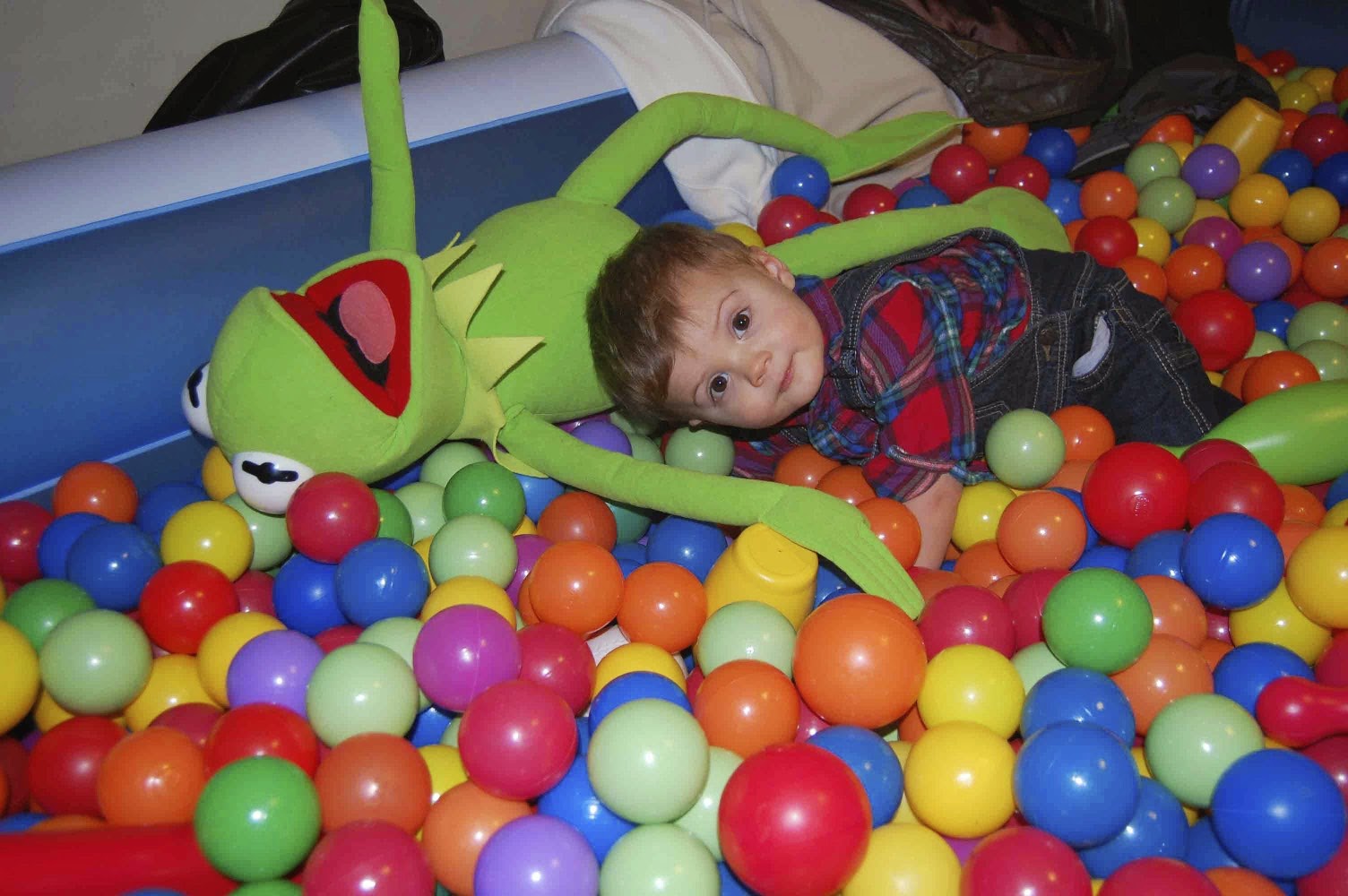 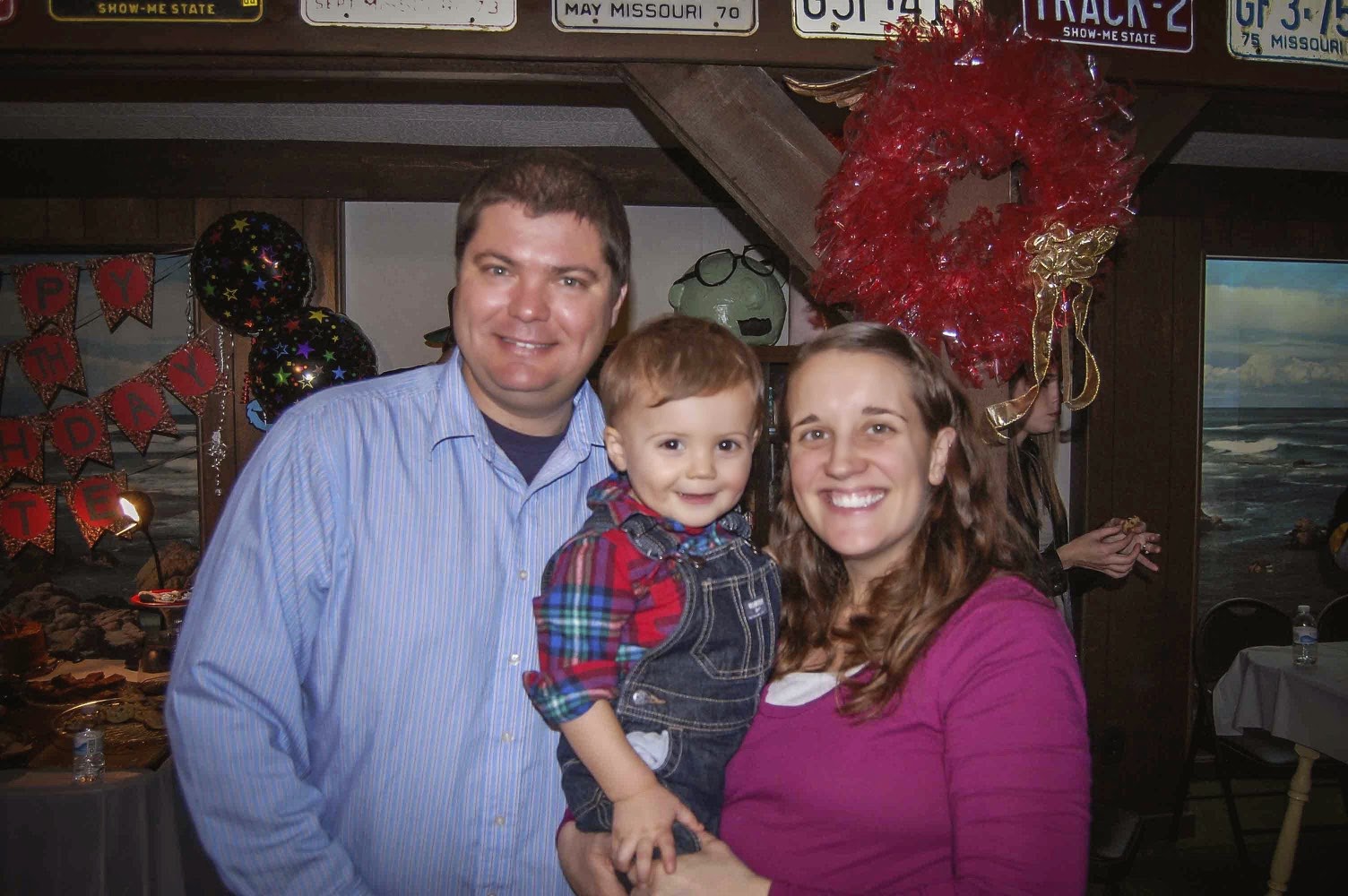 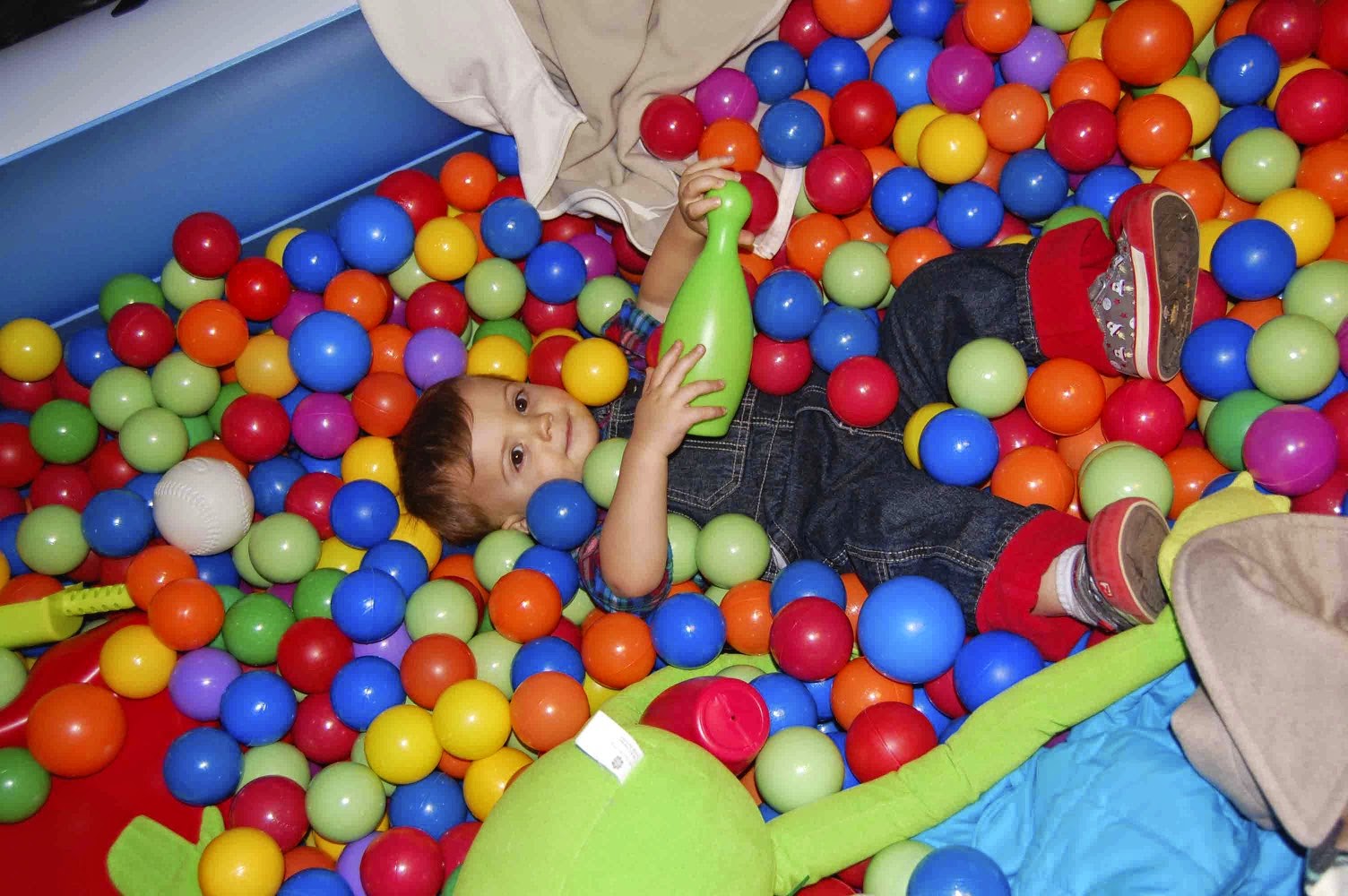 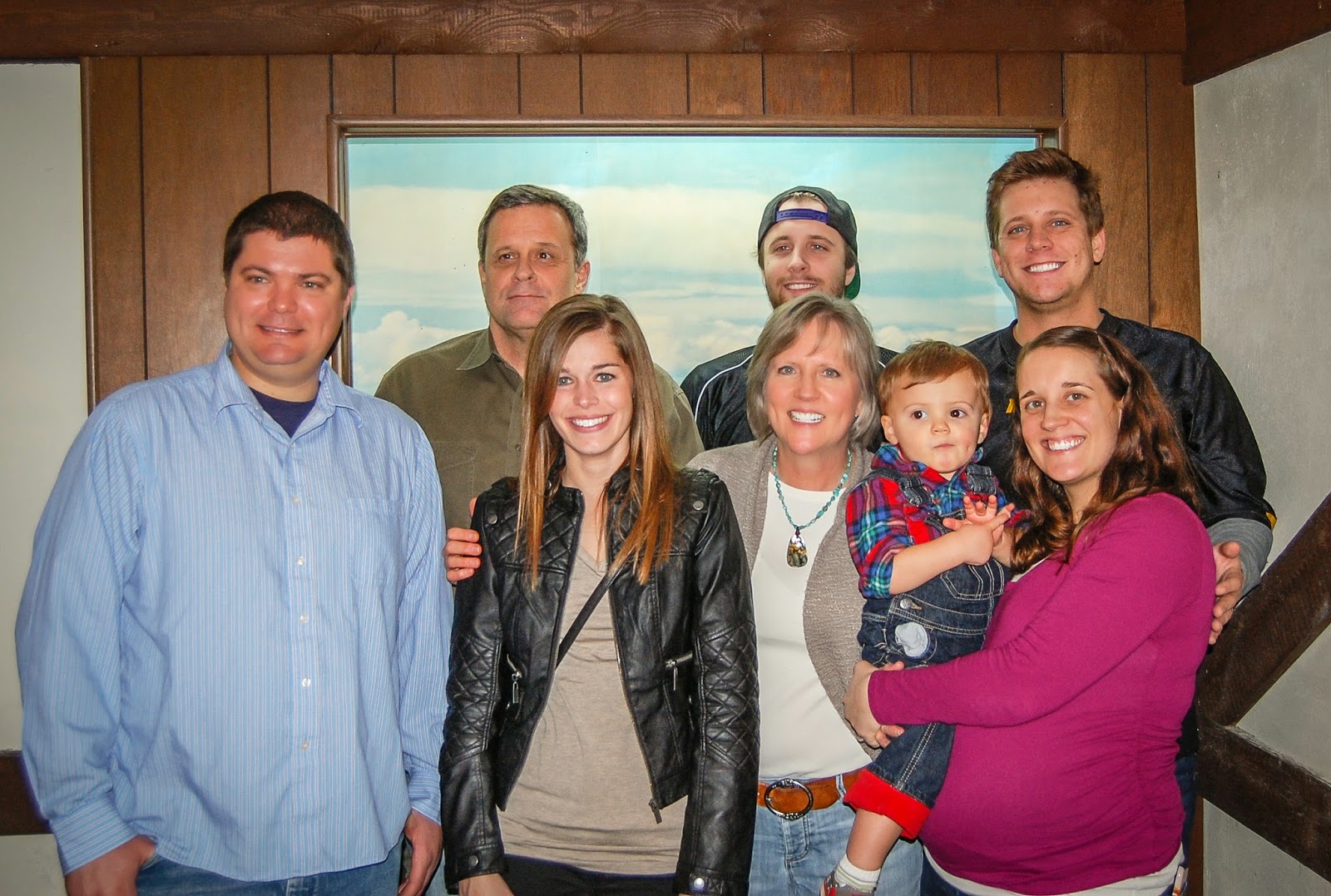