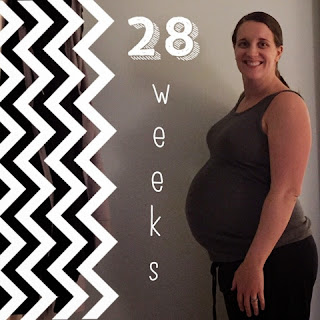 Helllllloooooo week 28!  I swear, this pregnancy is flying by.  I can't believe I only have a handful (okay, like 9) scheduled OB appointments left!  I've officially entered into the 2 week appointment window, and then before I know it I'll be going every week!  Crazy!

So this week started off with me going back to work, after feeling like I had months off (not really, like 3 weeks).  Despite how oh-so-early my 6:45am alarm felt on Monday, this was me: 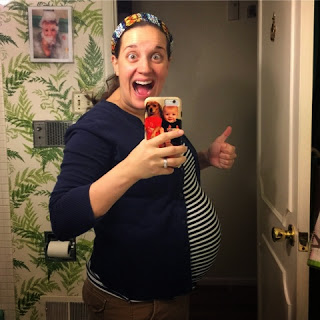 Yup.  I was feelin' good, ready to tackle my last 10.5 weeks of work (12 weeks till c-section day), and looking very chipper once I got my bowl of Honey Nut Chex in me.

I still am feeling really good--a lot better than I remember feeling at 28 weeks with Patrick.  Things haven't been too terribly uncomfortable to do yet (although I'm sure that's right around the corner) and I seem to be stowing all of the weight I've packed on (about 20lbs thus far) in my belly.  Things are going well--I hope they continue this way!

I had my 27 week checkup and glucose test earlier this week as well.  My tummy is only measuring 1 week ahead at this point, so for all the "gahhhhh! she's hugeeeeee!!" observers out there, I'm not that much bigger than I actually should be at this point, so shove it.  #2's heartbeat was thumpin' away nice and strong in the high 150s and everything else looked good!  (I'm still thinking it's a girl, despite the baking soda pee test I did, as put up to doing by my friend Courtney, pointed to boy)  Like I said earlier, I also had my gestational diabetes/glucose test as well with this appointment.  I do want to point out that I LOVE the drink for this test--I loved it when I had to do it with Patrick, and I loved it even more (mmmmm, orange!) with #2. 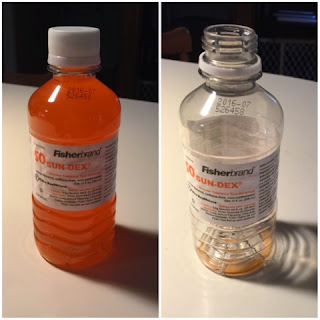 The results of my glucose test were not what I was wanting.  Yee haw.  I failed.  Boo hiss.  You need a 130 or lower and I scored a 138, so not crazy "high" but still more than 130, so that means I failed.  I.AM.NOT.HAPPY.  And for some reason I felt like I knew this was going to happen.  I said to multiple friends the day of the test I was really hoping I'd pass and they all reassured me that I would, but something told me I wasn't going to--listen to your gut, right?!!  Turns out it was right.  It probably didn't help that literally 2 hours before the "cut-off" to eat or drink anything I had my lunch: PB&J, cheez-its, an apple, and like 7 cookies.  Woops.  Anyways, so yee haw, I get to do the 3 hour test tomorrow morning.  GREATTTTTTT.  I am really really hoping I pass this one (which, hopefully I will...I saw some stat that 85% of women who fail the 1 hour one pass the 3 hour one...and that some doc's offices consider 140 or lower "passing" while others say 130...so sheesh.  I guess I'm on the cusp) because having to modify my diet for the next 11ish weeks is going to be hell.  Please pray for a passing test and sugar numbers for me!

So that's about all I've got for week 28!  Apparently some say the third trimester starts at week 27, others say week 28...well, now I'm officially--according to either trimester school of thought!--in my third trimester!  Woo hoo!  A little over 11 weeks until we meet this new baby!  I.AM.SO.EXCITED.  Until week 29, adios!
Email Post
Labels: 28 weeks baby #2 baby Mooney documenting the bump pregnancy