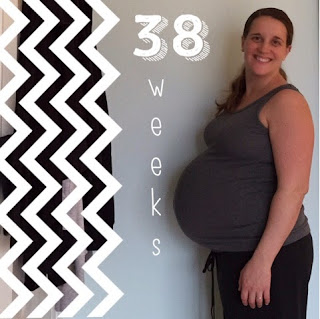 HOLY TOELDO FOLKS.  We're almost in the single digit days countdown!  I officially have 4 days left of school, and a week from Monday, #2 will be making his/her debut!  I cannot believe how fast this pregnancy has gone.  Seriously.  I feel like it was just yesterday I was posting about how we were expecting #2 and now it's ALMOST GO TIME.  Crazy how fast it goes.  JUST CRAZY.

Anyways, I had my 37.5 week check up at my OB on Monday, and all is lookin' good with #2!  Heart rate was in the high 150s, and my belly took a jump (measured 39 weeks last week at 36.5 weeks)--is measuring at 41+ weeks now!  HOLY COW!  I mean, I have felt like it had definitely gotten bigger from last week even--most of my maternity shirts are just too short and the bottom of my belly hangs out ALL THE TIME unless I'm constantly hiking them down...so yay, that's fun.  And I've definitely been rockin' the same two tops seemingly all the time because they're the only two that really fit right now.  But I refuse to buy any more clothes because a $15 top for a week and a half of use is just not worth it to me, so wash, wear, repeat every.single.day. 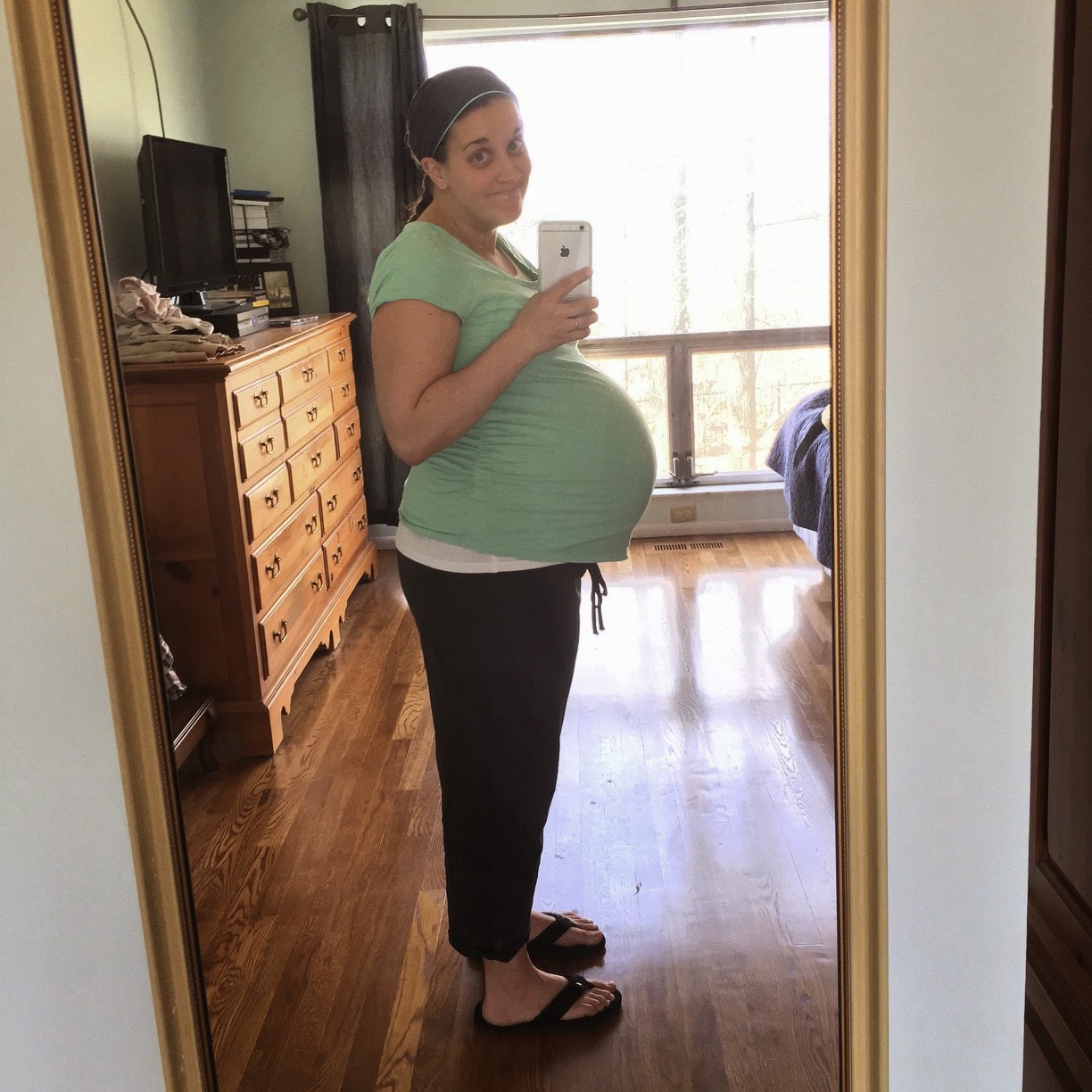 As far as how I'm feeling, I'd say pretty darn good for 38 weeks!  After an eventful spring break last week that kept me oh-so-busy and moving, it was kind of nice (kind of! sheesh! lay off!  I'd still rather be on the couch!) to get back into the school routine this week...especially since I've confined myself to my rolly chair and any tech needs I'm begging them to come to me rather than vice versa.

Mike and I spent a'many minutes in the great name debate this past week.  I *think* we've settled on a name for both a boy and a girl, but I've thought that before and we've gone back on those too...so, we'll see.  Chances are it'll be a game-time decision when he/she comes out and we'll decide then, so stay tuned for that :) 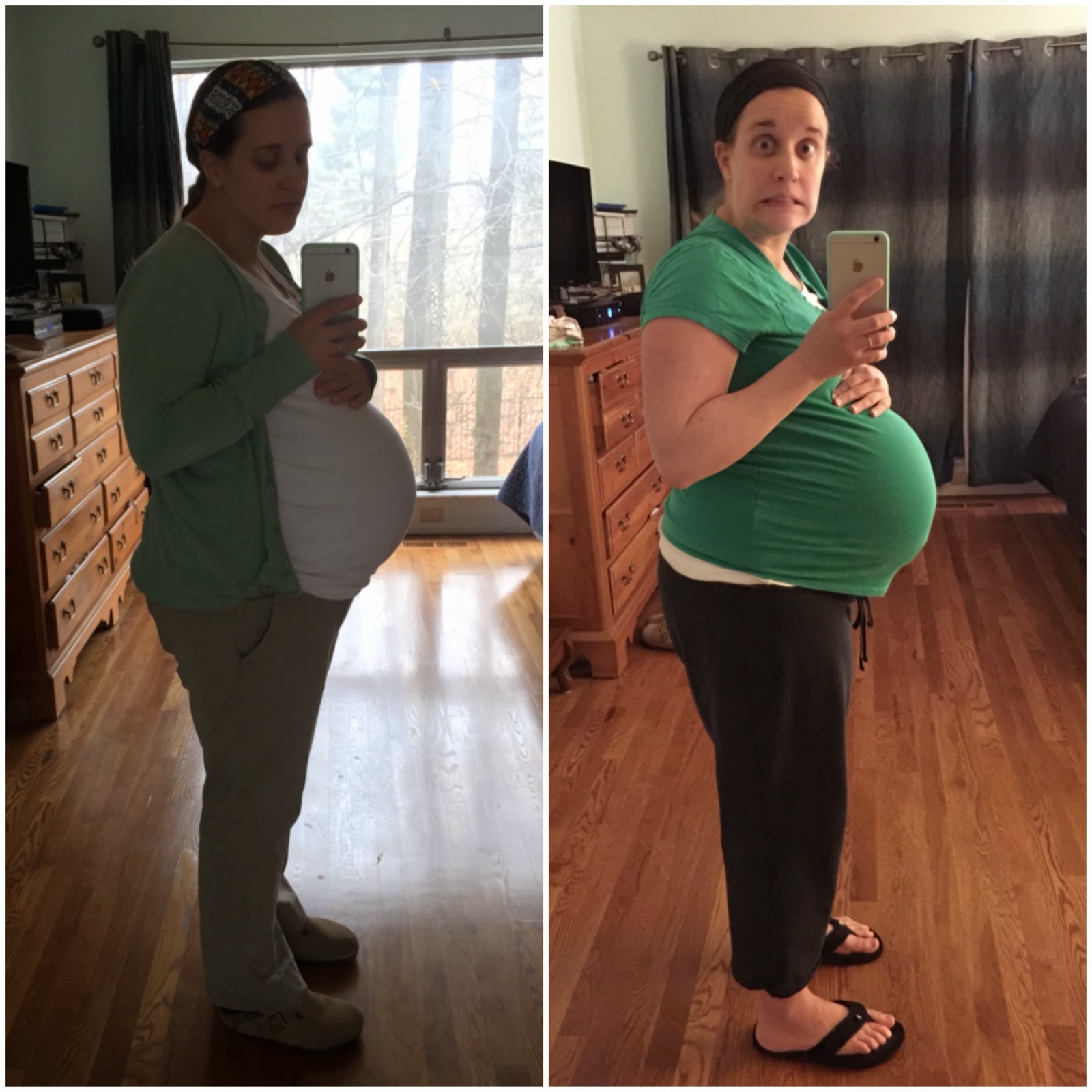 I totally text my friends Tiff and Lauren this pic on Tuesday night with "OMG I think this kid has dropped!" -- because sheesh, Tuesday night was ROUGH.  No contractions or anything like that, but tons of pressure down south and the feeling that I needed to pee every time I stood up.  I wasn't expecting anything to happen (and it didn't!), but I still wanted to make note of it to my buddies just in case :)  I actually slept pretty darn good Tuesday night, and woke up Wednesday feeling better than I did Tuesday evening...so I wonder if the crazy storm we had in STL on Tuesday night had anything to do with how I was feeling.  Either way, I wanted to make note of it cause based on the pic above (on the left was 3pm Tuesday, on the right was 8pm Tuesday) it sure looks like babe has dropped a bit!  And I think my ankles and feet would agree as well--yesterday they were swollen for the first time EVER!  A little chair reclining and pedicure helped that, but still, wanted to note that this was the first extremity swelling (minus my fingers) that's happened with this pregnancy.

Other than that, that's about all I've got to report for week 38!  Sunday marks Mike's final shift (until 3 more weeks) of working evenings, and I'll be oh-so-happy to have him back in the evenings until #2 makes his/her debut.  For whatever reason, it seems like when he's gone in the evenings all hell seems to break lose on me.  Ha.  So I'll enjoy him being home for 3 weeks at night until I can start complaining again about him being back on nights again.  Until week 39--and my final weekly update (OMG)--adios friends!