First off, when I darted off my last blog post I had just gotten a text that a mama was in labor so I needed to go snap the birth!  Little Max arrived a couple hours later and it was just magical.  Births are my most favorite thing to snap and I am so honored I've been able to be a part of several in the past month.  I hope I have oodles more in the future...it is just incredible to experience that on the end of the lens. 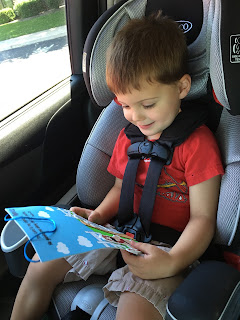 I mentioned earlier this week that Patrick was in VBS for the week, every morning from 9am - 12noon.  Monday's drop off, was, uh, interesting.  Tuesday through Thursday's just got worse.  He was a hysterical crying mess -- wouldn't let go of me, screamed and cried, and the VBS director literally had to pry him off of me for him to go.  HOT MESS.  Fortunately when I picked him up he was happy as can be and told me all about his day.  However, as soon as he got home he was adamant about not wanting to go the next day and started crying again.  What.the.heck.  This was completely new territory for me (and him!) and my guess is because he was 1. jealous that Rosie got to stay home with me all day solo 2. he's never been to anything organized like this before away from family, so that was scary 3. he's been protesting nap and hasn't had one in like a week (although he still has 2 hours of quiet time regardless).  Anyways, it was an experience nonetheless. 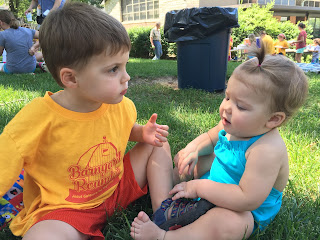 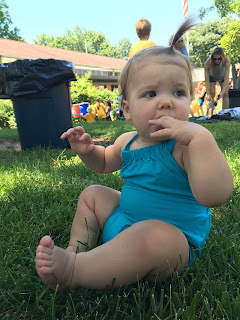 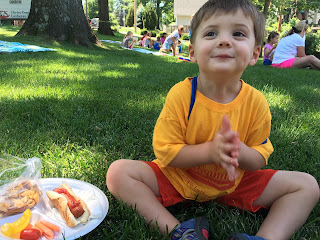 This morning however he told me he was excited to go to VBS because it was his last day and he didn't cry or anything at dropoff!  WOO HOO!  Progress!  He enjoyed telling me about his friends at the picnic lunch with Ro afterwards too.

BUT!  Another crazy thing: Kate came to take him to the lake for the weekend after VBS and he threw a complete fit -- not wanting to go with her (even though 5 minutes earlier he was talking about going swimming at KiKi's lake this weekend!) or anything.  WOW.  I really think he's got some serious separation anxiety going on lately (which is new ground for him and us!) and maybe some jealously that Rosie gets to be with mom all the time and not him.  Anyways, he ended up going with Kate, despite hysterical tears and screams, and ended up calming down not too long after we parted ways.  I'm sure he's gonna have a blast this weekend, and this was just a little hiccup, but if he continues to be homesick I'll go get him.  I really hope this is just a phase for him with a lot of 'newness' setting in, and he'll eventually get use to it.  I don't want to cave and give into his demands (like why I didn't just take him with me instead of leaving him screaming at VBS this week) because I don't want him to think that he can scream and cry and get out of anything he doesn't want to do.  Yes, he's 3 and young, but he's still gotta learn! 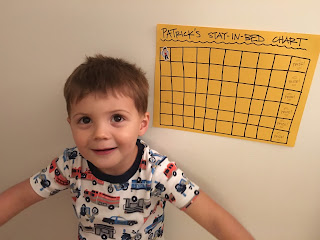 Speaking of learning, Patrick recently has been the master of stalling come nap/rest and bedtime, using every excuse in the book ("I've gotta poop! Come look at the sky! I want another hug! I need ice!") to delay going to bed and getting out of bed.  Seriously, bedtime has been taken upwards of an hour and mama here is tired come 8pm and there's no way I can handle this by myself next week when Mike's back on nights.  So!  We started a stay in bed chart and it's been going well thus far.  He gets a sticker for every time he goes to bed without asking to get up or get something.  Thus far he's 5/7 so not too shabby.  He has his setbacks but overall is doing well.  I just hope next week when Mike's gone in the evenings it goes well since I'll be by myself.  Pray for me. 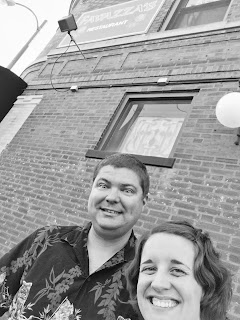 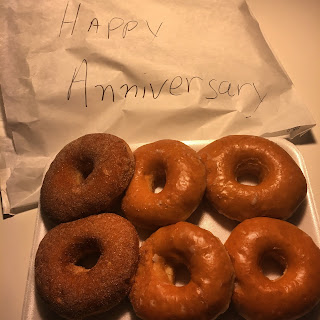 Yesterday was our 4th anniversary and it was wonderful.  Mike had to work but got up extra early to get donuts for me (!!!) and then when he got home he surprised me with a new shirt and tickets to see the Wizard of Oz at the MUNY next week.  We then ditched the kids at my parents and went to Favazza's for dinner -- which is the same place that served us dinner 4 years ago!  Our dinner was delicious and I'd be okay if we went back there again real soon.  I blogged a couple years ago all about our wedding day so if you'd like a stroll down memory lane go give that a read. 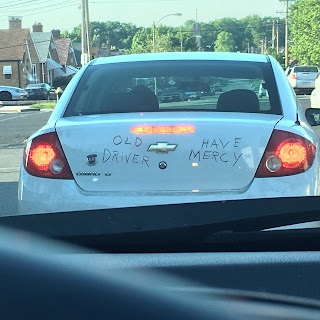 Oh, we also saw this gem ^^^ on the way home from dinner and I was dying.  Only in south city.  At least she's honest. 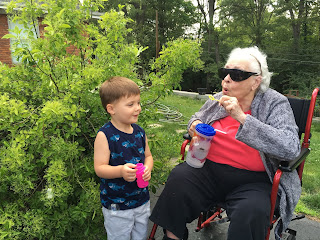 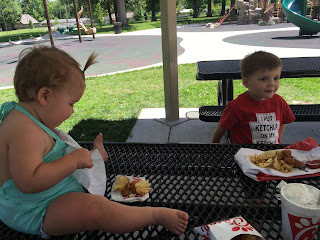 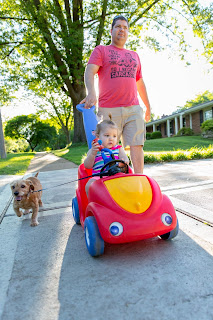 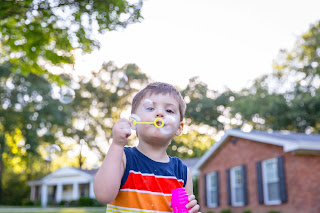 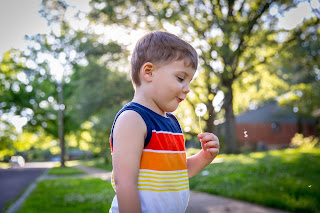 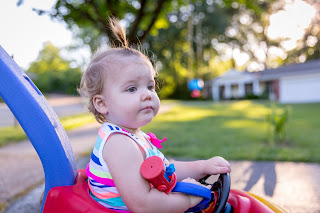 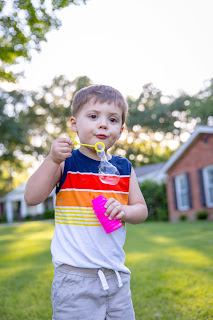 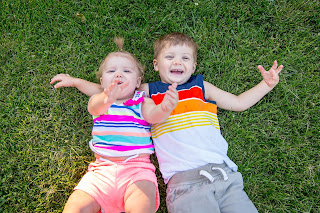 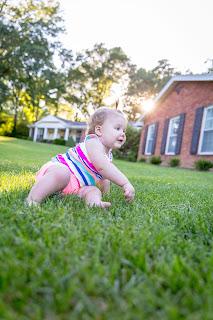 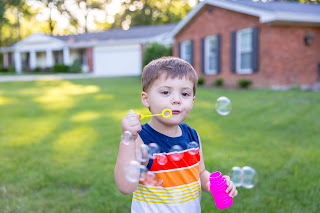 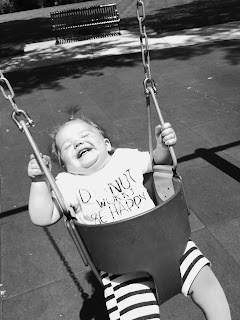 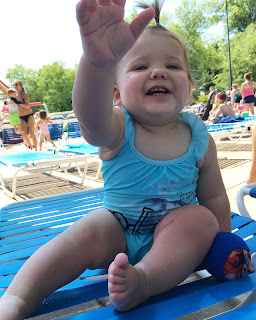 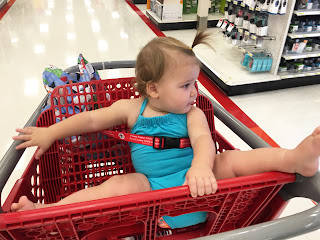 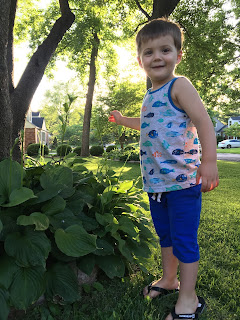 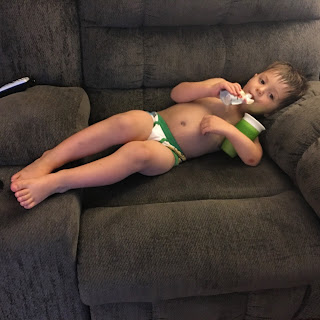 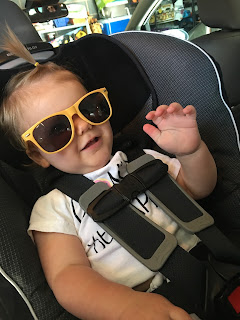 PHOTO DUMP.  #sorrynotsorry.  But this basically sums up our week, aside from VBS for Patrick.  Lots and lots of time outside, bubbles, park trips, walks, trips to Target, solo {Rosie} trips to the pool, visiting with Goose, and lots of relaxing.  We've done a whole lot and a whole lot of nothing this week and this is exactly what summer is made of.

It's been a wonderful first week of summer and I'm soaking it all in, savoring every minute, however crazy or chaotic it might be, and hoping it lasts forever and ever because it is simply the best.  These two kids are most definitely making this the best summer ever!

Okay, that's all I've got for today.  I have a couple photoshoots this weekend (I hope I don't melt!) and then next week is jam-packed with Cardinals games and more photoshoots and a friend's wedding and then leaving for family vacation!  EEKKKK!  I'm so excited!  Okay, I'm going to take advantage of this rare silence and go maybe take a quick siesta before Ro gets up and Mike gets home.  Later gators!
Email Post
Labels: best summer ever family family fun Patrick Rosie Scooter summer vacation bible school VBS what's happening