A few weeks ago on Tuesday, March 9th, we had a super nice early spring day on our hands.  The big three were at school, and Mike didn't work the night before, so he suggested we take Teddy to the Museum of Transportation for the morning.  I was like GENIUS! Excellent idea!  Then we can grab lunch too.

So we head out to the Museum and get there and DANG IT!  It's closed!  We were a week too early - it didn't open for it's weekday hours until the following week...still was only Thursday - Sunday.  Bummer.  Since it was such a nice day we decided to go to the little park nearby the Museum and let Ted run around and play before lunch.

I pull out of the Museum and onto Dougherty Ferry Road, where the speed limit is 45mph, and head to the park which was maybe a mile down the road.  There was zero cars around me, so I slowed down to a complete stop with my blinker on to turn left into the park.  There was a lot of traffic going the opposite direction, so I was just sitting waiting to turn...probably for a good 20 seconds or so.  I glance in my rearview mirror and see a Honda Civic barreling towards us, clearly not slowing down.  All I had time to do was grasp the steering wheel and take my foot off of the brake before BAM. 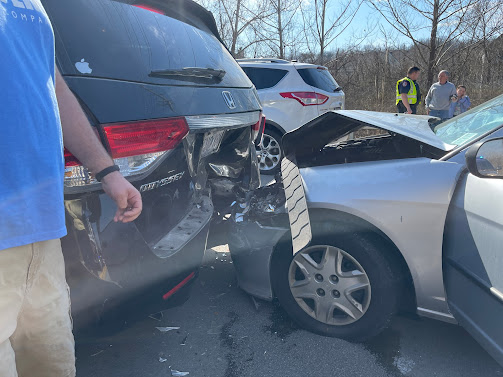 Teddy started screaming like mad in the back seat and Mike and I were just like OMG what just happened!  I was so worried about Teddy that he was hurt (he wasn't, I think it just scared him) that that's all my mind was focused on.  Mike grabbed his phone and called 911, I stayed in my seat because my neck and shoulders kinda hurt.

Once the police and ambulance got there we all got checked out and minus some whiplash (and later a sore arm), we were all fine, just shaken up. Our poor van though definitely was not.  The other drive and his passenger were also not hurt, just shaken up.  They were older, maybe 70s, and didn't speak English.  But fortunately they weren't hurt AND they had good insurance (thank you AAA), so that was a very silver lining in this crappy day.

We got the van home, made some calls to the insurance, secured a rental van, and were mild panicky about what we were going to do as we were suppose to leave for vacation DRIVING in a little over a week. ICK.

The tow truck came and took our van - and we would find out a few days later it was for good.  That poor girl was totaled.

The accident caused over $20,000 worth of damage and unfortunately that totaled it out.  It sucks because we got that bad boy only 5 years ago and I honestly thought we'd have that van for at least another 5 years!! UGH.

Once we got official word it was totaled, we began the very hurried scramble to get a new van.  I thought for sure we'd just get a new Honda Odyssey and be good to go.  Butttttt, Mike has always been intrigued by hybrids, and Toyota just came out (literally 3 months ago!) with their hybrid van...so we decided to take a look.  I totally went to the test drive thinking I was humoring Mike and we'd go to the Honda dealer to get a new one there...but once we test drove it, I was sold! That's the new van I wanted.

So after some crazy hurried money moving and shiftings, we bought this brand new blue girl just 3 days before we were going to put 2k+ miles on her driving down to Florida and back for vacay! 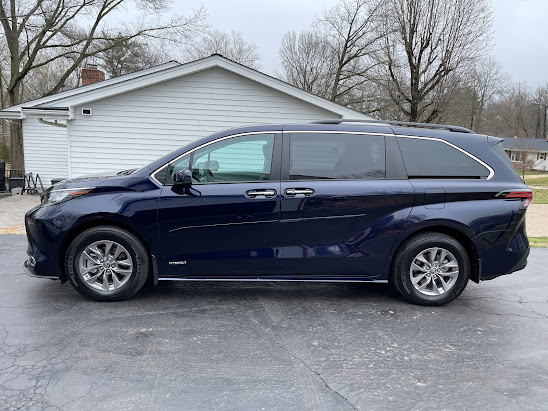 It sucks sucks SUCKKKKSSSS that our old van was totaled, but out of our control, and so thankful only the van was hurt and no persons were.  Since we had to get a new van and no choice, I am so loving having this brand new beauty (Apple car play! DVD system! remote start! WiFi!) and the kids are too.  It's sooooooo much more spacious inside than my Odyssey was - and, well, I just love it a lot. 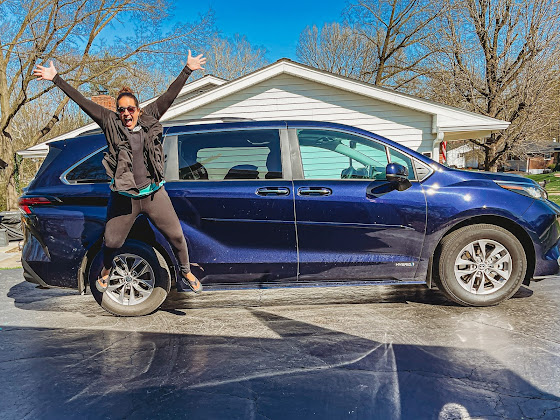 Moral of the story: drive safe, watch your surroundings, wear your seatbelts...and don't try and go to new parks after your original plans fall through ;-)