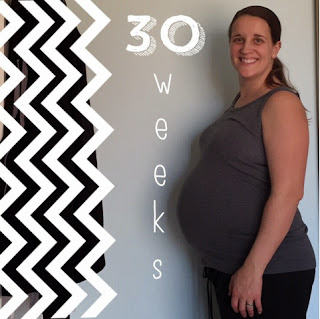 YEE HAW!  Made it to the 30s!  This kid is officially 3/4ths of the way cooked!  I feel like once you hit the 30 week mark your pregnancy flies by {even faster than it was before!}.  So, officially in the downhill stretch.

So this past week was interesting...I got a stomach bug late last week and OMG.  It knocked.me.down.  I spent the majority of two days in bed, eating nothing (which I KNOW means I'm sick when I don't want donuts or oreos or ice cream!), and chugging a lot of gatorade and water to make sure I stayed hydrated.  Luckily after about 36 hours the bug was gone and I was feeling better.  Thank the good Lord above.  But not a day after I was feeling better Patrick was woken up by Mike (cause he was still snoozing close to 10am!) and Mike discovered he puked in his bed in the middle of the night and it was on everything.  Ewwwww.  He also had seemed to come down with the same tummy bug I had, and was pretty uncharacteristically snuggly and not himself for a day.  Luckily his bug came and went within 24 hours for him.  Then, low and behold, a day or so after Patrick was all better Mike came down with it!  Same exact thing: feeling yucky, stomach issues outta both ends, and no appetite.  But, like the rest of us, Mike's seemed to only last a day or so and we are *hopefully* for now bug free.  Gosh, winter, you can go away and bring the niceness of spring instead.  I only like you for snow days and you've brought zero of those thus far.  Humph.

Anyways, so yeah, that was fun.  Having a stomach bug sucks, but sucks so much more when you have kids AND are pregnant.  Hopefully won't have to deal with that again. 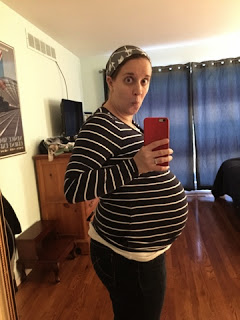 I had my 29 week check-up at the doc earlier this week and all looks good!  Babe is measuring right on at 29 weeks and his/her heartbeat was in the high 160s.  I definitely left my appointment even more convinced that this babe is a girl, just because we're getting late into the game here and bebe is measuring spot on week-wise for size and has a very high heart rate (Patrick always measured way big and late in the game his heart rate was always in the 130s, sometimes 140s).  Anyways, girl is still my guess. 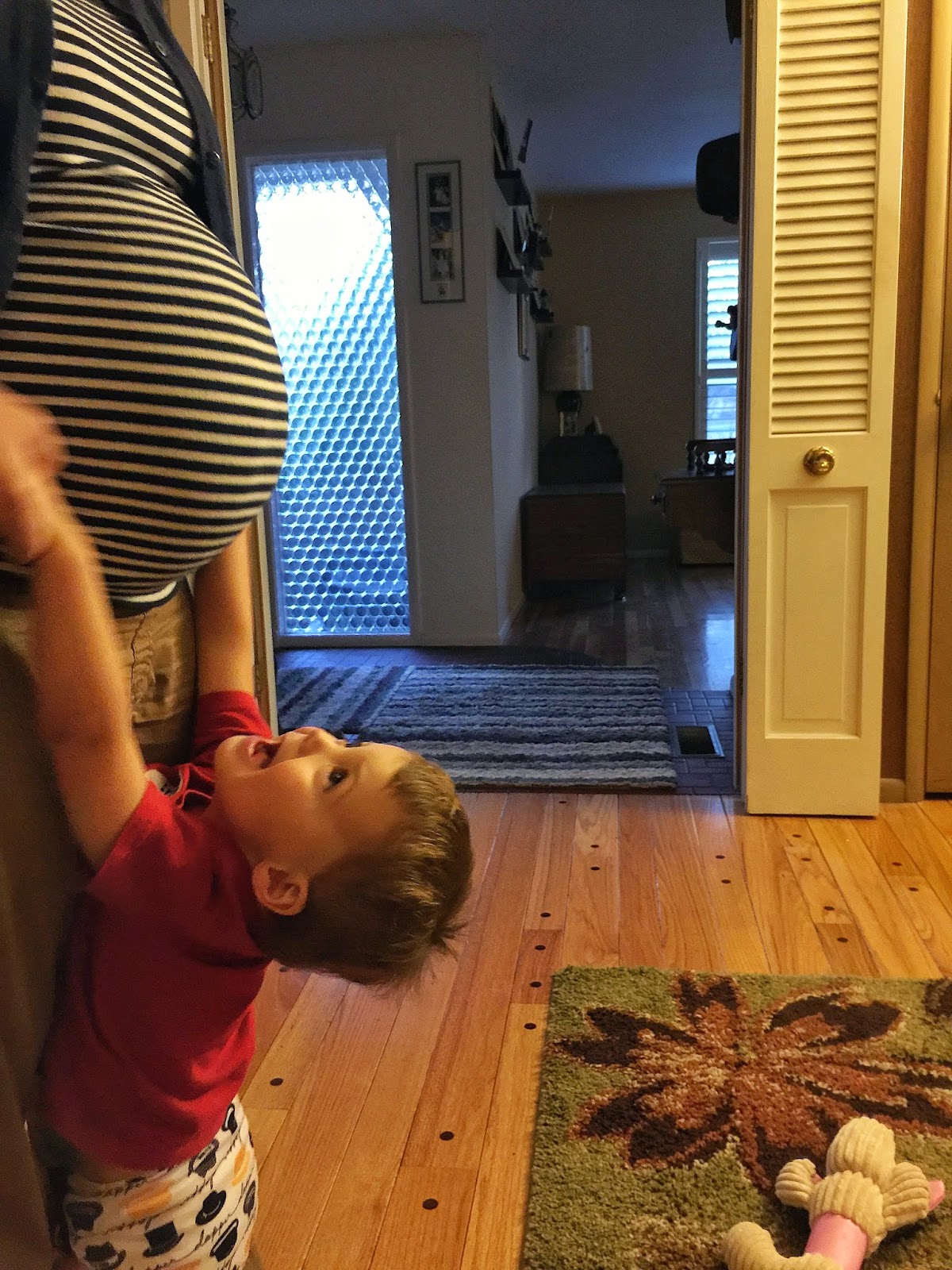 I just love this pic.  Mike snapped it of me and Patrick not knowing it and there's something about it I just really like.  Unintentionally great pic in my book: I like that it's off-center, it's only my tummy, and just shows how happy Patrick is.  I just love it.  Makes me smile!  I hope he keeps that same smile and love for his new sibling in a couple months!

Overall I'm still feeling really good!  I definitely notice some upper back pain when I'm standing/on my feet too long, but that's about ti.  I know by this point last time my lower back was absolutely killing me all the time, sitting or standing, so it's been nice to not have to really {yet???} deal with that.  AND, bonus, my wedding rings still fit!  I know it was week 30 or before that I had to shed them last time and go with my size up band Mike got me...well, my actual bands are going strong this time so I'm curious to see how long I can still fit them on my finger before they need to be retired.  And with that, I think I'm up about 30ish pounds thus far, which is fine by me.  I actually have 40+ pounds to gain IF I'm going to reach the weight I was when I delivered Patrick.  Ha!  I don't think I'll get there even if I tried--chasing Patrick around all the time seems to keep the poundage off this go'round.  Anyways, I'm sure that's one of the reasons I've been feeling so good as well.

So that's about all I've got for week 30.  Until week 31 folks, adios!
Email Post
Labels: 30 weeks baby #2 baby Mooney documenting the bump pregnancy