Okay, I have said this before, but I have a serious love-hate relationship with Mike's schedule, especially when he works evenings (3pm-11pm), like this week.  I love that he's home all day with Patrick, but hate, loathe, detest that I am flyin' solo in the evenings.  Thank the good Lord above this isn't permanent and it rotates every three weeks, but still, I find myself leading off this Friday blog post with this.

So since I'm on that topic, I'll divulge a bit: last night Patrick and I had a rare night at home, by ourselves, with zero plans.  After I picked him up from my mom's, we shared a Red Baron pizza for dinner, Patrick destroyed the basement, I had a Beggin' photoshoot with Scoots that was promptly interrupted by Patrick stealing the props, we watched (kind of) Frozen, Patrick got every toy out in the family room, Patrick chased Scooter, Patrick took a bath then had some milk, we read a story, and Patrick was in his crib by 7:59pm because I was E.X.H.A.U.S.T.E.D.  Holy moly.  I know he's a toddler and this is what they do, but being 7+ months pregnant and keeping up with him was hard work.  After he went to bed and I cleaned up his tornado, I sat on the couch and thought, "How am I ever going to do this by myself with a newborn and Hurricane Patrick?!"  I felt a wittle bit defeated--especially since I was flying solo and I know I'll be doing that forever to come (cause I'm sure the scheduling fairy won't ever change Mike's shifts) in three week rotations, even after #2 gets here.  Oyyyyy.  However, I made a promise to myself as I was sitting on the couch last night that I would ask for help--especially in those early months when #2 is tiny and demanding--when Mike's working and I'm flying solo...for both the kids' sanity and my own.  So family, if you're reading this, I'm getting my big girl panties on and gonna be asking you for help if I ever feel like I'm struggling managing this by myself.  And kudos to the single mamas (and/or daddies) out there who do the solo stuff 24/7.  You're saints, and have major street cred in my book.

Okay, whew, off of that mini-soliloquy, and YAY!  It's Friday!  And (whoa!) the end of January is tomorrow?!!  Where on earth did this month go?!  (And no snow days either--boo hiss).  Seriously, time is flying by, and we're in the single digit weeks countdown to meeting #2.  Craziness.

Anyways, so I'm totally pumped it's Friday, cause it's been a longggggg week.  Our entire house has been through a nasty stomach bug (and, fingers crossed, hopefully all over it), Mike is back working evenings so we don't see him at night, and I had my first Monday - Friday full week of school/work since early December.  Whoa.  Luckily we have a semi low-key weekend on tap: a 1st birthday party tomorrow and a Super Bowl diaper party on Sunday.  Mike has to work all weekend :( but at least I'll be home in the mornings and afternoons to see him before he departs.

I thought I'd leave off with some of my favorite highlights from this past (exhausting!) week:

Scooter, I know, is vastly overshadowed on here by his little brother.  My apologies.  Some Scooter lovin' for ya, in the form of we have a ton of dachshund toys that all eerily resemble Scoots in some way or the other. 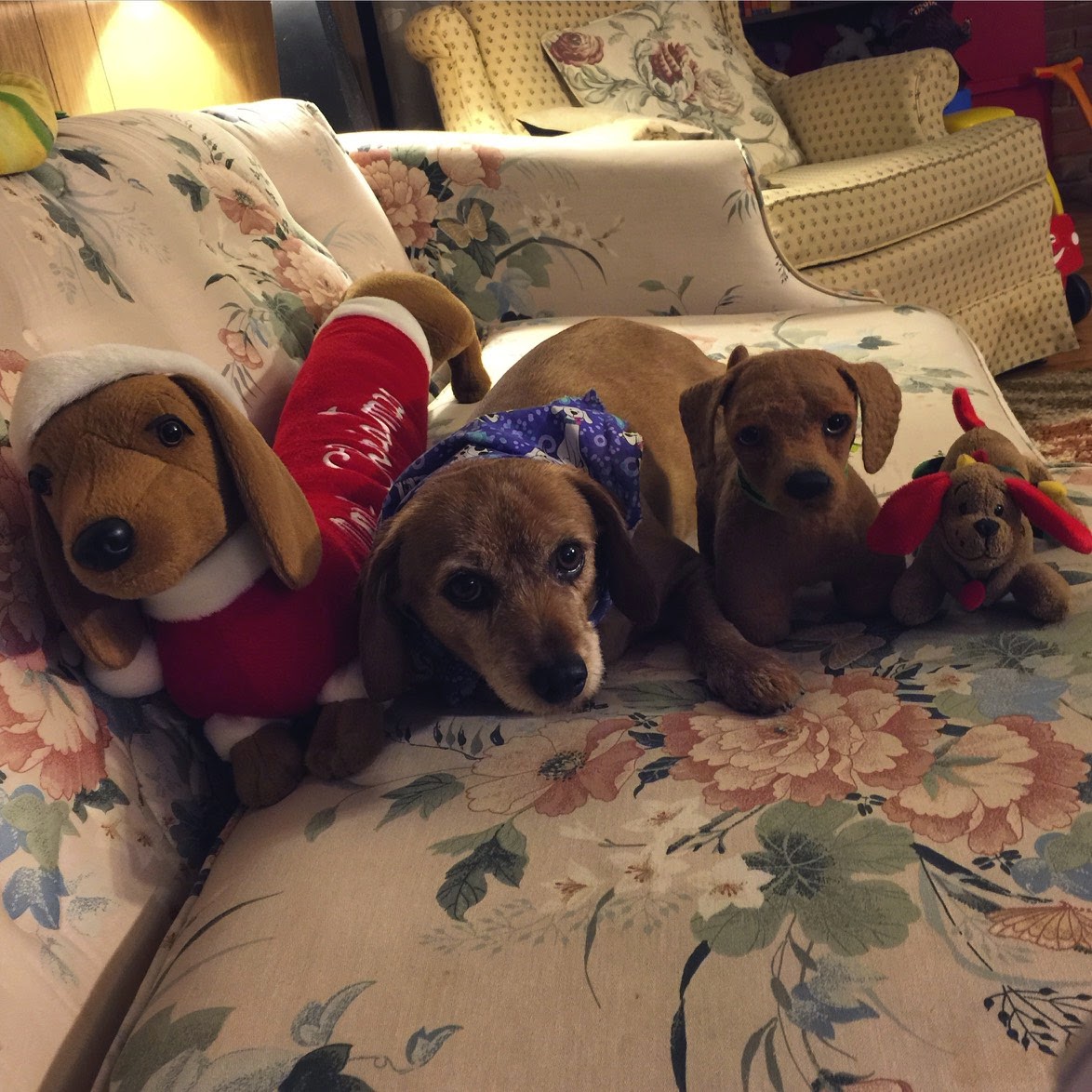 Here's just a picture of Scooter looking dashing, and daydreaming about squirrel and bunny-chasing, I'm sure. 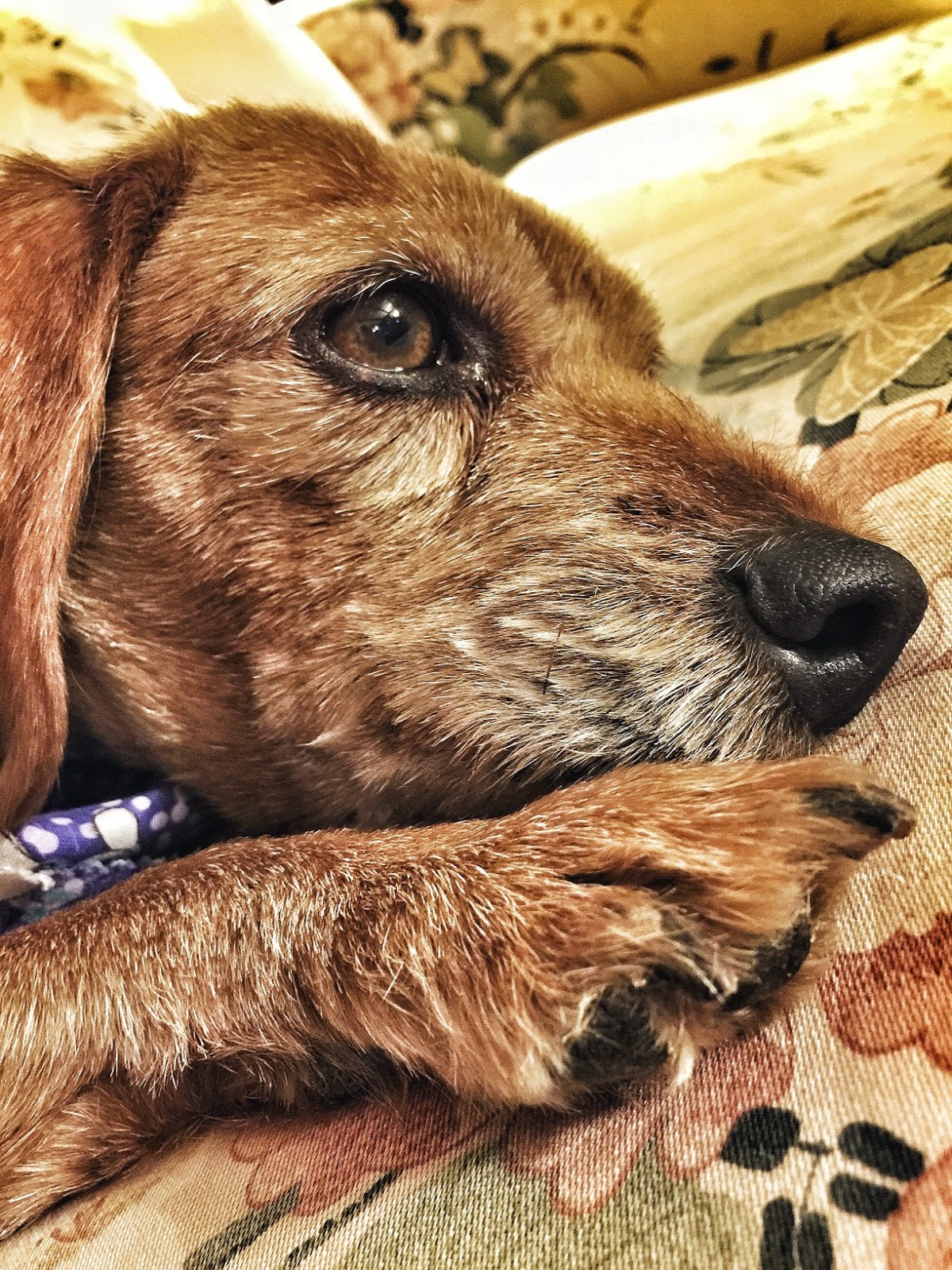 And Scoots is getting majorly excited for his big weekend coming up: the annual Beggin' Pet Parade in Soulard!  We snapped some pics recently to blast out on his social media accounts to get people hyped up for the big parade. 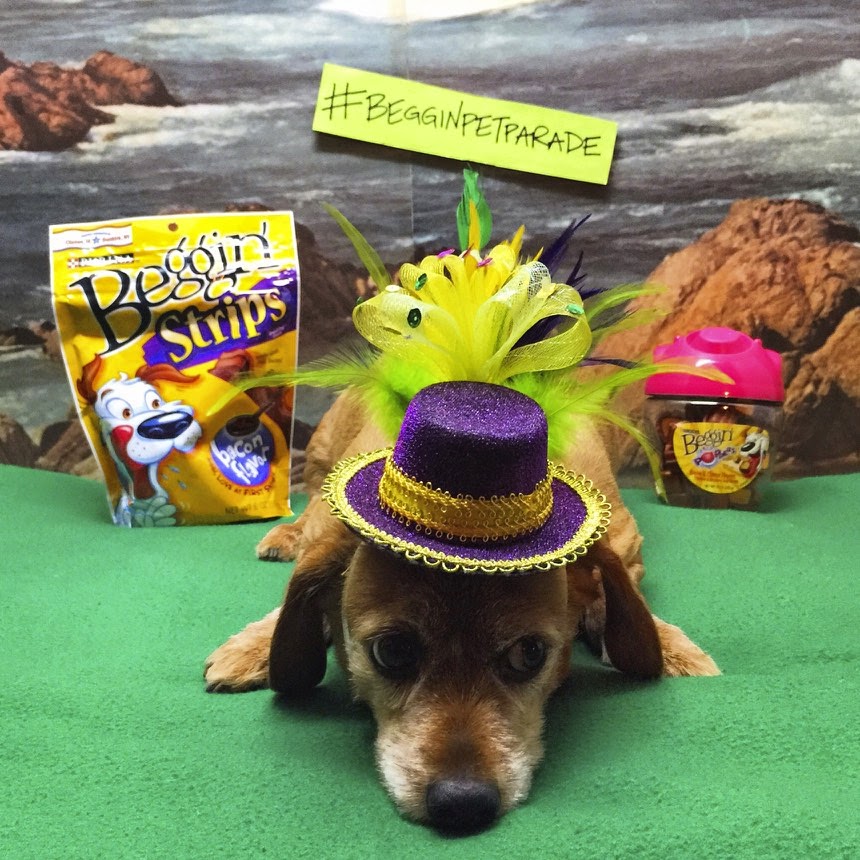 I think Patrick likes my bump.  He's always "high-fiveing" it and wanting to sit on (or near, as I push him away) it.  So darn cute.  I sure hope he shows his little bro or sis the same lovin'! 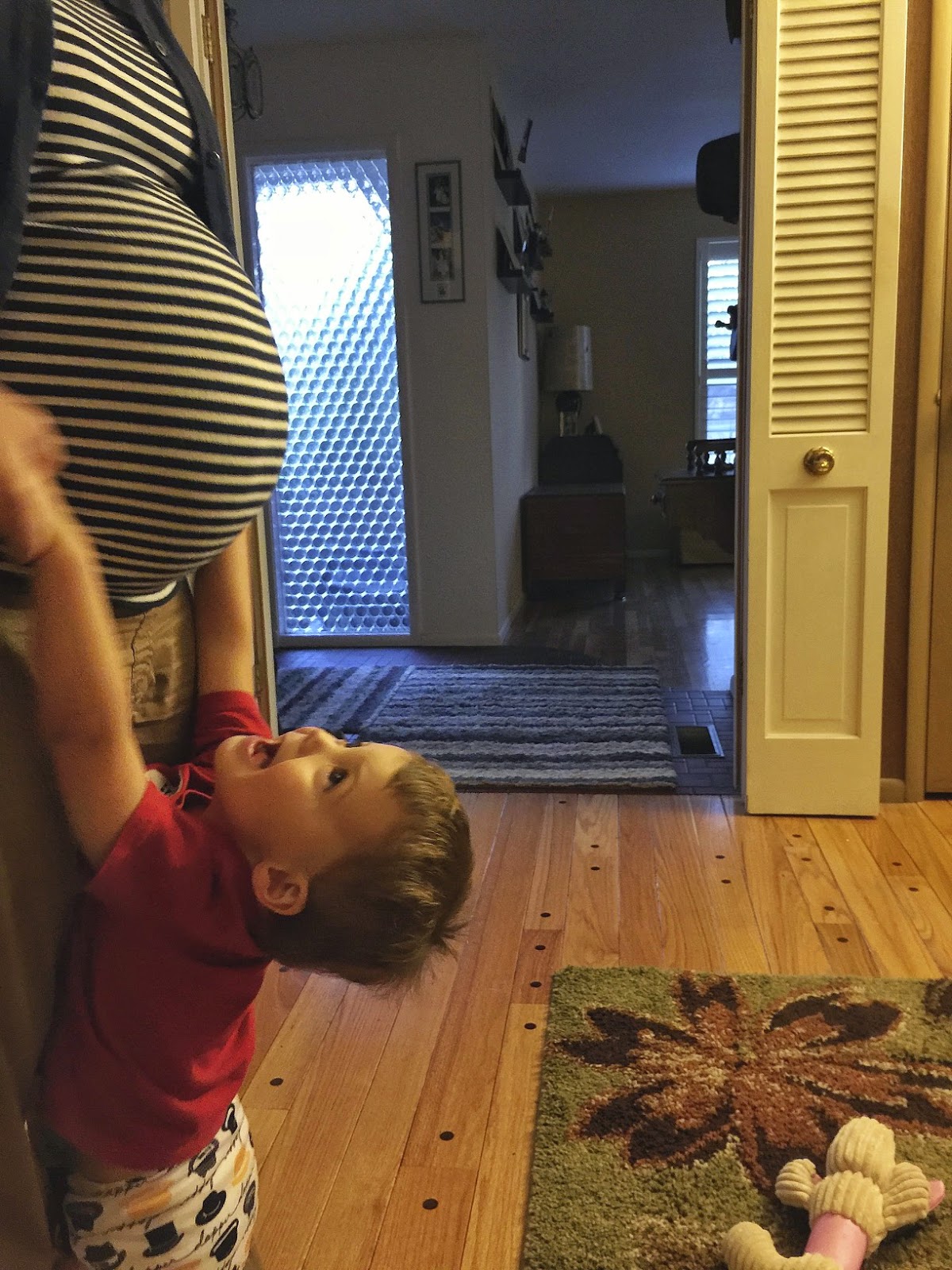 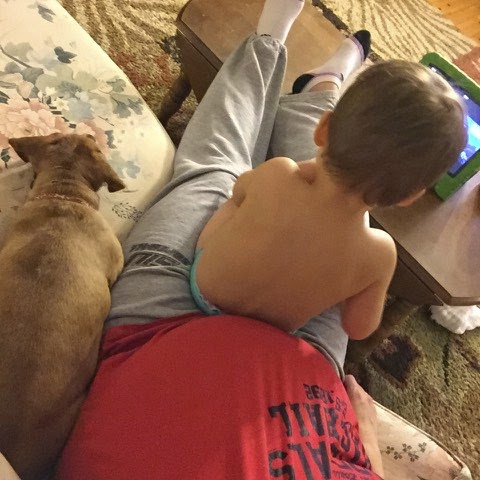 In the midst of Scooter's Beggin' shoot the other night, Patrick promptly ran up and snatched my props and would not give them back.  Seriously.  He carried them around all night long (teasing the crap out of Scooter) and it was only after he went to bed I was able to put them back in the treat bin. 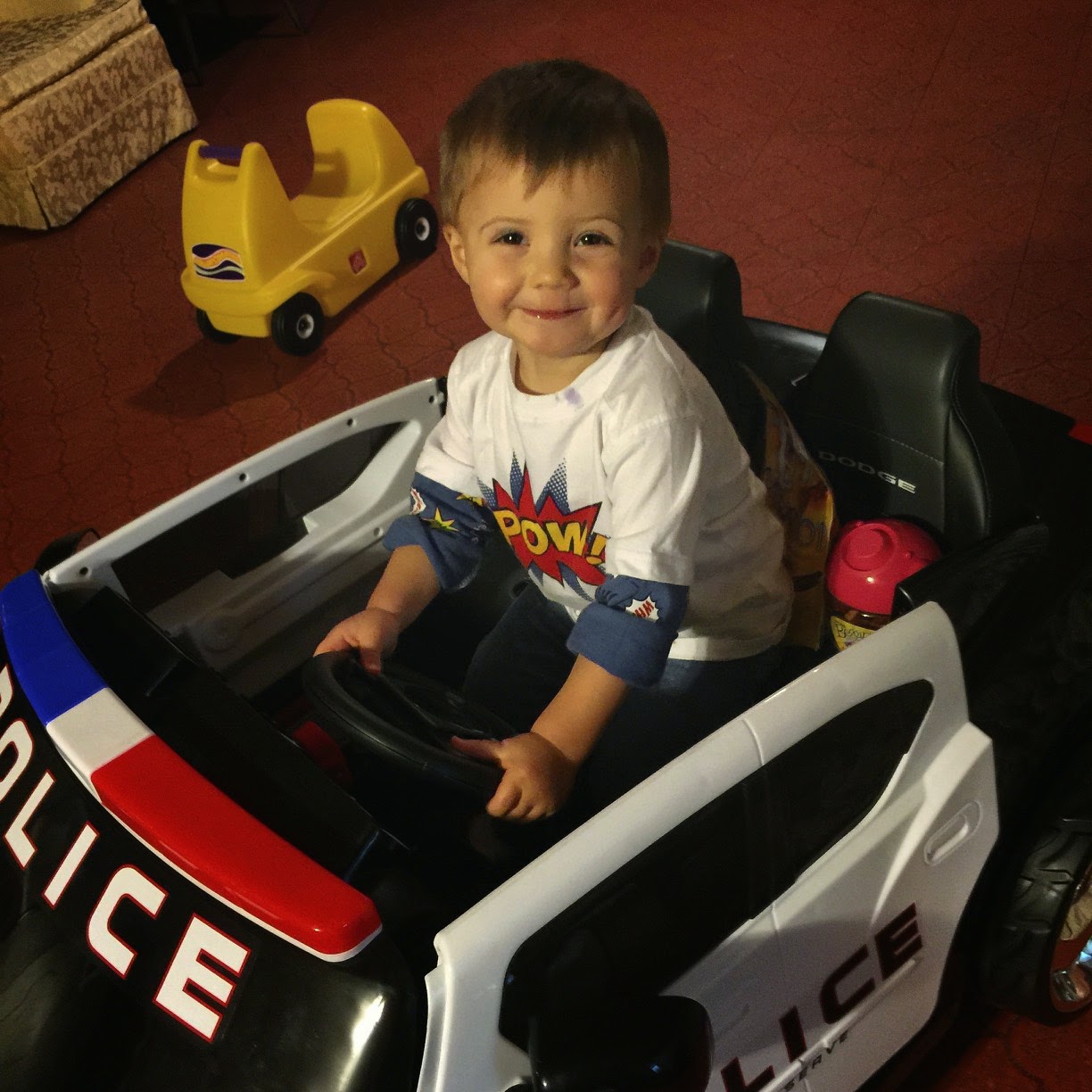 Patrick got a pretty sweet shiner this week over his right eye.  I have ZERO idea how this happened, neither does Mike.  His reply, when I asked him, "I think he might have fallen???"  So who knows.  Parents of the year again right here. I know "sassy" is usually a term for girls, but, I beg to differ: this kid of mine has some serious sass.  Evidence below. 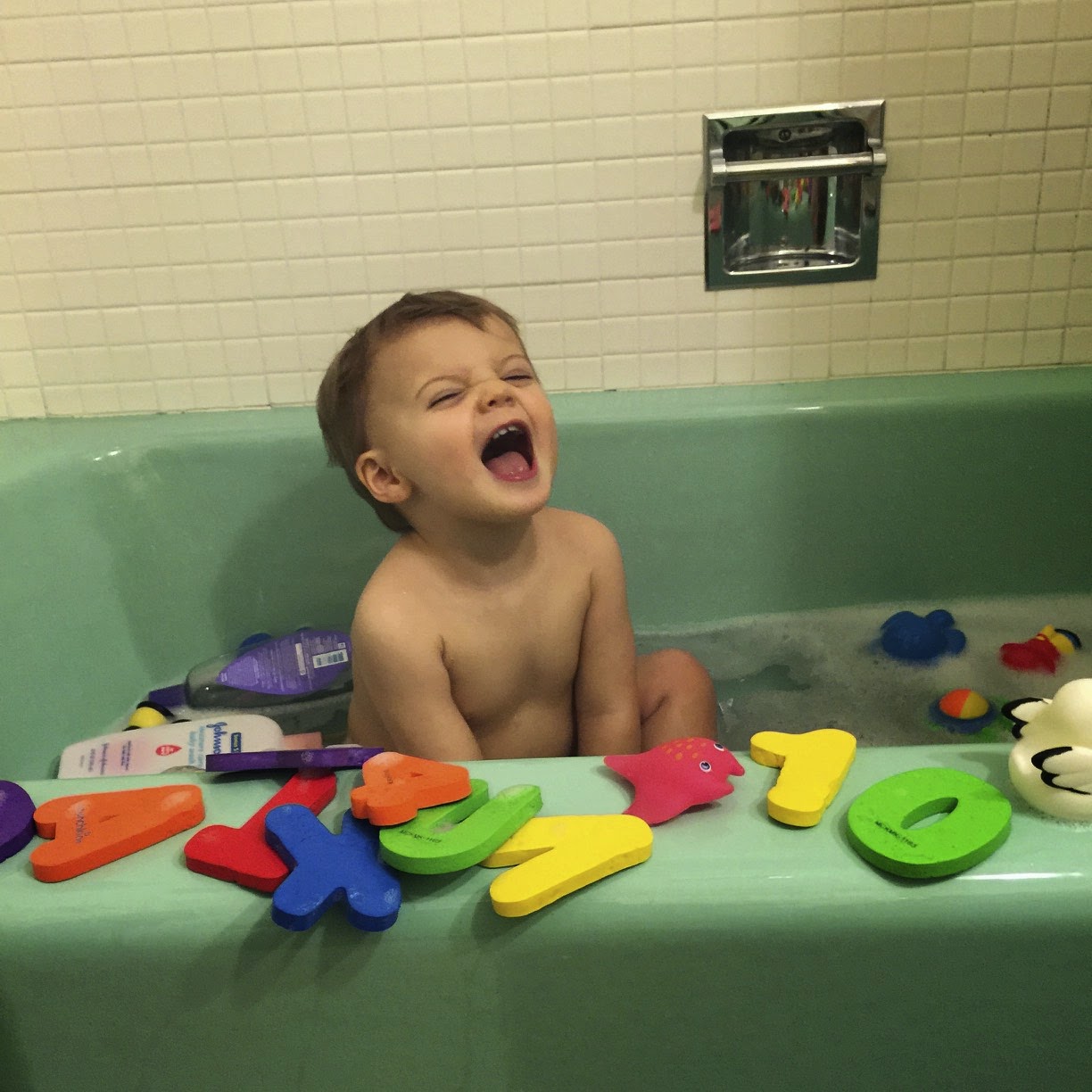 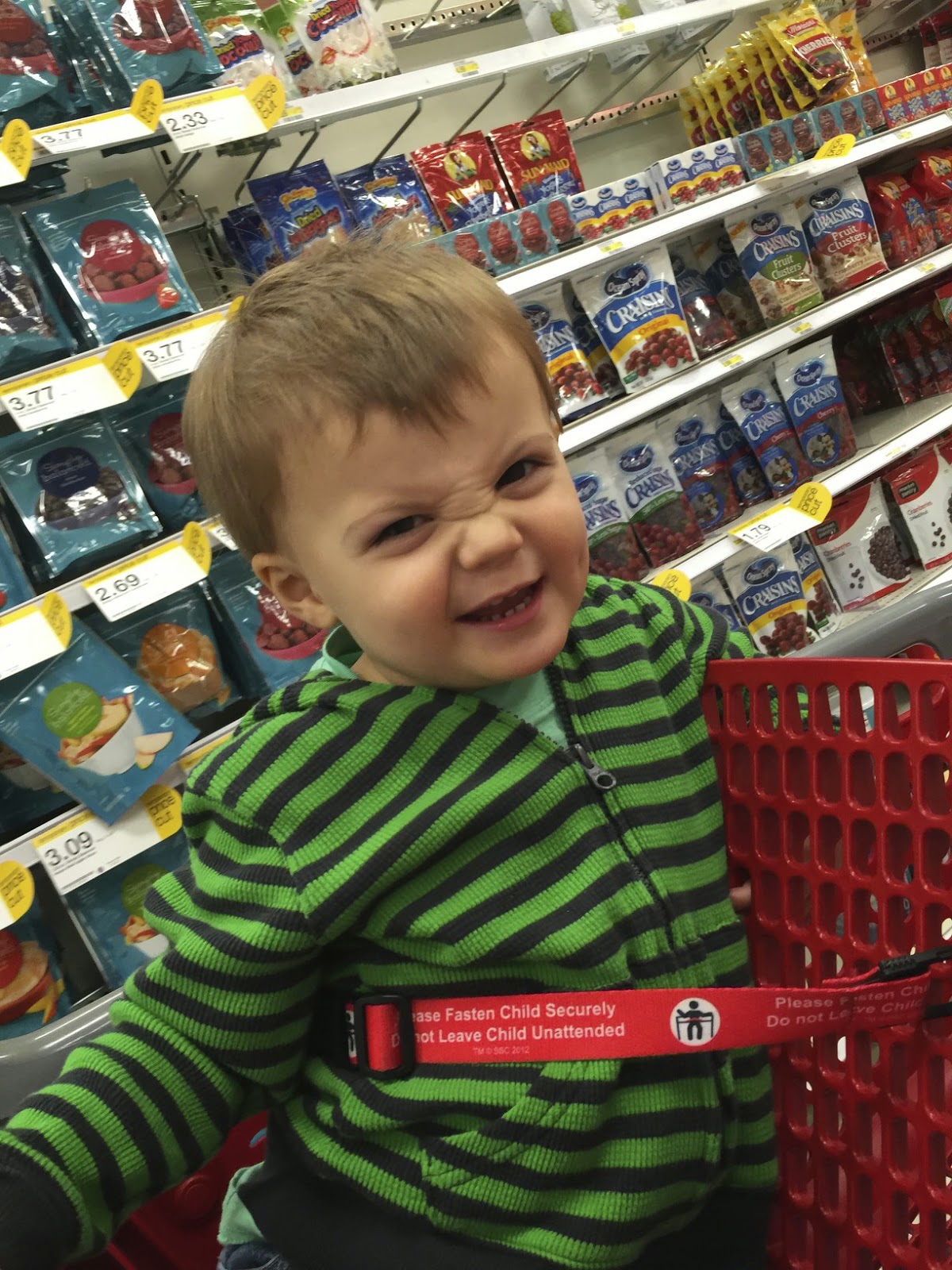 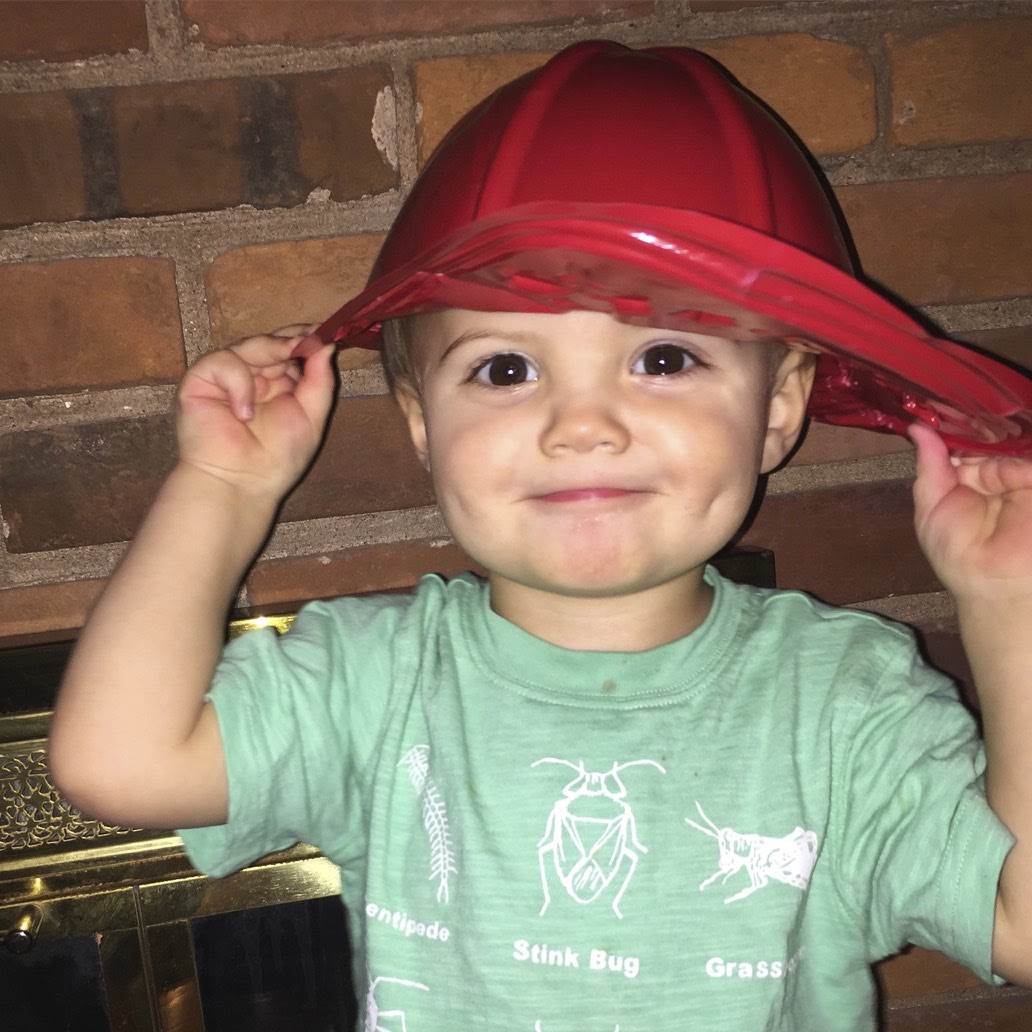 I also took a walk down memory lane and went through all of Patrick's 0-6 month baby clothes.  First off, how on earth was he ever that small?!  And secondly, it boggles my mind that we're going to have another tiny human before we know it filling in these same outfits.  Not gonna lie, it made me tear up a wee bit. 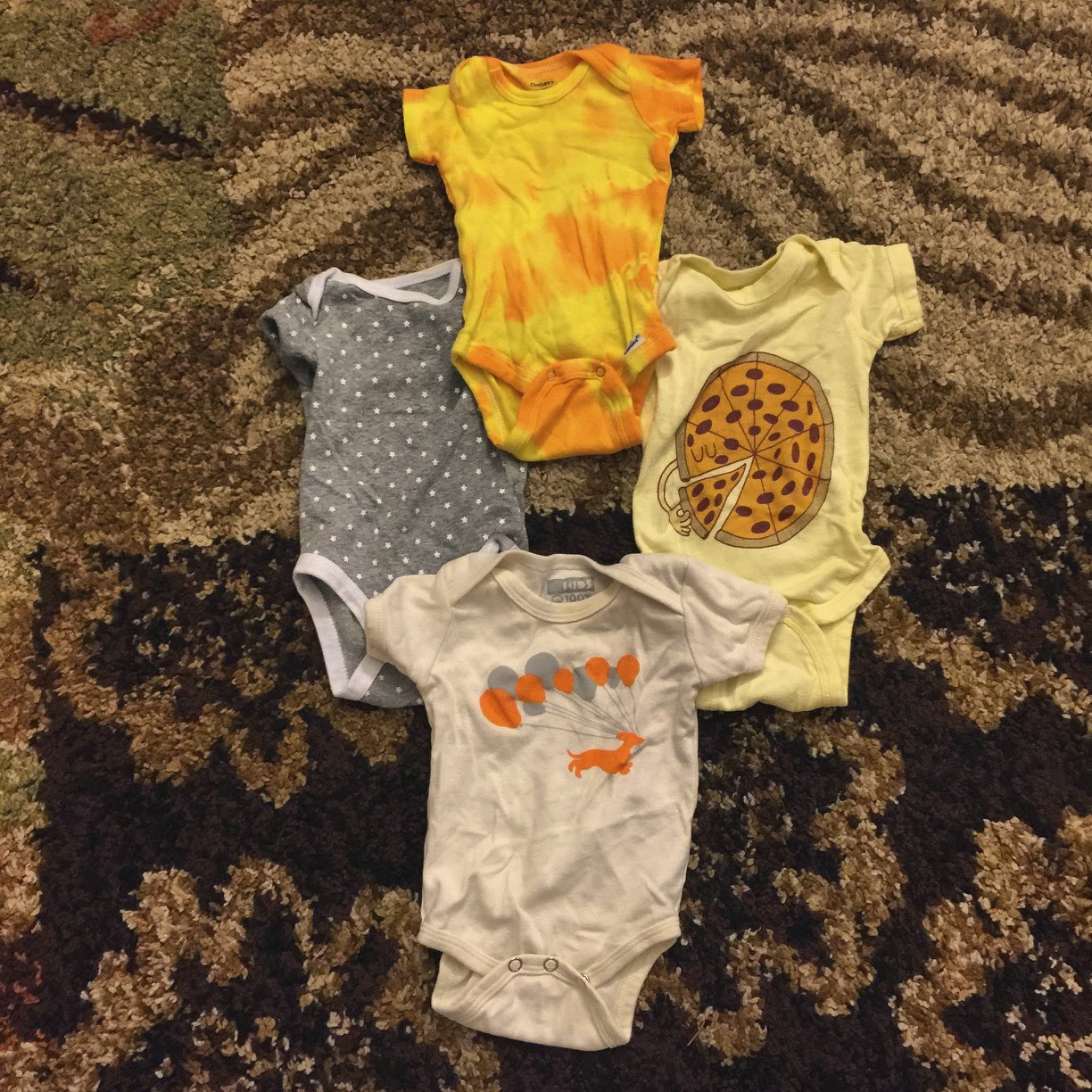 And here's an adorably-funny video my mom got at the grocery store the other day of Patrick going to town on some onions.  Wow.  Definitely Mike's kid cause I sure wouldn't do that!  Ha!  But I've watched this video like 25 times and can't stop--it's so darn funny!  The total game-faced look on his face gets me every.single.time.


So yeah, that about wraps up our week over here.  Super duper exciting, huh?!!  I kinda lacked on what to write about, other than I'm flippin' excited that it's Friday, because this week was such a doosey-of-a-long one, riddled with sickness, and Mike was working evenings.  Anyways, here's to a great weekend and hopefully a great week next week, where Mike has THREE weekdays off!  Halle-freaking-lujah.
Email Post
Labels: evenings Friday job Mike Patrick police schedule Scooter week in review