You know what's the hardest thing NOT to do with your kid? Compare him to other kids. 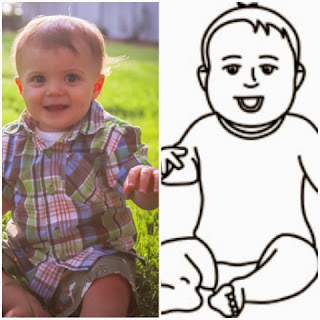 Prior to Patrick, this was something I swore I would never do, nor even care about.  Ohhhhh, how wrong I was.  No matter what I've done or tried to tell myself, I STILL COMPARE MY KID TO OTHER KIDS.  Honestly, I think this is impossible for a parent (mama specifically) not to do.  You get excited about milestones and want to share, then find out there's another kid younger than yours that has been doing this same thing for weeks now.  Oyyyy.

For example, Patrick isn't walking...yet.  He'll take a few steps here or there, but prefers to cruise around holding onto the furniture or just crawl.  Of course then, people tell me, "Oh, my kid was walking at 10 months," or, "Yeah, kids should definitely be walking by a year old," and I'm just sitting here like, "Uh, is there something wrong with my kid?!"  Then I start freaking out about how he's not doing something that a kid 2 months younger than him is, and going off the deep end thinking that he's delayed and going to have developmental issues.  Most of this irrationality is going on in my head, and I have to tell myself to calm the heck down and it's fine: here isn't anything wrong with him--and I know this.  He's perfectly healthy and all around just amazing, and does things at his own pace--which isn't early or late, it's perfect, cause it's Patrick timing.  I have to remind myself of all of the things he can do, and how well-behaved he is (if you're on instagram, I posted a pic of him sitting in his little lawn chair a few days ago watching my softball game: he sat there for an entire HOUR and didn't move, didn't whine, just watched and played with my water bottle--uh, pretty amazing for a 1 year old, right?!!).  But, I admit, I can't help still mentally comparing him (mostly in my head...until now, cause I felt compelled to write this post and get it out!) to other kids around his age!

And you know what else doesn't help?  Those silly BabyCenter emails that I still get every.single.week. telling me what milestones my kid should be achieving and what they should be doing.  Take the one this morning I got: 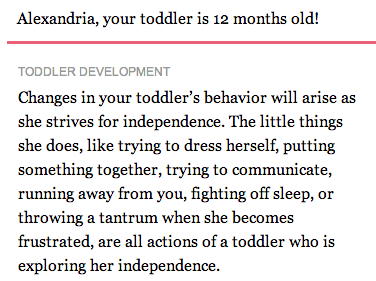 Uh, "trying to dress" himself?!!  ARE YOU KIDDING ME?!!  There's no way he's doing this, let alone ever shown any interest in trying to dress himself (other than thrusting his arms and legs through the holes as I'm getting him dressed).  And "running away from you"?  MY KID DOES NOT RUN.  He crawls--lightning fast, I might add--but definitely not running.  And can 1-year-olds actually throw a tantrum?  When Patrick is tired or doesn't like something, he whines, but definitely not "tantrum"-esque.  I honestly was floored when I read this, because to me, these seem more fitting "developmentally" for a 2-year old.

My guess is this'll get even worse whenever #2 comes and I start coparing new kid (or heck, #2's pregnancy even!) with Patrick and if he/she is doing things quicker, slower, or the same as Patrick.  It's human nature to be observant, right?  And comparison is just a part of that observant nature...right?

Anyways, it is sooooo hard not to compare your kid to others.  I'd say borderline impossible, cause, like I said before, it's human nature to do this.  However, knowing this and admitting to myself (and now publicly), makes me feel a little better.  It's okay to compare, despite how much I try and resist it.  However, it's not okay to dwell on it.  I've accepted that I know I'll be comparing my kid to others and future kids probably for the rest of my life; however, I am determined not to dwell on this, but instead focus on the awesome things they are doing and just know that they are doing things at the absolute perfect speed and timing, their timing.
Email Post
Labels: challenge comparing comparison kids Patrick