Woopsies. I Broke My Own Rule.

Remember what I JUST posted about?!!  Specifically #2 of my 'Parenthood' post, about how your kid's sleep schedule is the most important thing ever.  Well, today, I challenged that sleep schedule, because, dang nabit, we had errands to run and places to go!  Mom fail on my part. 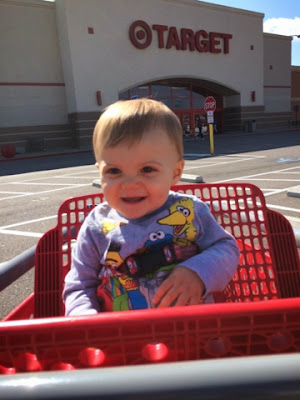 I took the day off and Patrick and I had to do some massive errand running, which happened to coincide with Aunt Katie and cousin Lizzy needing to do some too!  So we decided to meet up and hit up all of the places we needed to go: Target, Cotton Babies (dangggg-they were closed for a funeral, will have to hit them up tomorrow), Babies 'R Us, and the Oshkosh/Carter's outlet...this was all of course after we had already gone to Target and to the Diamond Shop to pick up the Cardinals tickets Scooter won for us in a contest (and, side note, they are some sweeeeettttt seats!!). 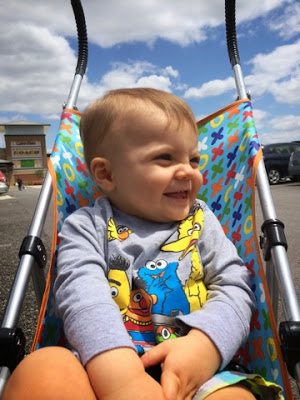 I pushed it.  I really did...we hit all of the stores and Patrick was being ah-mazing--only had to bust out the cookie monster Cheerio container once--so I figured we could push lunch/nap back a bit. 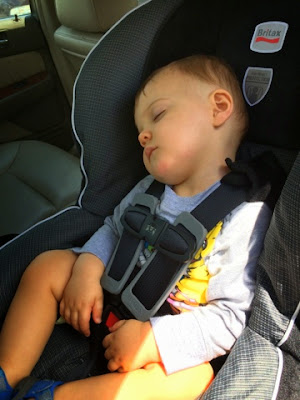 Well, just as we were rolling into lunch a little after 1pm, this is what I saw when I went to unbuckle him: PASSED OUT.  Like not waking up passed out.  Greatttttt.  I was hungry, I know he had to be hungry, so I unlatched him and got him out.  He awoke (probably because of the blinding sun) and immediately starting jibber-jabbing.

When we got inside for lunch, I whipped out a few food pouches (I knew he wouldn't last until the food got there) for him to snack on.  He was doing pretty good...a little fussy/tired, but overall great.  Well, then the food came out and the french fries weren't cutting it for him: he was completely losing his mind.  Yelling (thank God they put us in the separate back part of the restaurant!), wanting to be held--then as soon as I picked him up wanting to be put down (of course), and just wanting to go.  So, I left some cash for my check, boxed up the rest of my food, said a quick goodbye to Katie and Lizzy, and we were out the door.

Now, if you remember from my post I said about how they get overly tired: YESSSSS times a thousand today.  As soon as I got him inside once we were home and changed him, I put him in his crib.  He wasn't having it; he proceeded to throw EVERYTHING out of his crib (multiple times), bounce/jump, yell, and scream.  I knew he had to be tired, but now he was angry (and then all excitedly angry--does that even make sense?!! whatever. it's totally what he was like) that he was tired and wasn't going to just fall asleep.  GREATTTTT.  I had about a thousand things to put away from our shopping trip and he wasn't about to let me.  Plus, it was like 2:30--a whopping 1.5 to 2 hours after he normally goes down.  STUPID STUPID STUPID ALEX!  I totally should have come home and skipped lunch after shopping, but I didn't--I wanted Lizzy and Katie time!

Anyways, after about 45 minutes of yelling and fighting sleep, someone FINALLY fell asleep--almost 3 hours after he normally goes down, and about the time he is usually waking UP from a nap. 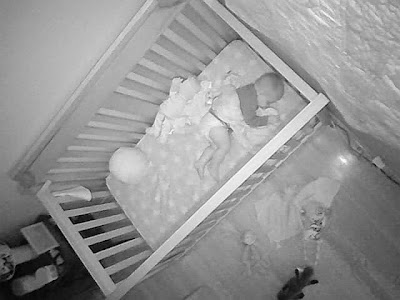 100% my own fault on this one.  We have dinner plans tonight (back to #4 of my list: we made these kid-friendly dinner plans 2 weeks ago...with friends who also have kids...so we're good on that...plus it's at our favorite Chinese restaurant, so I'm actually super excited about it!) so as I sit here and write this I know I'm going to have to wake him up from his nap (which he HATES being woken up--a new level of DEMON there), and then since he slept later we'll probably have oodles of fun (haha, yeah right) putting him down for bedtime a few hours later.  I PRAY that he doesn't have too much trouble going down for the night AND that he doesn't grace us with an early (or middle of the night) wake-up call, as sometimes happens when his sleep schedule gets messed with.

Ohhhhh, the joys of parenthood!

I thought I'd document my own rule-breaking for you today...to just show you in reality how much their sleep schedule is vitally important!

However, I wouldn't change today one bit; we had a great time with cousin Lizzy and Aunt Katie, got a ton of new stuff (divided plates!  Patrick-size utensils!  new summer clothes!), and Patrick was soooo good for 96% of the time.  With that said, these "messed up nap schedule days" are okay once in a while, because sometimes you just need some shopping time with your sister-in-law and niece!  We'll be back on our normal nap/sleep schedule tomorrow, I promise :)