I cannot believe how fast this year has gone.  It honestly feels like just yesterday I was writing Patrick's 11 month post, and the day before that we were bringing him home from the hospital--and no, I'm not exaggerating.  It really does go way too fast.  You're right Kenny, Don't Blink. 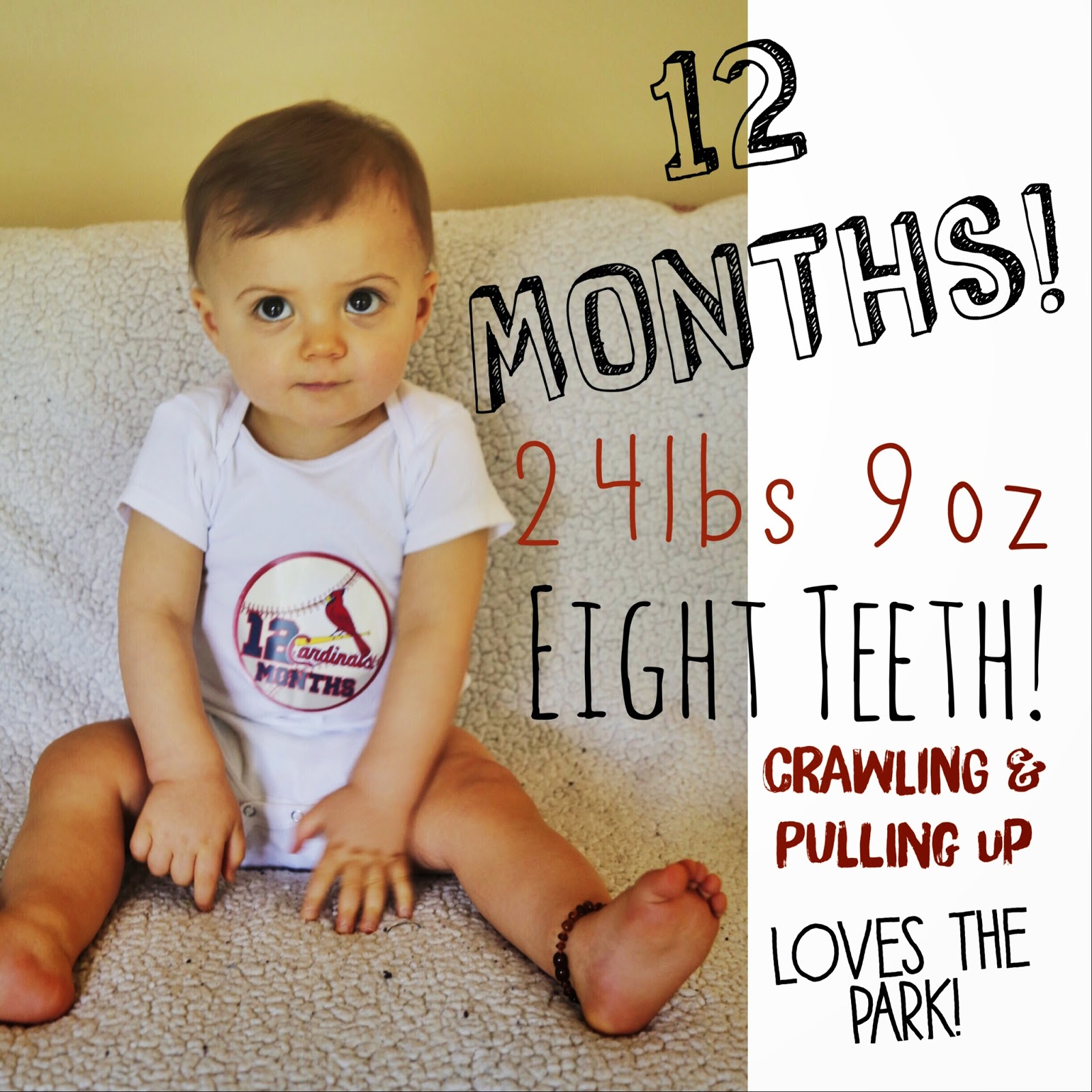 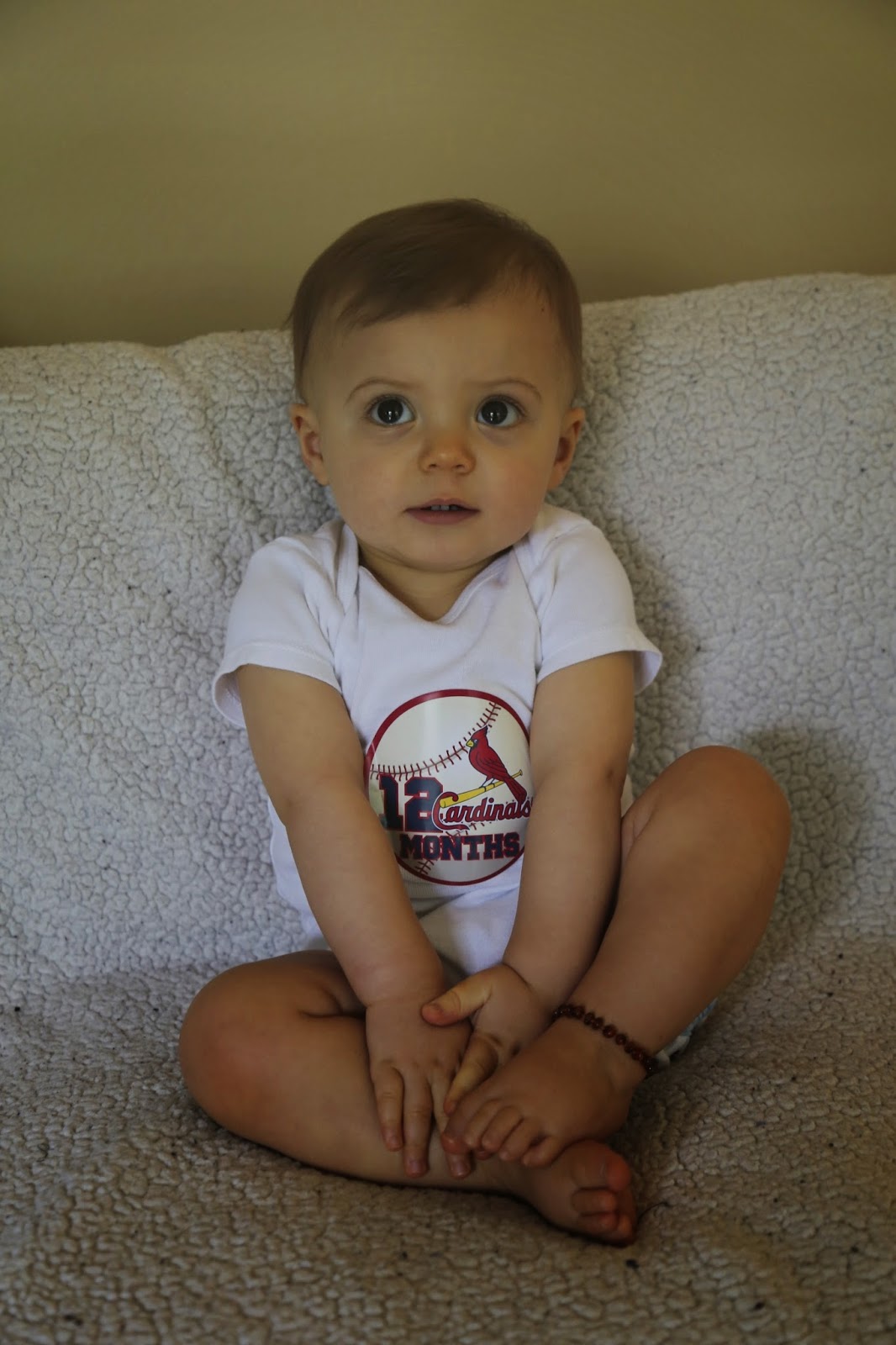 It does make me really sad that I won't do any formal "monthly" updates any more...I mean, I'll still be blogging like crazy about Patrick, but they won't be in these lovely monthly milestones blog posts.  I totally still could, but I feel like once we hit 12 months/1 year, it's time to move on from the "baby" monthly posts to more general (and less formal) toddler posts.  Plus, they don't make those adorable monthly stickers past 12 months...which to me, is an indication that months 13 and on don't need to be documented as regimentally as the first 12 were.

This month, as with the past several, these photos were not easy to take.  Mr. Wiggles does not like to sit still, so it makes for a rather challenging capture.  Luckily Mike was home to help me (try) and hold Patrick's attention to get these pics.  I really do take HUNDREDS of photos just to get a few good ones.  This is one thing I won't miss with not doing these updates: the struggle for these staged pics to turn out good!

We did a mini photo shoot for his birthday too--and by mini, I mean SHORTTTTT.  Literally put (one) of his birthday outfits on and snapped some pics of him in the front yard.  But OMG, how freaking adorable is he?!!  The bow tie and suspenders KILL ME!! ($6 on Amazon by the way--excellent score!  And the shirt is from Carters, but my mom got it at a garage sale for $2, the shorts I got on super clearance at Kohl's for $1.50, so his entire outfit was under $10! NICEEEEEEE) Anyways, here's a few adorable "formal" pics for his first birthday...and one not-so-adorable.  Little man didn't want his picture with Scooter for some reason! 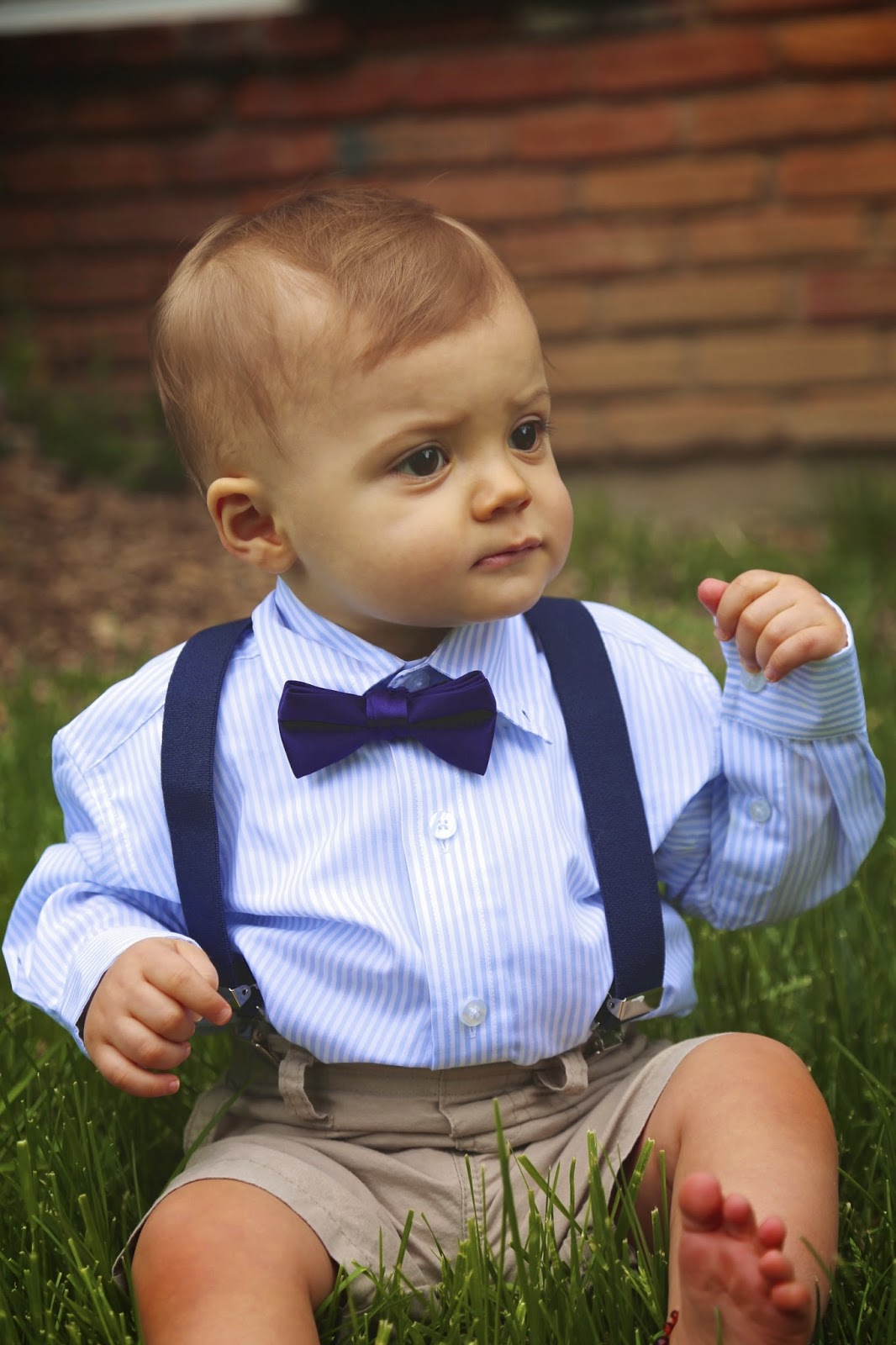 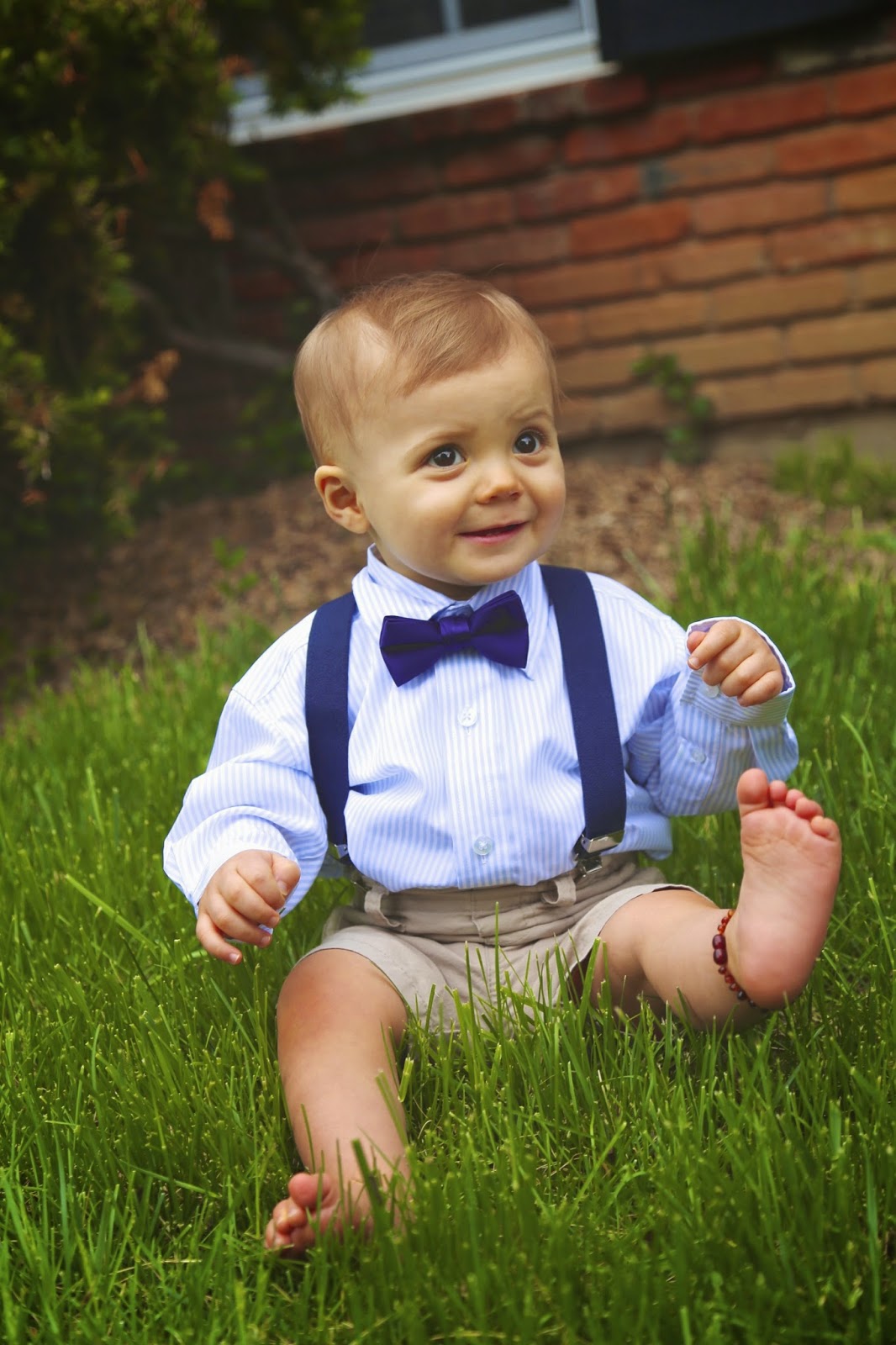 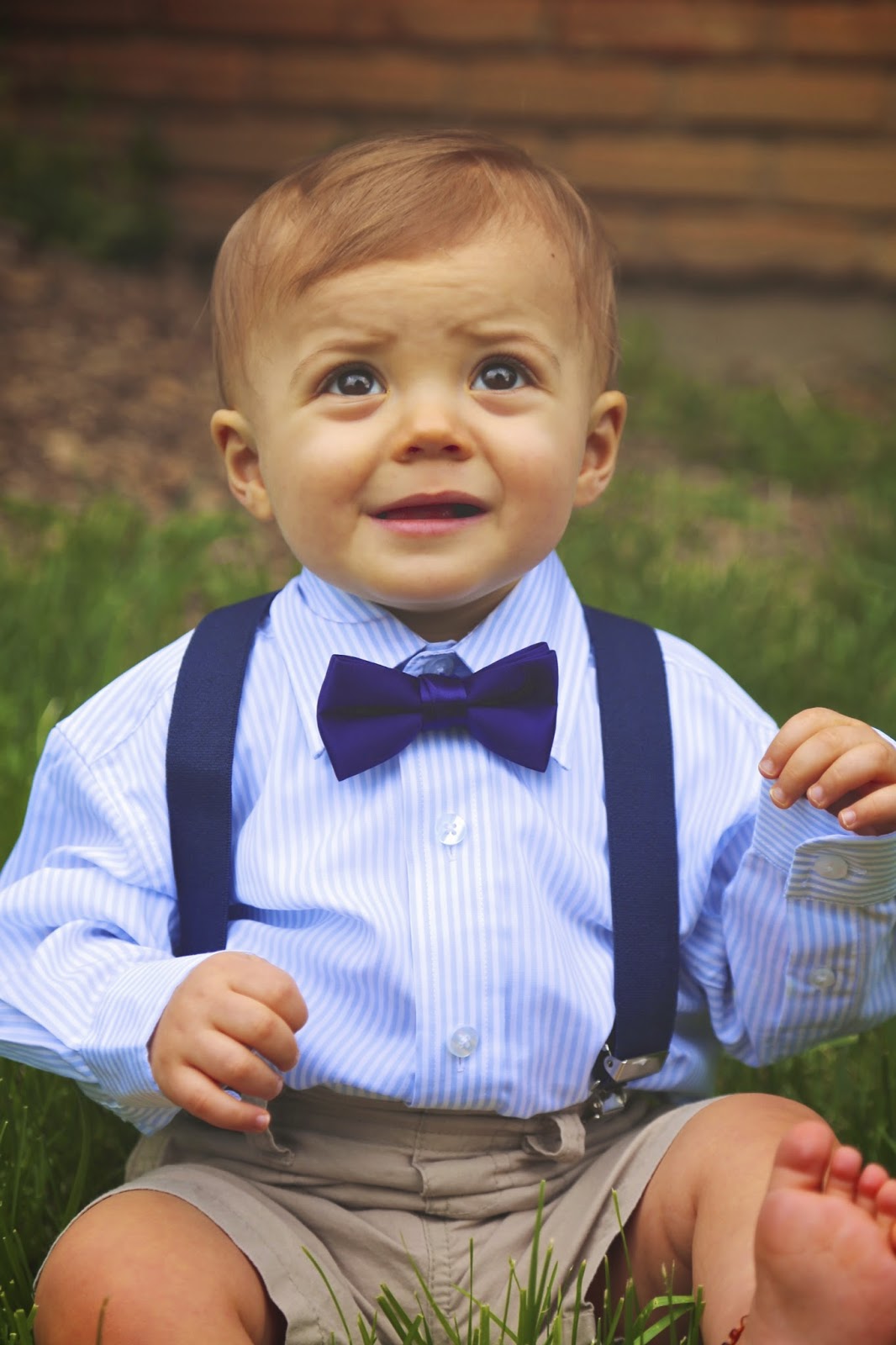 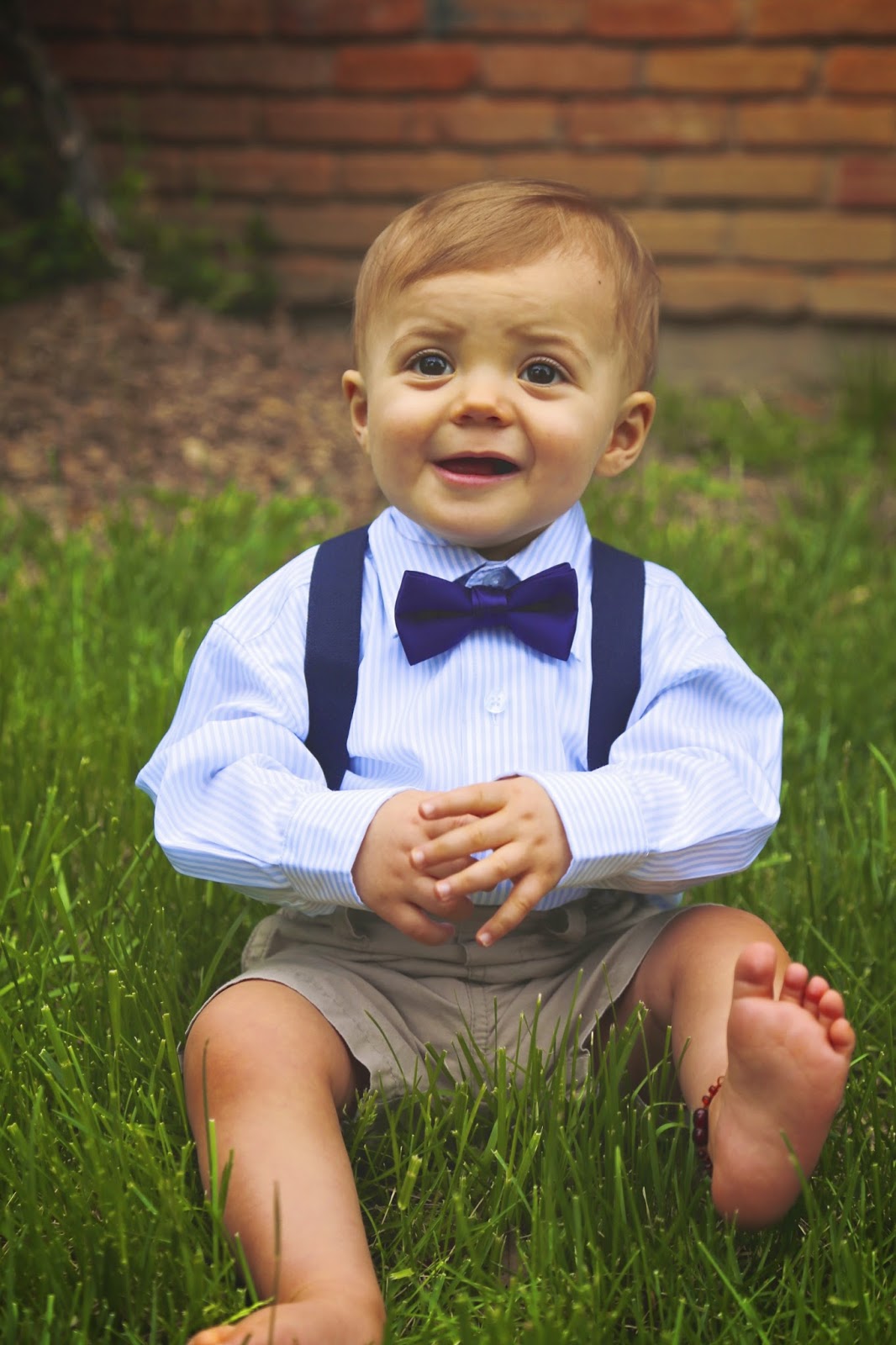 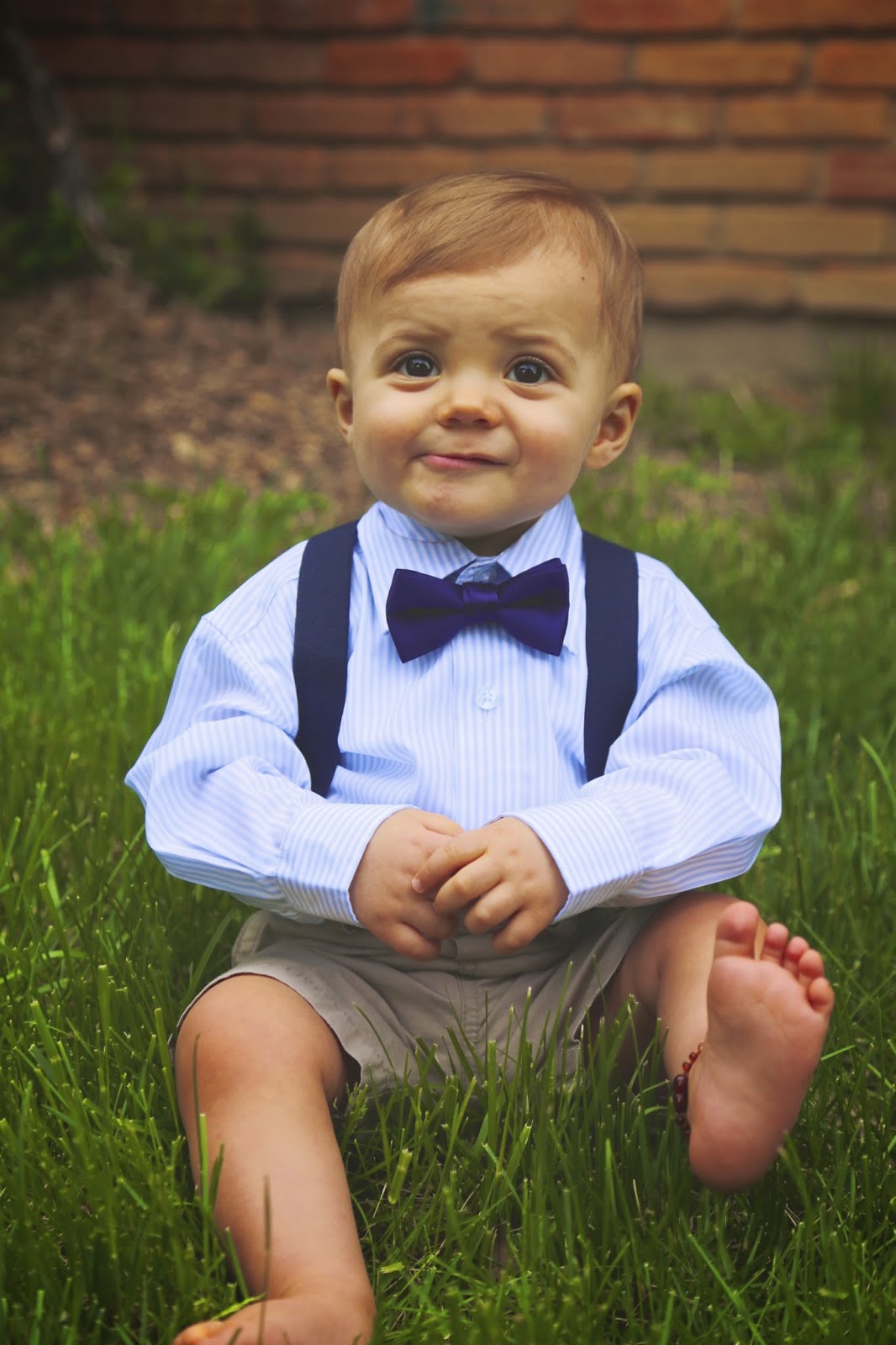 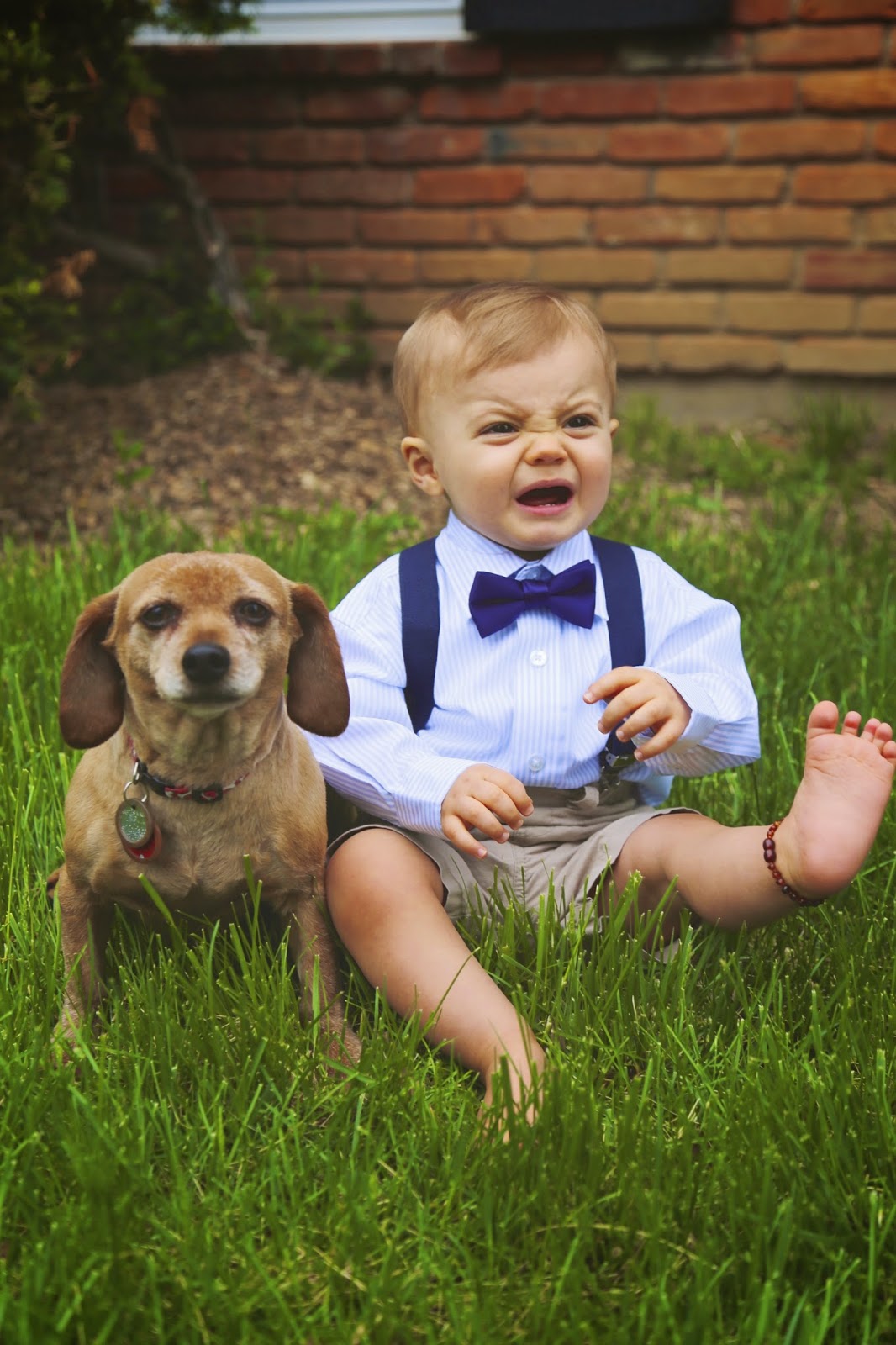 Patrick's big first birthday party (or parties, since my mom is hosting a family one on Sunday too!) is tomorrow, and it's going to be amazing.  It's Muppet-themed (duh! what else would it be?!!) and I cannot wait for him to play with all of his little buddies and destroy his Muppet cake!  You KNOW I will have a blog post coming up later this weekend about all of his birthday weekend shenanigans.  I just hope I snap enough pics! Haha!  You KNOW I will.  I'm snap-happy lately!

For his party I actually took all of his monthly pics and monthly stat pics and hung them with clothespins on twine on display for the party.  Here's a collage version (I just love collages!!) of all of his stat pics together...I am sooooo glad I did these every month with the same pic and some of his noteworthy accomplishments (weight, teeth, interests, etc...) for that month. 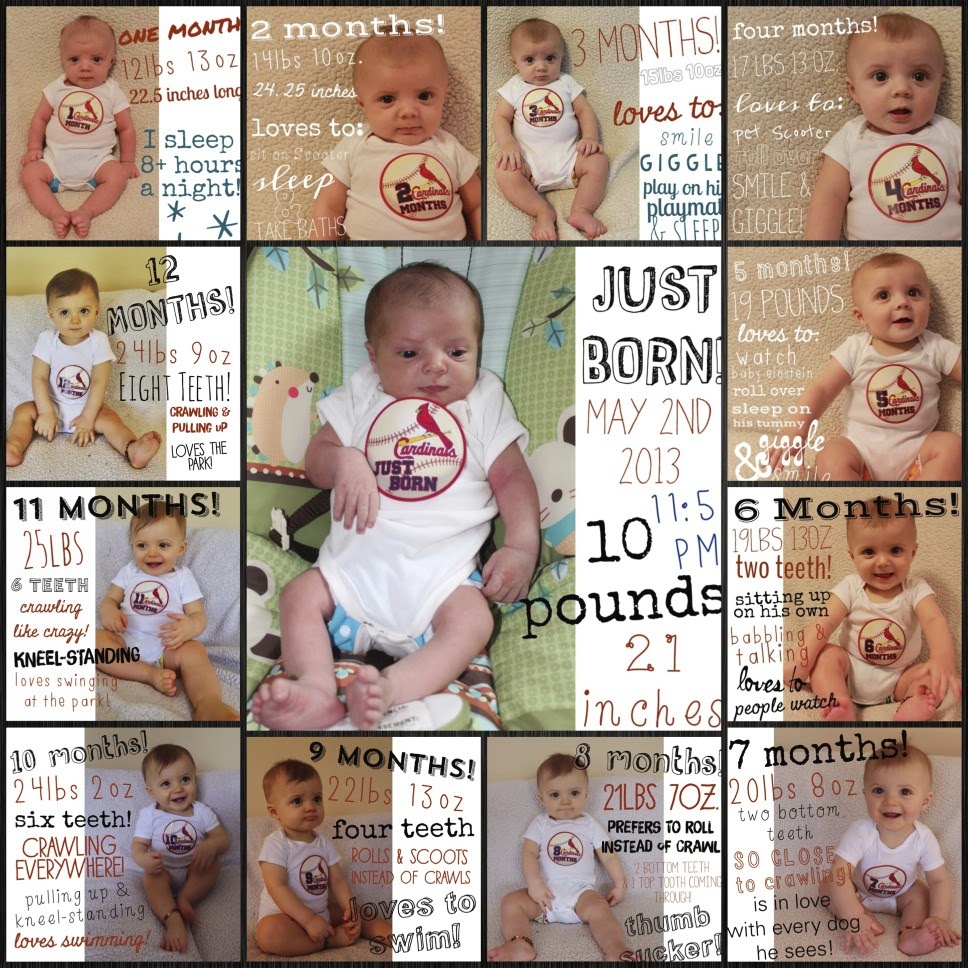 So, to end my boy's one year blog post, I'll end with some milestones/updates/recent happenings.  No longer is my baby a baby, but he is officially a toddler.  Cue mama tears.

I'm sure I'm forgetting some big milestones/events of the past month, but baby brain turns into mommy brain and most of the time my head is still in a fog.  Anyways, I'll leave you with my obligatory collage photos...my last ones.  tears. 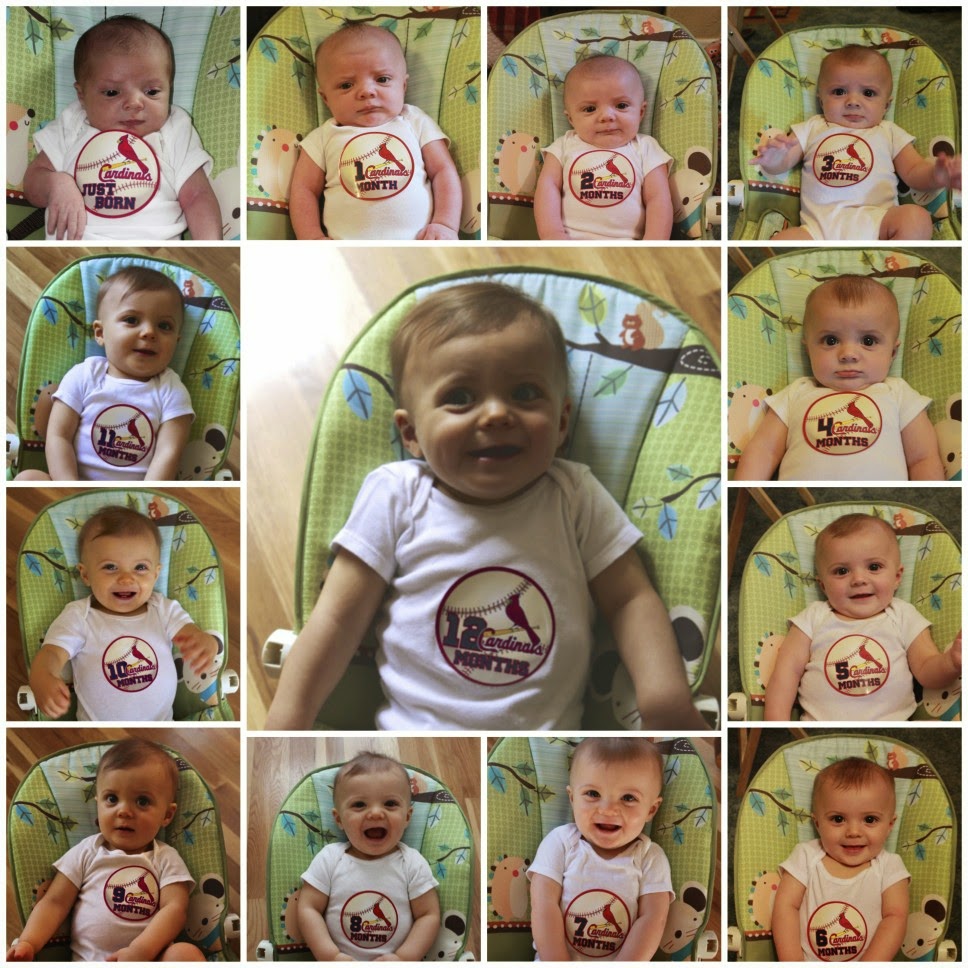 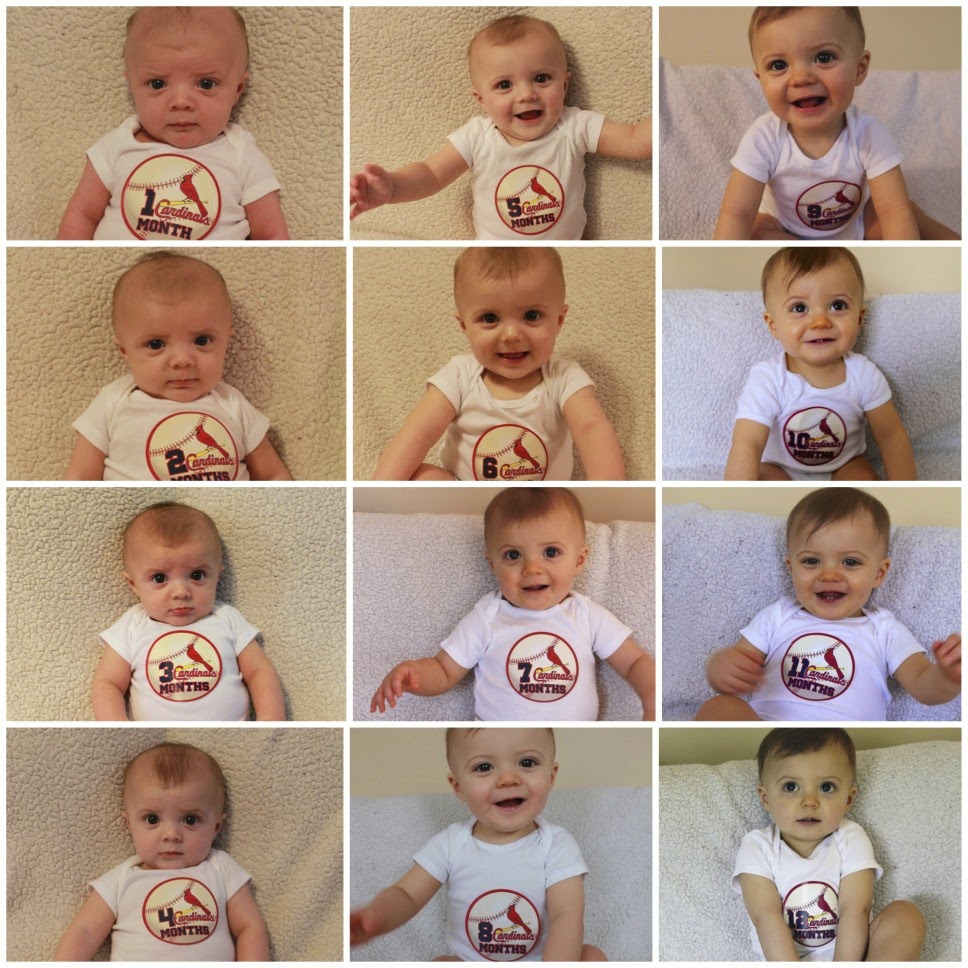