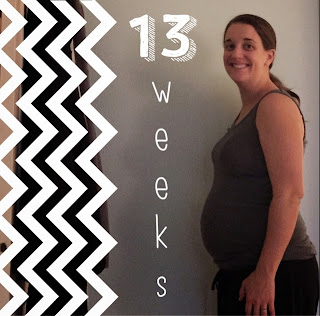 Supposedly, if I remember correctly from last go'round, the 2nd trimester is the best one: you're not gigantic yet (but that can be debated--do you see my pic above?!! I'm huge already!!), you're {hopefully!} over any nausea/morning sickness, and you {supposedly} get a little burst of energy back (aka not so dead-dog tired all the time).  Although I will firmly say I'm on the big side already, I do actually feel better--and have this past week or so--and have hardly had any nausea spells or anything!  So HOPEFULLY, fingers crossed, knock-on-wood, that ship has sailed and this next trimester (or two!) will be nausea-free.  I definitely haven't felt any bursts of energy or anything, but not feeling nauseous and like I'm going to puke all the time is definitely awesome.

I have definitely noticed this go'round more food aversions and things that just make my skin crawl when I think about them (last time the only thing I developed an aversion to was Dr. Pepper--which I never lost!  I still can't stand it!): rollercoasters (just seeing a picture of them or the thought of them makes my stomach churn in a baddddd way), pulled pork (what the heck?!! I love pulled pork!  Now the thought of it--or, gahhh, even the smell of it--repulses me and makes me want to gag), and cleaning up Patrick and/or Scooter's #2s (this comes and goes, but is crazy cause cleaning up poo never bothered me before, but now the smell alone sends my stomach lurching).  I'm pretty sure there are others I just can't think of right now...but I definitely feel like my stomach is not as rock solid (nor is my gag reflux) as it use to be.

Okay, well that's about all I've got for week 13!  I think I go back to my doc in a couple weeks for another check up, then the appointment after that would be the big midway anatomy scan ultrasound!  But I, unlike the majority of the population, could care less about that one (I actually even pushed it back a week so it'd be at 20 weeks instead of 19 weeks) because we're not finding out the gender.  Yes, it'll be nice to see our little squid and make sure he/she is developing correctly and such, but I just don't get crazy-excited or anticipatory as others who are finding out the gender at that appointment.  Until next week...adios amigos!
Email Post
Labels: 13 weeks baby baby #2 baby Mooney documenting the bump pregnancy