Ahhhhh, fall.  Oh, how I love you so!  The weather in STL lately has been absolutely gorgeous--75, sunny, and the leaves beautifully changing and falling.  If I could bottle up this weather and unleash it at will, I totally would.  It's been just lovely.

Anyways, this weekend, the weekend before Halloween, we were really excited about: it was my aunt Monica's annual Halloween bash at her house.  To say she goes ALL OUT is an understatement: I think she starts planning and prepping for this party a year out--not kidding.  Anyways, Mike and I realized this was the 6th time we've hit up her party!  Wayyyy back in 2009, not long after we started dating, we hit up her party and I introduced Mike to my crazy family for the first time...here's a little gem from 6 years ago from that shin dig.  Ahh, skinny Alex. 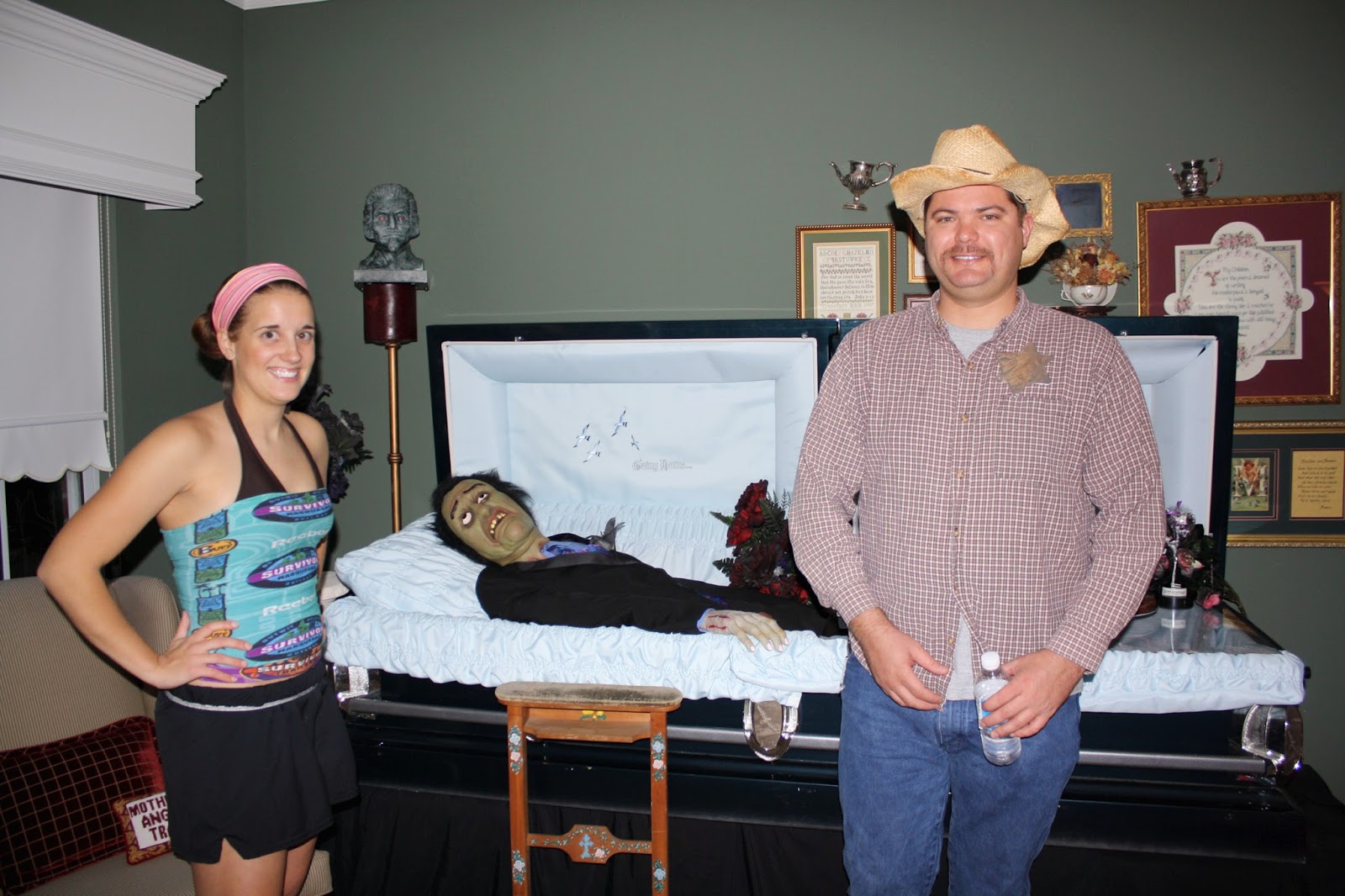 So we were really excited for this year--Patrick was having a sleepover at Grandma and Grandpa Mooneys, and mom and dad got a date night, Halloween style.

When we went to drop Patrick off, the weather was again just beautiful, so we saddled up Lizzy and Patrick in the wagon and snapped some cute pics of these two cousins...who both apparently got the "game face" memo when the camera was snappin'--not ONE of them ever cracked a smile.  Typical. 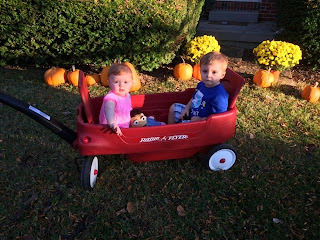 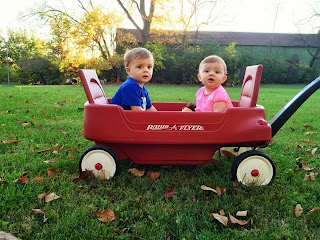 After we said goodbye to Patrick, we then headed back to get our costumes on: I was creatively a skeleton, with the cute mama skeleton shirt I found on etsy, and Mike was a Pharaoh.  Kind of went together, right?!!  Any ways, we were off! 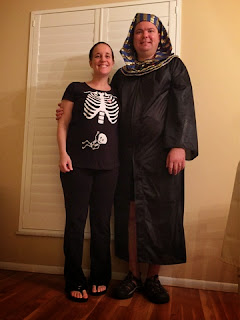 The party was a hit.  Monica totally outdid herself AGAIN.  Seriously, each year is better and more elaborately decorated than the last.  And each year has a theme (which usually coincides with whatever costume Monica finds), so this year was Bates Motel.  It was awesome.  She had TVs playing the original Psycho the entire night, more food and drinks to feed an army, and decorations that literally went floor to ceiling.  Now, here's where I screwed up: I have ZERO pictures (other than the two below) from the party.  Yeah, so I'm going on about these decorations, and I have nothing to show for it.  Oops.  My bad.  So not like me!  Anyways, you'll have to take my word for it that the decor was amazing.  You can kind of tell from these pics. 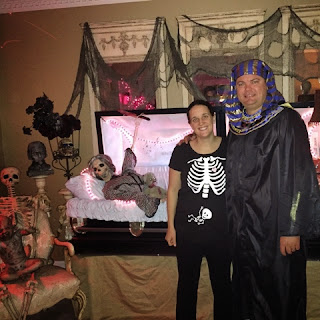 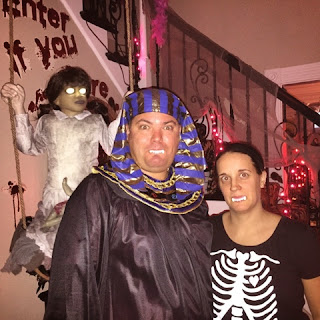 We had a blast--and we stayed out wayyyyy past my bedtime too!  Seriously, I was impressed with myself.  But I did hit a wall about 11:15 and told Mike "we gotta go now or I'm not gonna make it home" so we left.  We had a great time and it was some prime people watching--my aunt has some very animated friends :)  Their costumes alone were worth it to go!

Today we got to celebrate (a few days early!) with Goose for her 87th birthday!  We had a little party at her nursing home and it was fantastic--a great turn out!  It was so good to see so many people there for Goose and to see Patrick loving to get some Goose time in as well. 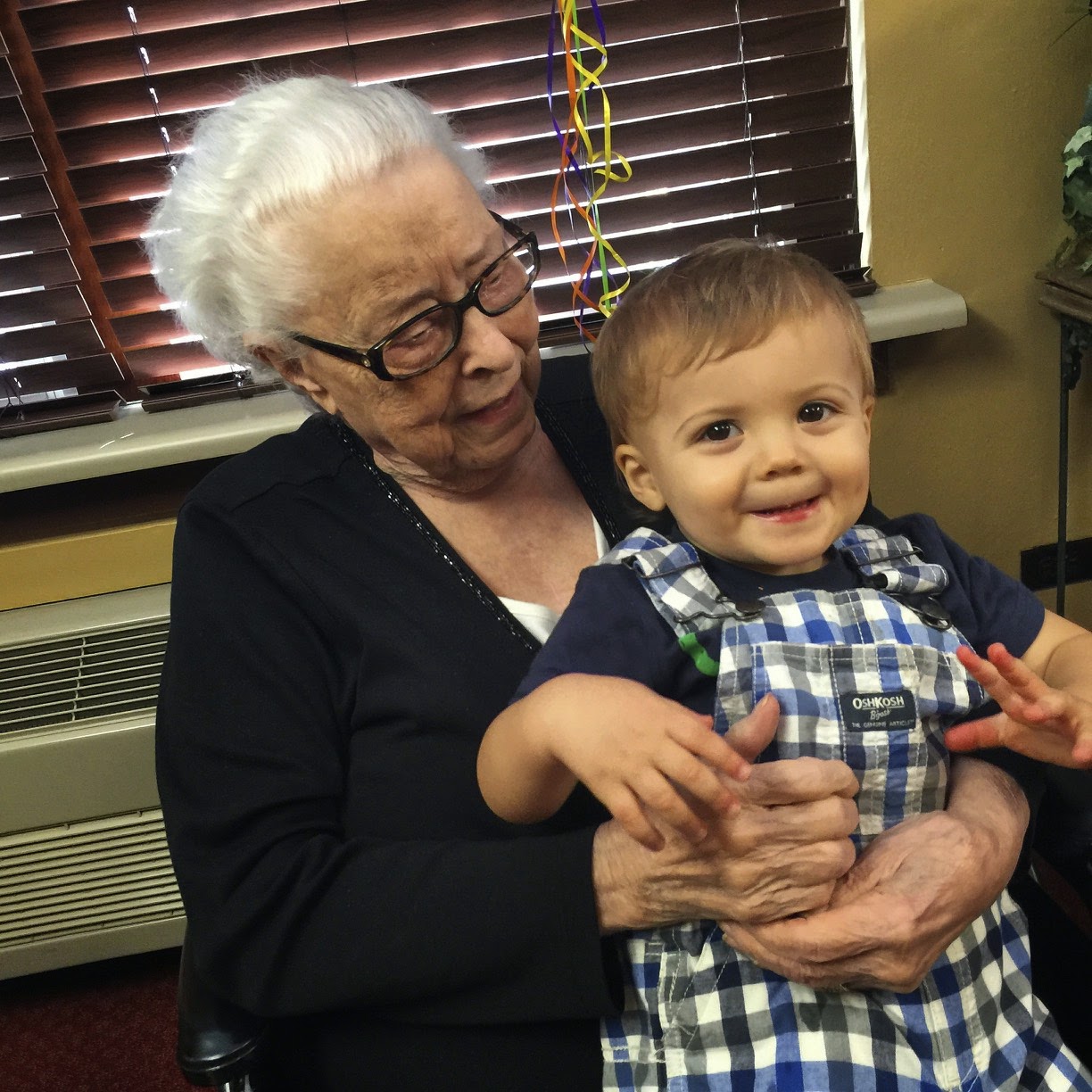 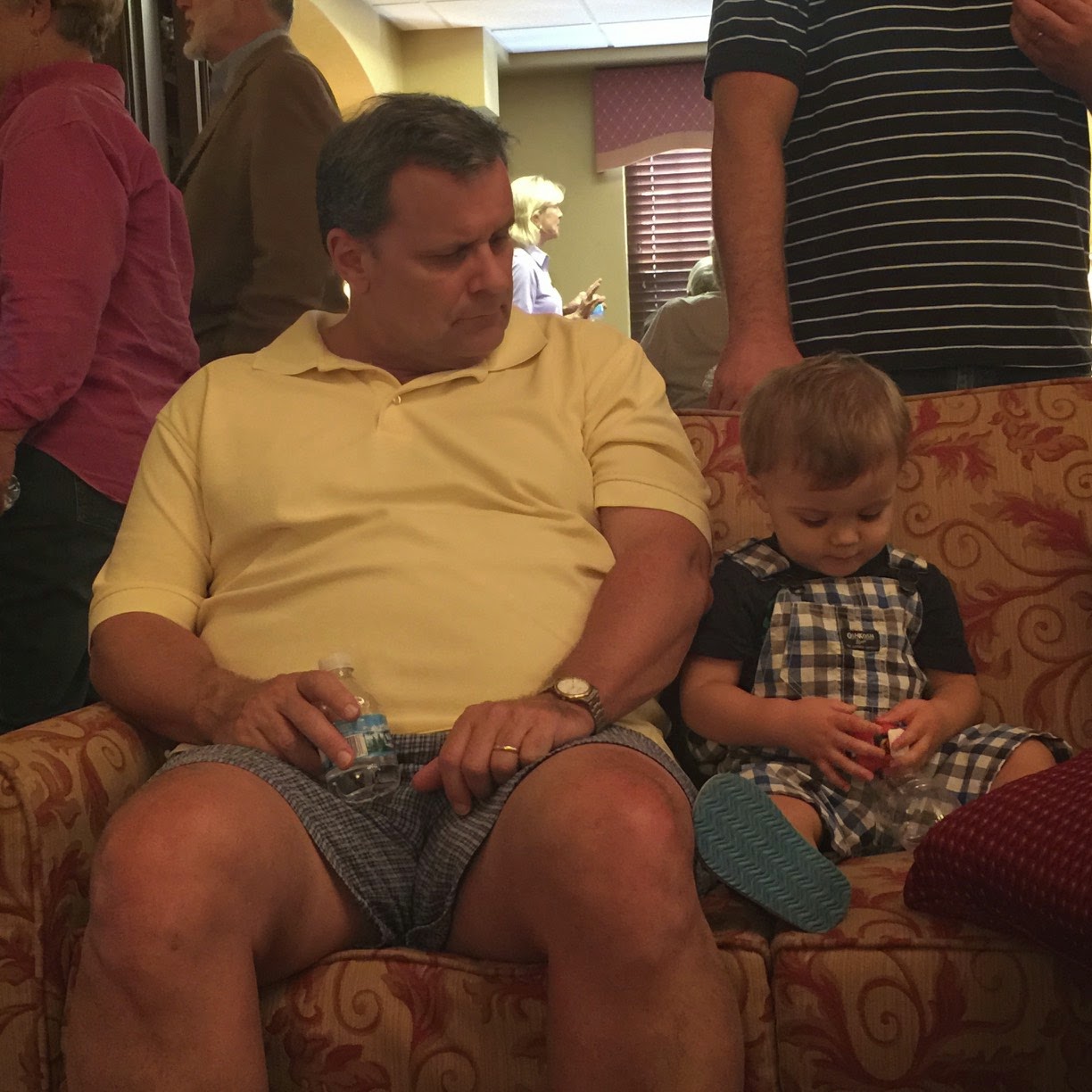 We ended this weekend similarly to how last weekend ended: we took some pics at the Mooneys with the gorgeous fall weather and colors.  Of course, my little model was willing to do anything except stand still and pose for a pic, so these were the best I got.  But aren't the colors and light great?!!  I sure love taking pictures with this camera! 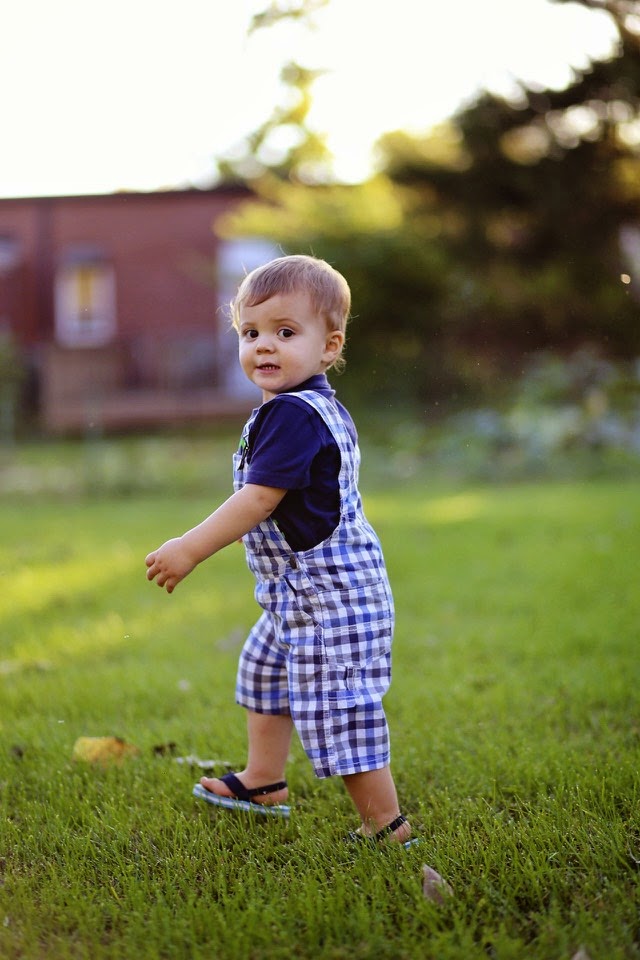 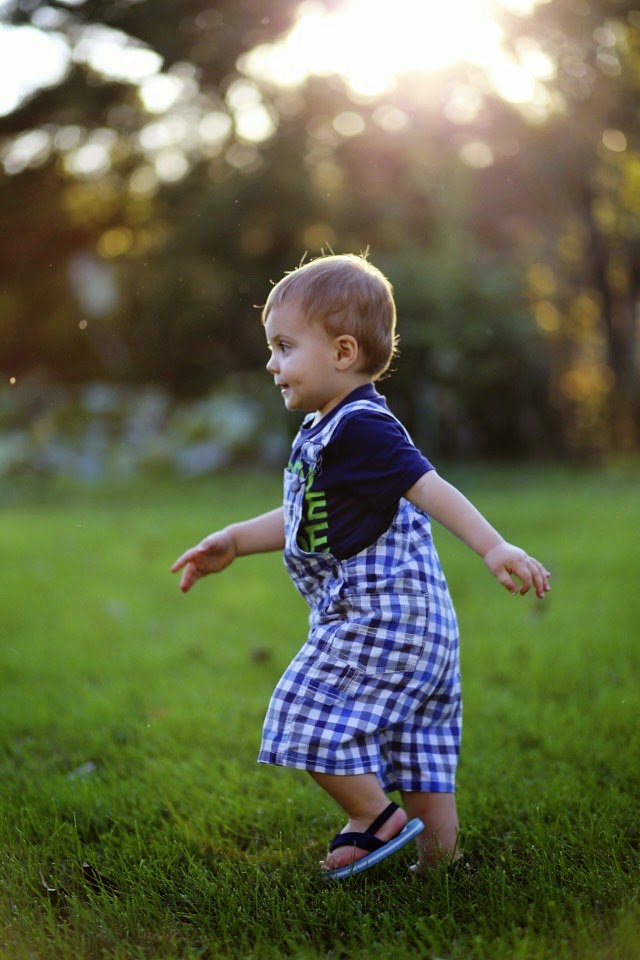 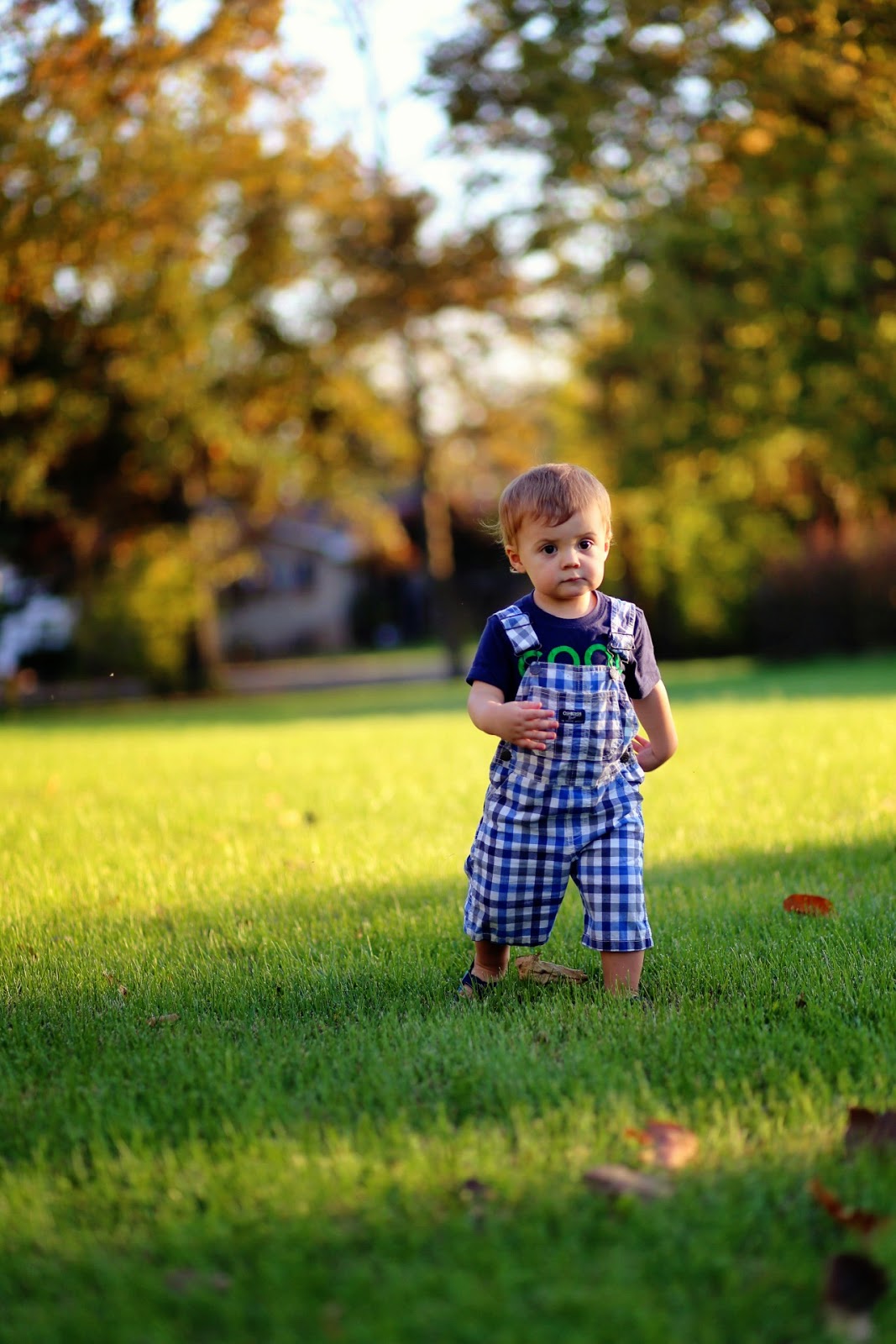 Anyways, have a great week...and I'm sure I'll be blasting your feeds and blog readers later this week with some Halloween fun--Patrick's FIRST time trick-or-treating this year and I know it's going to be amazing!  Better go charge my camera now!  Haha!

I'll leave you with this...it got quite the hits on Scooter's instagram feed...just try not to giggle :) 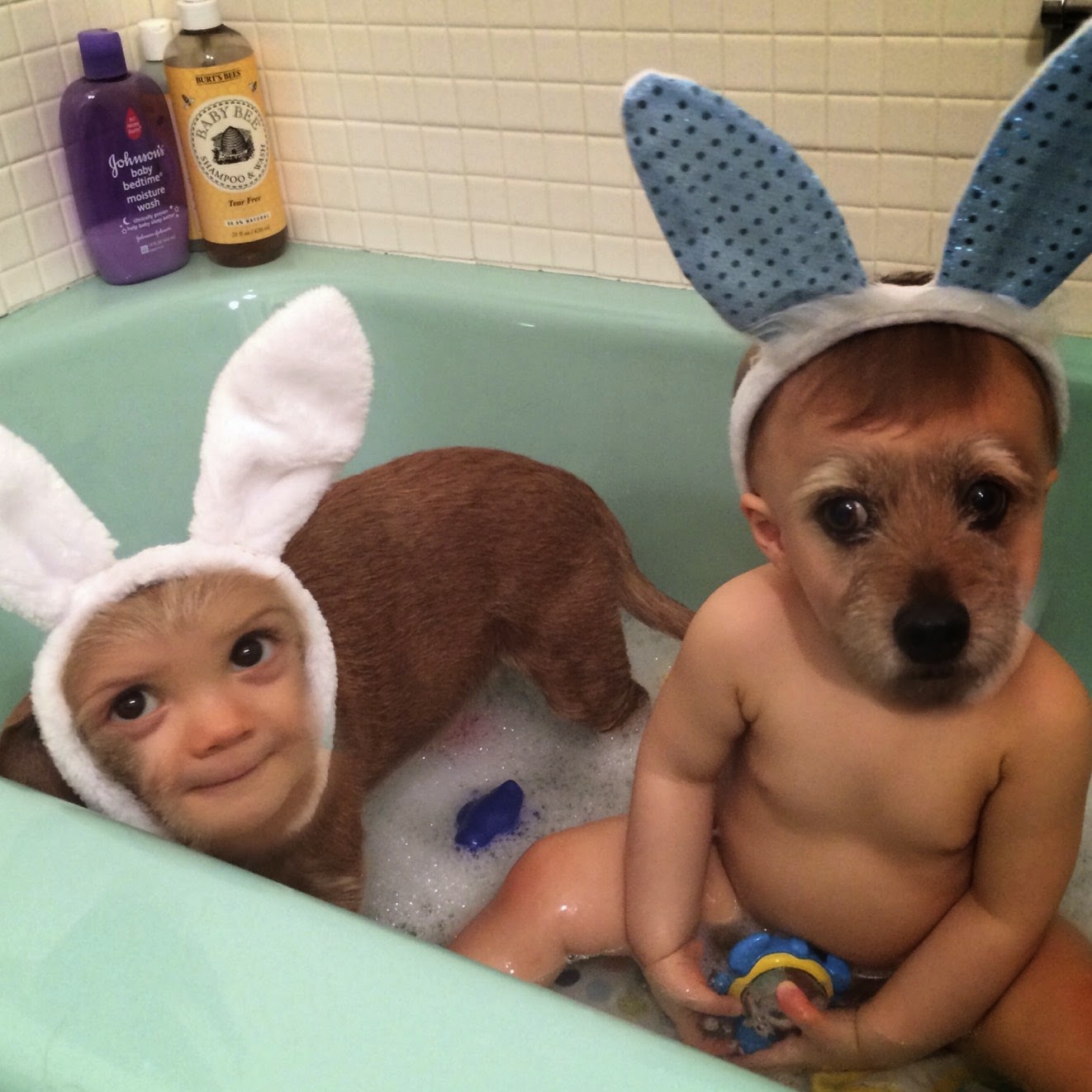