So I really have been SLACKING on my blog posts recently.  I have been good (thus far--knock on wood that that continues!) with my weekly pregnancy blogs documenting the bump, but as far as other blogging goes, I have really been slacking (or at least I feel like I have).  However, I have a reason (or excuse, cause don't we always have an excuse for everything?!!): my Mac has been on the fritz lately...like, to the point that I don't even want to open it when I'm at home because it takes forever to start up, and then whether it's the internet or a photo editing program, it takes SO LONG to open--and that's if it doesn't get locked up and freeze in the process and I have to force quit.  Ughhhh.  It's been awful, so I've totally slacked on blogging because it was such a headache to actually OPEN anything to get anything done.  And when I've had photoshoots and needed to edit the pics afterwards...ughhhh.  That was a nightmare as well: it would take Lightroom F.O.R.E.V.E.R. to open, and then after I finally got it running and needed to export the watermarked and full size versions of the pics, I literally could not do anything else on the computer until it was done or else it would lock up (and sometimes it'd even lock up when I wasn't doing anything!)--so.darn.frustrating.  That MacBook was only 3 years old (I had my last MacBook for 6+ years); however, I run a TON of very heavy programs (Photoshop, After Effects, Lightroom, Aperture, etc...) and my poor MacBook wasn't having it.  I had finally had enough, and complained to Mike and he told me to just got buy a new MacBook (which he's been using a Chromebook since I started at UA, and I think he hates that and would rather use a Mac...so I'm sure he was willing to get me a new one because that meant he got the old Mac back to himself, which will be perfect for just the Internet browsing he primarily uses a computer for)--and make sure I get one with all of the features I actually wanted, and not just getting one to settle with (isn't he amazing?!!), so I did, like 5 seconds after he told me that. 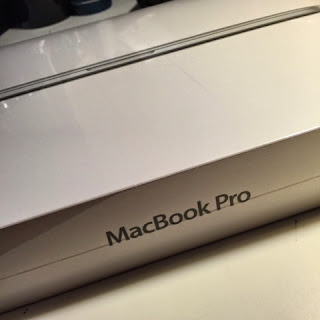 I ordered it last week and it came today, and I feel like a new person: this computer is ah-mazing!  It is so unbelievably fast (I upgraded to have 16GB of memory, 3.0GHz processor, and 512GB of storage) and really blows my old one out of the water.  Knock on wood, I hope it lasts!  Thus far, all of my usually time-consuming-in-opening programs open lightning fast and makes me oh-so-happy.  I cannot wait to save sooooo much more time in editing and actually doing the things on my computer instead of waiting and waiting and waiting (and getting hugely frustrated) for them to open.  And, of course, blog more since this computer doesn't repel me from opening it because it takes forever to do anything.  So, ahhhhh, yes, Alex is in Apple heaven (once again!) with a new device.  I hope hope hope it lasts!

So, wow, that was a much longer explanation than I planned for!  Haha!  Anyways, this would be a super boring snoozefest of a blog post if this is all I posted about...so I thought I'd do a little happenings update as to what's been going on lately besides my growing belly and babe in it!

So this just cracked me up.  Patrick screamed when I pulled him out of the shopping cart (I know, awful mom right here) and wanted to go back in.  He thought it was hilarious that Scooter was behind him--Scooter, not so much.  Either way, another cute Scooter and Patrick pic. 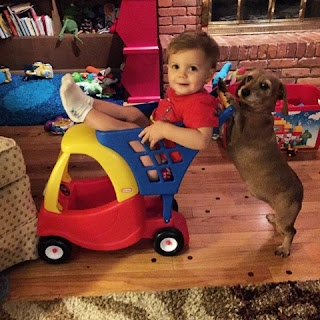 So one of our favorite restaurants is Biggies in South City.  They have an array of random pictures on the wall.  Well, one day we brought in a 5x7 framed pic of Scooter with some command strips affixed to the back and slapped it on the wall when no one was looking.  Two years later, it's still up there!  Haha!  Makes me laugh every time. 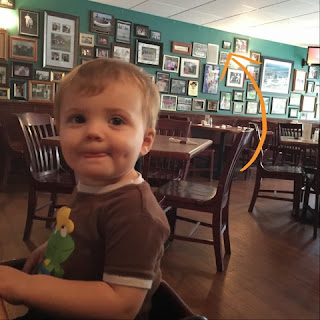 Pre NLCS game selfie with my little man.  He's becoming such a little ham, I can't stand it.  His smile KILLS me.  Yes, he will get whatever he wants out of me. 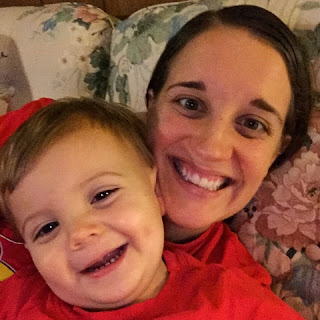 We had an exciting Friday night last week: we went to Target.  It was INSANE.  j/k.  But Patrick was his adorable little self in the shopping cart wearing his puffy vest and I just had to document it...and then share it...and now blog about it. 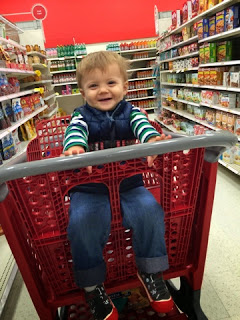 I have very few baby items that I don't have and need/want for #2.  One of them was a Tula, but I went ahead and bought one cause 1. I had a $30 gift certificate to my favorite online baby/cloth diaper store and 2. I had another $50 in my PayPal account from selling a cloth diaper, so the $150 Tula only cost me $70.  Score.  Plus, it goes up to 40-something pounds, so Patrick can totally use it until my new squish comes.  Please note: Patrick was NOT a fan (of either the back or front carry) AT ALL.  He did not like to be up in the carrier!  Probably my own fault: kid has never been carried, and I think 17 months might be a little late to start.  Ehhh, oh well.  This thing will get oodles of use with #2, I promise you that. 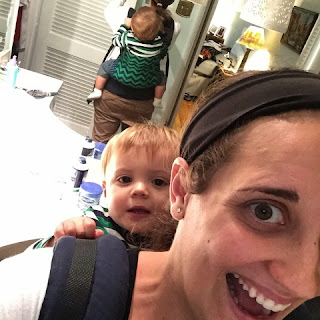 Scoots has really been trying to hit up the #howloween posts this October.  In a nutshell, Beggin' is donating one bag (up to 10k bags!!) for every picture that is tagged #howloween on Instagram or Twitter!  How awesome is that?!!  So Scooter has been doing his best to promote it with a variety of poses and costumes.  Stay tuned to his IG account--I'm sure more will be coming :) 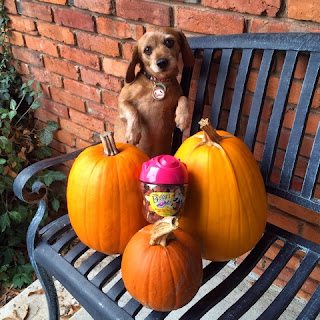 Last but not least, my school had their annual Fall Fest a few weekends ago and although Mike had to work, Patrick and I went.  I think he had a great time!  He got to meet the Ursuline Bear (who he loved) and ate a lot of delicious treats, and got to run around like a crazy boy for 25 minutes in the very park-esque front lawn (spoiler: we both took a nap after that! haha). 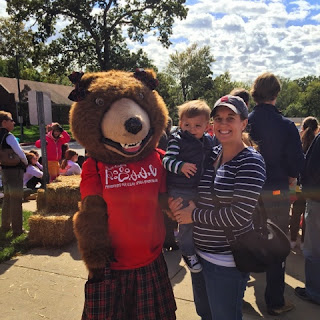 So yeah, that's about all of the tid bits that have been happening lately!  Mike's been working like crazy, primarily due to all of these protests and such going on in the city (don't get me started on that...maybe I'll do a blog post at a later date with my thoughts and such on that...maybe...we'll see.), so we haven't seen much of him, so that sucks.  I really hope everything dies down and he resumes his (as normal as a cop's schedule can be!) normal schedule.  Fingers crossed.

Until then, have a fantastic day/evening/morning/whatever.  I don't know when you're reading this...so end or start your day on a high note :)