WHY IS THIS MY THIRD (and hopefully final, #fingerscrossed) POST ON THIS AWFUL SICKNESS MATTER?!  And yes, that is me screaming at you in all caps.  Gahhhh.  So over this.

Anyways, I posted this and this already about the plague that is seemingly ripping through our house.  Okay, not really, but it's been keeping Patrick on a rollercoaster for a'many days (like almost 2 weeks. dear lord.) of feeling fine, then sickness strikes again...sometimes riding this rollercoaster of good-not-so-good feelings multiple times a day.

Not gonna lie, I am exhausted.  I think I'm more tired now than I was ever at the newborn stages with Patrick or Rose--and maybe that's because those stages you expect to get no sleep--but boy, I've been literally waking up to my alarm all week long, which never happens with me (I'm always a 10 minutes prior to alarm sounding waker-upper).

Anyways, let me backtrack a bit.  After I posted this little update on Monday, I was convinced, after a visit to the doctor, Patrick just had a bug and was on the mend.  Stupid me.  Because Monday night into Tuesday morning was the WORST night we've had in our short history of parenting.  It.was.awful.  To give you an idea, here's a fun little convo from earlyyyyyy Tuesday morning with my mama: 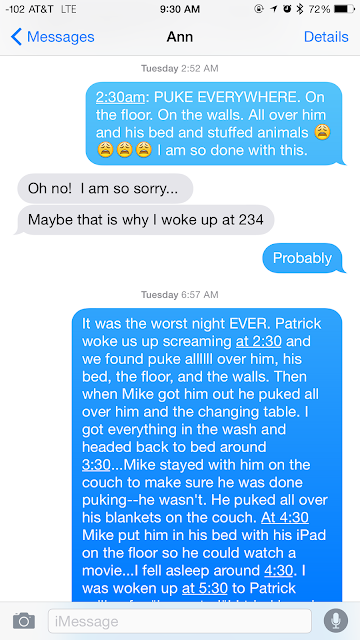 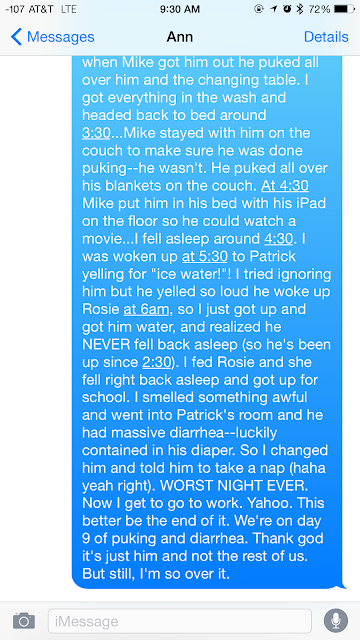 SO.OVER.IT. So that was Tuesday morning and I went into work a zombie and worried about Patrick, cause that was the most puke EVER from him.  Luckily Mike was home so that good (and the only reason I went into work)...but at 11:45am, Mike called me (which is rare, he never calls me at work, just texts), and says, "Um, Patrick has a rash all over both of his legs."  Me: WHATTTT?!! Send me a pic.  So he did.  And it looked awful.  So I called the doc, left my classes with what they needed to do the rest of the afternoon, and raced home to this: 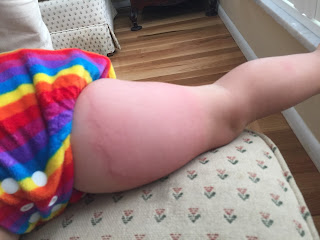 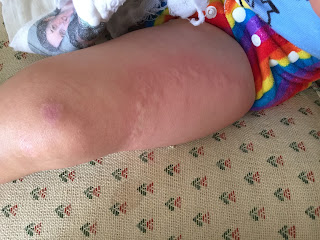 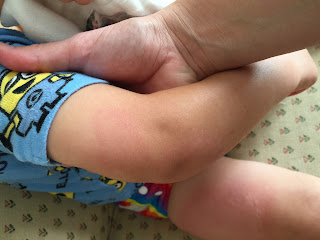 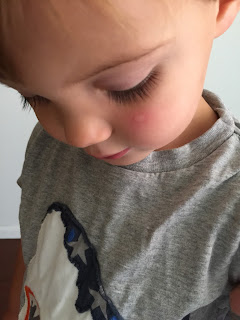 Mirror-imaged rashes on his thighs, then a spot above his elbow and then under his eye.  It looked like hives, but I wasn't sure--and it was spreading.  Fan-freaking-tastic.  So I called the doc and they told me it was probably a reaction to his virus, but to bring him in (a secret back door entry, cause he had a rash!) immediately.  So I whisked him up and took him in...which, I should add was at 2pm, right in the middle of nap time, and this kid had been up since 2:30am (and I think dozed off from 8:30am-10:30am before Mike woke him up), so he was in a super great mood.  Not. 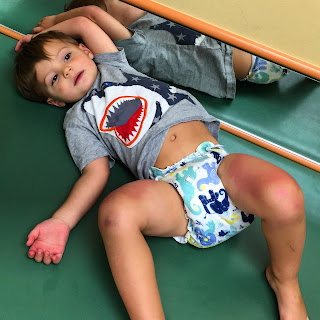 He was not into waiting for the doc at all, he just wanted to walk out of the room, as is his usual jam when we go to the doctor.  Anyways, I snapped a few pics of him and his rash (which had continued to wrap around his legs and make his palms of his hands super red) and sent them to my mom and Mike while waiting for our doc to come in. 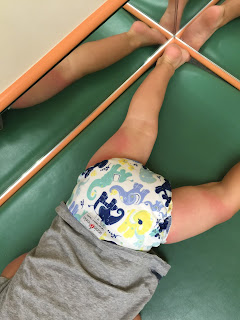 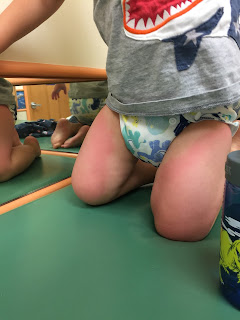 When our doc came in (and surprised to see us again since we were just there 24 hours ago!) she took one look at his rash and said it was hives--or a giant hive on each leg, elbow, and face.  What's weird though, and she said she's never seen anything like this in her years of practicing, is that it was an exact mirror image hive on each thigh--she even called in a few other docs to take a look at it.  But she reassured us that it was just Patrick's body reacting to whatever virus he has and its way of pushing it out (hopefully).

She was concerned that he was on day 9 of puking/diarrhea, so she wanted to get some stool cultures done to see if it was something more than just a virus that would need to be treated accordingly.  Once she explained the collection and lab drop off process to me (which I'm leaving out the details cause they're beyond TMI) and gave Patrick a dose of Benadryl, we were on our merry little way. 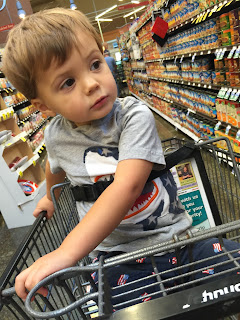 Our doc suggested we still keep him on a bland diet, so we ran next door to the grocery store to pick up Jello and popsicles for dinner.  Patrick was clearly enthused about our adventure.

Once we got home, he kept asking for "milk peasss!"--and our doc said to keep him off of dairy for a few more days, but could try soy milk or breast milk...so I thought I'd be sneaky and give him some of my milk in a cup. 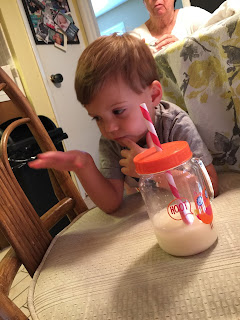 He's no dummy.  One tiny sip and then he did this, and proceeded to whack the cup across the kitchen.  Lovely.  4oz of mama's milk wasted!  Thanks dude.

Anyways, it was about dinner time so I saddled both kids up and Patrick had popsicles, Jello, and crackers while I had tortellini (which he really wanted and kept telling me that).  Rosie had a siesta, as is her usual dinner time jam as of late. 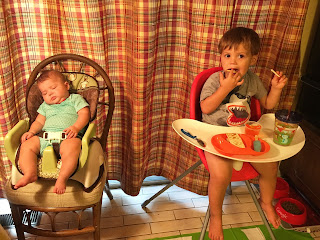 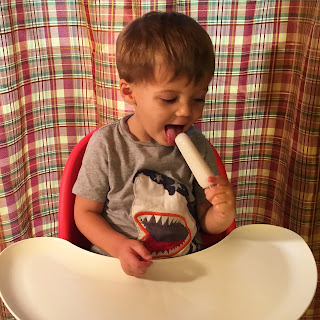 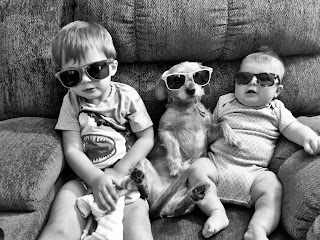 Patrick seemed to be feeling better (and let me snap a cute little sunnies pic with Ro Ro and Scoots)...minus another #2 episode (which allowed me to collect that lovely stool culture. #joysofmotherhood), but I wasn't getting my hopes up.  Since he didn't have a nap that day AND woke up at 2:30, dude was tired.  I gave him and Rosie a bath--and noticed his rash was alllll over his tushy and back (I'll spare you the pic of that :), which our doc said could come and go in different spots for the next several days, so more Benadry did he get!  After baths I set Rosie down and put Patrick down in his bed a little before 8pm.  Literally, from the time it took me to turn his lights off and shut his door to sit down, grab Rosie to feed her and my phone to check on him, he was out.

I was preparing myself for him to wake up screaming covered in puke in the middle of the night..but luckily (for the past 2 nights!) that hasn't happened!  WOO HOO!  So maybe he is on the mend?!  I'm being cautiously optimistic about that...because allllll last week he was fine (minus diarrhea) until another puke fest on Friday night.

I'm hoping and praying he is on the mend.  We hopefully will have his stool culture results back soon...and hopefully those will shed light on what he has/had.  Stay tuned...or not...cause hopefully this will be my last plague post for a long while (or forever would be nice too).  Stay healthy my friends, and hug those little ones tightly!
Email Post
Labels: doctor's office hives Patrick plague sick