While Patrick was off having the time of his life with his KiKi at her lake this past weekend, Mike and I were holding down the fort at home with one child...which was so weird and quiet.

Mike and I always say how much of a vacation it feels like when we just have ONE kid to worry about...whether it be Patrick OR Rosie...so this weekend was like a little vacation for us!  Having to just worry about one cucumber--and the one that is currently the easiest and non-mobile was a crazy welcomed break to get some stuff done...cause Mike was off all weekend too!

Saturday was super relaxing--I hit up Target solo (!!!) in the morning, we had lunch with some friends, and then we all took siestas (not really, Mike and Rosie did, I got stuff done around the house!) before I headed off to my photoshoot in the late afternoon--which turned out really well, by the way, despite the predicted icky weather. 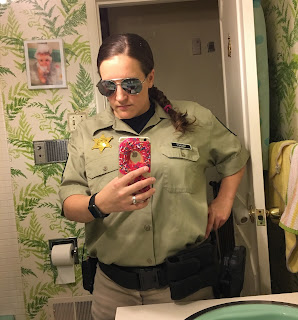 Rosie was getting to have her own sleepover at the grandparents cause Mike and I were off to my aunt Monica's annual Halloween bash!  This year we went super original with costumes: cops and robbers.  Actually, I was suppose to be this gal from Reno 911 (Kimball) and Mike was my prisoner.  I was pretty jazzed about my costume, because 99% of it was legit police gear.  My {fake} gun even looked real. 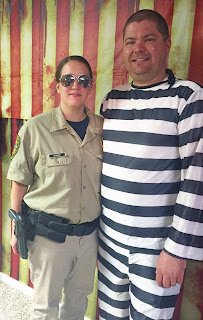 We had so much fun at the party, as usual.  Monica's theme was some kind of creepy circus (no me gusta clowns) and she, once again, went above and beyond with her over-the-{big} top (see what I did there?! haha) decorations and food. 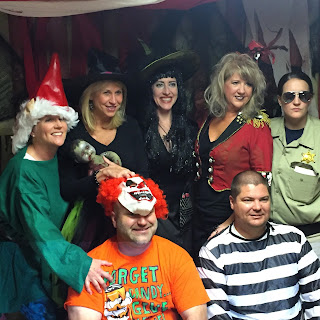 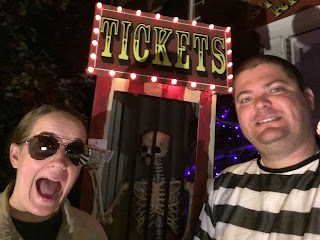 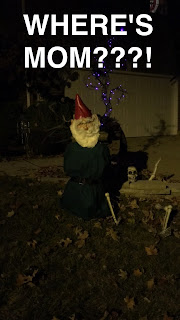 My mom was a gnome...and she sat in the front yard and I snapped this pic and it was so darn funny.  She's a riot, isn't she?!

Anyways, Sunday morning I picked Ro Ro up from the grandparents and we decided to take advantage of both Mike and I being off ANDDDDD not having a crazy 2 year old running around, so we YOLO-ed it and lived big...we snapped a few pics and off to Aldis we went. 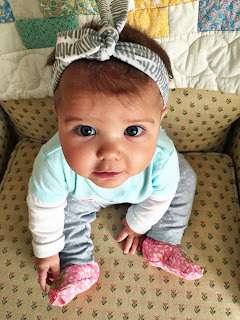 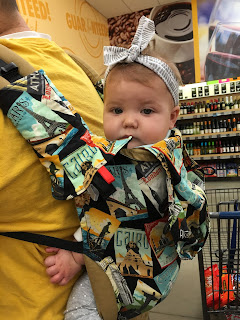 BUT WAIT!  We were feeling REALLY adventurous and ambitious so we decided to install Patrick's new carseats in both of our cars, which meant taking his current one, flipping it around, and installing that for Rosie now, since she was getting too big (heavy) for her pumpkin seat.  Before Rosie served as product-tester, she was taking a little siesta on the couch with Scooter and it was the cutest thing EVER.  Then she woke up and used him as a table for her iPad. 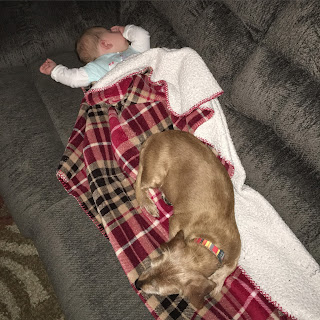 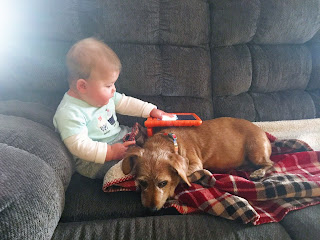 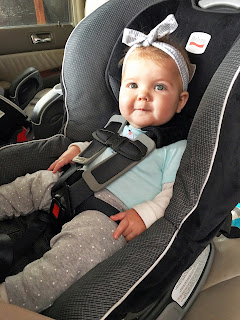 She clearly is a fan of her new ride.  6 months old she is and now in her convertible carseat, and Patrick was a smidgen older (although probably the same size she is since she's bigger than he was at this age) at 8 months when we flipped him.  Here's a lovely side-by-side since you know I'm a huge fan of those :) 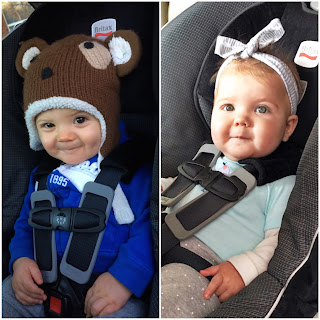 Before siestas I snapped a little teaser pic of Rosie's Halloween costume and I think I melted into a thousand pieces...gahhhh!  I cannot wait for Saturday!!! 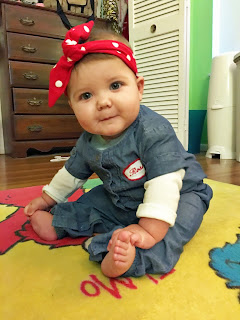 After Rosie's (and Mike's too, let's be honest) nap on Sunday, we got up and headed out to snap Matt, Katie, and Lizzy's family pics.  Now, I'm biased, but gahhhh!  These colors!  Here's a few sample snaps (the rest on my photog blog here if you're interested) from the shoot.  I have so many favorites. 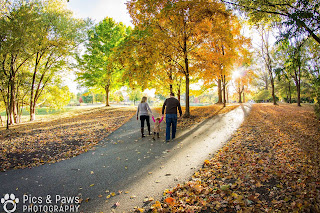 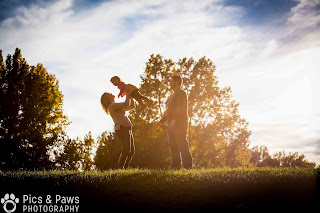 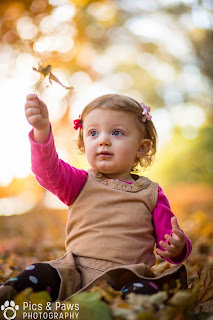 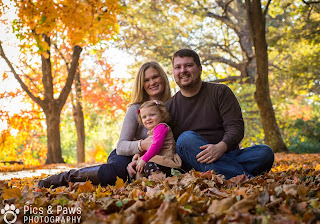 I mean, how freaking gorgeous were those colors?!  And Matt and Katie and Lizzy?!!  GAHHH.  LOVE.  One of my favorite shoots to date!  And how amazing is Mike as my second shooter?!  I love that he's wearing Rosie in the Tula AND snapping pics.  He's just the best EVER. 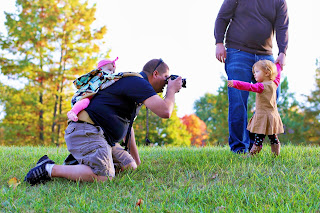 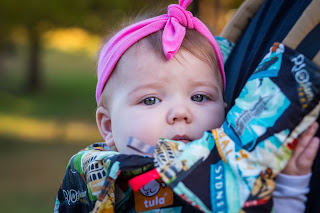 Anyways, so after their shoot we headed over to the Mooneys for family dinner.  I snapped a few pics of Rosie wearing allllll the things I swore I'd never put her in (monograms, pink, headbands galore!)... 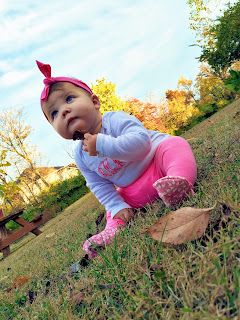 Gosh.  I could just eat her up!  Erin and Curtis came over with their niece (Curtis' sister Brittany's kiddo) as well, so we got a nieces pic of Erin and Curtis on the swing!  Game faces for everyone it seems :) 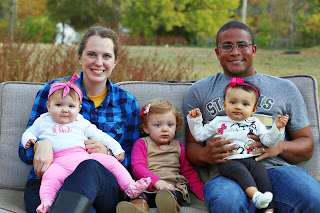 After dinner we went home and easily (so easy with just one!) put Rosie to sleep, then I edited my little heart out while watching our Sunday night favorite show: Guy's Grocery Games.  We passed out literally as soon as the DVR stopped.  Mama was tired. 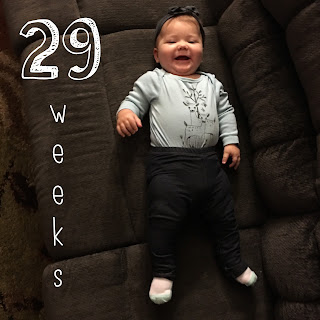 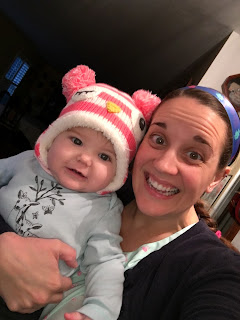 Ro Ro is 29 whole weeks old today...and minus a few early smiles, her true colors shined through when I put her in the car with an epic resting bitch face pic to start off this Monday.  Ha.  Have a great week friends!  --Hopefully better than Rosie's started off :) 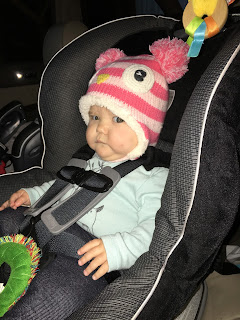