I felt like this needed to be a post entirely in itself...because I've been taking about it here on el blog for a good time and finally, a week shy of her 8 month birthday, Rosie is eating solid foods!  WOOT!

I did weigh her this morning, and she was just a shade under 22lbs, so for almost 8 months Rosie has been exclusively on breastmilk and has gained almost 13 pounds since birth because of it.  She's in the tops of the growth charts, wearing 18 month clothes, and it's alllll due to mama's milk.  Not gonna lie, I do feel a bit proud of myself for that :)

Okay!  So!  Finally!  Onto solids!  With Patrick we started right at 4 months old.  With Rosie I had read some stuff and wanted to wait till 6 months, then we had this trip planned for when she was 7.5 months old so we decided to wait until we got back.  Truthfully, I think she probably should have started around 7 months old, because for the past several weeks she's been waking up in the middle of the night (between 2 - 5am usually) when before she was sleeping at good 10-12 hours before she woke up...now it's more like 8ish hours give or take when she wakes up and wants to nurse.  I don't really mind the early morning nursing sessions (actually, I kinda like it cause it's just our time and she always goes back to sleep, as do I), but boy, I'd sure love a straight night of sleep again.  So!  Here's hoping having some solid food in her belly gets her back to her 10-12 hour stretches of sleep :) 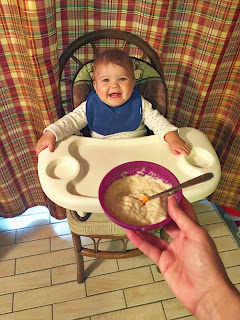 A benefit of us waiting till now is she's much more coordinated than she was at 4 or even 6 months.  This proved nicely for our first oatmeal food session this morning -- she actually didn't make that big of a mess (as compared to what I remember it was like first with Patrick!).  Plus, she's got 4 teeth (almost 6, the side top two are justtttt about to poke through). 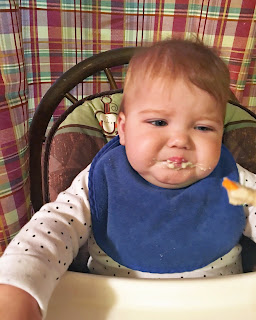 Anyways, so she didn't hate it -- I know that because 95% of it made it into her mouth and stayed there!  However, she wasn't a huge fan of just the oatmeal...which, duh, it's kinda bland.  But I don't think she really liked it.  She definitely wasn't opening her mouth like she wanted more.  But what got into her mouth stayed and she chewed it up (or gummed it) and swallowed it.  SUCCESS!

At lunch time we decided to do some mashed bananas in with the oatmeal as well and she seemed to really like those a lot more!  She ate almost the entire container of bananas (yeah, we buy baby food.  I'm too busy to make my own and I just don't care that much that I don't make it and buy it myself.  Judge away.  Whatever.)!  Again, she kept it in her mouth and didn't spit it out.

We're going to try some more bananas and oatmeal again with dinner tonight...and I'm hoping she starts to go back to her sleeping through the night again!  I mean, it's not that big of a deal, but I really think she's just hungry (a lot!) because she is big and gets fussy and irritated when she's not full (don't we all?!!)...so here's hoping that some solid foods make our big gal happier and plumper and start her on a path to eating and enjoying every.kind.of.food.out.there. just like her big brother.

OH!  And we are going to do a bit of Baby Led Weaning (BLW) as well eventually...more on that later when we start.  We're not completely doing BLW though; still doing the pureed food as well, so kinda a hybrid of both types of "solid food" eating for babies.  Riveting stuff, isn't it?!!  Ha.  I'm sure there'll be a'many more solid food posts to come oh-so-soon...stay tuned friends! :)
Email Post
Labels: growing growing up milestone Rosie so big solid food update