Welcome to my final installment of our summer 2016 kidless adventures!  Lord knows when we’ll ever have another one of these longgggggg kidless weeks to ourselves again…but regardless, we’ve thoroughly enjoyed this week away from our parental responsibilities.  However, I should make an important note: WE MISS OUR KIDS DESPERATELY.  We literally cannot wait to get home and snuggle them and kiss them like there’s no tomorrow!  Yes, this adult vacation has been nice, but it also has made us miss our kids like no other and we cannot wait to see them again.

Okay!  So!  Where did I leave off?  Ahhh, yes, we had just explored Ketchikan and Juneau.  After those two days we headed north a bit to Skagway, where we had a 4 hour photography tour booked.  We were really excited about this because, well, we’re photographers and love a good opportunity to take a picture!

My sea sickness was better the days we were in port.  My body was happy to be on solid ground and not moving…so that was a treat.  Skagway was great because even though we were in a little bus touring around the mountain and city, I didn’t get motion sick at all, unlike what I’ve been getting while on board the ship. 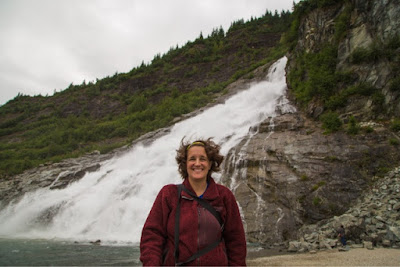 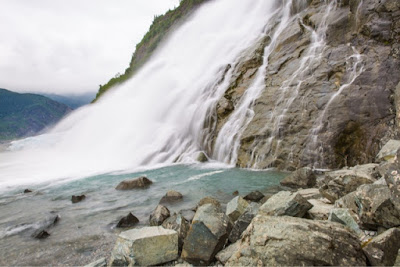 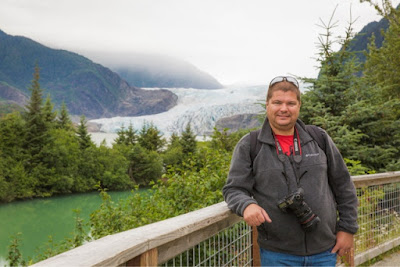 The photography tour was great — albeit a bit rainy/cloudy/misty.  However, I think that made for some really cool snaps!  Again, the Internet sucks here so I’ll just share a few snaps with you and then do a huge 200+ pic photo dump when I get home to my blazin’ fast internet.  Our guide was a professional wildlife photographer, and we actually both had the same camera!  So that was fun to talk with her about some photo stuff.  Most of the other people in our group just had simple point and shoot cameras, so it was nice to be able to talk with someone who knew exactly how to use my same type of camera.  Mike got some great snaps too — I am SO GLAD we brought both of our cameras along! 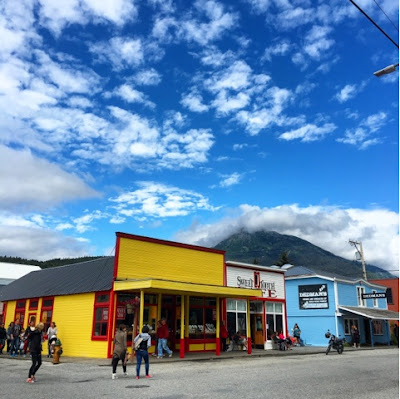 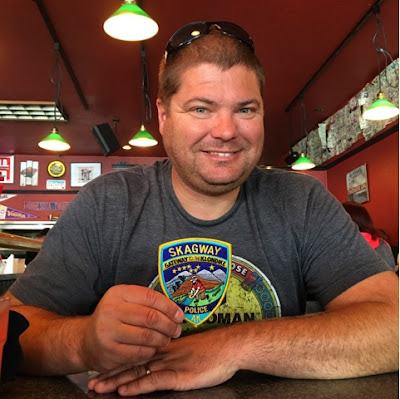 After our tour we walked around downtown Skagway for a bit, which was GORGEOUS.  What a site with he mountains in the background if this little town!  Mike found the police department and traded a patch — he was totally excited about this.  This is his furthest away patch he’s gotten yet!  Woot!  We had lunch at a little bar and grill (a welcomed treat from being off the boat!) and then headed back to the ship before we departed.

We left Skagway at about 5pm, and were going to be at sea for TWO FULL DAYS before getting into Victoria around 6pm on Saturday night.  Um, I was DREADING THIS.  And, for good reason: Monday when we were at sea was ROUGH and my body did not handle it well.  Well, the same proved for these two days at sea: it.was.miserable.  The buffet (where you eat breakfast and lunch) is on the 15th deck and I don’t know what it is with that particular location, but every.single.time. I went up there I felt like I was gonna barf.  The smell coupled with the intense movement I felt made me so so so sick.  So, I quickly banned that from my itinerary —I WOULD NOT go back up there.  Instead, I spent the majority of these 2 days, not kidding, in our room.  I felt SO SICK most of the time and the only way I felt better was to lay in bed.  Thankfully I had just gotten a brand new Nook (e-reader) and was fully taking advantage of that and getting some intense reading done, and there was one channel that kept switching between HGTV, Cooking Channel, Food Network, DIY, and Travel Channels which also kept me occupied.  Mike kept saying he felt bad, but I told him to NOT TO and go enjoy his time on the ship, which he most definitely did with my brothers, Erin, and my parents.  I’m glad they had fun!  As much fun as I’ve had on this trip, I don’t think we’ll be going on a cruise again anytime soon.  The sea sickness has almost trumped everything else we did. 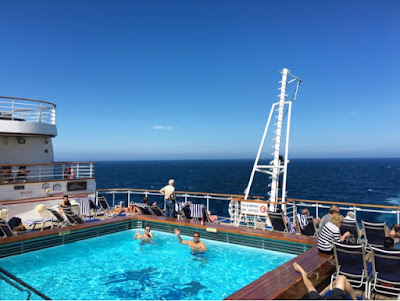 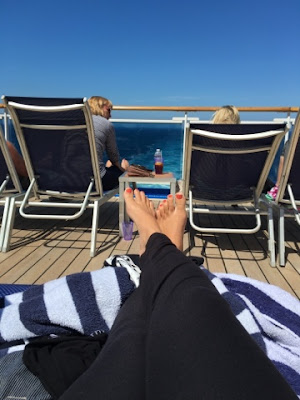 Anyways, minus the sea sickness, which was at bay always at dinner time (we ate on the 5th deck in the middle of the ship, which I think totally helped me not feel the movements of the boat), we really enjoyed our family dinners together.  We had the BEST waiters — we ate at the same dining room and table every night and loved having these two fellas serve us!  It really was a blast and we were so glad we got to meet these two dudes.

When we embarked in Victoria (Canada) we had ONE last tour planned, which ironically all 7 of us signed up for the same one: fireworks at Butchart Gardens!  I was excited about this, especially since we missed the fireworks on the 4th of July this year.  However, HOLY CROWDED.  Apparently 600+ other people from our cruise were going to, so that made for a very busy evening.  The bus there took us nearly an hour, and when we got off I felt like I was gonna puke (what’s new?!!) — this time from the winding hills and up and down roads.  Not a good start. 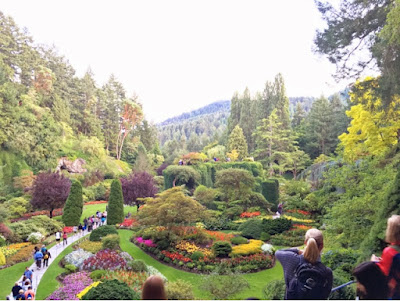 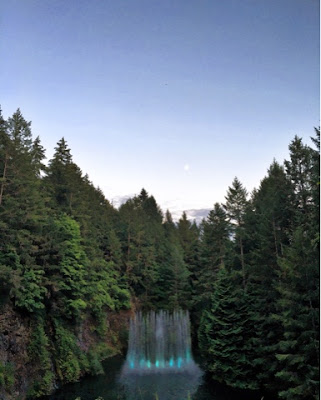 We didn’t get to the Gardens until 8:30pm (we gathered to leave at 7pm!!), and had to be back on the bus in 2 hours.  Ugh.  We walked around for a bit, but the sun was setting fast and you couldn’t see too much.  Honestly it was a lot like the Botanical Gardens back in STL.  By 9:45pm we were settled in (along with thousands of other people too) to see the fireworks, which were different than the kind we have back at home but still really neat.  We then booked it back to the buses, which took another HOUR plus to get back to the ship.  Needless to say, by midnight when we got back into our stateroom, I was beat.

But we’re finally back in Seattle on dry solid ground (yay!!!), I’m still feeling sea sick even though we’re not moving (boo), but we’re so excited to get home and see our kiddos!  I’m just hoping and praying for no flight delays or other hiccups along the way.