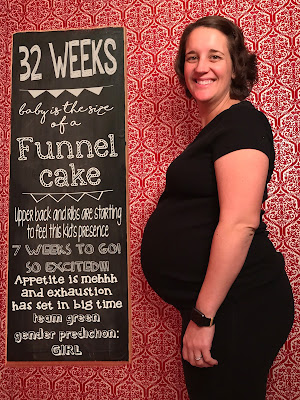 Seven.weeks.to.go.  Yep.  You're getting a weekly (and probably soon daily) countdown from here on out.  #sorrynotsorry.  I actually only have 5 (!!!) days of school left for 2016 and then just 13 days when we come back in 2017 and OMG I cannot believe it!  Seriously flying by.  I'm having mild anxiety about starting 2017 and making sure I get everything covered and started with my students before I say buh-bye and go have a baby, but I'll just put off worrying about that until after the holidays. Small victory last week: it was flippin' cold (or IS flippin' cold...still!) here in STL and I managed to get my jacket zipped over my belly!  Nevermind I could hardly breathe then, but whatever.  IT.ZIPPED.  And I was warm.  So yay for that. 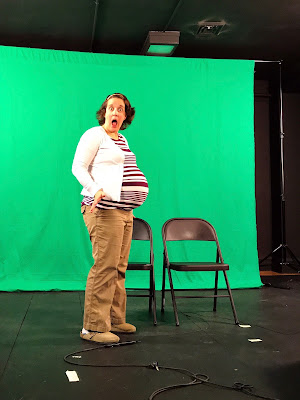 So!  What's new at 32 weeks?!  Nada much.  Kinda the same old same old.  I was in the broadcast booth late last week helping some students and totally realized the camera adds way more than 10 pounds (hehehehe).  My back (upper back really by my shoulder blades) is starting to kill me and I'm literally about to make a massage appointment for January so I can get all relaxed before #3 comes.  My ravenous hunger really has been at bay lately -- nothing is really making my palette water and wanting me to rush out and eat that ASAP, so I think this one is really taking up a lot of space in there.  In addition I think he/she is sitting pretty high because it's oh-so-hard to catch my breath after walking up a flight of stairs or anything like that.  And I have oodles of pressure all up on my ribs.  Yee haw. 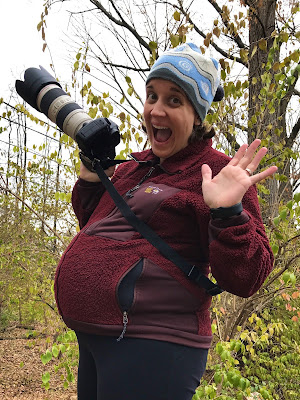 I did have a FREEZING COLD outside photoshoot this weekend and I was so jazzed that I was able to snap it no problema + my coat still zipped.  I plan on snappin' pics up through delivery day, so even though I'm getting bigger I'm still taking people's pics who want them and I think I'm doing a pretty good job of it, despite my 8 months pregnant frame.

So!  That's about it!  7 short weeks to go and we'll find out what this kiddo is and you don't have to read this (probably, I'm sure) oh-so-boring weekly updates anymore...until the next kid!  Ha!  Until week 33 peeps, adios!