*Disclaimer: lots of semi-graphic pics in this post...if it's not your cup of tea (ahem, mom), why don't you skip this post?! Cliffsnotes version: Patrick fell off the climbing wall at school and needed 7 stitches in his chin.  He's totally fine.

Ahhhh, what a day!  I should say this post comes almost exactly a year after this post I wrote with eerily a similar title.  I'd be okay if I didn't have any more of these posts for a while or ever.  They are not fun to experience.

Anyways, Wednesdays are "free" days -- meaning Patrick is at school, my mom has Rosie, and Mike is free of childcare (cause I have Annie).  We decided on this Wednesday that since Mike was off and our cleaning gal was coming I would run some errands with Annie then go take my friend Robyn's new baby Sheldon's newborn snaps and Mike would go swimming, to the dentist, then do our taxes.  We'd maximize our day relatively free of kiddos!

Wellllll, I should have known things wouldn't have gone to plan cause we just had things TOO planned out to go smoothly.  About 11:45am, after I had just finished running errands and having lunch with Robyn before newborn pics (and Mike just got done with the dentist and was literally sitting down to do our taxes) Patrick's teacher calls and says he had an accident -- he fell off the climbing wall (which is really like 3 feet off the ground) at school and hit his chin and may need to go get it looked at.

I called Mike and he said to bring him home so we could both look at his chin and make the call, cause sometimes things look worse than they really are.  I agreed.  So I drove to Patrick's school with Annie in tow and... 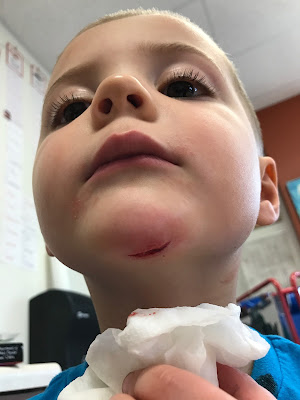 GAHHHH!  It was a nasty gash on his chin.  I immediately knew that it needed stitches (looking at his clothes that were covered in blood and towel that was still sopping up the blood coming from it) and called Mike back after sending him this pic and told him we were going to MOBAP's Children's ER -- that this needed to be looked at by a pediatrician not just an urgent care.  Mike agreed and said he'd meet us there. 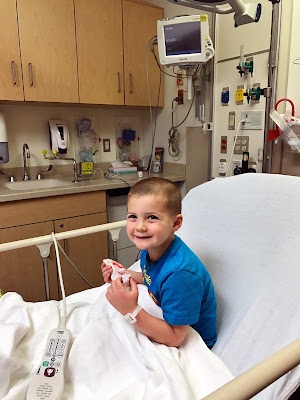 We immediately got seen and put in a room -- like no waiting at all which was wonderful! -- and the nurses came and evaluated him and sent the doc in.  The doc said he definitely needed stitches, probably 7 of them, and was going to put some numbing gel on his chin and that needed to set for 30-45 minutes and then she'd start the sutures. 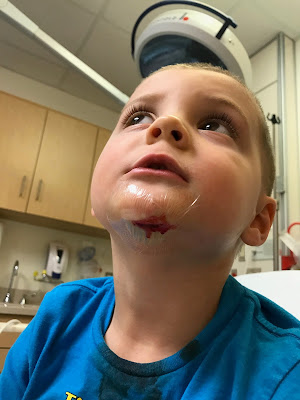 This was the most waiting we did -- we had to wait for the gel to numb him up so he wouldn't feel the lidocaine shots they needed to give him in the incision...fortunately there was a TV in the room with Paw Patrol on so that held someone's attention. 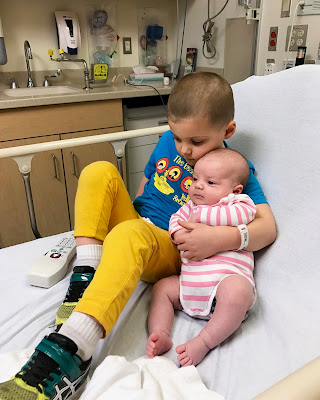 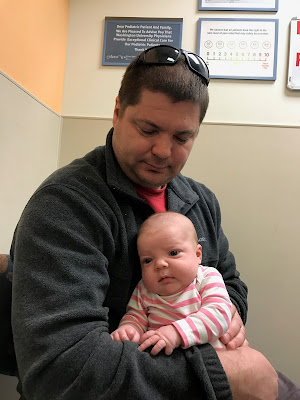 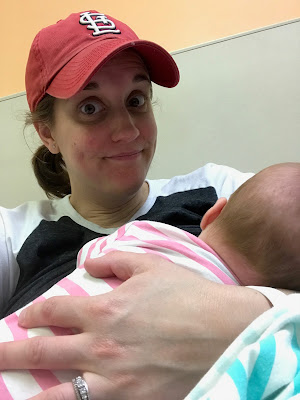 Everyone got Annie snuggles!  She was a trooper too, but not nearly as good as Patrick was!  He cried when it happened, but didn't shed one single tear his entire time in the hospital.  I was so proud of him!  Because just looking at his gash made me want to cry so I can't imagine how bad it hurt him.

After 45 minutes or so they were ready to sew him up and wrapped him in a blanket to "swaddle" him to keep his arms down.  It's funny because they probably didn't need to do this -- he was calm as a clam and didn't move or anything the entire procedure!  The doc and nurses kept commenting how amazing and brave he was and they couldn't believe he was only 3.5! 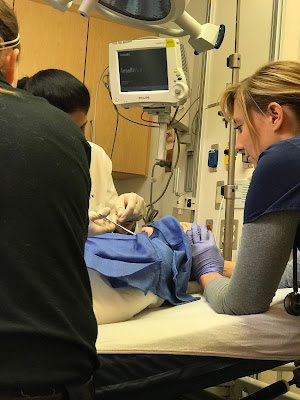 They asked Mike if he wanted a pic of the stitches before they put the glue over it (to really seal it closed since it was so gapping open) and steri strips and DUH! Of course he snapped a pic! 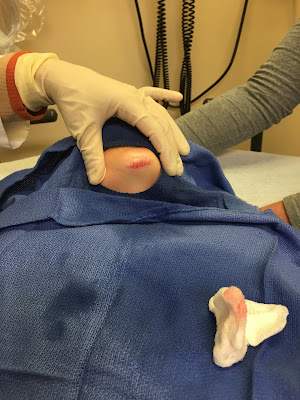 Once Patrick was all bandaged up, he got a popsicle and (not pictured) a new stuffed Clifford dog! 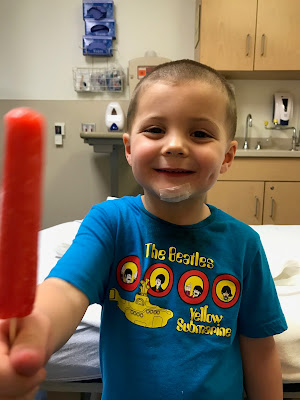 That smile was not fake -- he was so proud of himself for how brave he was and his sweet reward for being so good.

Once we got home he was running around like his crazy self -- and me, of course, kept telling him to slow down and gasping with how he was running and playing cause I could just see him falling and busting open his chin AGAIN.  Guess that's mom worry for ya. 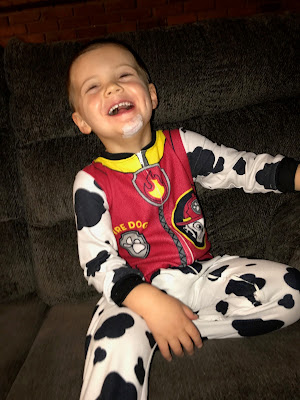 This brave dude was literally all smiles the rest of the day, no complaining at all about his chin, and couldn't have been happier.  You would never have known he was in the hospital just a few hours before!

Fortunately the stitches he got are dissolving ones so we don't have to take him back to the doc...and he can go swimming in 8-10 days, which is perfect timing since he leaves late next week for spring break -- he and KiKi are going to Florida!  Can you imagine trying to keep this fish out of the water in Florida?!  Would not happen...so glad he'll be cleared to go swimming as soon as he reaches the Florida state line.

Anyways, that was Wednesday's little escapade with Patrick and the climbing wall (which won this round).  His teacher was sooooo sorry and apologized a thousand times and I kept reassuring her it was no big deal, these things happen, he's a kid, and I'm shocked it took us this long for a legit injury to happen with him.  I hope this is our last ER trip for a while with any kid -- cause even though he was all smiles and so brave, my mama heart does not like seeing my babies sick or injured!
Email Post
Labels: brave chin ER hospital injury Patrick stitches strong tough