Today we took Patrick to his very first movie in the theaters: Minions.  To say I was excited was an understatement: I was sooooooo giddy to take him!  Obviously I had no idea how he'd act: if it was anything like he does at home, we weren't gonna last through the entire movie.  BUT!  I figured we'd try it anyways and hope for the best, but prepare for the worst.

My lovely aunt Mary came over to stay with Rosie while we took Patrick to a morning movie.  I put on his minion shirt he had, and put mine on that Mike bought me last summer.  Mike, still in his PJs, jokingly said he felt left out that he didn't have a minion shirt.  He went back into the bedroom to get changed just as my aunt Mary got there.

Well, a few minutes later Mike walked out wearing this: 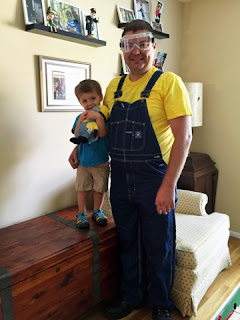 OMG!  He was dressed just like a minion!  Patrick LOVED it and kept saying, "min-in" and pointing to his daddy.  I was dyingggggg.  So naturally I snapped a pic.

I assumed Mike would go change, but oh how wrong I was!  He said he was going to wear his entire outfit, goggles and all, to the theater.  I'm pretty sure I fell in love with him all over again.  What an amazing dad to do that for his kiddo!  Patrick was in heaven, and kept telling Mike "min-in".  It was so darn cute. 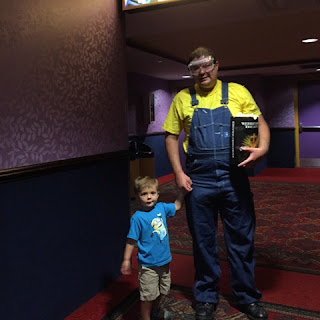 Once we got to the theater we bought some popcorn and an Icee (my fave and staple movie-going treat, even if it was 10:30am) and then grabbed our seats, with Patrick situated in between us. 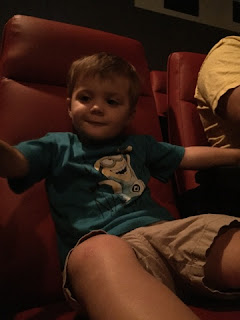 I was skeptical how long he'd actually last sitting down in the chair.  But he was completely mesmerized by the "tee-veeeee" in front of him and in heaven with my Icee and some popcorn with M&Ms, he pretty much sat exactly like this without moving the entire movie.  Cue shocked face emoticon from me. 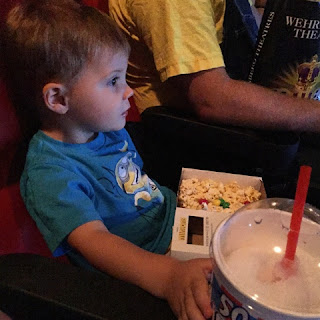 About 10 minutes before the movie was over (and his popcorn and Icee had run out) he wanted to stand up and lean over the seat in front of us to watch.  Luckily no one was there so it was okay, but then he wanted to pace for a bit too.

The movie ended just as it was obvious he was getting stir crazy (he sat in his seat for over 90 minutes before he moved so I'd say that was pretty darn impressive!) and we departed.  He loved the movie a ton--kept saying, "min-in mooooo-veee" the whole way home.  We were so happy he liked it and more so how well he did at the movies!  We will most definitely be bringing him back!

This very successful movie-going experience makes me optimistic for a week and a half from now when we take him to his first Cardinals game.  Hopefully that'll be as good of an experience as this one!  Fingers crossed with that...and you know I'll blog it! :)
Email Post
Labels: best dad ever dad family family fun first Mike milestone minions movie Patrick theater