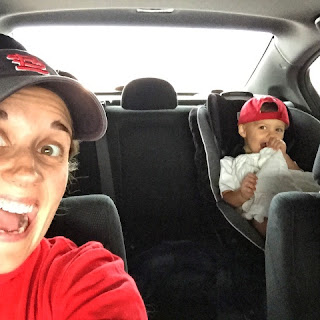 Yesterday evening Mike and I took Patrick to his very first Cardinals game EVER!  My lovely mother-in-law came over to hang with Rosie (and Scoots) and put her to bed so the three of us could go.

Now, we had yet to take Patrick to a game because 1. all games are during nap or bedtime 2. when he was really little it was just too hot, even if he would just sit there (and back to reason #1) and 3. we didn't know how much he'd get out of it/how long he'd last/didn't want to lose money on a ticket.

Soooooo parents of the year here waited and waited to take him to his first game.  Well, if you recall from my Pooches in the Ballpark 2015 post earlier in June, Scoots won the costume contest and scored us free tickets for a future game!  So I got tickets for an evening Mike was off and hoped and prayed it'd go well...but, was prepared it wouldn't, and was okay with that since we didn't paid nada for the tickets.  A win-win really :) 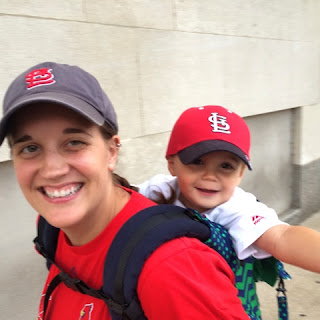 It literally POURED cats and dogs in a crazed pop-up thunderstorm on our way downtown.  But, once we hit the exit ramp it stopped and the sun came out and it was a nice, muggy 95 degrees out.

Everyone knows how much I looooooove wearing Rosie in my Tula, well, Patrick missed this ship when he was a bebe and didn't really get any ups.  Well, since we have two Tulas, and Patrick is still well-within the 45lb. weight limit, we decided to saddle him up in it for our walk from where we parked to the stadium.  Um, GENIUSSSSSSS idea Alex.  Seriously.  For a kid who had never been worn before, he really liked it actually and was so good in it!  Man, it made our walk to (and from) the stadium a breeze, and we didn't have to worry about Patrick darting into traffic or walking too slow.  I am loving baby (and toddler now!) wearing more and more every single day, and these Tulas we have are becoming lifesavers.  I think they will be my new go-to baby shower gift for the future...so friends with future babies a'coming: take note :) 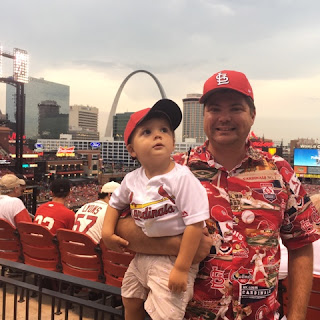 So once we got to the game, Patrick was in HEAVEN.  Seriously.  He was looking around with big huge eyes and wouldn't even look at me for .2 seconds for a picture.  He was just so taken with the stadium and everyone and everything there he was speechless.  Ha!  Literally. 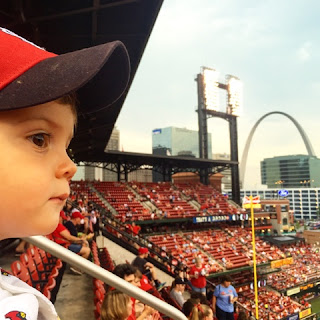 Since we had free seats, they were super duper high up, but it seemed that Patrick liked that!  When we first sat down (right as the game was starting) he was completely mesmerized.  He kept saying, "bay-ball!  bay-ball!" and clapping.  It was so cute. Luckily we had some empty seats around us so Patrick got his own seat in between us.  After about 10 minutes of his initial "wow" factor at the game, the luster of the newness of a new place wore off and someone wanted to do anything but sit in his seat (or our lap) for more than 2 seconds.  Ha!  About where my expectations fell for how he'd act. 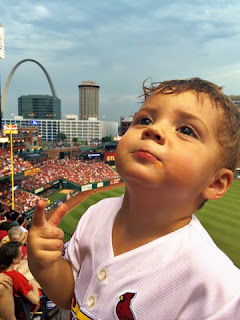 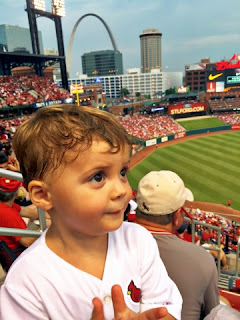 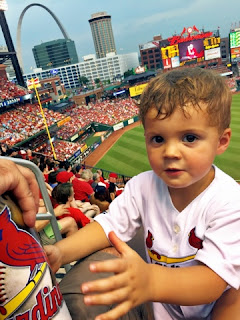 Again, he didn't want anything to do with looking (or smiling!) for a picture for me.  So nice of him.  We got some nachos and a drink and that kept him content for a bit--until we all woofed them down.  He was then getting super wiggly and squirrely and kept running into the people in front of us.  So, I yanked him up and hoped he'd sit on my lap and watch the game... 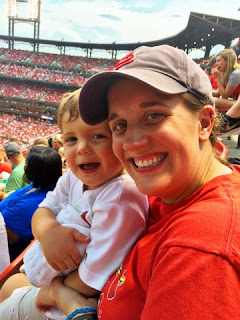 He's actually screaming in this picture for me to let him go.  Lovely.  So I resorted to my last-ditch effort to see if he'd sit for a bit longer (we were hoping to make it to the 4th inning!)...I whipped out his beloved "monkey". 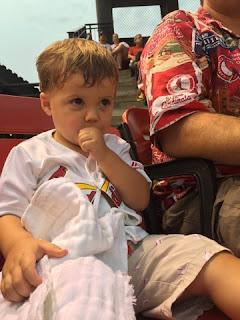 Success!  For literally 3 minutes.  In went the thumb, and quiet and focused goes Patrick.  But, it didn't last, and just as the 2nd inning was ending, we swooped up Patrick from whacking the back of the people's heads in front of us and plopped him back in the Tula on Mike's back, and waved our white flag and called it quits. 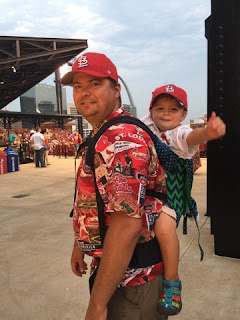 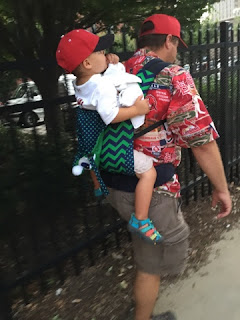 Again, Tula for the win.  I cannot emphasize enough how much I love this thing and how much it has saved us (for both Patrick and Rosie) when we're out and about.  Seriously, if you have little ones, get one of these.  You won't regret it! 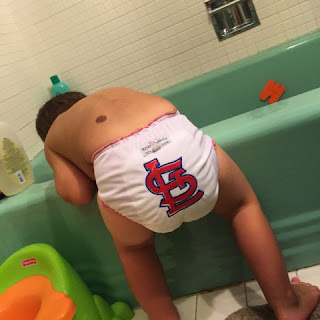 We did get Patrick some ice cream on the way home (cause he was about as good as we expected him to be!) and he was in bed only about an hour after he normally was.  He did wear his custom STL Cardinals Applecheeks dipe this gal made for us to the game, and since he had his "bayball shorts" on over it, I had to snap a pre-bath pic of him wearing it before he got full monty.

All in all, it was a fun night and a great experience for us and Patrick.  I don't know when we'll take him back again...but I know we will sometime soon...well, maybe next season when he's a bit older and his attention span is a bit longer :)
Email Post
Labels: baseball first game milestone Patrick St. Louis Cardinals