Thumb Sucking and Other Fine Things.

So last week I went back to work -- and will be back this week too again before I have another couple weeks off before the school year officially starts -- and it actually went surprisingly well.  Although I don't officially start until August 3rd, it has been sort of nice to ease back into what going back to work is going to feel like.  Don't get me wrong, I miss my bambinos more than anything, but since I will be going back full time anyways it's nice to sort of feel out how that is going to go (and we all know how crazy our lives are thanks to Mike's schedule).  Anyways, it made coming home in the afternoon to my chalupas all the more better. 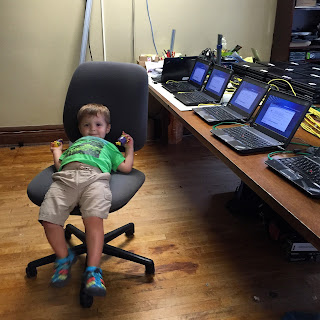 Patrick and my mom brought me lunch one day last week and he was overly helpful {not} with my computer imaging task.  I think I spent more time chasing him around telling him not to touch those oh-so-tempting computer buttons than eating.  Ha.  Life with a 2 year old. 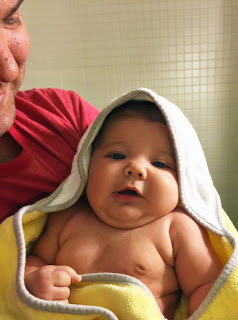 I snapped this pic after bathtime last week and it just melts my heart.  I wish I'd have gotten more of Mike's smile in it, but oh well.  It is just so darn cute to see how he looks at his little girl!  My mama heart definitely exploded with this.  And, it is SO SO SO nice having Mike home in the evenings to help with bath and bedtime routines.  He's been helping at night (since he's been on days for the past 3 weeks) and it's been AWESOME.  We tag team baths and Mike feeds Rosie a bottle before she conches out.  BUT, he goes back to nights today (wahhhhh!) and that means it's me flying solo for baths and bedtime for the next 3 weeks unless Mike is off work.  This is no easy task.at.all.  Rosie decided she will only take a bottle from anyone but me, so even if I try to give her one she refuses to take it and I've got to nurse her...which is fine, but we've always (even back with Patrick) liked giving them a big bottle (lights out!) right before bed because they would sleep better it seemed.  However, I nursed her before bed on Saturday (Mike had a bachelor party) and she slept from 8pm - 4:30am so I guess nursing worked?!  Butttttttt, we gave her a 7oz bottle last night before bed (and then I topped her off, as Mike says, by nursing her a little more) and she slept from 8:30pm - 6:30am!  So, who really freaking knows. 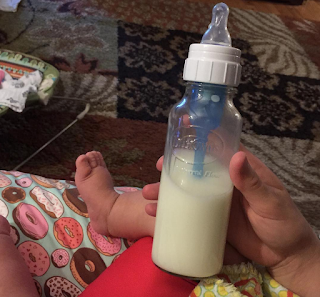 I did get some of these nifty Dr. Browns glass bottles to give a whirl too.  My good buddy Ann has some covers for them she's going to give us (I do worry about breakage and liquid gold spillage) so I'm jazzed about that.  My mom seems to hate plastic anything so I'm sure she'll dig these. 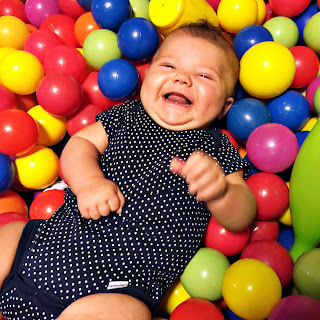 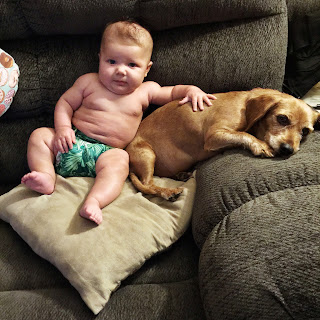 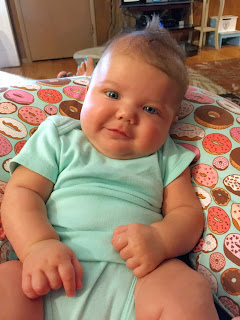 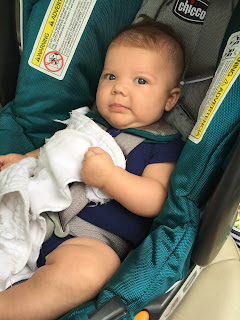 This girl.  Oh my.  Does she have some amazing expressions!!  They just KILLLLL me.  I mean, I know I'm biased, she's my kiddo, but shoot.  Girlfriend can go from the biggest giggly grin to RB face in a split second.  Oh, how I love her so.  I cannot wait to watch her little personality develop even more as she gets older! 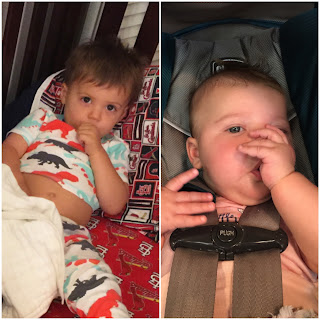 Mike and I now officially have TWO lefty thumb suckers!  Both of these kiddos we tried to give a pacifier to (you name the brand and type, we tried it.  They would not take it!) and they won't have it.  BUT!  Both of them, right around 3 months old, found their left thumbs and have been self-soothing ever since (2 years for Patrick, about a week for Rosie!).  I know everyone says how hard thumb-suckers are to break, they screw up their jaw and teeth, yada yada yada.  Whatever.  I sucked my thumb till I was like 10 (not kidding) and my mouth and teeth are fine, thanks to 2 years of braces...which I'm sure my kiddos will have to have (who doesn't get braces nowadays?!).  Plus, I think thumb-sucking looks oh-so-cute and a lot cuter than a pacifier :) 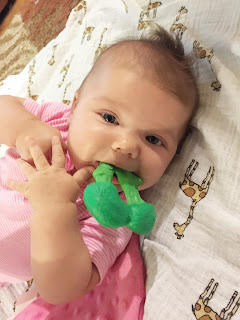 Rosie still hasn't rolled over.  Shocker.  Girlfriend is almost 17 pounds--that's a lot to roll!  I think by 4 months Patrick finally rolled over, so hopefully Rosie will too.  We've been practicing, but she's not having much of it.  She'll go on her side, but much prefers the beached whale look on her back.  Whatever.  I'm not pushing it nor worried.  She'll get it when she gets it.  And I got her a lovely new teething toy (she's not teething yet!  Just being proactive!) of broccoli and she obviously is enjoying it very much. 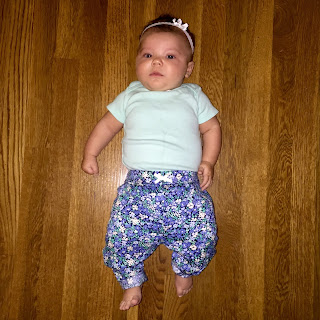 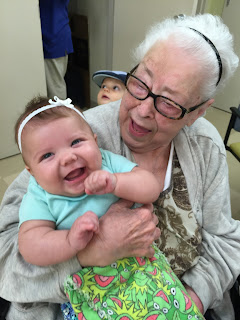 We went up and visited Goose one evening last week and Rosie had to wear pants...in the middle of July...because it was 65 degrees out!! WHAT?!!!  Not kidding.  I told Mike walking into the Pond that it was "kinda chilly out."  We've had some insanely crazy weather lately (so.much.rain.) and last week was a new one: pants in July!  Crazy.  This week we'll probably see 100 degree temperatures and 110 head indexes.  Yee haw.  That's even too hot for me to take the kiddos to the pool I think.  Gahhhh!  One extreme to another.  Thank you STL weather for always keeping us on our toes. 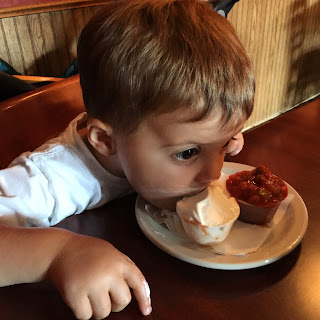 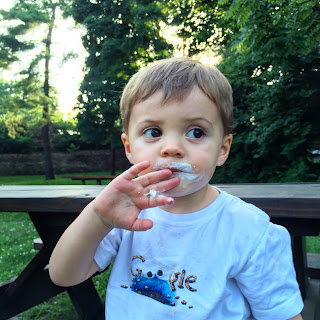 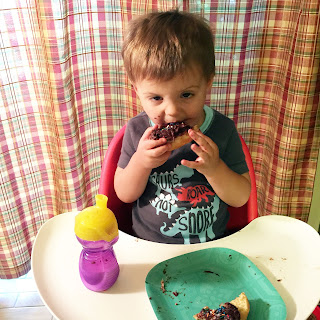 Let's talk about Patrick's eating habits for a minute.  We all know this kid puts ketchup on anything.  However, this past week we've seen him eat sour cream straight from the container at a restaurant, eat an ice cream cone using his hands, and make some crazy-intensely-focused face while eat a chocolate sprinkle donut.  This boy sure loves his food...a lot....and has the facial expressions to prove it. 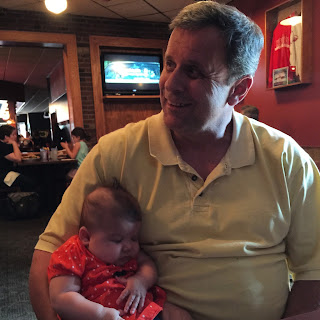 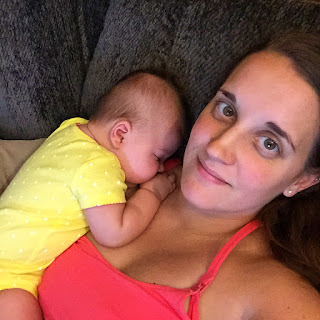 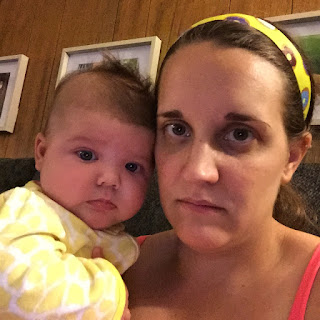 Cause who doesn't like selfies with Rosie?!  She apparently is quite comfy nestled in the arm crock of my dad (or "Ray" as Patrick calls him), and I can't resist late afternoon snuggles with my favorite girl!  Plus, we both had to practice some RB faces last week--and, as much as I tried, I cannot master as good of one as she has.  Gahh, if looks could kill! 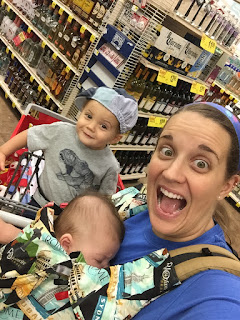 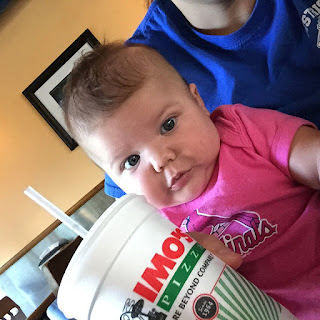 Mike worked days yesterday so I took the kiddos to the grocery store, and had to snap a "Tula in the Wild!" selfie to send to a friend--because we're too chicken to say it out loud to anyone, but texting it to each other works just fine.  (And if you have no idea what I'm talking about, go read this.) 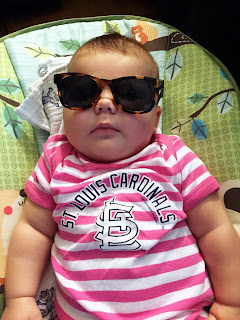 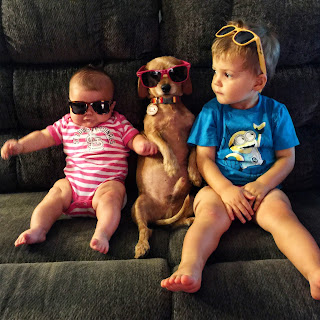 And, since I get kinda bored (sometimes!!), I always resort to taking fun pictures of my kiddos.  This past weekend had two themes: sunglasses and cloth diapers.  I am so glad they are happy willing (most of the time!) participants for me! 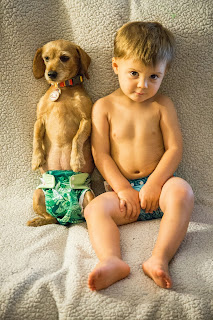 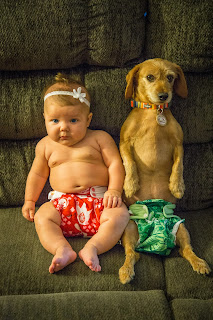 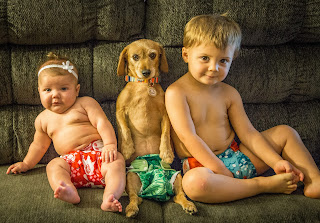 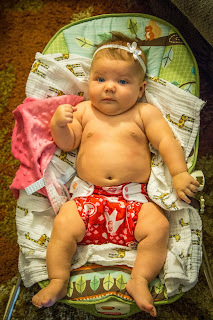 And, I'll close this all-over-the-place-photo-dumb-rambling-blog-post with this little gem from last night.  OMG.  I dieeeee.  So, story behind it: Patrick's new thing is to climb on the built in table thingy that connects our sectional sofa.  Obviously we are always telling him not to climb on it or over the back of the sofa, and most of the time he'll listen and get down...and then climb back up there 2 seconds later again (ahhhh, life with a 2 year old).  Lately he will climb up to turn on his iPad, but has noticed my old iPhone 4S I reformatted and keep all of Scooter's social media happenings on (because it's just too much of a hassle to have to log out and log in using my iPhone all the time) and goes up there and grabs it and pretends to talk on the phone.  We always ask him, "Who are you talking to?"  And he always says, "Nee Nee" (my mom).  Lately he will grab it and full-out lounge up there on the shelf to talk.  So, last night he did this and I managed to snap a pic of him in his mermaid-like state and whip up a little meme for it. 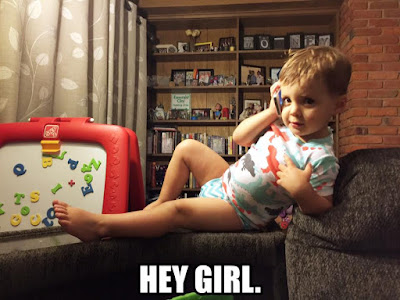 I can't stop laughing at it.  Mike posted it and it got quite the response.  Glad everyone else got a giggle out of it too.