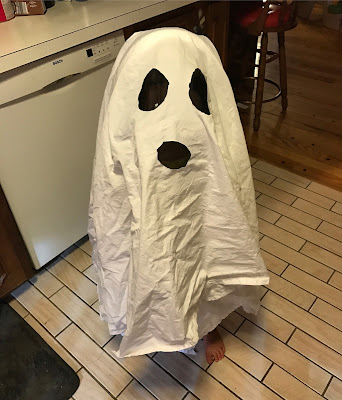 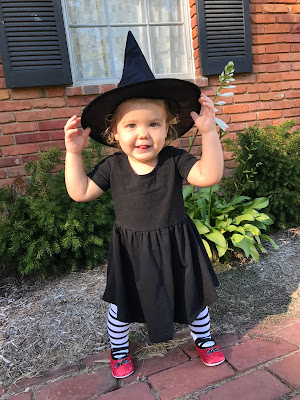 I posted a month or so ago about the kiddos' Halloween costumes: Patrick wanted to be a ghost (so I made him a cute little ghost costume!) and Rosie didn't argue with me when I told her she was going to be a witch...so, there are their costumes! 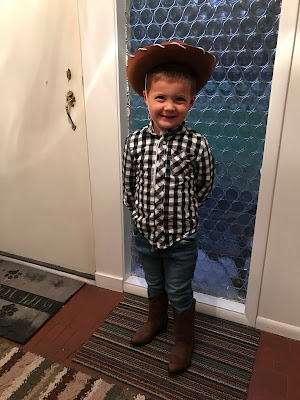 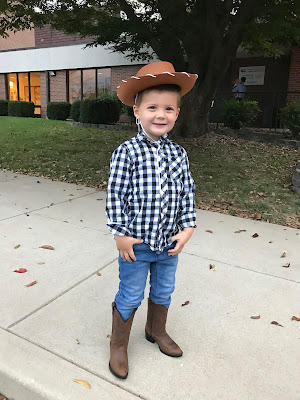 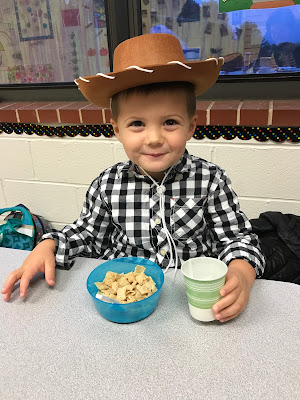 However, for school on Halloween Patrick's class was dressing up as cowboys or cowgirls, so he got to wear his cowboy outfit (which ironically we had all of this stuff already, so win win we didn't have to buy anything!) to school.

He was so excited when I dropped him off to be in his cowboy duds (and same with some of his friends too!) and that he also got to wear his ghost costume trick-or-treating that night too.  So win win on that account! 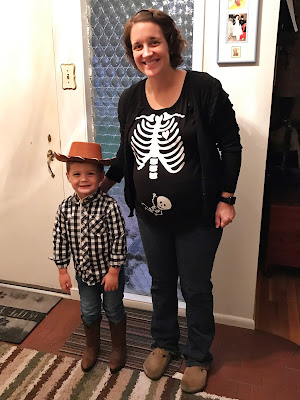 Patrick and I got to both dress up for Halloween at our schools this year...he looked way cuter than I did.  I'm so not creative in my costumes that I take the easy way out 2 pregnancies in a row.  Haha! 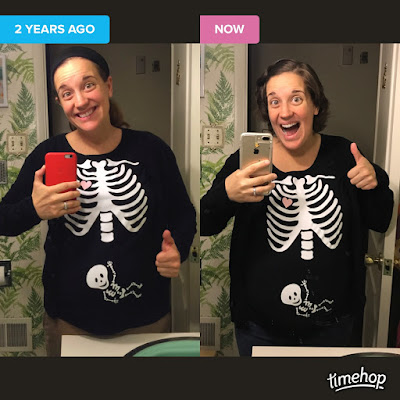 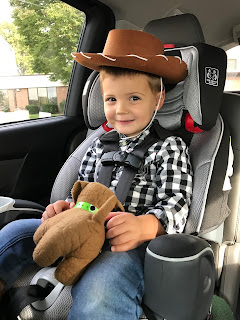 Anyways, after I picked Patrick up from school and he told me all about his day -- including that he kept his boots AND hat on ALL DAY LONG.  He also got a ton of treats from his classmates (oops.  We didn't send any. #badparents) and his teachers!  We headed home and hung out for a bit before continuing our yearly tradition of taking some sibling snaps (Scooter included!) for costume pics and then heading out to dinner and trick-or-treating with our buddies the Rosenbergers for the third year in a row!!

Spoiler: we bought 3 pumpkins this year to carve.  Butttttt they got taken to my inlaws a couple weeks ago for mini-session props and we forgot to bring them back...sooooo...no pumpkin carvings for us this year.  Oops.  We suck with that tradition apparently cause last year was the only year we've done it.  Maybe in 2017 friends! 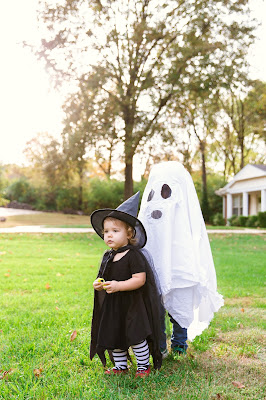 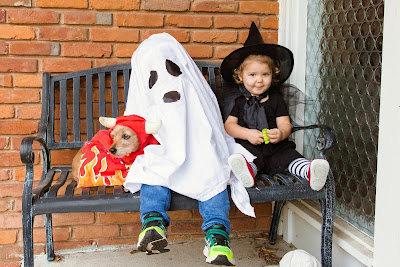 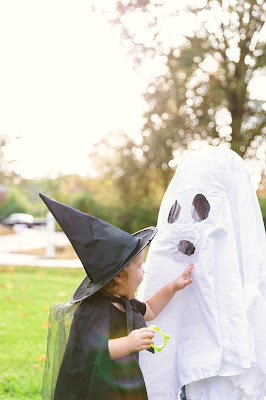 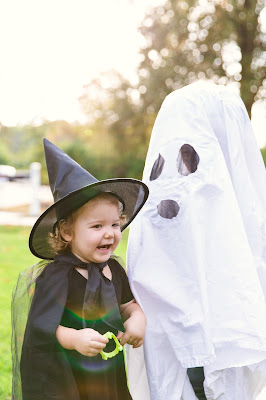 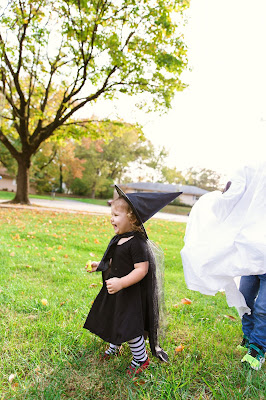 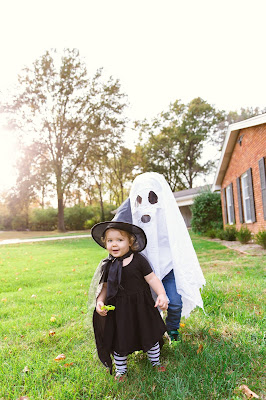 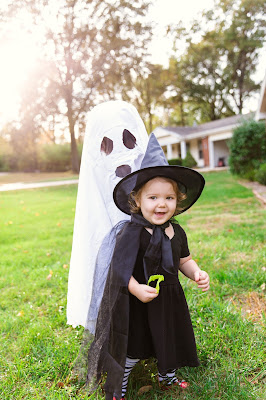 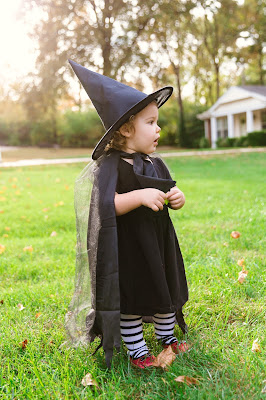 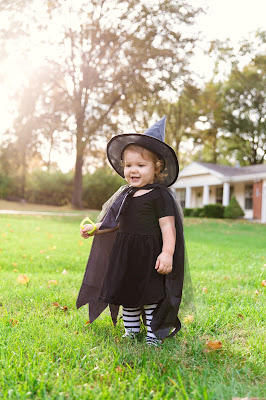 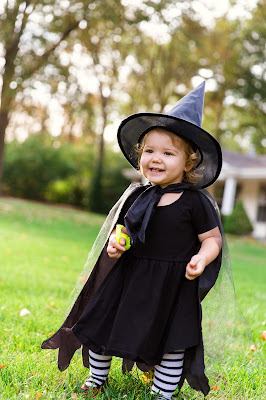 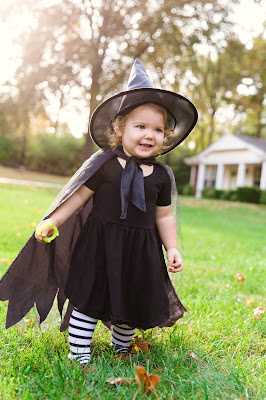 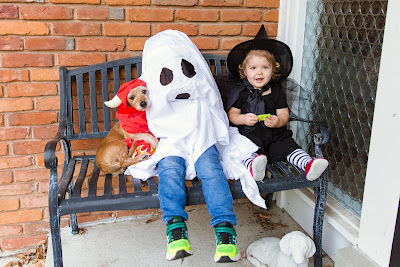 I tossed the kiddos in their costumes and let them pose for a few sibling pics on the bench before letting them play in the yard for a bit before we woke Mike up and headed over to dinner and trick or treating. 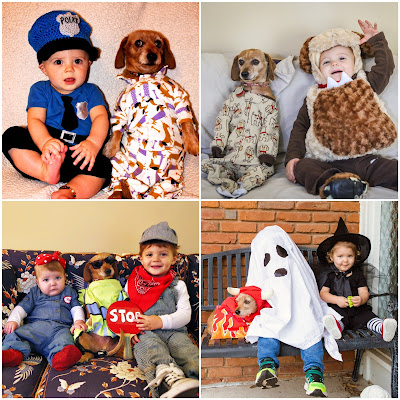 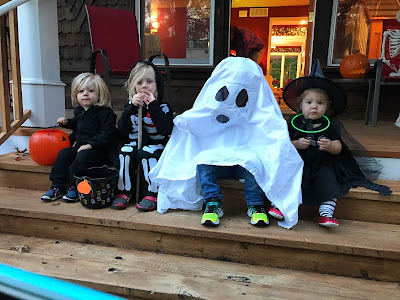 Year 3 trick-or-treating in the books!  Patrick had an absolute BLAST with his buddy Rory (they are literally 2 peas in a pod!) and Rosie actually understood what was going on and was so good about going up and getting candy and putting a piece in her bag and saying "thank you" (which sounded more like "tank poo").  It was an absolute blast! 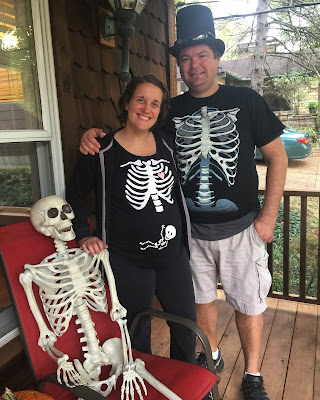 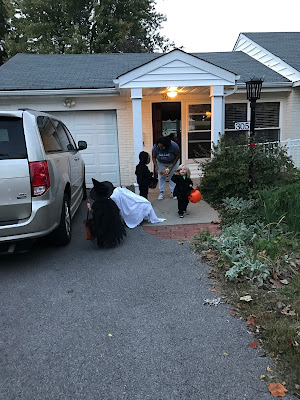 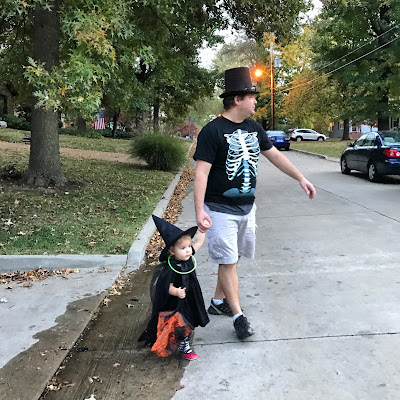 These were the few actual trick-or-treating pics I snapped because holy toledo it got dark fast and I wasn't even going to attempt to try and snap any in the dark with these fast moving subjects I call my children.

After trick-or-treating we stopped by my parents to say hi to them and Goose and Kate who were there too (and had treats for the kiddos!) and then headed home for baths and bed.  It was a fantastic Halloween that both kids (Patrick especially since he really understood what was going on this year!) enjoyed.  We cannot wait to celebrate the upcoming holidays with these kiddos AND to see what Halloween in 2017 brings!