The other night I realized all of the kiddos had footie jammies on post baths and I was like 'seize the moment alex' and grabbed my camera cause DUH we needed to document this adorableness.  Annie wears footie jammies most nights but the big kids are hit or miss with wearing them so I took it as a rare opportunity when they all had them on to snap a few pics...and Scoots had to join in on the fun too. 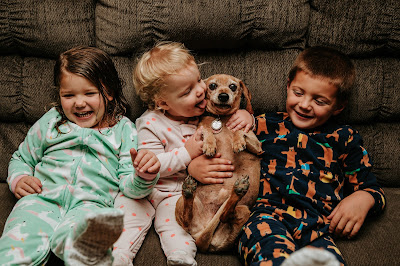 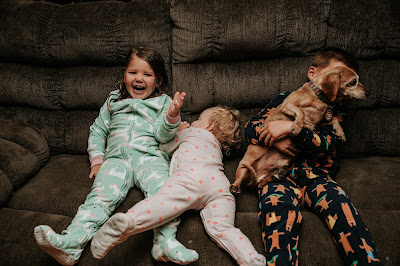 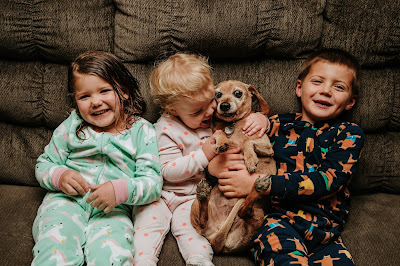 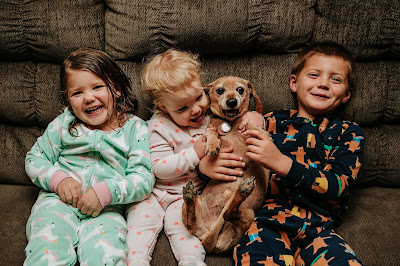 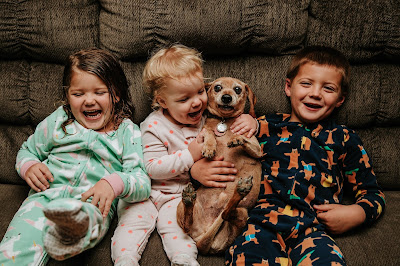 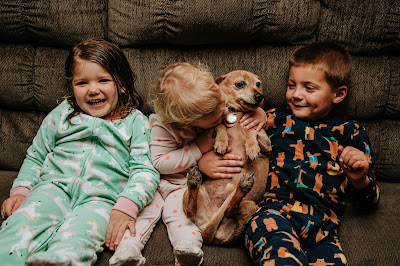 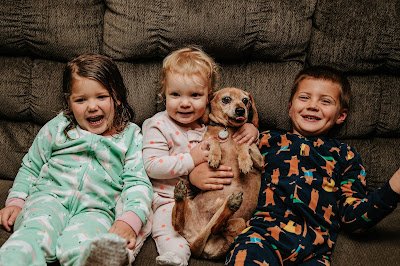 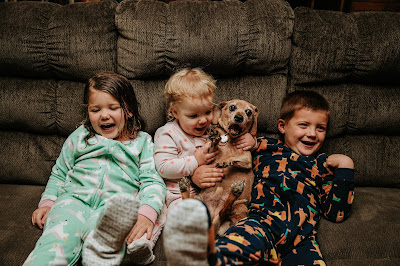 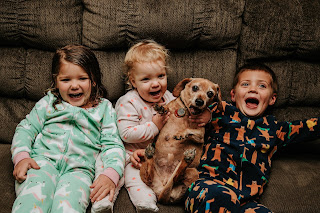 I was DYING over these.  First off, Scoots wasn't having it I don't think but was being a good sport per-usual...and Annie was alllllll about the Scoots-lovin' and wanting to snuggle and heck even lick (!!!) him in the pictures and it was just a hilarious result. I posted it in a few photog groups I'm in and they thought it was pretty darn funny too.  Oh how I love these kiddos of mine!

Ro has been my trusty sidekick on school pickup duty lately and she's even gotten a bit brave and venturing away from me to go play by the trees and such closer to Patrick's school!  She gets so darn excited when he runs out (mental note: need to record that sometime soon) and it's just the cutest thing ever. 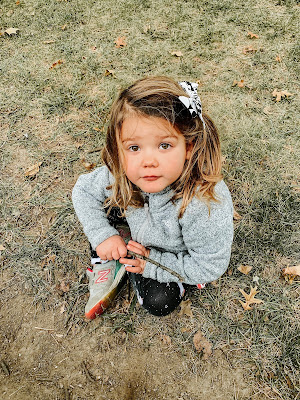 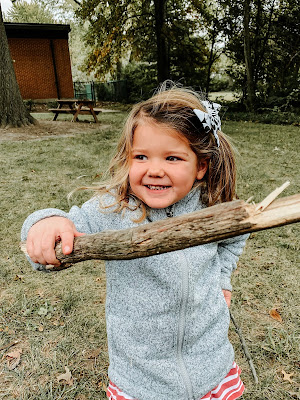 So we have gotten some treats dropped off recently from friends and family (which has been awesome!) and the kids are totalllllllly enjoying all of the yummy goodness that has come into our house.  These chocolate covered pretzels from Sweet Be's are just their favorite! 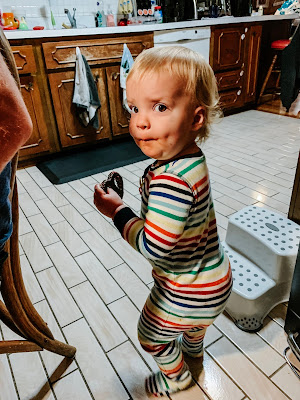 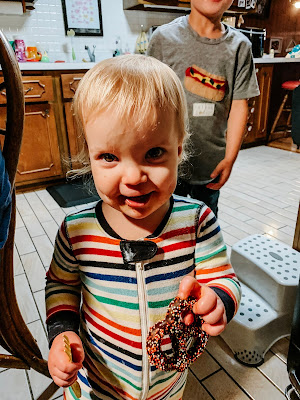 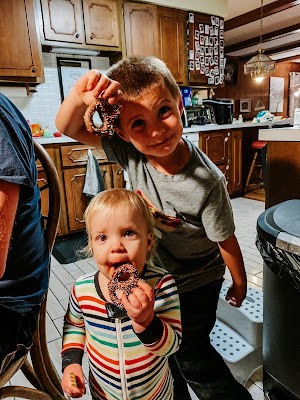 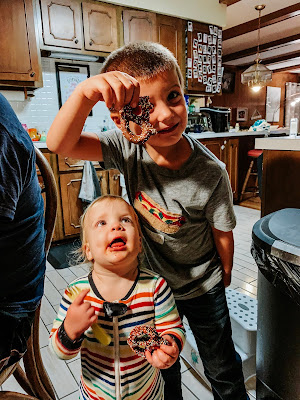 On Friday Patrick had his Halloween parade at school and he was HAMMING IT UP!  I stole away while the girls were snoozing (thank you Kate for coming over to stay with them!) to head up to his school with my mom (Mike had an ill-timed dentist appointment) to see him in the parade!

Now, I want to note it was 45 degrees and misting rain and I sent him to school with a sweatshirt AND another coat to wear over it yet what does he walk out in?! Just a t-shirt!  Oh P!  You are ALL BOY, aren't you?!?!? 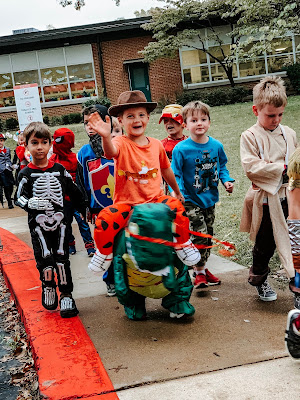 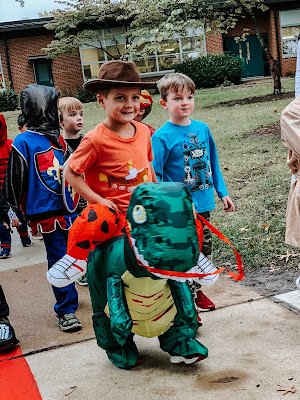 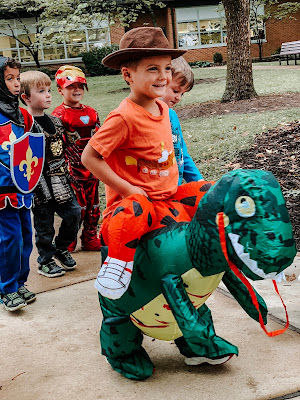 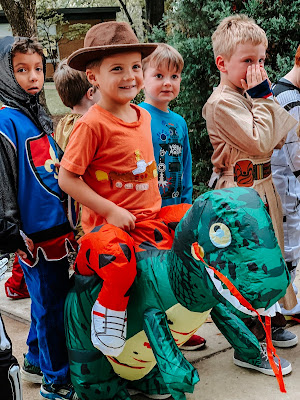 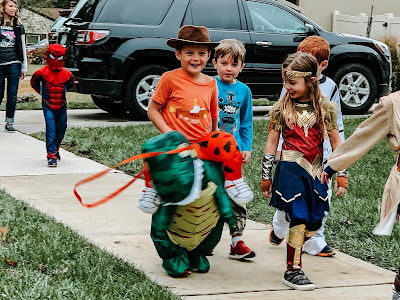 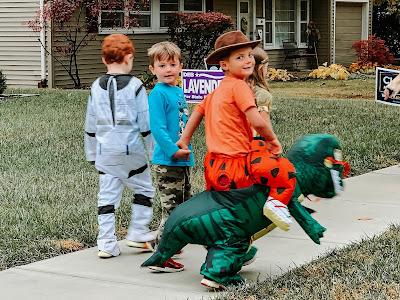 He seriously had the biggest smile on his face for the entire parade and was just beaming about his costume!  And I had the biggest smile on my face watching him go by because I am incredibly biased but dang it he is so darn cute!!  He just had a blast at his parade and school party and cannot wait for actual Halloween next week to wear his Indiana Jones ridin' a dino costume again!  I'm sure I'll have a whole 'nother Halloween post for you guys next week after those fun festivities...just you wait :)
Email Post
Labels: Annie costumes family family fun halloween halloween parade kindergarten Kirkwood parade Patrick Rosie Scooter