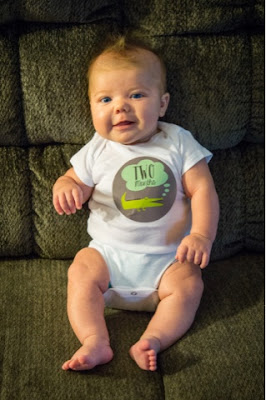 Miss Rosie Mooney is TWO WHOLE MONTHS old today!  I cannot believe how fast it's going.  She'll be 9 weeks old on Monday and it really doesn't feel like it's been 9 weeks since we welcomed her into our family!  Gah, it really is flying by...and I know I sound like a broken record saying that, but lordie is it true! 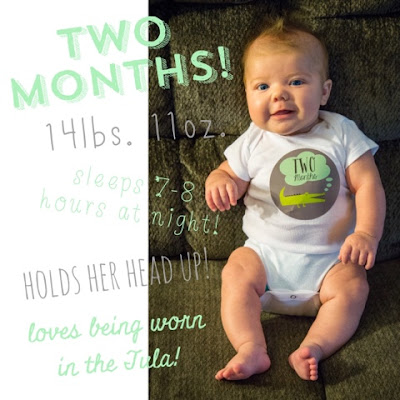 I didn't do these weekly pics with Patrick (regret!  So much regret!) but am doing them every Monday with Rosie as she turns another week old.  I totes stole my buddy Tiff's idea but I'm loving it--I love seeing the small, subtle changes in her every week, and then like doing these more formal monthly growth posts and sticker pics for the seemingly more drastic changes by month. 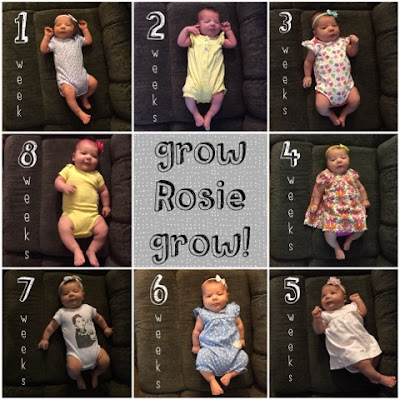 So I freaked everyone out on Instagram earlier last week posting this.  Yeah, no, not pregnant AT ALL.  Ha!  It will be a while before that happens again...well, maybe not too long--I totally want a third! :)  But I thought it was fun to do a pic of Rosie at 7 weeks holding her pic of when she was only 7 weeks cooked and the size of a gumball. My oh my hoe she's grown, eh?! 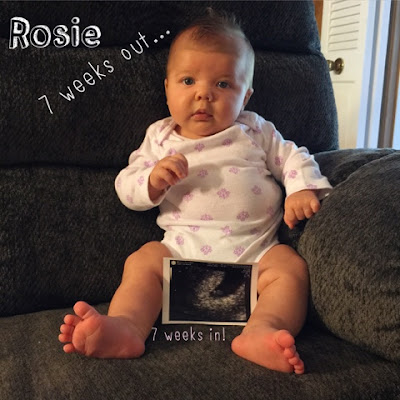 Anyways, so we have Rosie's two month checkup next week, but I wanted to go ahead and fill you in on the mom stats of what this little lady is up to at two whole months old.  You live for these little monthly posts, don't you?!  I thought so. Here it goes:
Gahhhhh, so fast it's going!  I thought about this the other day: she's 1/6th of the way to her 1st birthday!  Yes, that doesn't seem too close to being one, but it surely does to me!  It seriously feels like yesterday I was writing her birth story and now she's TWO whole months old.

You all know I'm a sucker for comparison pics, so here's Rosie from 0 to 2 months old.  My how she's grown and changed, huh?! 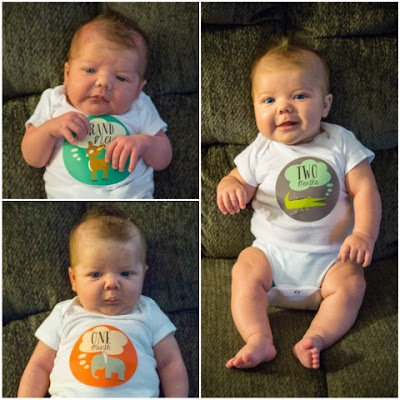 And, twist my arm again, but here's a lovely little comparison pic of Patrick at 2 months and Rosie at 2 months.  Gah, I love these two little burritos so much! 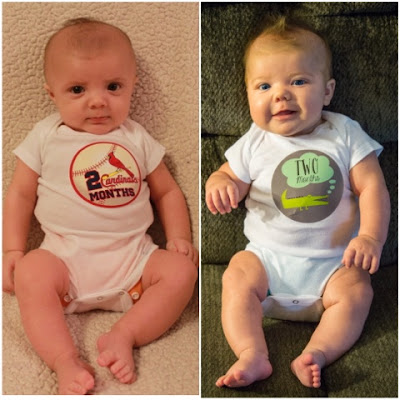 That's about all I've got for Rosie's two month report.  I am just going to assume that this next month is gonna fly by so I won't be whining next month about how fast it went (gah, who am I kidding.  I will forever be whining about how fast time is going with my kiddos!  It's never slow, always speeding by!).  Have a good one friends--hug those loved ones tight and enjoy each minute, cause it really does go by wayyyy too fast!
Email Post
Labels: 2 months old growing milestone Rosie update