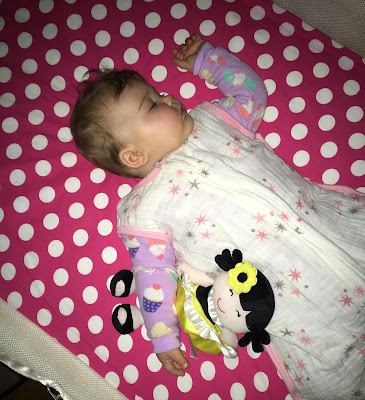 Each kid is different.  This is something that I rolled my eyes at hard core before Rosie came along and I really thought that my next kid (or heck, kids) would be little clone replicas of Patrick and what he does...cause they're all coming from the same genes, right?!  WRONG!  Oh, how wrong I was!

But I know this now: I know each kid, even though genetically from the same mom and dad, can be the same in many regards, but also are very very different.  I see so many similarities between Rosie and Patrick, but I find myself more struck by their differences!  Funny how life works like this, isn't it?!

Anyways, Patrick is a fantastic sleeper, and always has been since he was 3 weeks old and started sleeping 8 hours a night (and then moved that to 12-13 hours a night at 8 weeks old).  He's never looked back!  I can count on two hands the times he's woken up in the middle of the night (like between 9pm - 8am) since he was 8 weeks old, and I'd say 75% of those were because he was sick (ohhhhh, The Plague...I haven't forgotten your awfulness).  He just loves to sleep!  And he will even ask to go lay down for a nap if he's tired or tell us he wants to go to bed because "I tired."  It's pretty awesome.

I told myself from the get-go that #2 wouldn't be nearly as good of a sleeper as Patrick...to prepare myself.  I hear sleeping horror stories from friends and online mommy groups about kids who don't sleep so I was preparing myself for that.  However, I knew a few things that I wasn't going to do that parents sometimes fall into doing (co-sleeping, rocking the baby to sleep, etc...--and no judging! you do whatever you feel is best for your kiddo!) that makes bedtime and sleeping a nightmare.  We always had Patrick in his own bed/crib since he was born, and never ever put him to sleep already asleep--we always put him down awake so he'd learn to fall asleep on his own.  These were things I wanted to do with #2.

Well, Rosie came along and, sure enough, girlfriend was way different than her brother!!  Once we got through the newborn stage and she was consistently sleeping longer, I noticed right away that she was unlike her brother in one big way: she liked her mama's milk straight from the source!  (Patrick got the boob until about 3 months, then got pumped bottle milk until his 1st birthday)  I noticed that she would wake up randomly in the middle of the nights sometimes to eat...and, mothersucker over here would go pop a boob in her face half asleep myself and feed her so we could go back to sleep.  And she would always go back to sleep after eating...she just wanted a snack.

Well, this wouldn't happen all the time, just randomly.  So weird, right?!  She would sleep some days from 8pm - 8am...and other days be squawking at 2am for a snack.  This was around 5 or 6 months, so plenty old enough and I knew she didn't NEED to eat, she just wanted to...but I was a sucker and would go in and feed her so we both could go back to sleep.

Around 8 months when we started giving her solid foods she started waking up less and less at the 2/3am mark and more around the 5/6am mark...which was great!  She was going a good 10ish hours of sleep before waking up, would eat for maybe 10 minutes, then back asleep for another 2-3 hours.  She's as regular as a swiss watch!  BUT, there would be random times when she would wake up at 2am wanting to eat...and honestly, it was getting old, fast.

Just after the new year Rosie turned 9 months old, and I put my foot down...cause she is old enough to know what she's doing and know that if she cries she gets a boob...and she wins.  Well, as much as I am in denial about it, we are now only about 2.5 months away from her first birthday (WAHHHH!) and I decided enough was enough.  I am putting my foot down and enacting

This rule means that if Rosie is heard squawking before 5am, she gets to (judge away, parents of the year you are!) cry it out.  GASP!!  The horror, right?!  Well, too bad.  Rosie is learning that unless it's after 5am, so that she's been in her crib for 9-10 hours, she doesn't get to eat.  And you know what?!  Since enacting this rule, we've had a couple 2/3am screaming episodes, but they only last maybe 10 minutes before she falls back asleep...and usually falls back asleep until 7am or later.  I guess you can say I'm training (sleep training?!!) Rosie to stay asleep until 5am (or later!) because 1. I don't want her to get in the habit of knowing (yes, only 9.5 months old she is but she KNOWS, trust me!) that she can scream and get what she wants and 2. I need to start weaning her off of the boob at some point, so we're starting with random middle of the night wake ups.

I do still classify Ro as a great sleeper -- she really is!  Heck, I put her down happy and wide awake at 7:30pm every night and she's asleep within 10 minutes with minimal noise made.  And most nights she'll sleep until 5:30-6:30am (so 10-11 hours!!) eat for 10 minutes, then go back to sleep without a peep until about 8:30-9am.  I mean, that's a pretty freaking good sleep schedule, right?!  Heck, I usually get a good 7-8 hours of solid sleep myself on a school night, so that's pretty amazing in my book with a 2.5 year old and a 9.5 month old.  I'd love to drop the 5:30-6:30am feeding eventually too, but I'm telling my anxious self to calm down on that and just accept that she may not be as golden of a sleeper as Patrick...so I'll take what I can get :)

I am proud of myself (and Mike too, for not caving and giving her a bottle!) for not going in and giving into her at the random (maybe once a week/once every 10 days) wake ups.  I guess I should add that when we do hear her randomly in the middle of the night I flip on her camera to make sure she's not hurt or stuck or anything before I just let her keep squawking.

My whole point in writing this post is to hammer home to future Alex (or heck, maybe any of you out there who have no kiddos or just 1 and are thinking the same thing as I first did that all of your kids will be the same. {{giggle}} ) that each kid really truly is different (and that's okay!!).  I love both of my burritos so much, even if they aren't sleeping clones of one another :)
Email Post
Labels: Rosie routine rules schedule sleeping