I'm scared to even write this post, for fear of jinxing myself, but holy awesomeness big boy bed happenings this weekend!

I wrote a few days ago how I was scared and anxious and allllll that about switching Patrick to a big boy bed, mostly for fear that he 1. wouldn't sleep 2. run a muck in his room 3. destroy things 4. change from being a great caged sleeper to an awful free roaming one ...and may more things. 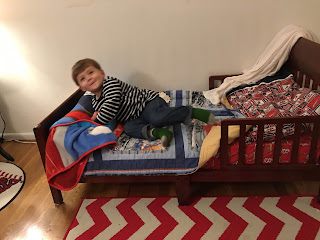 After we picked him up from Papa Rick's on Friday, Mike and I took him home and told him we had a big boy surprise for him.  Pardon the blur of the above picture, but this was his excitement face when he saw that his crib was gone and now had a big boy bed!  He truly was (and still is!) so excited about his new sleeping space!

Friday night after baths and putting Ro down, it came time for Patrick to watch his one episode of Paw Patrol, as is his nightly jam, and then go to bed.  I.was.nervous.  SO NERVOUS!  I kept reiterating over and over to him, "You do not get out of bed until mommy or daddy comes and gets you.  If you need something yo call for us, you do NOT get out of bed."  I swear I said this a dozen times!  He kept saying, "Okay mommy."  and then was lovin' on his new Paw Patrol blanket (bribe) that we got him for his new bed. 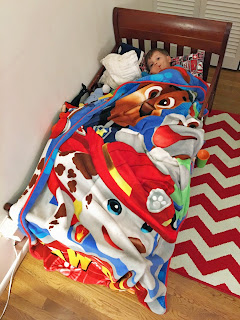 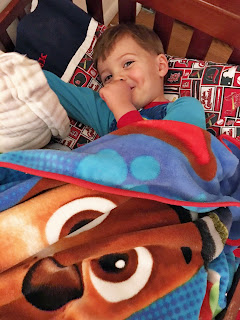 I snapped a few pics of him all snuggled in, we turned out the lights, and BOOM.  Night 1 was on!  I was glued to the video monitor for the next hour or so.  He shockingly did amazing.  He called for us once (more water), and that was it.  NO attempts to get out of bed, and even though it took him a bit longer than usual to fall asleep, he did!  And stayed in bed all.night.long. 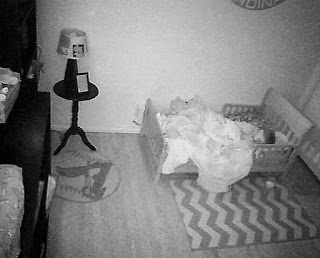 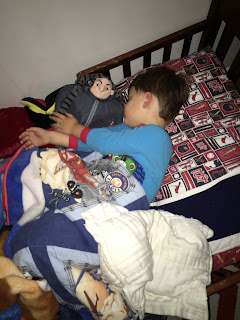 Of course I didn't sleep well because I kept waking up to check on him to make sure he was still in bed and not awake or sleeping on the floor, but it was for nothing, he really did awesome!  I was so proud of him!

When he got up in the morning he even waited until I physically came in the room and told him to get up!  He continues to blow me away--I guess my expectations of him were really low, so it was kinda easy for him to pass them up, huh?!

Saturday I was mildly worried how nap time would go in his new bed.  Again, I shouldn't have--it went great!  He fell right asleep no problems and stayed in bed until we came and got him up!  For both naps and overnight sleep he may play in his bed with his trains or read his book until he falls asleep, and does the same when he wakes up.  He does NOT like to be woken up, but will call out when he's ready to get up for good, so having these little toys in there are good things for him to help him either wind down and go to slumberland or slowly wake up and greet the day. 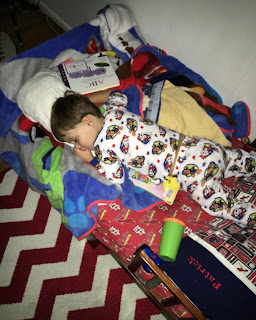 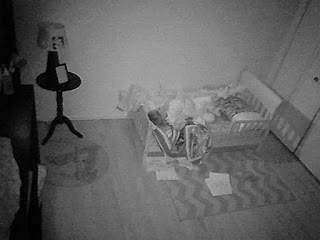 Last night went well too--although he doesn't get the head of the bed/foot of the bed concept, because for both nap on Sunday and Sunday night sleep, this is how he slept: the wrong way!  He didn't fall out of bed either time, so we just left him, cause, you do you, Patrick.

All in all, a few nights and nap times in, things are going amazingly well with Patrick and his new big boy bed!  I am so happy the transition was easy peasy and hoping and praying it stays that way!  I'm sure if there are any big changes, you'll be the first to know :)  Here's to continued great sleep in a new space for my big guy!
Email Post
Labels: big boy big boy bed exceeded expectations impressed Patrick proud sleeping toddler toddler bed